This fourth installment is packed with standalone stories and narratives connected to the wider Marvel Universe...for better or worse 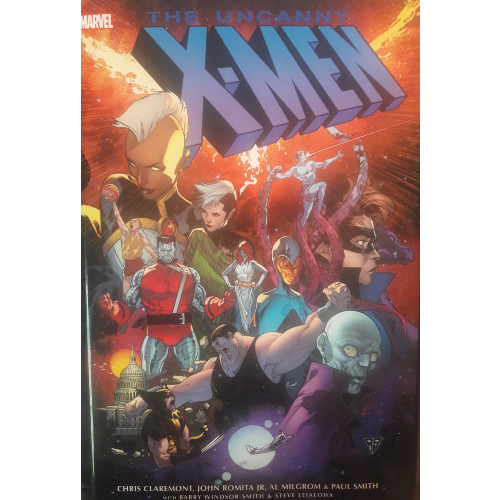 “Second Genesis.” “The Dark Phoenix Saga.” “Days of Future Past.” “God Loves, Man Kills.” “The Brood Saga.” Since 1975, Chris Claremont has, almost single-handedly, shaped the lives of the Uncanny X-Men, crafting some of their most memorable moments and staggering stories. His legacy, even less than a decade into his run, is a remarkable accomplishment for any writer; the fact he was able to maintain such wonderful quality during these years is further testament to his capabilities as a creator.

Through it all, his characters have grown in dynamic ways. Storm has come from a worshipped goddess to a hardened leader; Wolverine has turned into an honorable warrior; Colossus has become more comfortable with his position on the team; Cyclops has suffered love and loss; Rogue, who started as a villain, has become a full-fledged X-Men; and Kitty Pryde, once a child, has become an adult in every way but age. This ensemble cast generates and perpetuates wonderful arcs, always changing and always building.

Claremont’s continuity is wonderful, his stories largely self-contained and dynamically self-referential. Polite and agreeable with the tales of the past, Claremont is never scared of pulling his own stories back to the fore to weave additional conflicts or plumb narrative depths. This omnibus, we’ll see what happens when his own continuity brushes up against the happenings in the Marvel Universe at large. How does the world around the X-Men shape and reconstruct the team? 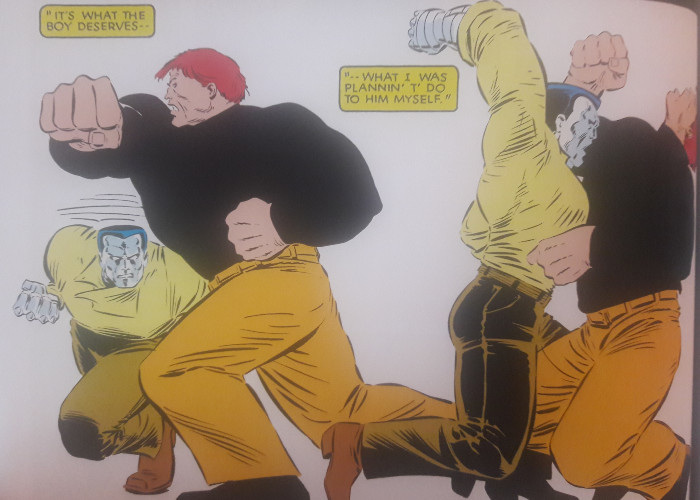 For the first time, Claremont is a slave to the whirring machine of the Marvel Universe. Up until now, his narratives have largely been situated in their own corner of the world, as the X-Men have undergone trials without brushing up against the rest of Marvel's comic book mythology. Maybe Spider-Man popped in for a moment or two, maybe a backup story featured a Storm/Black Panther team-up...but for most of his run so far, Claremont has avoided explicitly popping his mutants into the rest of the superhuman world. No earth-shattering, continuity-scattering events have affected or impeded his storytelling.

That all ends here. 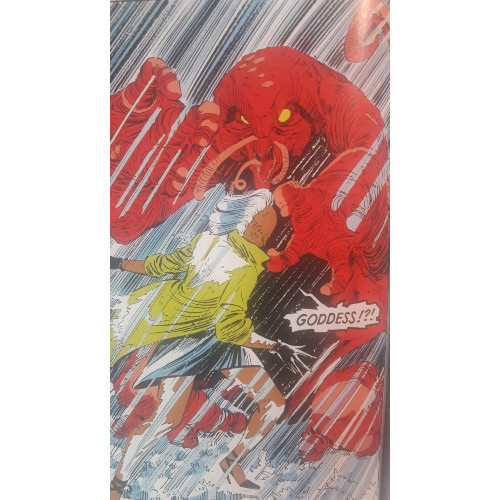 Marvel’s “first” crossover event, the original Marvel Super Heroes Secret Wars, whisks several of our mutant heroes (Professor X, Wolverine, Colossus, Cyclops, Rogue, Storm, Nightcrawler...okay, and Lockheed, too) as well as arch-foe Magneto away on a whirlwind adventure involving exploding planets and alien outfits. A later story becomes embroiled with the ROM the Space Knight-centric “Wraith War” story arc. A two-issue tale of Claremont’s creation drags in Conan the Barbarian enemy Kulan Gath and features several New York-based heroes such as Spider-Man, Captain America, and multiple other Avengers. Through all this, Claremont steers his characters accordingly, performing a careful balancing act between the demands of other creators and his own mounting soap opera story arcs.

The Secret Wars tie-in, importantly, sees Kitty and Colossus break off their relationship after Colossus fell for an alien healer named Zsaji on the Beyonder’s Battleworld in Jim Shooter’s limited series. I couldn’t tell you how Claremont handled the news of the breakup idea--one article I read specifically calls the relational severance “editorially mandated”--but the writer does his best to use it as a significant plot point. He doesn’t shrug his shoulders and toss the concept aside; Claremont wields the decision effectively, allowing the muddied waters to focus each character differently. Kitty, independent of her affection for Peter Rasputin, grows in her own right, becoming ever more a young woman aware of the varied strata involved in dealing with relationships (platonic as well as romantic--see her sisterly love for Storm as an example of the former); Peter is given a fabulous one-off issue where he simply discusses his emotions with Wolverine and Nightcrawler. Even a standout duel with the Juggernaut can’t remove the wonderful relatability of a couple of bros hanging out after dark, shooting the breeze and chilling. It’s great stuff. Claremont navigates the "editorially mandated" moment as naturally as he can, not letting it tear into his own plotting. He doesn't come across as a petulant child, shoehorning the plot simply because he must. He integrates as gracefully as possible, allowing the reader a smooth transition. 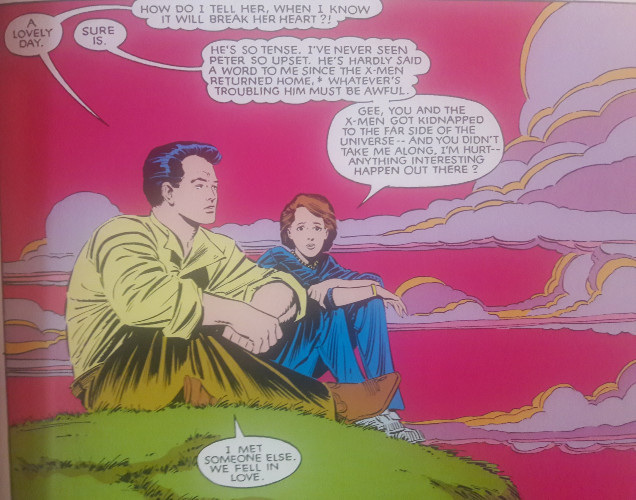 Elsewhere, Claremont uses the “Wraith War” elements well as he weaves a strong arc for Storm, who not only loses her powers (temporarily) but crafts a relationship with the mutant machinesmith, Forge. Barry-Windsor Smith provides stellar artwork for a standalone issue where, again, Claremont inserts bits of non-X-Men continuity in with his own tale. The villainous Dire Wraiths never become front-and-center, yet they provide ample conflict, physical manifestations of the emotional, intangible struggles his characters encounter. Thus, these larger stories within the Marvel Universe allow Claremont to propel his tales and characters rather than divert them. Some may be annoyed that the writer is forced to bow to the powers-that-be so often, but Claremont should take pride in his effective use of the tie-in narrative. 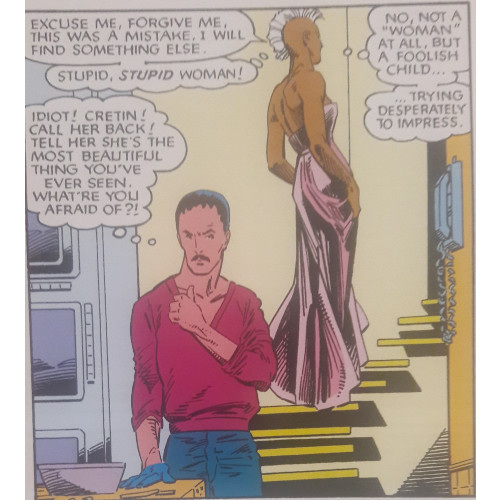 Slightly less effective is Claremont’s ability to weave in his own previous continuity, particularly bits that don’t fall strictly within the pages of Uncanny X-Men. The popularity of any franchise tends to demand additional stories for financial gain; thus, it follows that Uncanny X-Men birthed other spinoff titles to satiate a growing interest in Marvel’s mutants. As of this volume, only one such title existed--New Mutants--yet many more were to come (X-Factor, Generation X, Wolverine, Excalibur, X-Force, etc.). Despite the relatively streamlined nature of having only two titles, Uncanny X-Men and New Mutants, Claremont can’t wholly juggle both properly. The New Mutants pop in and out at random, showing up at odd intervals. I could totally forget that the team shared Professor X’s mansion before they showed up at some point, making me go “Oh! Right! The kids!” To his credit, Claremont uses the team in a way that doesn’t make their appearance feel like an advertisement for the accompanying title, but their inclusion doesn’t feel wholly organic. At times, their appearances feel more necessary for the current narrative--they play a huge role in the Kulan Gath two-parter and another late issue--but they otherwise can come across as a tad shoehorned. A single issue where the X-Men fight off the alien father of New Mutant member Warlock feels most egregiously out of place, as it fails to support any particular narrative Claremont has going on at the moment. 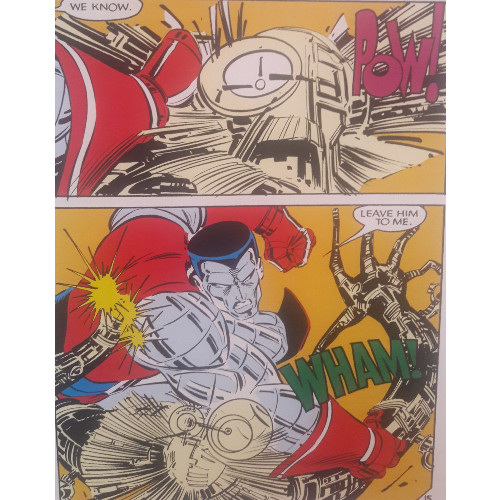 Yet, when the master storyteller relies on his own past character building, his plots and characters soar. A single issue that sees Rogue rescue a SHIELD agent she supposedly loved temporarily confuses the reader...until you realize she isn’t relying on her memories of the agent, but Carol Danvers’. Having previously absorbed Ms. Marvel’s powers and memories, Rogue undergoes a severe personality struggle as she becomes divided between her Rogue personality and Danver’s memories. Wolverine and Kitty grow stronger together during a limited series that sees Kitty take matters into her own hands as Claremont continually fashions her into a young, powerful woman; he readily has Kitty toe the line between child and adult, creating a character who is both strong on her own yet still dependent on the people she loves. Scott and Madelyne Pryor receive some decent development early on, their burgeoning relationship receiving a jolt as a young woman from an alternate timeline arrives. Claremont crafts a mystery around this new woman, Rachel...the daughter of Cyclops and Jean Grey, not Madelyne. Who is she? And is her reality our reality? If so, why? Isn't Jean...dead? 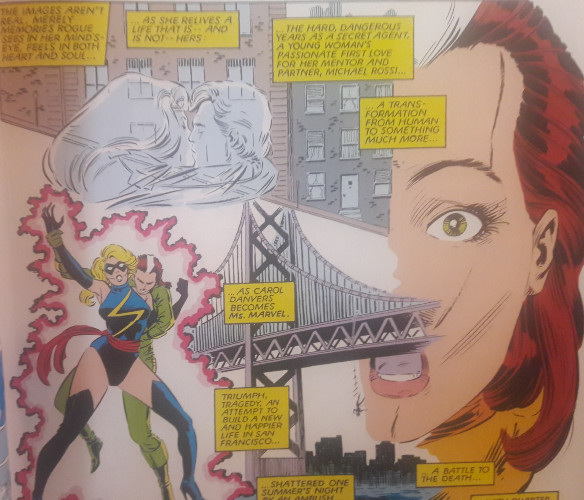 Every time a narrative ends, a new one begins with Claremont. As the Rogue story winds down, he picks up the story where Storm temporarily loses her powers, a tale which leads into the “Wraith War” issues. An X-Men and Alpha Flight limited series spins out of elements sewed previously, particularly Scott and Madelyne’s relationship. The Hellfire Club pulls itself from the wreckage of its former self and begins mounting membership anew, swearing revenge on the X-Men. And dancing through the background is an ever-mysterious promise of political change and a law which may affect the mutant community forever. Even pieces that look standalone are wildly interconnected, to either previous stories of Claremont’s or other overarching events.

“Dense” is a word to describe this volume, even though it’s the shortest Uncanny X-Men omnibus yet. A thrilling combination of art and narration propels our special ensemble to the heights of their careers even as characters feel some of their darkest lows. John Romita Jr. and Barry Windsor-Smith deserve special mention for their gorgeous artwork. Romita Jr.’s art takes on the shape of his more modern style, showcasing a transition of sorts, a somewhat “halfway point” between his earlier work and the art that I’ve always enjoyed. Windsor-Smith, though his contribution is small, leaves no minor impression. Gorgeously rendered, his artwork makes the Storm/Forge issue glorious, masterfully detailed and shaded perfectly, a blend of light and dark which lithely dances through the issue. 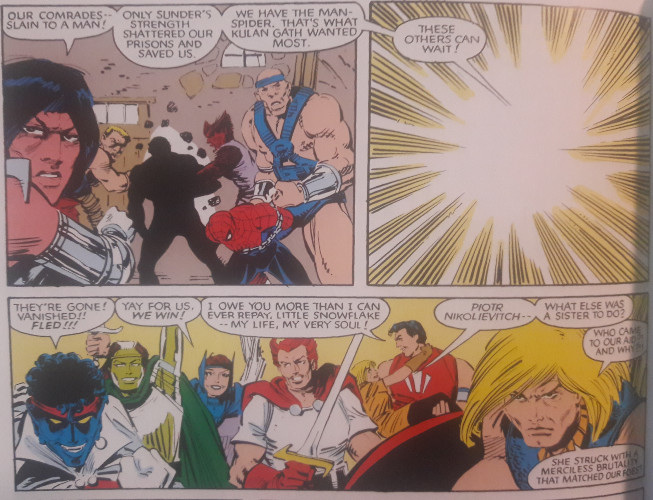 It’s hard to necessarily say that Claremont is still at the top of his game--his storytelling is as good as it’s always been, but though various impactful moments pervade this omnibus, you get the sense that he’s ever so slightly constrained. The freedom he was given in earlier years is not quite what it once was; his plots are somewhat dictated by the whims of others, and you feel that sense as you read some of these stories, despite Claremont’s best attempts to disguise the non-mutant elements. Through it all, Claremont’s characters come first--they win battles, lose loves, face heartache and personal trauma. They’re still as human as they have ever been, with or without their fabulous abilities. For right now, this seems like the last Uncanny X-Men omnibus, but several upcoming stories still abound--"Inferno," "Mutant Massacre," other titles--and I’m gonna do what I can to stay on top of the action. As long as it has Claremont’s name on it, I’m sold.