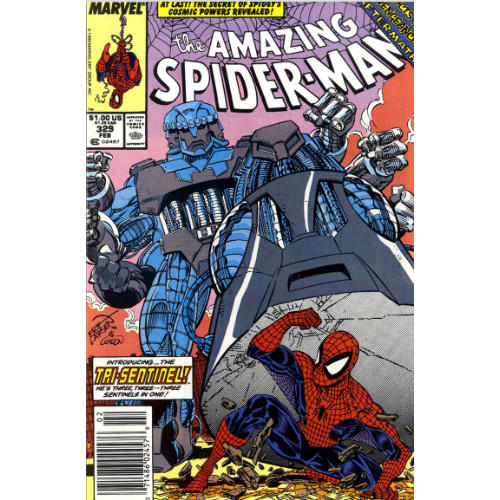 Breathe with me, won’t you? Take a deep inhale. We have reached the end, finally, of the “Cosmic Spider-Man” saga.

There’s a downside, I’ve found, with these multi-part “series” of blogs, where I intend on tackling larger stories and analyzing them bit by bit. A problem I faced with both my “Alien Costume Saga” and “Cosmic” analyses was that, oftentimes, individual chapters did not possess enough material to offer significant narrative scrutinization. I struggled with finding words to say, observations to make, and conclusions to derive from those observations. You can only say “This Acts of Vengeance stuff is kinda dull” so many times before you start to feel like a hamster in a wheel: taking steps but getting nowhere. It’s almost a certainty I will need to face whenever I reach my “Clone Saga” analysis, which feels like an upcoming, culminating chapter in the work I’ve been doing so far.

But, for now, we can fixate on a different issue. This one, to be exact. This final look into the cosmic side of Spidey, ending this saga on either a (big) bang...or a weak webline whimper. 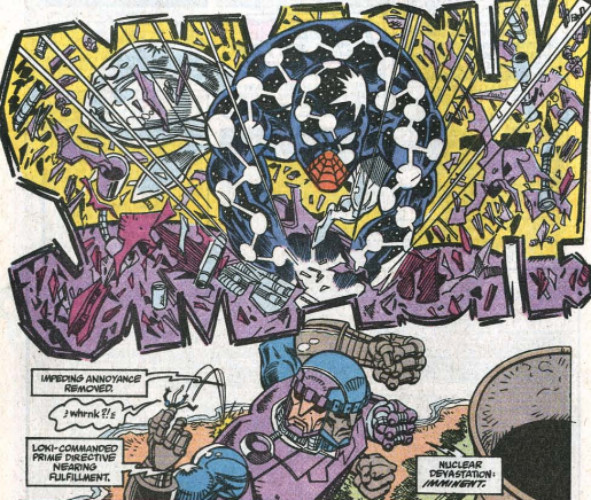 Don’t hate me, cause I’m not denying Larsen’s skill. He does his best to make this final chapter bombastic, as he did the Spidey/Magneto tussle a few issues ago. But between that issue and this one we got an artistically mesmerizing Hulk/Spidey showdown. Maybe McFarlane popped back over to ASM just to have a crack at the Hulk again, but I wished he stuck around just a little longer. The guy is really good.

But I gotta give Larsen the credit he deserves. For a story that, so far, has felt underwhelming and mediocre most of the time, it ends with a fantastic series of panels, delivered wonderfully from Larsen. Our tale sees one final ploy by Loki at the tail end of “Acts,” combining three mutant-hunting Sentinels into one monstrosity. Spidey, fully empowered by his cosmic energies, engages this Tri-Sentinel in battle. The fight is fantastic, culminating in an epic full-page shot where Spidey decimates the Sentinel in a single blow.

Michelinie ends the “Cosmic” narrative with an intriguing revelation, one which doesn’t save the arc completely but offers it slightly more depth. Fans will know that the energies which empowered Spidey were the Enigma Force, a sentient energy that bestows itself upon individuals, transforming them into Captain Universe, in times of great danger. The Enigma Force had been introduced prior to this arc and, in a handful of panels, had been teased as the energy which imbued Spidey from his initial interaction with the power surge. 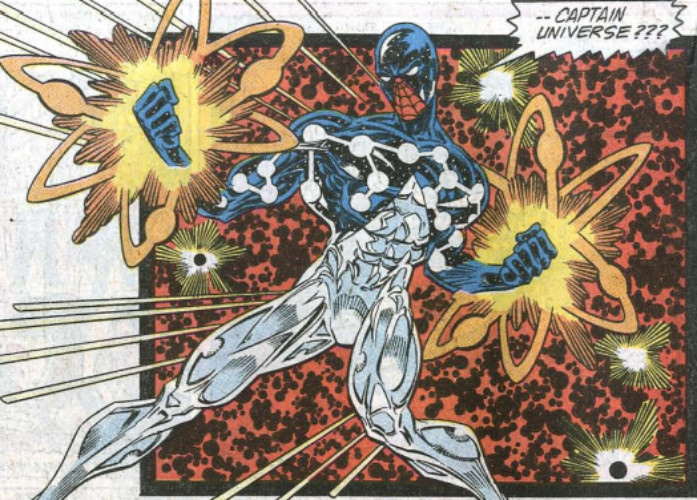 There’s a sense Michelinie and Conway considered this facet early on...maybe? Michelinie did very little to introduce this concept, giving Conway the lion’s share when it came to gradually divulging these behind-the-scenes machinations. Artistically, Alex Saviuk first introduced this idea by partially imprinting atop Spidey an after-effect image of an individual who looks like Captain Universe. Conway, in other issues, toyed with this image, making Spidey even somewhat aware of its existence. I understand why Conway handled the bulk of this revelation, since he was writing two of the three Spidey titles, and I get that Michelinie handled this final chapter because it took place in the book he was penning. The disconnect between the writers, unfortunately, led to a jumbled juxtaposition of arcs...with Conway hinting at greater depth to Peter’s powers and Michelinie contributing very little.

The “Captain Universe” revelation, then, leaves me divided. I wasn’t surprised with the event, having known of the story arc and having read this issue several years ago. But I was glad that it culminated this way, giving us a genuine reason for Spidey’s brand new power set, one which was at least connected to past Marvel history. If anything, Conway sets up the revelation really well; even if he decided late in the game, “Oh, let’s have this new power surge be related to the Enigma Force,” he teed up the idea up well enough that it feels resolved well in this issue. 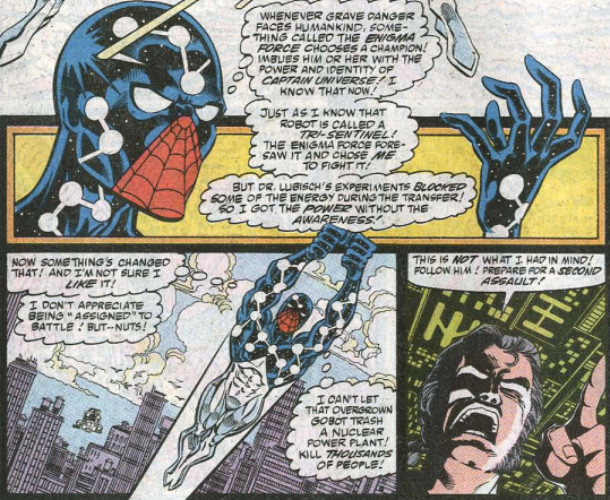 What bothers me is an idea Michelinie introduces regarding fate. He briefly has Spidey consider the possibility of the Enigma Force empowering him a while back specifically to stop this Tri-Sentinel from killing a whole bunch of people. Okay, makes sense. I can believe that this enigmatic cosmic power source has the sentience to pick Spidey to serve as its human host because it preternaturally perceived the threat of the three-headed hydra of a robot. And that’s not sarcasm. I genuinely have no problem with it.

What I have difficulty swallowing is the incredibly forced idea that this is what our writers had planned the whole time. Spidey makes some comment about not having the Force’s “cosmic awareness” and thus not knowing of the Tri-Sentinel threat beforehand, giving the arc "plot armor" against the suggestion that the assembled writers and artists really should have plugged this idea from the get-go. At the end of the arc, unfortunately, Michelinie doesn’t do enough to sell the concept, mainly because he hadn’t contributed enough beforehand to make this revelation wholly plausible. Awesome as this final fight between Spidey and the Sentinel ends up being, there’s very little build-up to the showdown. 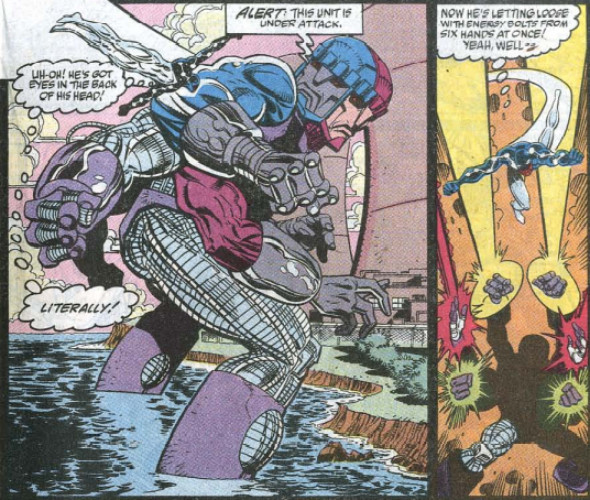 I think, these days, there’s a much greater emphasis on plotting out comic story arcs. Fans call it “writing for the trade,” where an author plans out a story that can be easily collected in a volume. I don’t know if that was the case circa 1990, and even if writers engaged in it (some certainly did: check out Watchmen or several of Chris Claremont’s Uncanny X-Men stories), not everyone played that way. That doesn’t feel like the case here, of course. This final chapter is stupendously illustrated and, when considered on its own, marks a successful end to the story. Spidey vs. the Tri-Sentinel. That’s it. We’re done. Wipe your hands clean, boys, and move on to the next arc.

Even as the final conflagration in a series of battles seemingly designed to one-up each other every issue, this one stands out. The sheer threat of the Tri-Sentinel surpasses the Hulk and Magneto. The fact that Sebastian Shaw is involved points nicely to a thread Michelinie introduced in the last issue with the Hellfire Club’s leader plotting his own agenda as he stood outside the inner circle involved in crafting the “Acts of Vengeance.” 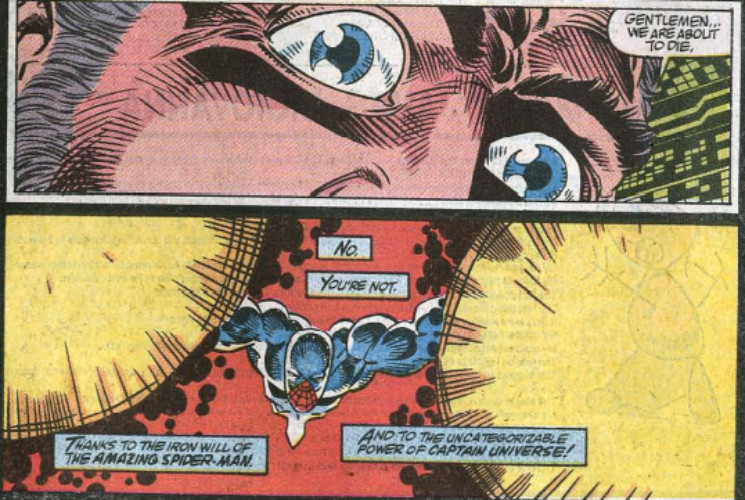 But you aren’t, sadly, going to ever convince me this is the last chapter of a plot slowly bubbling to a boil. I am not convinced this thing is brimming with layers or anything beyond a few artistic hints that the Captain Universe angle was always the plan.

Let’s look at this for what it is: a story about a stronger Spidey. As Mark Ginocchio points out in a post on this whole arc over at Chasing Amazing (a wonderful, Spidey-centric blog for anyone interested), this arc gave Spidey readers the chance to see their hero as a winner, as a guy finally in the same weight class as Thor. “Heck, yeah,” you’re supposed to go when he demolishes a Sentinel, sends Titania through a building, or punches the Hulk into space.

In that regard, yes, this story accomplishes that feat. We get a stronger Spidey. Even if you’re under no misconceptions that Spidey was going to stay this way, you can still applaud the concept temporarily. That’s all it was ever going to be. Temporary. And for a story to toy with the idea of how the poster child for power and responsibility was going to handle even greater is a fantastic idea. In certain cases, largely thanks to Conway, the idea works. In others, the philosophizing falls a little flat. 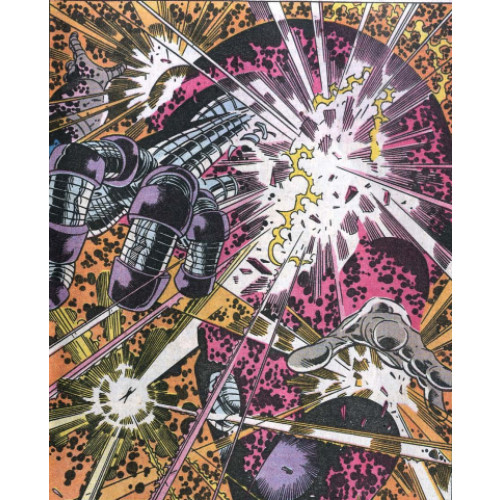 I’d love to believe that Spidey, from the beginning, was given these powers purposefully. It gives the story a grander feel, one with notions of fate and destiny. Purpose and meaning. But I cannot bring myself to believe, especially with the “Acts of Vengeance” always moving about, that Michelinie and Conway deemed this “fate” concept from the start. I’m not sold. I do wish it had been that way from the beginning, that this story was one where Spidey struggled and agonized over his new powers only to find there was a reason for them the entire time. Again, it’s a grand notion, tackling “Why am I here?” lines of narrative depth. And a little bit of that occurs, but it’s only completely glamorized in this final issue, and Spidey isn’t even given much time to celebrate or ponder. He simply returns to a world where New Yorkers will hate him just a little less because he’s regular Spidey now.

Screw those guys, then. I like my Spidey regular. I’ll take him over planet-pushing, Hulk-launching, ship-throwing, demigod Spidey any dang day of the week. And I’ll be here to write about regular Spidey, hoping he’s learned his lesson about not tampering with otherworldly energies. Because the Spidey people hate is the same Spidey I love, even if his writers sometimes upend him in strange ways. He can take it. He hangs upside down all the time.