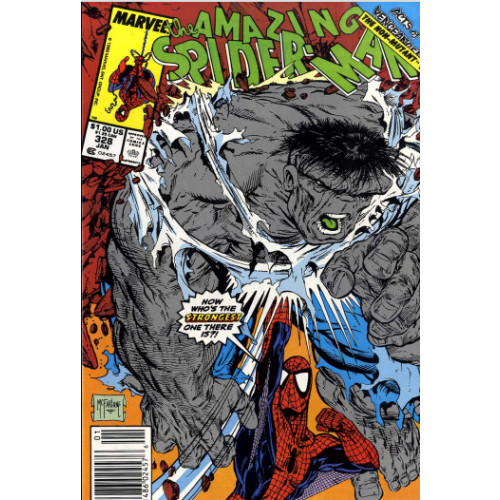 “It’s not easy being green,” Kermit the Frog once sang, lamenting how the tone of his skin (felt?) blended in with so many other things. The same could be sung about gray. And even though the Hulk’s been both during his decades-long tenure as a rampaging force of destruction, he stands out a little more than a singing frog who plays banjo in the swamp.

Hulk’s been through several changes through the years, skin color and otherwise, but Peter David is held to be the man who made sense of those changes. Maybe older comics can chalk up the gray-to-green switch to coloring issues in the printing process, but David cemented the change as a result of Banner’s psyche (and he's not a bad Spidey writer, to boot). The gray Hulk was more intelligent, capable of crafting sentences longer than “Hulk smash!” For a time, he worked as a leg-breaker, going by the suave persona of Joe Fixit.

Still gray in the very early 90s, the Hulk encountered our empowered Spider-Man. You can tell the assembled creators were itching for a chance to bring the former Jade Giant face-to-face with a cosmically-charged Spidey. For a guy who claims to always be “the strongest one there is,” he’s about to run right into a genuine contender for that particular title. 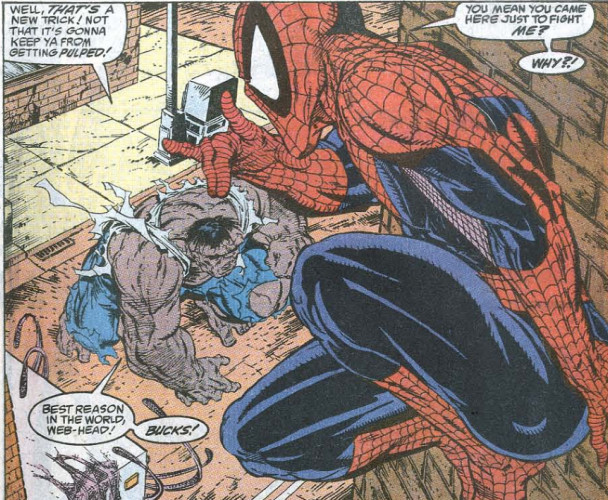 The talented Todd McFarlane, who’d made a name for himself illustrating the Hulk’s adventures under Peter David and, similarly, penciled a bunch of ASM issues alongside Michelinie, makes his triumphant if temporary return to the title. His reappearance is a blend of the best of both worlds--two characters he helped define, artistically, during the late 80s collide in this issue. A match made in Marvel heaven, if there ever was one.

His illustrations are, for me, the single greatest aspect of this entire issue. McFarlane’s work has always been incredibly detailed, and he’s no slouch here. He redefined the look of Spidey’s webbing, creating interlaced patterns of strands forming strong cords. It’s an insane crisscrossed-yet-never-entangled pattern, woven intricately and giving Spidey’s webbing definition and structure. Early in the issue, he’s allowed to play with the format of Spidey’s webs, using them to cast a small net to cover a bomb and later letting the webbing save a thrown truck. There’s some deep joy in how McFarlane crafts the strands, and I wonder how much fun he had at the idea of Spidey’s web being more malleable due to the cosmic energies residing inside him.

His Hulk is no less impressive. A towering juggernaut (no, not that Juggernaut) of gray muscle, the Hulk achieves a Frankenstein-esque look crossed with something more animal. Some expressions appear similar to the original Jack Kirby drawings, yet covered with additional details. He often poses like a massive ape, giving an animalistic style to his leaps and movements. McFarlane seems to understand the bizarre dichotomy of the gray Hulk: a human mind, or at least an intelligent consciousness, existing within a brutish form.

Michelinie makes do with the premise as best he can, but as we’ve seen with other stories, he’s a slave to the “Acts of Vengeance” premise allotted him. This time, Sebastian Shaw, approached by the movers and shakers behind these “Acts,” seeks the Hulk to eliminate Spider-Man, who’s been a constant thorn in the side of our big-name planners (as we’ve seen). Michelinie, it seems, is at least attempting to throw some variety into the story: instead of having Doctor Doom or Magneto go after Spider-Man or hire a lackey, as we’ve witnessed nearly half a dozen times already, they send someone a little further down the food chain. Perhaps this is intended to showcase the scope of our supervillains’ influence over their community. It does, nicely, add a little depth to Shaw’s intentions and makes him a bit of a player in these ongoing games. 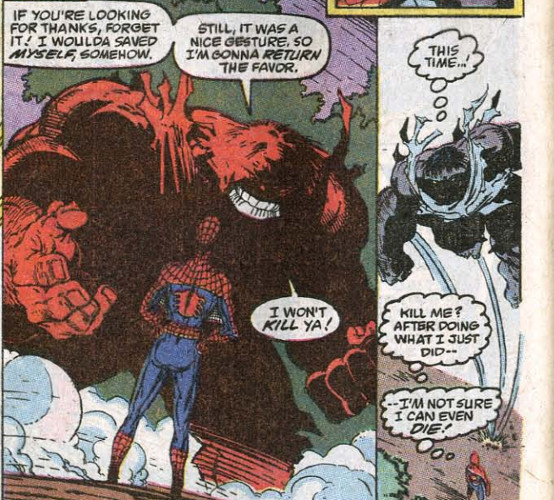 Michelinie, interestingly, highlights a point I realize has been lacking in these recent issues: tension. The round-robin style of storytelling has been far more disjointed than necessary, with writers seeking to insert the same overarching plot into three different series without much connective tissue between them. What Michelinie does is slip in a little background tension--it’s not enough that our writers send supervillain after supervillain against Spidey just because they need to obey the rules of a crossover. Michelinie, finally, offers a bit more narrative reasoning for Shaw’s machinations, hinting at discord “behind the scenes” as it were. Shaw, though working with the inner circle, harbors his own goals and dreams, creating an intriguing subplot that, if I recall, moves past this issue just a little.

In the foreground, Michelinie’s storytelling method breaks down a little. “Hulk vs. Cosmic Spidey” seems to have been the order of the day, and without anyone telling Michelinie whether they wanted pickles or no pickles on their superhuman sub-sandwich, he serves the concept as is. A possible lack of forethought surrounding the general premise is witnessed almost immediately: Shaw, in appealing to the Hulk, promises the Gray Gargantuan money. Yeah, money. He offers the Hulk, who doesn’t even wear a shirt most of the time and spends his days avoiding the military by hopping around the country, money. The reasoning is slapdash, lazy. And the Hulk just shrugs and asks which direction he wants Shaw to point him in. I get that this Hulk is smarter; you could just tell green, dumb Hulk that Spidey insulted his grandmother and the big guy’d go hopping off to paste our Web-Headed amigo. Those tactics don’t work here. But money? What’s the Hulk gonna do with money? Maybe it’s to support a lifestyle he enjoyed as a leg-breaker? He wore some nice suits then. Far-fetched as the concept is, Michelinie could at least offer an explanation as to why Shaw offers finances. 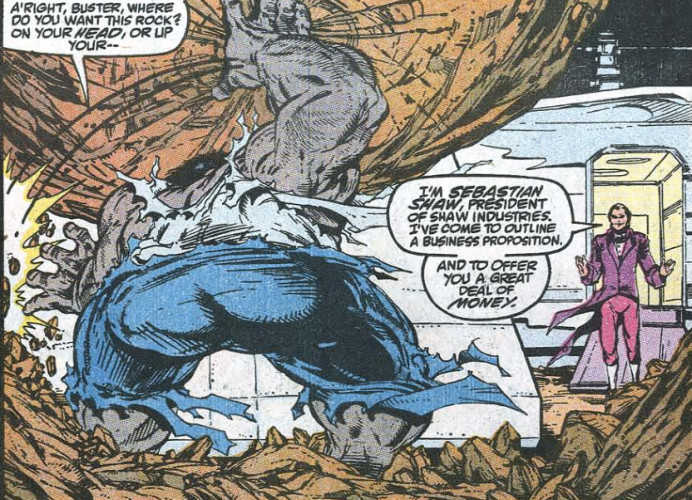 The rest of the issue feels a tad generic. The Hulk heads into a heavily populated area of New York and starts throwing cars around. He and Spidey trade blows across two different fights, one intentionally staged in a low-density area (because the Hulk’s suddenly worried about casualties?). The fights, if nothing else, continue to prove the extent of Spidey’s newfound abilities. He shoots lasers from his eyes, adding to the already bizarre litany of powers he’s developed (and to further stress the already dubious Superman comparison). He ends the fight by punching the Hulk into space. Again, it’s a dang good visual provided by McFarlane, showcasing how any other artist would have failed at tackling the scope of this fight.

But it’s just a fight. A few recent battles have, for me, at least been somewhat meaningful. Spidey’s scraps with Trapster and Titania showcased his building power set; his conflict with Magneto injected a bit of responsibility into how Spidey wanted to function with his new powers. Sure, this Hulk fight proves Spidey’s truly “the strongest one there is,” if only momentarily. If that’s the goal, to prove beyond a shadow of a doubt just how obnoxiously powerful Spidey is with these abilities, Michelinie and McFarlane perform admirably. And who doesn’t love a good slugfest? Beyond this, the battle lacks any other genuine narrative quality.

There’s this idea--and I’ve touched on it before--floating through these narratives, hinted at more than anything else, that the assembled writers and artists are just throwing stuff at the web-covered wall and seeing what clings. Of course, nobody’s gonna out-and-out admit that this story is slowly veering off the rails. Even I’ll admit I wasn’t expecting brilliance when it came to this arc. But I like growth in a character, I like change. We’ve seen Gerry Conway toy with some notions of responsibility, and even Michelinie has commented on it briefly. But this issue really just wants to see a big ol’ superhero smackdown, and as much as I enjoy that as the next guy, the “let them fight” mentality renders this issue a little simplistic.

The background details end up being a bit more interesting this time around, as Michelinie weaves in a subplot I believe goes a little further than this issue. Perhaps reading the other “Acts of Vengeance” arcs in other Marvel series would provide greater context, but there does seem to exist these tensions within the supervillain community. Unique as it is to have guys like Doctor Doom, Kingpin, the Wizard, Magneto, and the Red Skull lay aside their differences to tackle the perceived “superhero problem” as a whole, their underlying selfishness and bitterness get the best of them. This is merely hinted at, particularly in how it pertains to Shaw. He’s more minnow than shark in the whole piece, so to see a guy who isn’t in the inner circle take steps to assert his dominance (and why not? He heads up the powerful Hellfire Club, after all) is an intriguing idea. He wants to take a bigger bite out of everything, prove he’s got a little piranha in him. 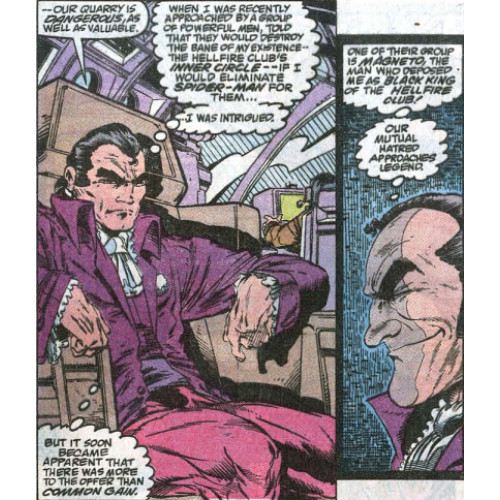 Part of me wishes Michelinie had been able to focus on this over some of the slugfest we’re given. But, naturally, I get that this is, foremost, a Spider-Man comic. It’s got the guy’s name in the title and everything, you know. This isn’t “The Amazing Sebastian Shaw.” Yet another victim of the crossover mindset, unfortunately. Again, maybe Shaw’s machinations would make more sense if I read the entire crossover; if that’s the case, it’s kind of difficult faulting Michelinie for his brief fly-by here. If nothing else, this issue gives us a bombastic battle between two champions...even if it sacrifices some of its intriguing underlying narrative to do so.