Spider-view: “The Deadly Foes of Spider-Man”

Though not a perfect series, Deadly Foes is a fun glimpse into how the villains of the Spider-Man universe operate 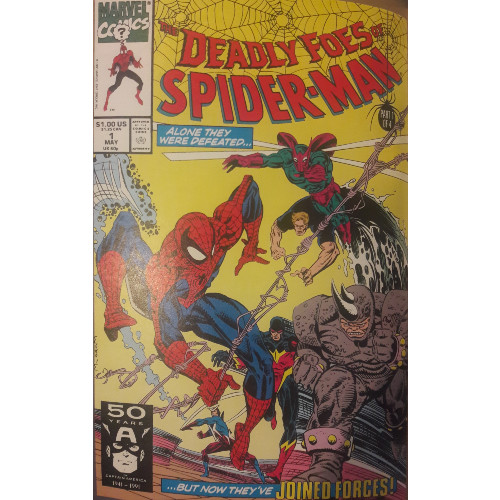 I recently touched on a pair of stories involving the first and second incarnations of the first supervillain team Spider-Man ever battled–the Sinister Six. Introduced by Stan Lee and Steve Ditko in Amazing Spider-Man Annual #1, this avaricious alliance went dormant for nearly three decades before David Michelinie and Erik Larsen gloriously brought them back in 1990 for a six-part Amazing Spider-Man epic. Between those two tales, a new “sinister” squadron took a crack at Spidey–the Sinister Syndicate. Composed of Beetle, Rhino, Hydro-Man, Boomerang, and Speed Demon, the group failed to defeat Spidey and Silver Sable (with a little help from then-reformed super-criminal Sandman). I don’t recall much of that original tale, but it hasn’t stuck with me the same as Lee and Ditko’s original incarnation of a “sinister” super-team…perhaps a re-read is overdue?

In 1991, nearly a year after Michelinie and Larsen resurrected the Six, the Syndicate got another shot at stardom in their own four-issue limited series. Leaving their previous defeat behind them, the Syndicate banded together again, determined to make sure the comics-reading world remembered them as the greatest team with “Sinister” in the name.

“The Deadly Foes of Spider-Man" 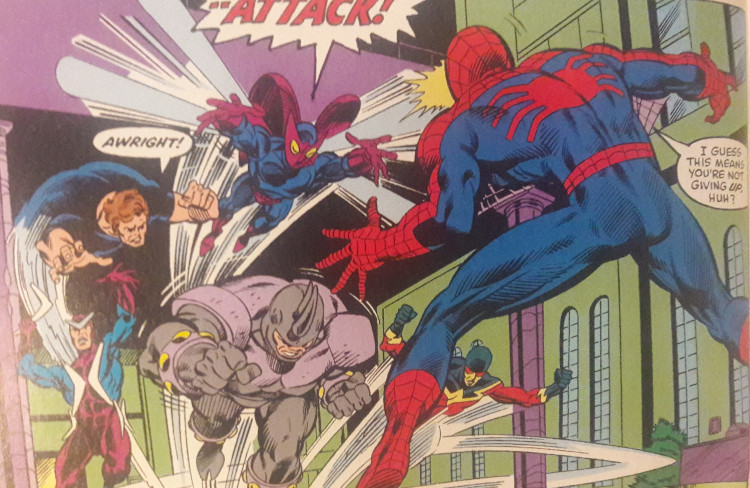 I felt unquestionable Sinister Foes of Spider-Man vibes from this series. That book, written by Nick Spencer from 2013-2014, assembled a ragtag group of villains who never gave a second thought about betraying, backstabbing, or double-dealing their comrades-in-arms. In fact, several characters from this series cross over into that one–Boomerang, Shocker, Speed Demon, Hydro-Man, and the Beetle (albeit a female version…though Abner Jenkins, the original Beetle and a star of Deadly Foes, does appear as Mach-7, but I digress), and though the erstwhile group of evildoers call themselves “the Sinister Six” in Superior Foes, they’re really the Sinister Syndicate reborn.

I don’t know if Spencer read Deadly Foes, though the implication is certainly there (and I wonder if titling his book “Superior Foes” is a shot at this original series), but themes certainly extend from this book to that series. The two-faced, downright deceitful nature of several of Spencer’s characters are also channeled through this title. Though not as complex a story, Deadly Foes features an oftentimes rewarding glimpse into the minds of several of Spidey’s not-as-infamous rogues. 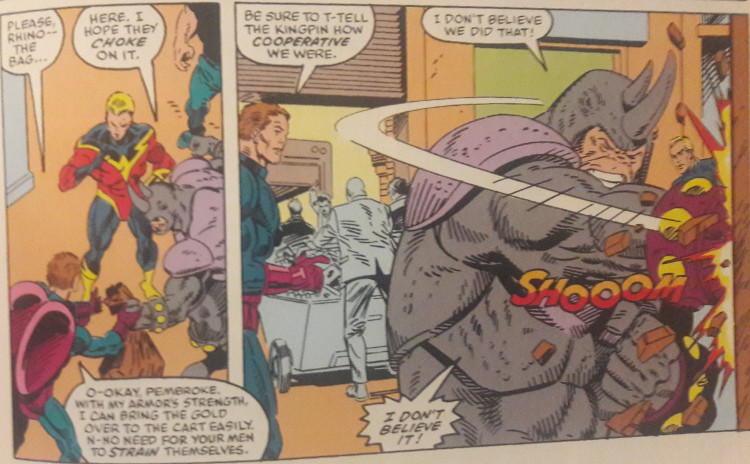 Fingeroth seems to take pleasure in dialing in on how these various villains work, either separately or together. The Syndicate–made up of Beetle, Boomerang, the Rhino, Speed Demon, Hydro-Man, and getaway driver Leila Davis–is a mish-mash of various personalities and intentions. Hydro-Man’s in it for the dough; Rhino’s hoping to scrounge up enough cash for an operation that can remove his armored hide; Speed Demon takes a liking to Leila, though she’s Boomerang’s girl; even Leila has her own motivations flitting about in the background. Across four issues, Fingeroth weaves his deceptive tale well, with characters double-crossing one another, severing alliances, and building new (if not temporary) associations.

It’s these dichotomous personalities which allow Fingeroth’s characters to become as standout as they are. Perhaps some of the motivations are simple–Hydro-Man just wants his money, man–but they’re carried throughout each issue. Boomerang, never one of Spidey’s brightest foes, is nevertheless a selfish, scheming sonuvagun and maintains that reputation throughout the series; likewise, Beetle’s aspirations of leadership, Speed Demon’s interest in Leila, and Rhino’s wish to remove his hide all give the series a regular cadence to follow, with plot points flowing rather naturally from these motivations. It keeps the reader wondering–will Speed Demon’s interest in Leila create conflict between him and Boomerang? How will Beetle’s goals conflict with Rhino’s? 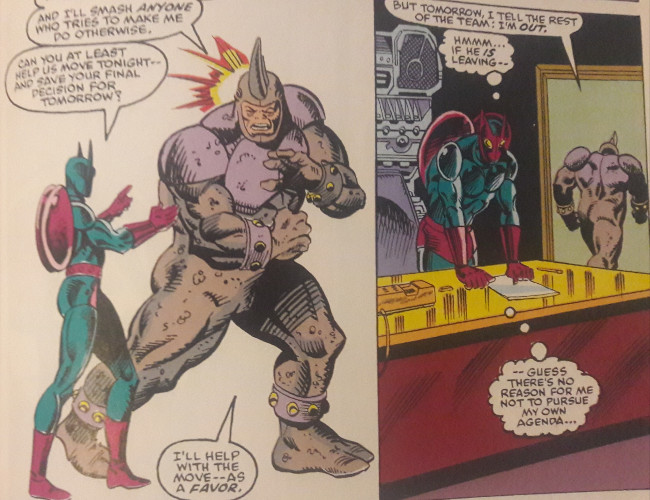 This is what makes the story as fun as it is. Oftentimes, Spidey swoops in and thumps the Rhino during a bank robbery or messes up the Lizard’s plans to turn all New York into lizard-people. Maybe we get a couple glimpses of the Lizard setting up his plan or Doc Ock assembling some fancy doomsday device. Rarely, however, do we get entire stories predicated on those schemes, those motivations. Fingeroth allows each villain to shine, letting us spend quality time with each of his characters and understand their motivations. Rhino’s goal–and I highlight him because he’s a personal favorite part of the series–stems from prior stories where the character had attempted to remove his outfit. Heck, though never referenced directly, the whole series is predicated on the Syndicate’s original appearance.

To his credit, Fingeroth also manages to juggle a couple of engaging twists as the story pans out. Some occur late in the series, yet Fingeroth largely plants seeds early on so that the twists don’t hamper the story or feel conceived at the last minute. The identity of one character, specifically, offers a new angle to the narrative, ramping up the revenge elements Fingeroth introduces as characters turn on each other. One late, late twist doesn’t fare quite as well–Fingeroth has to summarize a decent amount of plot in order to showcase how the twist is set up. He does manage to weave these elements fairly well into the entire story, allowing the twist to come across as natural as possible, but that seems more like luck than anything else. Though intriguing and aligned with the nature of the series, this second twist still occurs more suddenly than the first and isn’t quite as appreciated. 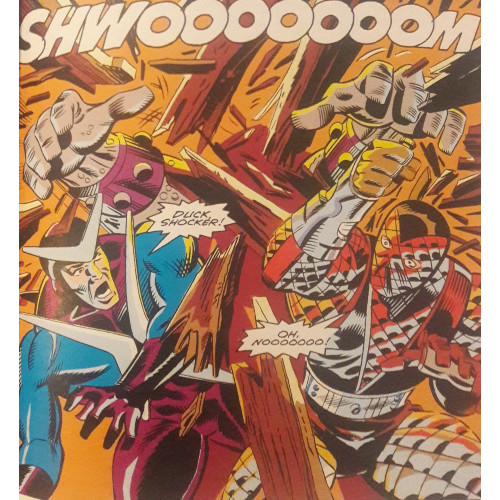 Fingeroth stumbles in a few other places as well. His use of Spider-Man is, surprisingly, coincidental and forced. Though he bears the series’ title’s final words, Spidey appears sporadically, often more as Peter Parker than Spider-Man, in ways which seem highly coincidental. Twice, as Peter, our hero just so happens to recognize a couple of his famous foes–the first after almost getting hit by a truck and recognizing Boomerang and Speed Demon as passengers, and the second after losing a taxi to a guy he knows is the Shocker (who technically isn’t part of the team but stars in his own unique subplot as the series progresses). Both moments hinge on Peter being in the exact right place at the best time possible, and though both moments lead to some entertaining “Spidey vs. his Deadly Foes” shenanigans, the set-up is a little silly and regrettably random.

Despite him being my favorite character in the series, the Rhino is also done dirty…though this may not be Fingeroth’s fault. The series, as mentioned in the first issue, takes place prior to Amazing Spider-Man #344, where Spidey and Cardiac engaged the Rhino in armed (and armored) combat. Since Deadly Foes was physically produced after that issue, however, Fingeroth’s plot for the Rhino goes awry by series’ end. Successfully removing his outfit, as he always planned, Rhino is offered a new chance to take up his mantle again and resume a life of armored villainy. This “epilogue” feels ridiculously tacked on to Fingeroth’s plot, determined only because Michelinie had used the character previously. Fingeroth has to retcon his own series to make it aligned with ASM continuity, which is a tad disappointing. I’m not necessarily bummed, nor am I surprised, that the Rhino’s “retirement” is temporary…I’m just a little disappointed that Fingeroth either chose to or was told to include Rhino’s return to crime mere pages after he removes his suit. The scene upends much of the great work Fingeroth does on the character over the preceding issues. 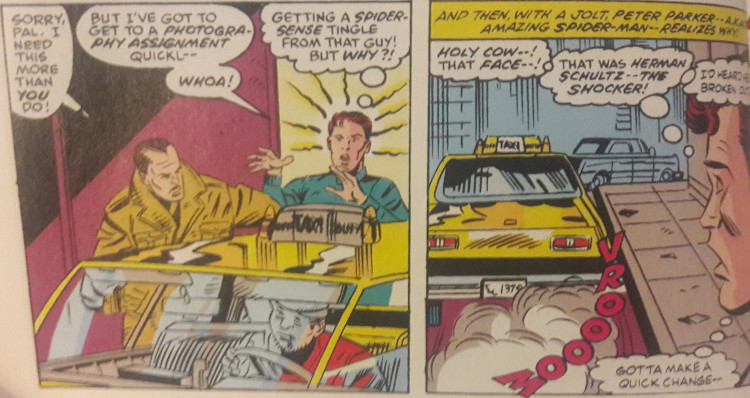 The incident, though disappointing, is a unique glimpse into the kind of chronological reading I’m doing and the impact of reading a comic book collection this way. Were I parsing through each story based on an in-universe timeline, I would have read Deadly Foes prior to ASM #344 and may not have had qualms with the Rhino piece. But reading these as I am, through production chronology, I see the disparities between the stories and see the possible reasoning behind Fingeroth’s decision to have Rhino return to crime. It’s an interesting observation to make, seeing how a pre-ASM #344 story was effectively altered because of in-universe events which wouldn’t happen until ASM #344 but were produced in our world prior to Deadly Foes.

Deadly Foes is not quite the same animal as Spencer’s Superior Foes (which I’m gonna be reviewing many, many, many blogs from now): it’s a little simpler, much shorter, and more tethered to then-continuity. But Spencer’s later series certainly feels beholden to Deadly Foes, for at least birthing this concept of having an entire limited series centered on the bad guys. Perhaps the Sinister Syndicate won’t ever be the most infamous name in Spidey supervillain team history, and perhaps the “Deadly” feels like a bit of a misnomer when your central “protagonists” include a guy who throws boomerangs and a dude who’s really fast (Venom, these guys are not), but this series is nevertheless entertaining for anyone wanting to see how the other side exists. Imperfect, yes, certainly a little flawed…but isn’t that just like the villains who run amok across the pages?