Spider-view: “The Return of the Sinister Six”

This six-part saga gloriously resurrects the Sinister Six, relying on nostalgia a bit too much even as it crafts a compelling arc 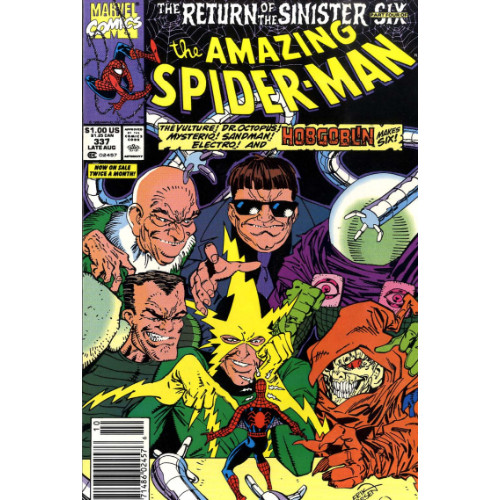 Amazing Spider-Man Annual #1 remains, to this day, my single favorite issue of any Spider-Man comic book series ever. It’s the issue that got me into reading comics and features a classic team of six supervillains (Doctor Octopus, Electro, the Vulture, Mysterio, Kraven the Hunter, and Sandman) who each had failed to take the Web-Head on separately. In a classic Stan Lee/Steve Ditko story, Spidey (who started facing an internal crisis where his powers blinked out temporarily) took on each villain independently, saving Aunt May and Betty Brant from the mechanical clutches of Otto Octavius’ evil alter ego.

I don’t know how well the issue was received immediately after its release or in subsequent years, but I am amazed it took 26 years for the team to be reformed. In an industry where the Frightful Four, Masters of Evil, and Brotherhood Evil Mutants kept popping up, with ever-changing rosters, how the heck did it take close to 30 years for the Six to re-form? We’re talking about staple bad guys from one of the most beloved rogues galleries in all of comicdom! This should’ve been a no-brainer to anybody, but no, 26 years!

David Michelinie finally pulled the group together in the early 90s for a six-part saga which saw the nefarious team finally reborn from the ashes of negligence. How well does Michelinie take the then-underused cadre of criminality and pull them into the then-current era of Spidey history?

“The Return of the Sinister Six” 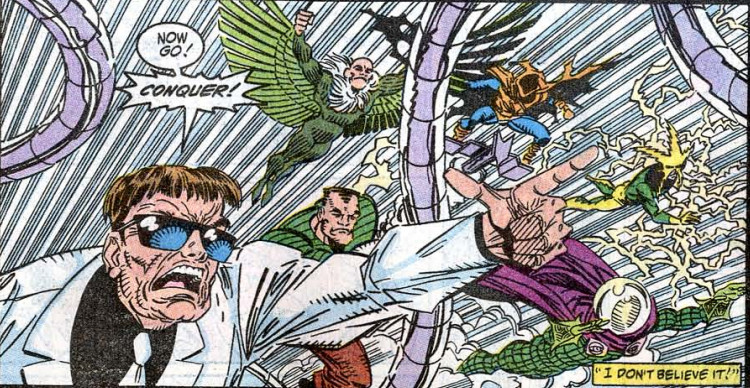 Looking back over previous "Spider-view" posts, I realize I have not tackled many stories featuring “classic” Spider-Man villains. Various stories of late have showcased newer Spidey villains–such as Venom, the Sin-Eater, the Answer, and the Hobgoblin–or, as in the case of the “Cosmic Spider-Man Saga,” have featured villains usually not related to the Web-Head’s rogues gallery. Maybe the Kingpin’s showed up here and there, maybe Spidey had a showdown with the Scorpion a while back, maybe Doctor Octopus popped up in a graphic novel I covered…but a lot of those villains initially introduced in the old Lee/Ditko stories have not made their presence known much.

It’s somewhat understandable. In certain cases, various villains were unable to be used. The original Green Goblin was dead, and his son was (at that time) not wearing the costume. Kraven the Hunter had committed suicide at the end of “Kraven’s Last Hunt.” The Sandman had reformed. And, for a more personal reason, I just don’t have issues outside of the Amazing Spider-Man arcs I’ve been reviewing where these guys appeared.

So it's a joy to finally get to see the Six make a comeback. 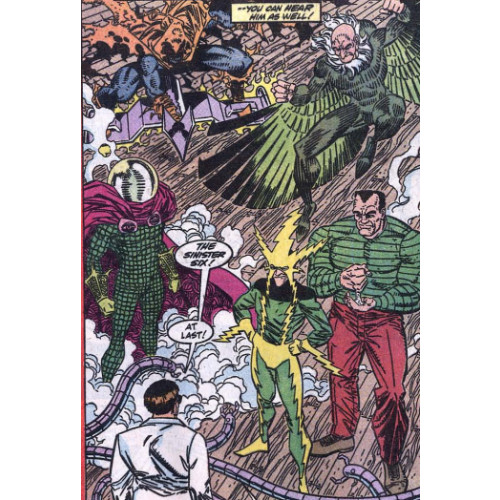 Michelinie heavily channels the spirit of Lee throughout this story, creating a tale that isn’t necessarily a copy of the original annual beat-for-beat but bears enough resemblance to the classic narrative to (mostly) appropriately acknowledge its indebtedness to Lee’s 1964 story. Like the first, Doctor Octopus gathers a team of six supervillains together for a new, nefarious plot which he intends to use to bring the world to its knees. Michelinie, nicely, is given more page space to let the story breathe, six issues instead of the one Lee had.

Michelinie takes his time to re-form the Sinister Six, devoting whole scenes where Doc Ock approaches and addresses his co-conspirators one-by-one. Michelinie’s Octavius is far more devious and untrustworthy than Lee’s; where Lee simply had Ock lure his compatriots by promising Spider-Man’s death, Michelinie allows Ock to be craftier and more selfish in his acquisitions. Lee’s Doc Ock at least utilized the concept of a shared enemy to bring his allies together; Michelinie’s Doc Ock is simply a master manipulator, pulling strings to make sure he stays on top of the game, no matter how his newly acquired allies are hurt. Here, Octavius threatens to hurt the family which supports the newly reformed Sandman, secretly calls the cops on Mysterio, and threatens the Hobgoblin with physical violence. It’s a somewhat darker take on the nefarious villain–who, it should also be stated, has mostly shed his typical girth and has taken to wearing a suit instead of his iconic green-and-yellow outfit. I like the update in personality and appearance, and while this story arc gives no narrative reason for either, I think it works well. 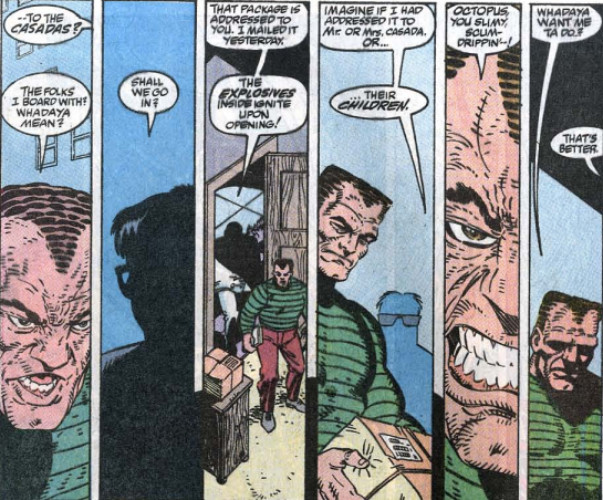 The lineup change is also interesting to point out. As I noted earlier, Kraven the Hunter–the original sixth member–had been deceased since J.M. DeMatteis’ and Mike Zeck’s classic “Last Hunt.” Michelinie decides Hobgoblin is the best option for rounding out the new team, and I think his choice is the correct one. If Michelinie’s intention was to fill the slot with a “newer” villain, the only other baddie who comes to mind is Venom, and (slight spoiler alert) at the end of the last ASM arc we covered, Styx of “Styx and Stone” had seemingly killed the symbiote. Hobgoblin–who, at this time, is Jason Macendale, bonded to a demon fused to him by N’astirh during the X-Men “Inferno” crossover–feels like an appropriate choice to fill in the spot. He’s menaced Spidey enough to warrant the distinction of becoming a member of the team, and at the time this story was written, the whole cockamamie “Who is the Hobgoblin?” mystery had been seemingly solved.

Props should also be given for Michelinie’s plot: he allows the stakes to be bigger and badder than Lee’s ever were, with the fate of the world supposedly on the line. The Sinister Six’s threat now feels global, not just angstily turned towards Spidey. Spidey’s put in a position where he’s got to end the Six's scheme, not just for his safety, but for the safety of the people he loves and wishes to see protected. The plot’s specifics take a slight hit when fully revealed–Michelinie, like in another recent arc we followed, turns to cocaine addiction as part of Ock’s greater scheme (I mean, the writer didn’t become addicted, he just used cocaine addiction…oh, you know what I mean). Similar to that previous arc, Michelinie just seems interested in tagging a hot topic button of the day, and Ock’s revelation that he’s had a greater scheme the whole time would have worked no matter the endgame. 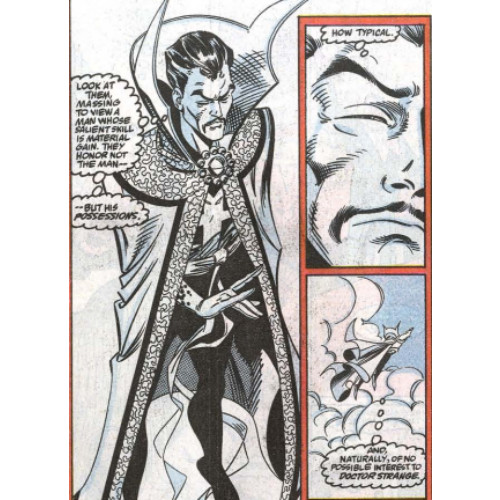 The one area where the main plot becomes somewhat stilted involves random cameos from assorted heroes–primarily Nova, Iron Man, Captain America, Thor, and Doctor Strange. In my mind, Michelinie provides these cameos as another nod towards the Lee/Ditko classic–characters like the FF and Doctor Strange popped up, primarily to provide a sense of the integrated world Spidey inhabited. Where those cameos were harmless and goofy, Michelinie’s seem like an intentional homage, but he feeds them into the plot so awkwardly, they come across as more of a rip-off than a reverential acknowledgement. Admittedly, in certain instances, these cameos add a little to the plot–Thor appears at the end to aid in completely ending a biological threat Doc Ock creates, and a random appearance by Captain America helps double down on an internal struggle Peter works through over the story–but they’re otherwise hollow. Doctor Strange's cameo feels particularly egregious, offering nothing of substance (quite literally, as the Sorcerer Supreme appears in his astral form) to the story and merely visually aping Lee and Ditko’s use of the character in their 1964 narrative.

I will say, however, I highly approve of Erik Larsen’s artistic talent in crafting six fantastic, full-page splash panels, one for each villain. Ditko did the same thing during his original issue, making Larsen’s work a genuine nod to the source material. He doesn’t ape Ditko’s style or copy the original panels…he just crafts his own moments with each character, bringing to mind Ditko’s wonderful, memorable pages while adding his own, personal dramatic flairs. Of particular interest is Sandman’s panel, illustrated after the grain-brained goon turns on Ock after getting tired of the doc’s threats. It’s different from the other five, temporarily treating Flint Marko as an ally rather than a foe. 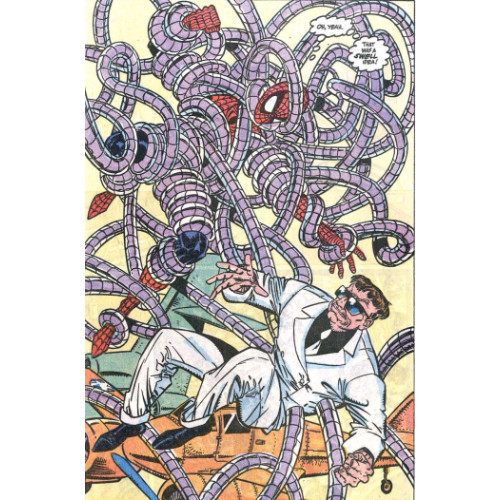 Where Michelinie truly soars in this arc is his creation of engaging subplots. Bolstered by the six-issue framework, he has ample time to finish a few threads he’d introduced earlier. Elsewhere, I briefly referenced an arc where MJ was kidnapped by Jonathan Caesar and also wrote about a few follow up issues where he sicc’d Styx and Stone after the Web-Head. In this arc, Caesar continues trying to manipulate MJ, something Michelinie had alluded to in a few “Cosmic Spider-Man” chapters. Michelinie reveals here, however, that not everything is as it appears, giving another dimension to his previous teases. This subplot feels a little ramshackle, thrown together to give MJ something to do. The plot is a testament to her character and allows her development beyond “worry about Peter all the time,” but the execution is a little awkward. Still, Michelinie works as gracefully as he can, and even if the particulars are bizarre, he still gives the subplot decent time to develop and wrap up by time the final issue finishes.

Even better is Michelinie’s use of Nathan Lubensky, May Parker’s fiancé. I mentioned him periodically during the “Alien Costume Saga,” specifically to his then-flaggering relationship with Peter. Nathan’s popped occasionally, but since the “Cosmic Spider-Man” arc, he’s been slowly fading physically. Cancer. None of the issues I’ve reviewed have dug into his condition deeply, save for a few comments from May about how much she’ll miss him. Regardless of previous “screen time,” Michelinie makes it clear here: May’s losing him by inches. 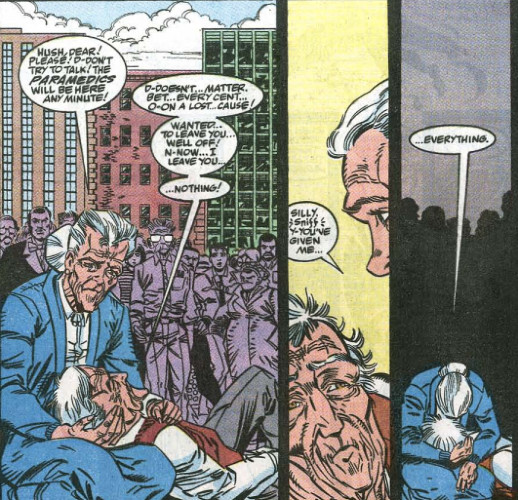 Nathan is lost completely to May here as a result of Adrian Toomes (who Nathan actually briefly befriended in an ASM issue a long time ago), dying after the Vulture nearly flies away with him. Though Spidey saves the man, Nate’s too weak to hold on much afterward. The moment is compounded by a few twists and turns–Nathan’s sudden loss rather than through his medical prognosis; Spidey’s ability to save him right before losing the poor guy; and Nathan’s crippling gambling addiction, which he was hoping to use to gain some profit to help May once he was gone. I haven’t spent as much time chronicling Nathan’s history as I may have liked, but the loss is a good touch to the story, adding personal stakes to Spidey’s dust-ups with the Six. And I never felt like Michelinie was stealing from another classic Lee/Ditko moment–that is, naturally, the loss of another Peter Parker father figure and beloved of May Parker.

Willie Lumpkin. Who else?

This six-part epic is a host of grand plotting on the part of its writing, grand scheming on the part of its villains, grand design on the part of its illustrations. The story isn’t perfect and, here and there, lies too heavily on the foundation that Stan Lee and Steve Ditko sculpted 26 years before. Still, given it was over a quarter of a century since their last (and first) appearance, the Sinister Six make a spectacular comeback, all things considered. The story’s appropriately big, allowing for decent development, action, and even some nice touches of emotion as Michelinie firmly brings a few stories, dramatically and tragically, to the last strands of their spider’s web.