Spider-view: “Sunday in the Park with Venom” (Venom, Part 2) 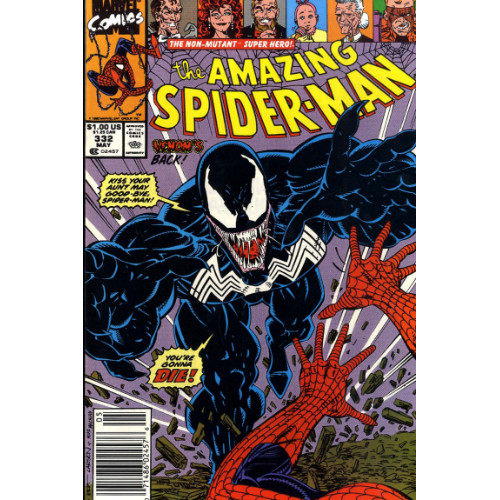 Several blogs ago, we examined the first appearance of Venom, former journalist Eddie Brock who melded with the alien symbiote of “Alien Costume Saga” fame. Driven by a dual hatred for Spider-Man–the symbiote for how Spidey “abandoned” it at the Saga’s end (a chapter I reviewed about a year ago to the day), Brock for how Spidey “discredited” his journalism during the Sin-Eater’s reign of terror–the pair briefly tormented Spidey, only for the hero to successfully battle them off. This two-parter marks Venom’s third attempt to, putting it mildly, encumber Web-Head’s life. I, unfortunately, did not cover the second instance, for which you’ll have to forgive me.

While Spidey gallivanted around with the Punisher, thwarting the United States government’s plan to institute cocaine as a form of U.S. currency (yeah, really!), Eddie Brock faked his own death in prison; subsequently, he and symbiote killed his captors and escaped. Yet again, Venom is on the loose and plans to stop at nothing until he tortures and kills the man who upended Brock and the symbiote’s lives.

“Sunday in the Park with Venom” 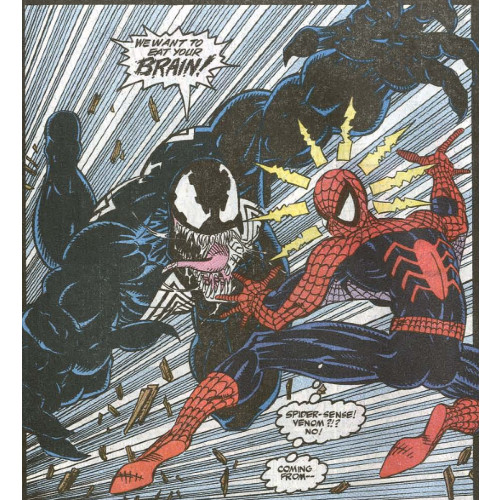 My earliest memories of Venom are associated with the 1990s animated Spider-Man cartoon. I’ve only seen a handful of episodes across different seasons, but the show’s take on the symbiote/Venom arc is well done, incorporating elements from this arc. I don’t know if Venom’s second appearance in ASM established any of the trails Michelinie cements here, but to me, this arc signifies Venom’s transformation from “cool, new supervillain” to “powerful archenemy.”

When Venom first appeared in ASM #300, he was simultaneously revealed to be the spurned symbiote outfit and Brock, a heretofore unknown character debuting (aside from a few shadowy appearances elsewhere) in that issue. I don’t know if Michelinie crafted a full-on plan to utilize Brock as a recurring character or intended for him to be the next “big Spidey foe” like the Green Goblin, Doctor Octopus, or the more recent, enigmatic Hobgoblin. Whatever the plan, this story cements Brock’s status as supervillain extraordinaire. 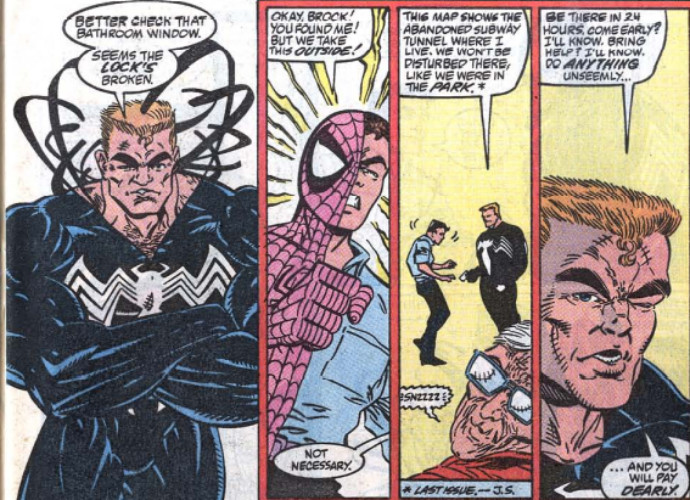 The animated series episodes based on this arc did a wonderful job teasing Brock’s enmity, combining it with the symbiote to create Venom, and having the supervillain ruthlessly stalk Spider-Man. The villain was tenacious, doggedly pursuing his foe and messing with him mentally, like showing up at Aunt May’s house unexpectedly. Michelinie crafts a similar villain here, making the Spidey/Venom conflict extremely personal in a way few other villains have achieved. Sure, Norman Osborn knew Spider-Man’s true identity once upon a time, but even he was a tad more brutal in invading Spidey’s life. Eddie’s more interested in toying with Peter, creating a deeper rivalry between the two men rather than just straight up discord.

Michelinie should also be commended for how he adds a layer of complexity to Eddie’s moral compass: a touch of heroism. Again, I don’t recall if this was an element he played up in Venom’s second bout of fisticuffs with the Web-Head, but Michelinie seeds a small yet significant scene here. During a fight between Venom and Spidey in Central Park, an infant is knocked off a bridge and begins to drown. Spider-Man, incapable of rescuing her at the moment, watches as Venom, of all people, saves the little girl’s life and delivers her back to her shocked/relieved parents. “We were innocent once,” he tells them. Later, he blanches when Peter threatens him about potentially hurting May. He’d never hurt the woman, he claims. She’s innocent. 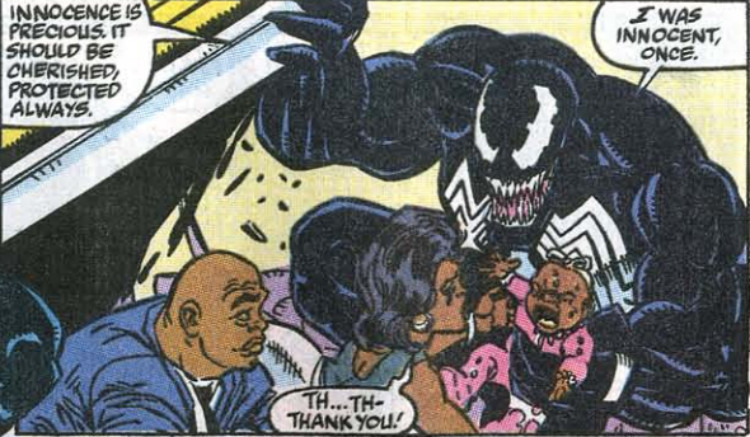 This idea of “innocence” really draws out a core characteristic for the villain and starts him down a path which will eventually lead to a more anti-hero approach. The whole “alien bonding with Eddie” concept is already fairly deep in its execution–ignoring, for a moment, Eddie’s sudden appearance as a never-before-seen reporter in ASM #300. Two individuals, each reflecting on their skewed perspective of events involving Spidey, join to wreak havoc on a man they deem guilty for trying to destroy them. But Michelinie taps into an extension of that idea: Eddie’s bias towards his own perceived “innocence” extends to others, albeit in a slightly more nuanced fashion. It’s a funny concept when you consider it for a moment: Eddie’s own warped sense of justice becomes slightly less skewed when applied to others. He rescues a baby who’s actually innocent. He refuses to harm May Parker. His perspective towards Spidey is still pretty messed up, particularly in how he views Spidey’s involvement in his life prior to bonding with the symbiote. But a bizarre glimmer of light pierces through the shadowy alien covering...perhaps showing Eddie’s humanity within the relationship?

Aside from the Venom factor, Michelinie delivers interesting conflict elsewhere. As I noted in a previous post, Michelinie (in a story I didn’t cover) allowed a mad mogul named Jonathan Caesar to kidnap Mary Jane. Obsessed with the model-turned-TV-star, he held her captive until Spidey rescued her. Caesar’s influence irritatingly worms its way through the background of these two issues as he sends a duo named Styx and Stone after our webbed wonder. Like Venom, Caesar wishes vengeance upon Spidey and will do what he must to gain an upper hand against the Wall-Crawler. 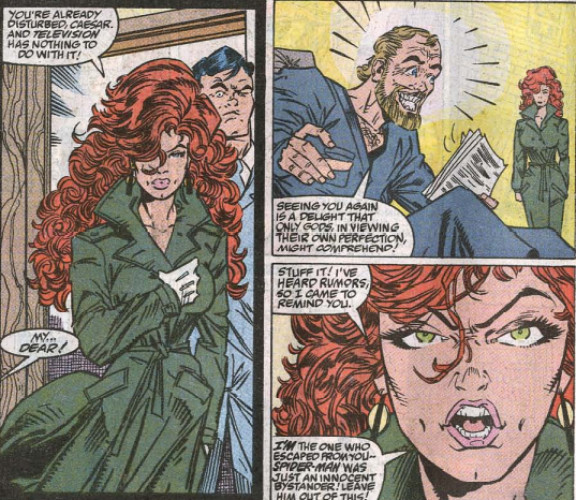 Styx and Stone themselves provide engaging conflict, and their shared backstory gives the story a hint of depth. Introduced in a few earlier issues, Styx and Stone represent themselves well here, with Stone offering tidbits of their past and trauma. The characters have been, in my mind, seriously under-utilized. Their backstories, powers/technology, and even name make them engaging villains who don’t come off as just one-note mercenaries. The bits of backstory in particular offer the characters more attention than I would usually allow them, delivering some slight sympathy towards Styx’s condition and Stone’s willingness to be his friend. It's a shame they haven't appeared more frequently.

Michelinie should also be given credit for fashioning a standout ending–a sudden yet welcome change is made which alters a character significantly. It’s a temporary dissolution of a particular relationship, one which will soon be reforged in upcoming stories. But the notion is engaging, even for a moment. Slightly regrettably, the concept behind it–this particular severing–is one which has been used already and, if memory serves, will be used again at least one more time. For now, however, I like how the issue ends on this drop, as it does allow Styx some minor influence over the story and marks a bold story beat, despite its temporary impact. 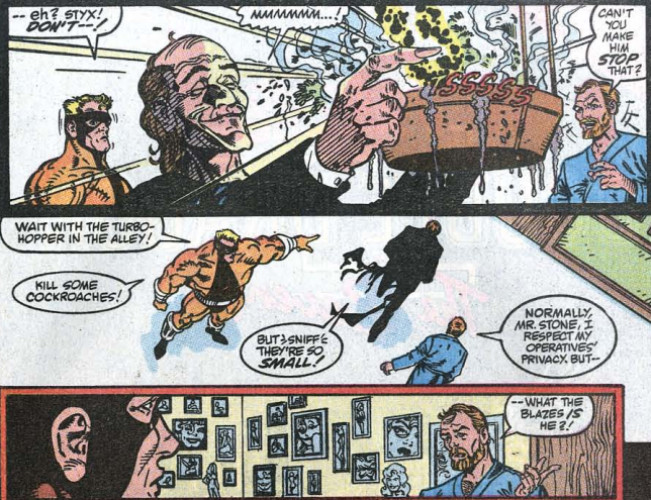 These issues, overall, are decently constructed. I like that we’ve moved into slightly more “Spidey-centric” territory, away from cosmic conundrums and vengeful actions. We get the return of Venom, some issues with Mary Jane, and some interaction between Spidey and members of his supporting cast. In some ways, the “Cosmic Spider-Man Saga” felt like the brakes were being pumped on what was typically going on in the regular Spidey titles, forfeiting the day-to-day dealings of one Peter Parker in favor of a multi-title tale. Now, we’re able to settle back into normal insanity–supervillains, supermodels, and superhuman feats of heroism.