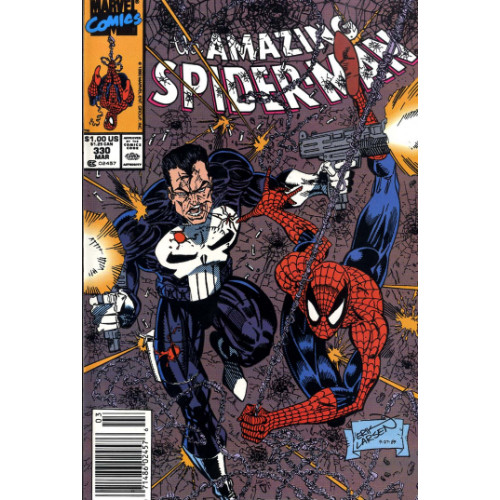 In the final pages of the previous ASM issue we examined (ASM #329, the last chapter of the “Cosmic Spider-Man Saga”), Peter briefly lamented the loss of his powers and the real-world impact he could’ve made with them. “With all that power, I could have stopped Khadafi!” he cries to Mary Jane as they try bringing a bit of green life to their new apartment. “Ended apartheid!” It’s an interesting point: yeah, with all the power granted him by the Enigma Force, maybe he could have made a difference in the world.

As nice a sentiment as it is, the point feels a little moot. Comics, rarely, find themselves capable of telling stories about heroes overcoming particular real world struggles. I think back to Jim Starlin’s wonderful graphic novel, The Death of Captain Marvel, and its heartbreaking depiction of Mar-Vell’s battle with cancer. In my mind, the story could never have ended with the captain’s cancer being cured...wouldn’t that set up a precedent in the Marvel Universe where nobody from then on would get cancer? And wouldn’t that remove the possibility of stories sympathizing with people who suffer from such a disease?

Even as a cosmically-enhanced superhuman, then, Peter would never have been able to drop kick Khadafi or put a stop to racism. It’s funny that, in the very issue after Peter loses the abilities which could have helped him end world hunger or terrorism, he finds himself on the trail of some dangerous people dealing with cocaine. 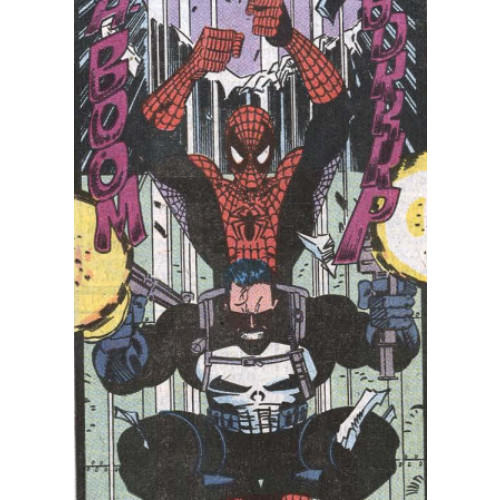 90s comics are known for being edgy. Really dark, hyper violent, over-the-top. Dudes run around with all kindsa guns strapped to their backs and pouches on their belts. The grim yet philosophical notions of 80s comics--found in stories such as Watchmen, The Dark Knight Returns, "Batman: Year One", "The Death of Jean DeWolff", "Kraven’s Last Hunt", and even Crisis on Infinite Earths--are made parody in these tales. It’s as if writers saw the bleakness of the 80s and said “We’re gonna top that” and just threw in more guns and bullets and blood without acknowledging the philosophical underpinnings which made those 80s narratives classics.

The appeal of those 80s comics is how wonderfully they dealt with real world conflicts and superhero tropes simultaneously. Watchmen peers into a world where superhuman characters like Doctor Manhattan would engage with and shape Cold War conflicts. "Year One" updated Batman for “modern” readers while deconstructing the notion of a billionaire donning a cape and cowl to fight crime. The analysis of culture feels intentional. 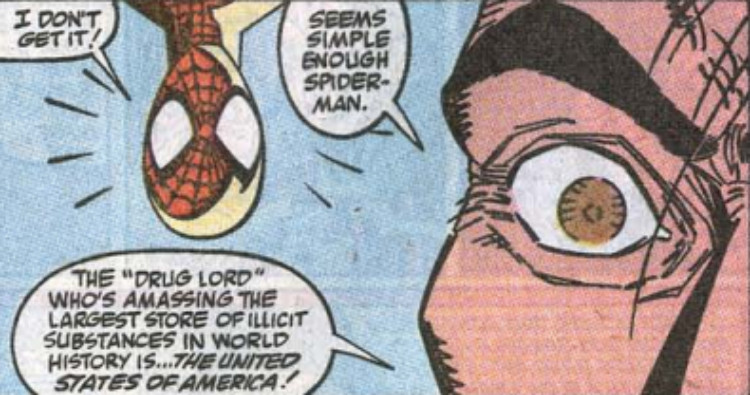 Not so this two-part ASM tale. Spidey teams up with the Punisher to fight the good fight against drugs but the whole thing feels unnecessarily forced. Much of this is driven by a plot twist revealed late in the game where our heroes learn, to their shock and horror, that the U.S. government intends on replacing the gold standard with the cocaine standard. I don’t understand the economics of it, but while I am clueless as to how viable a decision this would be were it applied in reality, I’m not a fan of the idea narratively. The tone feels like Michelinie is shooting for a big budget thriller, filled with bullets, conspiracy, and shocking twists. But implicating the entire U.S. government in a cocaine conspiracy (hmm, how’s that for a political thriller film title?) feels like a step too broad, especially for a two-issue tale.

Michelinie incapably maneuvers through the complexity of such a plot, focusing more on the Spidey/Punisher side of things rather than the wonky set up necessary for such a twist to begin remotely making sense or feel impactful. It’s a weird complaint for me to make, especially as I tend to lean favorably towards more character-driven arcs than plot-driven and, typically, would be disappointed at characters given less screen time thanks to exposition. Unfortunately, the characterization injected here feels a little same old-same old: while we have not had the (dubious) honor of examining many Spider-Man/Punisher team ups, the few we’ve looked at stress the whole “vigilante okay with killing vs. superhero who believes murder is wrong” angle. When the Punisher first appeared (courtesy of Gerry Conway), the idea was novel. An anti-hero with guns blazing popping into a book starring Marvel’s most outrageously funny comedian. Some literal gut-busting mixed in with the figurative. Even Punisher’s first showdown with Daredevil emphasized the same argument. I’m not saying it’s not a good argument to make...after a time, however, it gets a tad old. 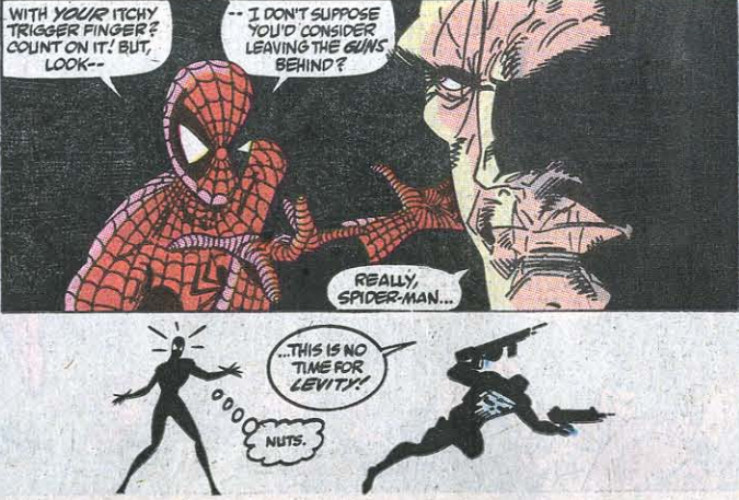 Michelinie just can’t seem to find a new way to express the dichotomy between our web-slinging friend and his gun-toting compatriot. He, briefly, allows Frank Castle to discuss his distaste for going after the U.S. government--he and Spidey are, naturally, going to interact with soldiers, men just doing their duty, led by corrupt leaders. It’s an interesting concept to bring up and could have been used to establish common ground between Spidey and Punishy. But Michelinie doesn’t delve deep enough into the idea to make his foundation firm.

What’s even stranger in this story is how bizarrely Michelinie crafts Spidey’s character in relation to the Punisher. At least one scene sees Spidey hoist an army colonel and threaten him harshly, with Castle of all people stepping in to keep Spidey from pulverizing the dude into a coma. The moment sticks out strangely, even if I understand Michelinie’s method: Spider-Man, though generally an easy going guy, is occasionally pushed into a darker mode of thinking. Peter David’s “Death of Jean DeWolff” gave us a fantastically dark Spider-Man, a hero who lapsed into a moment of additional violence before being brought back to his senses by Daredevil. Spidey can go to dark places or be so overwhelmed with the shadows of the world around him that he temporarily falls into that darkness himself. 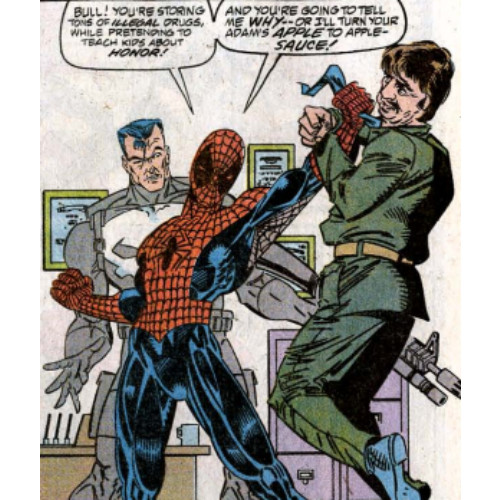 But having the Punisher be the voice of reason to calm Spidey down? It seems weird. I get that Spidey is prone to momentary lapses of judgment, but in a story which has tried juxtaposing Spidey’s lighter, heroic nature with Castle’s penchant for running-and-gunning, I feel like the scene should have gone the other way around. Who knows, maybe Michelinie was trying to avoid cliches? Maybe he thought having Punisher calm our web-clad buddy down was a more unique way of setting up the situation? Regardless, he can’t move past how awkward the whole scene transpires--perhaps if Spidey had been on edge the whole story, this brief explosion of attitude would make more sense. Spidey’s anger, though perhaps justified, feels misplaced in this moment, and I have a hard time buying him being calmed down by the guy who’s been mowing down thugs the last issue-and-a-half.

When he’s not giving Spider-Man a moral identity crisis challenged by a guy with a skull on his chest, Michelinie delivers some possibly interesting subplotting involving one Felicia Hardy. She worked her way through the “Alien Costume Saga” a few years before this arc, ending her dating relationship with Peter and popping up during one other brief arc we examined where she faked a different relationship with the poor guy. Now she’s back and looking for revenge. Michelinie toys with her character a little, having her start up a dating life with Flash Thompson just to get back at Peter. I don’t fully grasp the vengeance angle--granted, Peter dumped her during the “Alien Costume” fiasco, but hadn’t she toyed with his life enough by getting back at him? “Angry, bitter, stubborn ex-girlfriend” seems to fit Felicia’s character, and I appreciate Michelinie having her date Flash Thompson (who’d had a string of poor relationships pretty much since he’d seen Betty Brant behind her husband Ned’s back) as a nice bit of poetic irony. But Felicia’s vengeance-driven modus operandi, especially reacting angrily towards Mary Jane, feels more villainous than the Black Cat usually behaves. 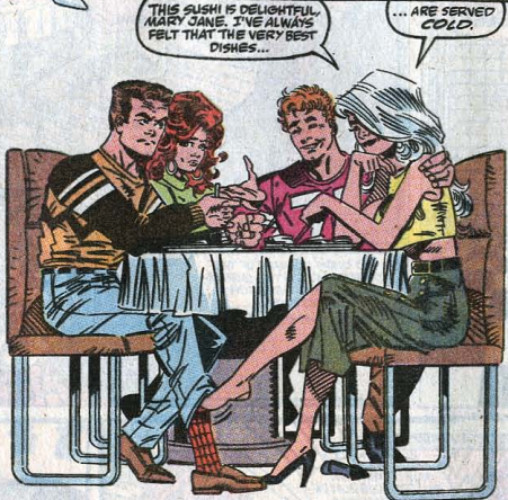 Coming off the “Cosmic Spider-Man” arc, this two-parter is somewhat of a nice palate cleanser. No larger overarching plots determine what’s going on, no crossover sagas to steer us into strange waters. Appropriately small as this arc is, the narrative involved fails to properly flesh out both its primary concept and main characters. “Time for a Punisher crossover,” the creative minds involved seemed to be saying, plucking the vigilante off a wall filled with random “What Do We Do Now?” notes now that the “Cosmic” and “Acts of Vengeance” stories have been nailed shut and buried. Though it introduces some interesting ideas and potentially engaging plot avenues, the story ends up coasting a little down these roadways before coming to a sputtering halt. Michelinie just fails to properly incorporate the Spider-Man/Punisher dynamic in a fresh, invigorating way, giving us a bland story with strange characterization.