A new anti-hero makes his dramatic debut, pushing Spidey to the side in a tale that weaves great combat with mediocre philosophical conflict 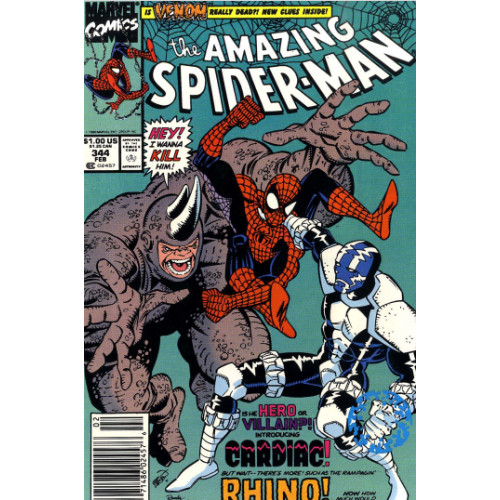 Before we begin, I wish to address the little fact that this marks my 100th “Spider-view” post. This series, for me, sparked a reinvigorated interest in writing that waned post-college. After several stilted attempts, this series became a focal point for me; without it, I would argue I wouldn’t be writing at Hubpages or Geeks Under Grace either. I certainly wouldn’t be writing about Cloak and Dagger, Venom, The Sinister Six, Iron Man, Captain America, Daredevil, Black Panther, Wolverine, or even the Man-Wolf, for crying out loud. Posts have not always been as consistent as I have wished, but regardless, this has become a highly engaging project and one I hope to continue for a long time.

Now while I dry my eyes of the spider-webs, why don’t we move into the post itself?

A rich business owner dedicates his life to fighting crime after making a promise in memory of a deceased loved one. Equipped with his finances and high-tech gadgetry, this remarkable individual becomes a masked vigilante to battle the scions of evil after dusk has fallen over his city.

Such is the mission of Doctor Elias Wertham, aka, “Cardiac.”

What, you thought I was referring to Batman?

Introduced briefly in David Michelinie and Erik Larsen’s “Powerless” story arc, Elias makes his official grand debut here. His motivations are simple and straightforward: similar to how Batman hates guns and wants to stop criminals from using them to end lives and disrupt livelihoods, Cardiac wishes for drug-related crime to cease. But his mission is a little different than his contemporaries Cloak and Dagger–while those two hunt down drug pushers and others who deal in illegal narcotics, Cardiac targets the business side of the trade. Cloak and Dagger take down the street-level dealers; Cardiac suppresses the bad business decisions and poor handling of materials which lead to faulty pharmaceutical practices.

So how does that bring this Batman-“knock-off” into Spidey’s crosshairs? 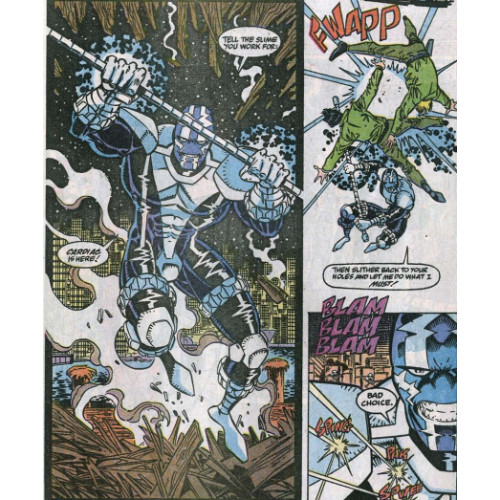 I’ve discussed in two different posts Michelinie’s focus on drug-related story arcs. The first, which featured the Punisher, was based on a ridiculously convoluted plot twist where Michelinie revealed a conspiracy by the U.S. government to replace the gold standard with cocaine. The second, Michelinie’s epic “Return of the Sinister Six” narrative, hinged on a twist late in the game where Doc Ock revealed he was plotting to cure cocaine addicts of their addiction (for his own selfish financial gain later on, natch). Both ideas are goofy in their development and execution, with Michelinie’s emphasis on surprises and twists over genuine commentary.

Cardiac’s involvement, at least, allows Michelinie the opportunity to take a more serious stance on the topic. Instead of a mad scientist with metal tentacles attached to his torso holding dopers’ dependencies hostage, we get a dude in a metal suit, past shrouded in mysterious tragedy, trying to right a wrong he’s got a personal stake in. Over just two issues, we learn Cardiac’s name, occupation, and powers, and we’re even treated to a hint of his backstory. I know Cardiac’s appearances over the last 30 years have been limited (I think the last major arc I read him in was during Dan Slott’s Superior Spider-Man series), but I was genuinely surprised at how much screen-time he was given here. Michelinie seems to have had at least some clear idea of where he wanted to take the character, or at the very least, what kind of character he wanted Cardiac to be. 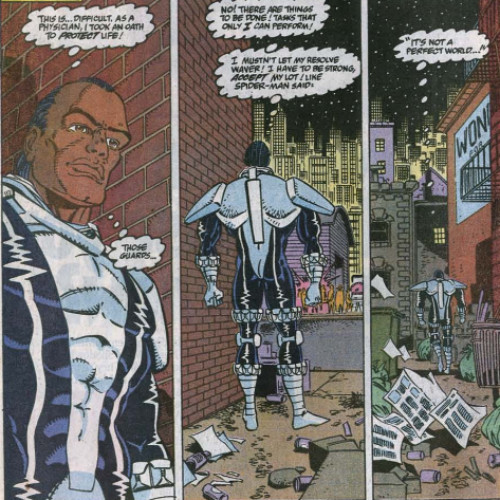 Also refreshing is that Cardiac isn’t a gun-toting maniac like the Punisher, meaning Michelinie gets to a probe a little deeper than Frank Castle’s “I’m gonna kill all these drug pushers” mentality vs. Spidey’s “Hey, I’m not gonna let you kill all these drug pushers” philosophy. The standard conflict is even a little different–Spidey and Frank find common ground in agreeing that drug pushers are bad people who do bad things (thumbs-up for theoretical harmony!), it’s just they disagree in the diplomacy vs. death-dealing departments. Here, as Cardiac attacks Sapirdyne Chemicals, Peter intervenes because, though the company is shipping chemicals used illegally to South America, the business and processes are legit.

So what we get, similar to the Punisher/Spidey conflict, is drama concocted between opposing philosophies. The fact this doesn’t boil down to “Should we or shouldn’t we kill these people?” also gives the tension a slight edge. Neither Punisher nor Cardiac are villains, but Cardiac doesn’t necessarily fit within that anti-hero definition that Frank Castle clearly slots himself into. I mean, Punisher carries a bunch of guns around and wears a skull on his chest. Cardiac carries an electro-shock staff–which, as one other commentator mentioned, essentially makes the guy a walking defibrillator–and is more interested in stopping business transactions and shipments rather than hurting people. Heck, the guy’s a doctor in his day job. He saves lives. Cardiac’s a more difficult character to define, and I find that more engaging than Castle’s “shoot first, ask questions only if anyone is still alive” methodology. 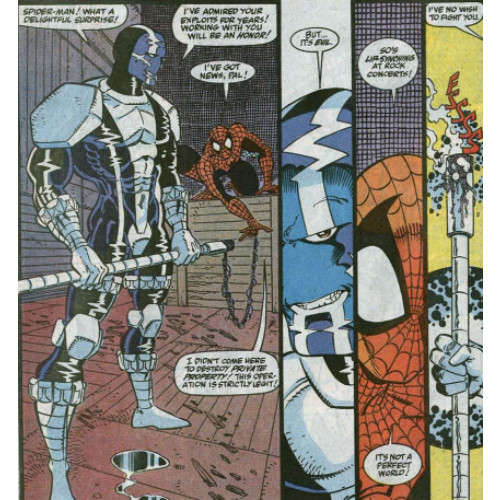 What hinders Michelinie’s process, however, is Spidey’s insistence on the legality of Sapirdyne’s actions. I mean, yeah, from a real world standpoint, Spidey’s right–nobody can just go barging into a business on suspicions of illicit activity and vigilante-dive bomb them into oblivion. We’ve got legal processes to help settle those situations, a right way to handle those circumstances. I think if Spidey remarked on those processes (or even debated with Cardiac the effectiveness of those processes) or commented on Cardiac’s intentions vs. his actions, I would be a tad more convinced.

As we see, though he creates engaging philosophical tension between his two protagonists, Michelinie doesn’t execute it terribly well tangibly. Spidey insists on his way of thinking, even accepting an offer from Sapirdyne’s head honcho through Silver "shameless plug to previous arc where she appeared" Sable to bring Cardiac down. Spidey justifies the deal immediately on the next page–really it’s a reason for him to find Cardiac again–but there’s little discussion from our webbed wonder as to alternative methods. He’s focused on finding Cardiac and taking him out. Cardiac’s intentions may be noble, but I’ve still got to stop him! he grouses at one point. There’s this bizarrely antagonistic angle to Spidey’s treatment towards Cardiac which I don’t quite get. He’s not even this aggressive towards the Punisher! As a result, the conflict between the two, though founded on interestingly diverse principles, feels forced, sort of like the main tension in Batman v. Superman. “Let them fight,” as Ken Watanabe said in Godzilla. 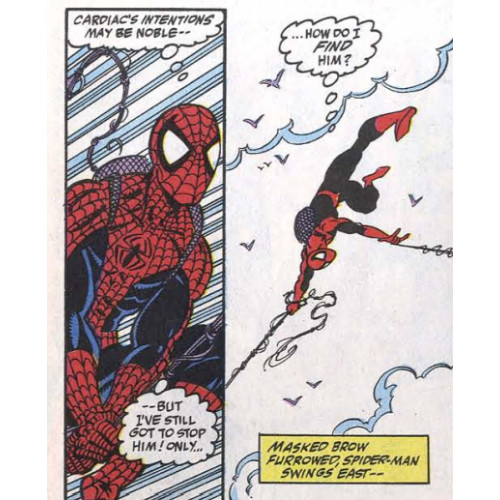 I mean, yeah, I am down for skirmishes, scrapes, and scuffles of all kinds, but I always appreciate a decent narrative reason behind said slugfests. Later battles between the two men and a principle antagonist (the Rhino in ASM #344 and Boomerang in ASM #345) feel more plot-driven and necessary. I get a kick out of Rhino any time he appears (I neglected to include a prior arc where he showed up), and this is really the first time I get to talk about him a bit more in this blog (aside from a reference in a “Cosmic Spider-Man” chapter where he briefly appeared). His fight with Spidey and Cardiac is highly engaging, especially visually, as he tests out a new suit against both men. The design is simple yet effective; gone is some ornamentation seen in prior suits, meaning the outfit feels more streamlined. I was reminded of John Romita’s original design for the character, first seen in ASM # 41. Larsen’s version is less bulky, meaning the Rhino does some very un-Rhino actions like climb a ladder, which I suppose is a nice development for a guy whose main shtick is to charge at people. 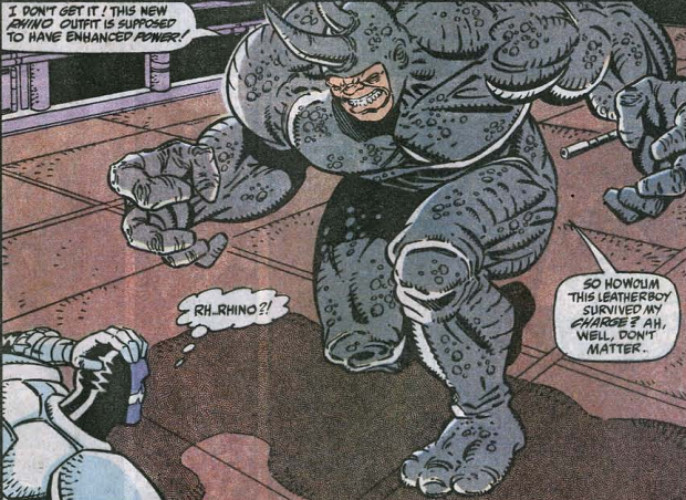 Mark Bagley makes his ASM debut in issue #345, and his Spidey/Cardiac/Boomerang fight proves the skills he would continue developing over the years. He’s respectful to the work of others, particularly in how he maintains the Cardiac design introduced by Larsen in the previous issue. The final fight with Boomerang is well-illustrated, and Bagley delivers on some entertaining visuals–my favorite moment has Cardiac cut through a Sapirdyne ship as he proclaims victory over his pharmaceutical foes. Even here, as in his contributions to the “Atlantic Attacks” and “Evolutionary War” crossovers, his style feels very close to the later illustrations he’d craft on future ASM issues and his Ultimate Spider-Man run with Brian Michael Bendis. Still, the transition from Larsen to Bagley is painless, and I’ll appreciate watching the latter develop his unique style in later stories.

As an aside, I’m only disappointed Bagley doesn’t get much of a chance to draw an iceberg lair Justin Hammer, the man behind Sapirdyne, utilizes; visually, the hideout is really neat and just a tad cooler (yeah, that’s a pun) than a houseboat/island Michelinie gave the aged antagonist in his famous “Demon in a Bottle” arc over in Invincible Iron Man. Gotta give Michelinie props for those clever lairs. 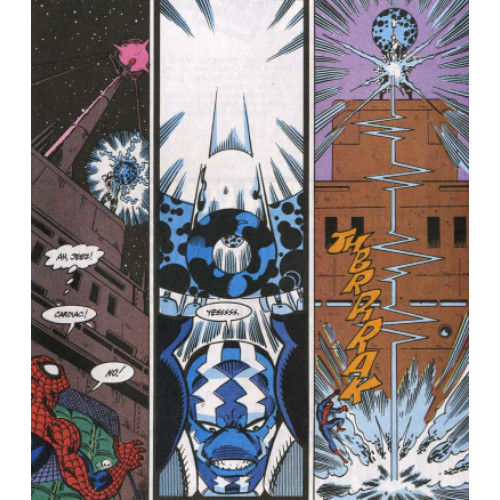 Also notable in this arc is Michelinie’s subplotting. I’ve noted this in previous posts, but I do appreciate the forethought with which Michelinie pens his scripts. He always seems to have an idea of where he wants certain characters to go or how he wishes to shape future stories. Here, we witness Eddie Brock break free from prison, aided by the symbiote he thought was dead. As Venom escapes, a bit of symbiote is left behind, close to Eddie’s cellmate, a certain Cletus Kasady… 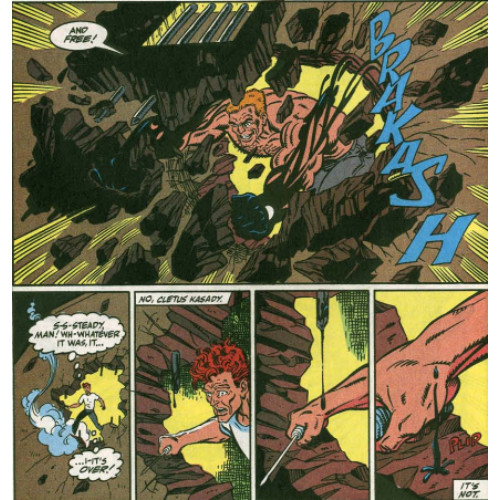 But, y’know, that’ll never turn into anything. Pssh.

Thus, we have ourselves a story that is, mostly, narratively and visually appealing. Cardiac is a complex character from the get-go. We receive just enough backstory to keep us interested, just enough hints to promise future development. His methods and intentions put him into full-throttle anti-hero mode, but I appreciate that Michelinie makes him stand apart from characters like the Punisher, Wolverine, or later incarnations of Venom. Elias is a doctor foremost, even taking a brief moment to analyze the carnage he wroughts and question its worth. Where Michelinie finds himself lacking in his use of his title character–Spidey feels a bit too aggressive towards Cardiac, too easily swayed to a particular side instead of trying to be understanding. Like some tales, Michelinie just bobbles the ball when it comes to injecting larger commentary. Still, if you want high-stakes action with engaging characters and good promises with excellent pay-offs later on, this might be a little tale you want to pay attention to.