Spider-view: “The Fear and the Fury” (Cosmic Spider-Man, Part 7)

Gerry Conway does his best to inject some unique, thoughtful concepts into this messy, meandering crossover arc 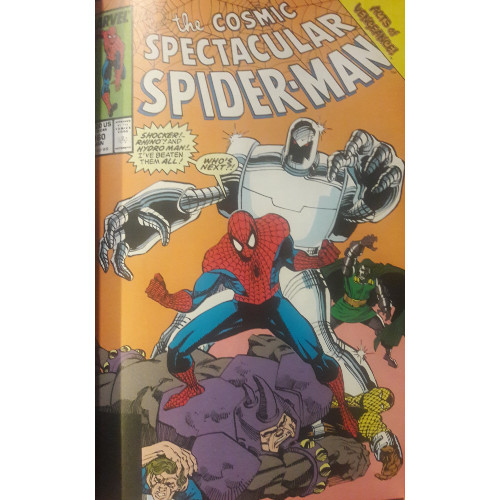 Graviton. The Trapster. Titania. The Brothers Grimm. Goliath. All have fallen before the magnificent might of the cosmically-charged Spider-Man. Even Magneto was given a run for his money. Heck, Spidey punched the Hulk into space. The Hulk. Into space. And then he saved old Grayskin, braving the airless cosmos to bring Bruce Banner’s wrong-side-of-the-bed-cranky alter ego back to Earth.

For all his might, however, Spidey has been unable to deliver a more powerful story. The narrative capabilities of this “Acts of Vengeance” crossover feel muddled and mis-woven at moments. I chalk it up to various writers and artists each approaching the core concepts with different strokes, plus their attempts at weaving together this “Cosmic Spidey” arc with the crossover in question.

We’ve had fight scene after fight scene, with a couple of dips into the philosophy pool to awkwardly try and balance out all the action. Fortunately, for this issue, the masterful Gerry Conway returns. Maybe he can up the analytical ante for a story arc possessing less steam than one of Spidey’s patent-pending power punches.

“The Fear and the Fury” 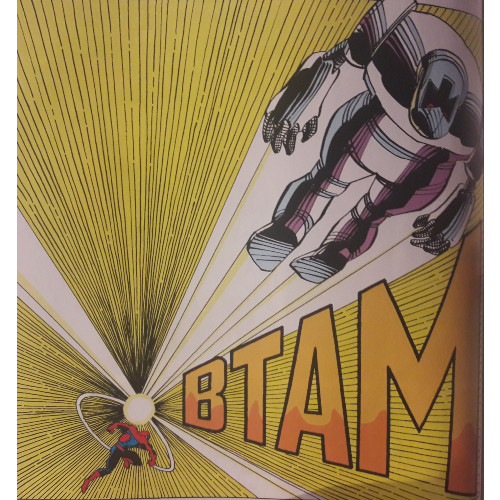 Subtitled “The Metal in Men’s Souls,” this latest SSM issue certainly seems like it’s heading down a deeper path. So much of the previous issues of late have been bouts of fisticuffs between Spidey and several adversaries, each seemingly stronger than the last. And if the not-so-Jade (yet-still-a) Giant can’t cap our Web-Headed Wonder, who the heck has a shot?

Conway wisely redirects the purposes of the action sequences in this issue, giving Spidey a robotic adversary in the form of T.E.S.S.-1. Standing for “Total Elimination of Super-Soldiers,” T.E.S.S.-1 (probably short for T.H.E.R.E.S.A.-1) is sicced on Spidey by Doctor Doom and his band of on-high supervillain buddies. Doom’s machinations are somewhat obscure, hidden beneath the guise of requesting T.E.S.S. eliminate (hence the name) our super-powered Spidey. Conway weaves in a bit of Doom’s erstwhile plotting, similar to how Michelinie wove in Sebastian Shaw’s ulterior motives in Amazing Spider-Man #328.

Was this a thing throughout the entire “Acts of Vengeance” crossover? Like before, my obliviousness hinders me. But we’ve got several supervillains teaming with each other and, simultaneously, scheming against their brothers-in-arms. I can’t tell you if this was a part of the larger “Acts” plot or just a requisite symptom of the supervillain mindset. How many times have we seen bad guys betray bad guys because...well, they’re bad guys?

Conway more strongly hints at the notion than overtly discusses it; he certainly brings Doom’s callousness to the fore in an early scene where Doom murders an inept underling. And other bits and pieces in prior issues have hinted at Doom’s plotting (though, as stories such as Marvel Super Heroes Secret Wars can attest, Doom’s always been a “plan within a plan” kinda guy). It’s an interesting notion, one which adds a strand of intrigue to the proceedings. 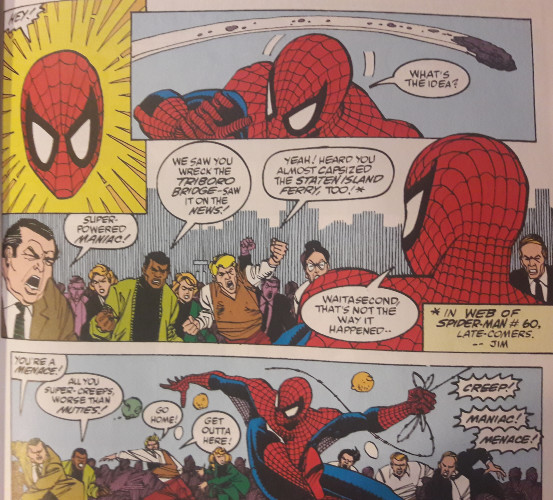 Conway, more than Michelinie, has the best handle of the various plots going on. Maybe it’s a side effect of Conway writing two titles--Spectacular Spider-Man and Web of Spider-Man--but he has a somewhat better grasp on what’s going on. This issue, as in WSM #60, shows Conway capably weaving together seemingly disparate plot points. The “Cosmic Spidey” narrative comes to a head in this issue. For a few chapters now, Spidey’s started doubting the wonder of his new abilities. “With greater power comes a greater responsibility,” to paraphrase an old, familiar adage. “And greater cost,” you might add. Spidey’s found his new abilities come with not only a greater need for control but also an increased criticism from the general public: the guy they’ve often viewed as a menace can now blast Shocker, the Rhino, and Hydro Man through a building all at once. The dude who J. Jonah Jameson has decried as a menace for years finally shows the true damage he can do.

Another idea percolates through this issue, voiced interestingly enough by the aforementioned Jameson. Our stalwart publisher--who we’ve previously watched grouse to Peter about losing the Daily Bugle to Thomas Fireheart--bemoans his inability to publish his anti-superhero message when America seems ripe for reading it. “Acts of Vengeance” seems to have pushed such sentiment to the edge, and Spidey becomes a veritable symbol of that concept. Always loathed by the public, Spidey finds himself up against a wall. It’s when Spidey’s at his strongest that he also seems to be at his most hated. The powers he could use for even greater feats of heroism end up backfiring. 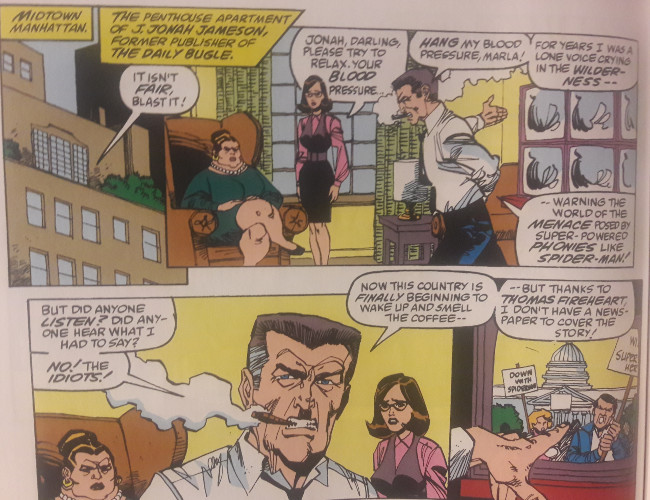 The responsibility surrounding Spidey’s new abilities has been hinted at before--during a battle with Magneto, courtesy of Michelinie and Erik Larson, as well as Conway during a confrontation with Goliath--but Conway gives it an interesting face in the form of the people Spidey interacts with. An angry crowd nips at his heels when his fight against Shocker, Rhino, and Hydro Man causes property damage. Peter snaps at MJ when she comments on his well-being, questioning the brutal way he metes out justice against his adversaries. Previously, Aunt May had discussed with Peter the inability of man to wield godlike powers; that discussion bears fruit here, with Peter finally perceiving the unforeseen consequences to his actions.

Conway is trying his darndest to play with the theoretical possibilities posed by both “Acts of Vengeance” and the “Cosmic Spider-Man” story arc. At its core, “Acts of Vengeance” should be fascinating: what really happens when villains decide to mix it up and go after different heroes? This has, in part, played out interestingly in a handful of stories. Magento faced Spidey in an epic confrontation, thanks to Erik Larson, a battle which is probably the highlight of this entire saga. But the idea, as I’ve noted, has grown stale. It’s why you eventually have Sebastian Shaw siccing the Hulk on our Spider-pal; it’s why this random robot is sent by Doctor Doom to cross swords with Spidey. 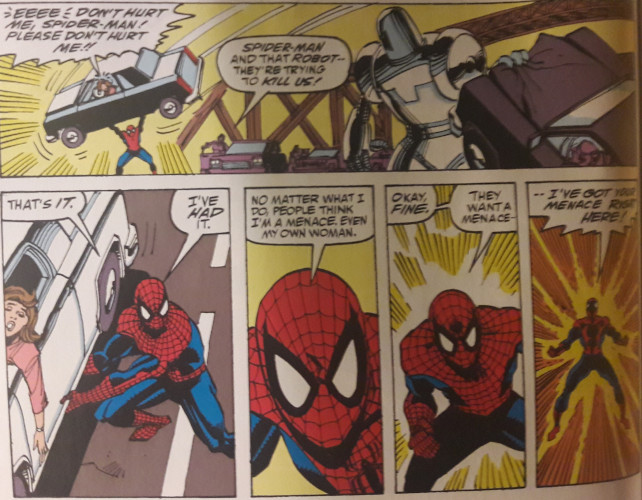 Yet Conway, intriguingly, tries to tie the two stories together. There’s a certain amount of comedy, perhaps even irony, at villains deciding to switch things up just as Spidey is blessed with a shot of cosmically-charged steroids. Add in Spidey’s ever-decreasing stance with the public, made worse by the powers he’s used to successfully battle the Hulk and Magneto among others, and you get a recipe for a genuinely interesting concept. Just when Spidey could use these powers the most does he find he actually needs them the least. Just when a horde of supervillains falls like tenpins before his mighty blows--with stunning feats of power he’s never been able to unleash previously--does Spidey watch your average Joe flee the scene too, terrified of a hero they already mistrust.

Spidey is the perpetual loser, the king of “I can’t do anything right.” He’s right up there with Charlie Brown as “most likely comic character to foul up just when things should be going well.” And I think Conway sees the characterization behind that idea. People cheer when Superman speeds through Metropolis, but Spidey shows up on the scene...well, our bug-eyed buddy just cannot catch a break. These notions feel a little subtextual, hidden beneath the ho-hum of yet another bout of fisticuffs. It’s certainly better than Conway’s earlier attempts at injecting philosophizing through his poorly chosen mouthpiece: Aunt May. At times, however, it still feels a little disparate. Even writing this, I wonder if I’m pulling too much out of a story which never intended to convey certain ideas. Still, Conway tries. As fun as it is watching Spidey slug it out with the Hulk, Michelinie’s most recent issue lacked depth (well, not literally...the gray guy was punched into space, after all). Here, at least, Conway toys with a couple different ideas, highlighting the often tenuous tethers between the “Acts of Vengeance” and “Cosmic Spidey” arcs and finding a couple of decent connections to graft these two tales together.