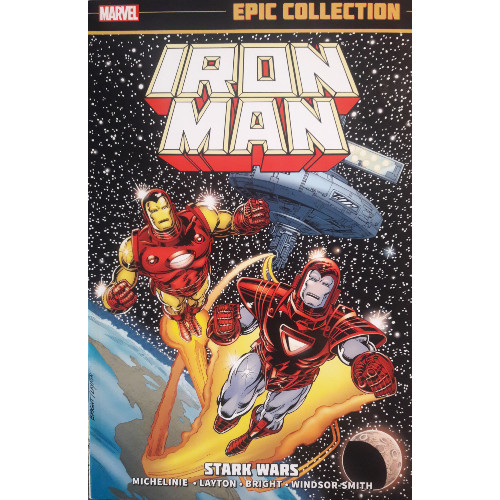 Since we recently examined a standalone Amazing Spider-Man issue written and illustrated by Bob Layton, I figured we could take a look at another 80s story he contributed to over in the pages of Invincible Iron Man. As I mentioned in that post, Layton was a co-writer of the infamous "Demon in a Bottle" story arc, working with David Michelinie to craft one of the most influential Iron Man narratives of all time. Both Layton and Michelinie return for this arc, a much-longer, winding trek into the life of the rich, famous, and metal-plated Anthony "Tony" Stark.

A brilliant futurist and idealist, Stark always builds with tomorrow in mind. It’s 1987, and one of the foremost geniuses in the Marvel Universe is just opening his newest company, Stark Enterprises, in Los Angeles. Tony’s been through a lot in the last couple years, including a few dangerous brushes with alcoholism and the loss of his former company, Stark International, to business rival Jeff Bridges...I mean, Obadiah Stane. Stark Enterprises is a step in a new direction for the business mogul as he works to pull himself from the depths he fell into.

He’ll find it isn’t an easy road, unfortunately. Stark soon discovers that armor and weapons designs of his have been stolen by another rival and applied to technology used by some of the fiercest villains in the world. Titanium Man. Crimson Dynamo. The Controller. Beetle? Stilt Man?!? Say it ain’t so! Enraged at the thefts, Stark feels personally responsible for ensuring these men are no longer able to use his inventions for criminal gain. Sounds great, right? Except, Stark also finds this adventure will lead him to butting heads with some old friends, as not even the good guys are completely safe from the wrath of Iron Man. Is the fallout worth it? 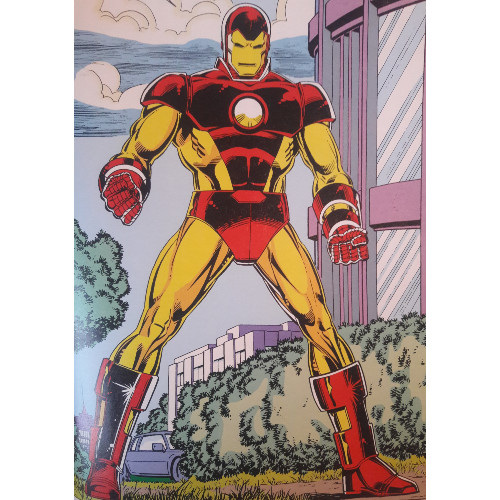 Known alternatively as “Armor Wars” (at least, in some trade paperback versions), this late-80s Iron Man epic technically spanned a total of 18 issues and an annual; though the “Stark Wars” story arc is really contained to six issues, the preceding 12 are important for building up to Michelinie’s saga and are regularly considered a “prologue” to the tale. Fortunately, both the prologue and "Armor Wars" story make the cut for this Epic Collection. And Michelinie builds well, pulling you into a world where Stark has recently triumphed over a terrifying foe in the guise of former rival Obadiah Stane.

You can’t easily tell that Michelinie is ramping up to a bigger story as you read through these initial issues. That doesn’t mean the first 12 chapters aren’t exciting or entertaining. From the get-go, problems plague Stark and keep him on his toes. Michelinie features an impressive array of locales and situations. If “Iron Man vs. AIM aboard a crippled space station” isn’t your forte, maybe you’ll enjoy “Iron Man saves an island nation,” “Iron Man fights Russian spies underwater,” or “Iron Man is late to his own housewarming party because of mudslides and pregnant mothers.” The action is constant and always moving, never becoming repetitive or stale. 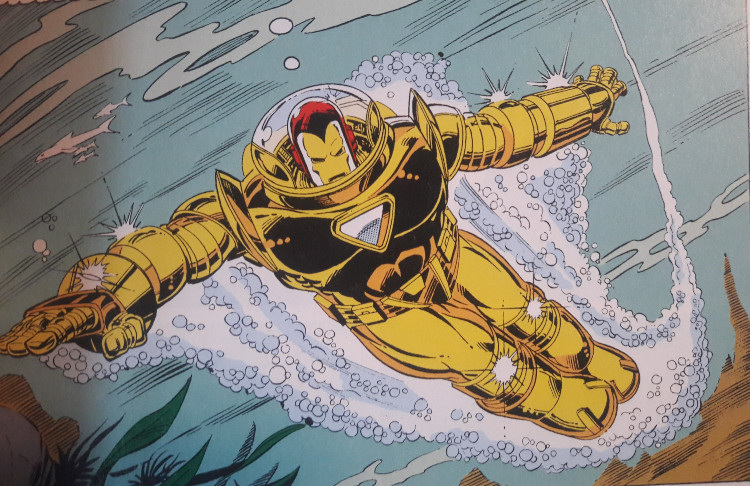 Michelinie’s character work is just as engaging. Tony Stark may be a billionaire capable of constructing whole companies when he isn’t fighting spies, supervillains, and saboteurs as Iron Man, but that doesn’t mean he isn’t relatable. Stark’s practical, hands-on approach to running his company and designing his own technology keeps him from appearing haughty and aloof; his varied relationships with women, though perhaps not biblically monogamous, don’t come across as vapid or objective; his heroic actions as Iron Man make sure both halves of the character are endeared to the reader. In the background, supporting cast members such as James Rhodes and Marcy Pearson are given almost as much weight. Rhodey, Stark’s best friend and closest confidant, sticks with the man through thick and thin; Marcy, introduced to and hired by Stark, proves an interesting character who, as the story goes on, may not be wholly comfortable with Iron Man’s activities.

As the prologue issues give way to the main “Stark Wars” arc, Michelinie moves Stark in a decidedly unique direction: from superhero to mercenary. Limited in asserting legal methods of retrieving his technology, Stark believes he has no other choice than to take matters into his own metal mitts. He goes after several armored supervillains after compiling a list of suspects illegally downloaded from a rival company’s database; the “hit list” eventually extends to incorporate the Mandroids, armored S.H.I.E.L.D. units utilizing Stark technology, and the Guardsmen, another government-sanctioned group of battle suit-wearing operatives.

At first glance, I thought Stark’s crusade would feel boring or repetitive. Find bad guy using stolen technology, smash bad guy using stolen technology, rinse, repeat. Yet Michelinie inserts enough dramatic action and entertaining sequences to keep the story flowing. In one instance, Stark fights Stilt Man in a fairly one-sided, mano-a-mano exchange of the old iron fisticuffs. In others, Stark finds himself breaking up a hypnotized religious cult, fighting armored thieves aboard a military cargo plane, chasing a reserve Avengers member through the ocean’s depths, and infiltrating a military installation and coming to blows with Captain America (who, at this time, was going by the simpler moniker “The Captain”). Similar to how Michelinie upped the stakes and kept the action moving throughout the prologue issues, he attacks the main narrative with fervor.

As he crafts action sequence upon action sequence, Michelinie strives to make a point here: how far do you go to fix a wrong? And is it possible to justify one’s own deceptive actions if something good is born from them? Stark consistently voices his dislike of going after his foes in this violent, occasionally illegal manner, working to distance himself from his Iron Man image as a result. But are fraying relations between him and the West Coast Avengers, suspicions from Nick Fury and S.H.I.E.L.D., a growing distrust from the public eye towards Iron Man, and (perhaps hardest-hitting) sheer disappointment from a betrayed Captain America worth paying?

The answer to those questions straddles the line between “yes” and “no.” Though Stark may utter his frustration in needing to battle allies and make tough choices to immobilize his stolen technology, he goes along with the plot anyway. Michelinie’s questions, though thought-provoking, don’t necessarily receive the deep moral dive they deserve. You know from the onset that Stark is going to do whatever it takes to remove his tech from his enemies’ grasp--the story is called “Stark Wars,” not “Stark Twiddles His Thumbs.” His legal eagles may play a role in approaching the issue from a lawful angle, but they’re stonewalled the whole time. Stark’s defense that he has no other option rings a little hollow once you realize the story would suffer if we spent page after page observing legal proceedings. Michelinie acknowledges Stark is at least moving somewhat down the law-abiding avenue, but come on, it’s nowhere near as fun as watching Iron Man fight some of his greatest foes! The story is thus served by our characters’ actions and motivations, even if those decisions seem a tad far-fetched and make the story feel less than realistic; at some point, you just have to shrug your shoulders and go with it. 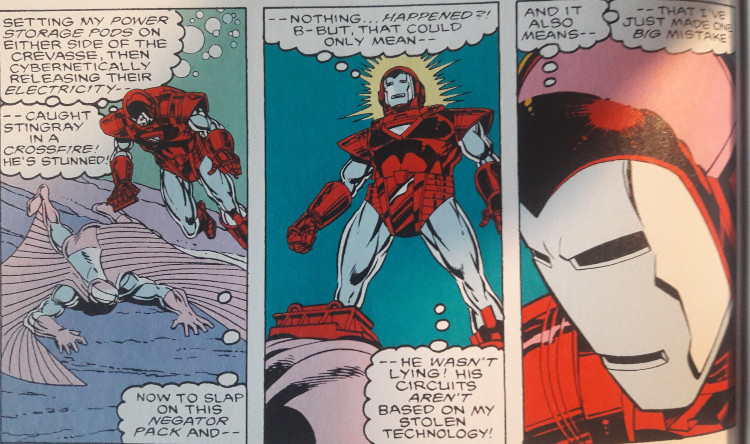 One other minor complaint I'll mention is this story's similarity to "Demon in a Bottle." Dealing with Stark's first serious brush with alcohol, "Demon" shares a surprising number of commonalities with "Stark Wars"--Iron Man battles a team comprised of Whiplash and Blizzard in both arcs; Justin Hammer waddles around, scheming in his purple bathrobe aboard larger-than-life home vessels; Stark is forced to publicly distance himself from Iron Man; Stark also hires former thief Scott Lang, the second Ant Man, for some B&E Iron Man fights a variety of other armored foes in both tales, including the Beetle and Spymaster; Stark has some important scenes with Captain America; and both Michelinie and Bob Layton contributed to both tales. The similarities aren't huge, nor do they detract from each narrative's overall focus--"Demon" dealing with alcohol addiction and "Stark Wars" with corporate espionage--but there are hints here and there that conflated the two tales in my mind.

Michelinie, alongside artist Barry Windsor-Smith, should be praised for the final issue of "Stark Wars," an epilogue largely taking place in a dream sequence. Here is where Michelinie’s philosophical quandaries arise to fuller potential, burdening Stark with the weight of his actions. Deep within a gorgeously-constructed nightmare by Windsor-Smith, Stark is truly challenged by all that has gone on in the previous issues of “Stark Wars.” The issue is haunting and surprisingly deep, packing in some of the moral/immoral struggles other chapters gloss over. Does the sequence completely make up for Michelinie’s less-than-stellar focus on the subjects of personal responsibility in earlier issues? No, but it reads well enough that you don’t necessarily feel like Michelinie is rushing to provide commentary at the last second. Compared to Michelinie’s other action-heavy scripts, this issue is more insightful and provides a smoother reading experience as Stark reflects on the horrors he witnessed and unintentionally caused. Stark is a burdened man in these issues, weighed down by a monster he inadvertently created. 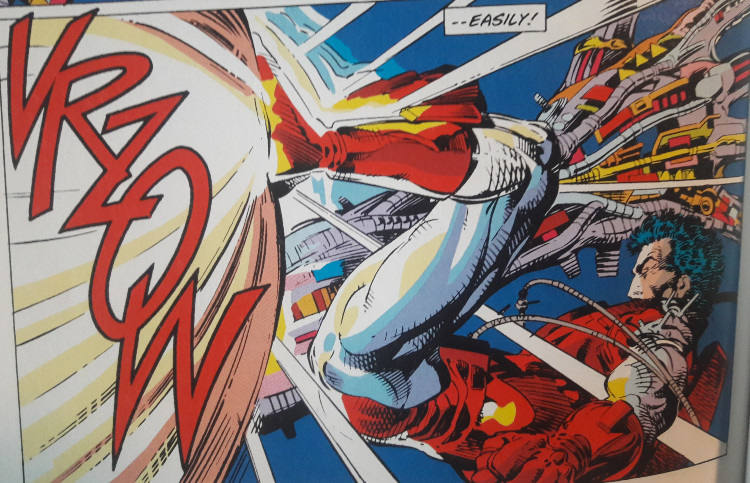 As a whole, “Stark Wars” is an engaging, fantastically self-contained epic. As a fan who consistently feels inundated by the sheer amount of material one has to peruse these days to grasp an entire story, I enjoyed relaxing and just soaking in issues that comprised the prologue and main arc. I do feel somewhat compelled to read what comes next in Invincible Iron Man, just to see how fully Michelinie caps the arc, but until that day arrives, I’m satisfied. The Epic Collection line editors were wise to include both the prologue and the main story in this volume. Though some of the fallout may not be explored in this volume, the "Stark Wars" narrative feels tidy and complete by time the Windsor-Smith issue is finished. I'm not sure if "Stark Wars" will ever quite live up to "Demon in a Bottle," but it comes close in the entertainment department. Considering Marvel and Disney+ seem to be adapting some parts of this arc for a Don Cheadle-led War Machine series, it seems there's no better time than now to check out this classic narrative.