This classic Iron Man arc tells a powerful story of addiction and redemption as Tony Stark fights his greatest enemy: himself 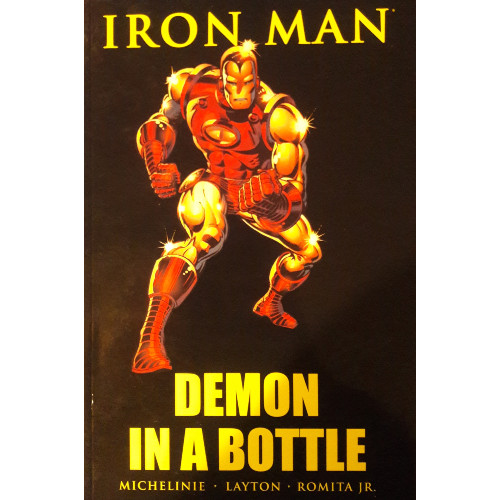 When Stan Lee first came up with the character of Iron Man, he faced a challenge: how was he going to make a handsome billionaire relatable? How could a nation of readers ever relate to the suave, mustachioed Tony Stark, who walked about with a woman on each arm and all the luxuries money could afford? Simple. Lee damaged him. Placing the weapons developer in the jungles of Vietnam, Lee afflicted Stark with a heart injury that helped the man see his wounds went much deeper than just the shrapnel creeping through his chest. Stark didn’t need just to save his physical heart; he needed to change it too.

Writer David Michelinie faces a similar challenge, but with a twist. He, too, damages Stark, but in a wholly different way. Lee hurt Stark via an incident outside his control; Michelinie uses “Demon in a Bottle” to hurt Stark through an internal foe. As a result, the story has become one of the most celebrated Iron Man arcs of all time, bringing Stark to a dark edge and seeing how the genius-billionaire-playboy-philanthropist responds.

I haven't reviewed an Iron Man story since "Stark Wars." Sure, I've tackled a couple tales where other men (like James "Rhodey" Rhodes and Tony's descendant Arno Stark) wore the Iron Man armor, but this is my first foray into Tony's distant past in a little over a year. Appropriately enough, Michelinie (the scribe behind "Stark Wars" and a few recent Amazing Spider-Man arcs we've examined involving drugs, Venom, and the Sinister Six) penned this famed story arc; though it takes place a few years before "Stark Wars," I hope you won't mind us sliding back in time as we examine this story of addiction, adversity, and Tony's triumph over his alcoholic enemy.

“Iron Man: Demon in a Bottle” 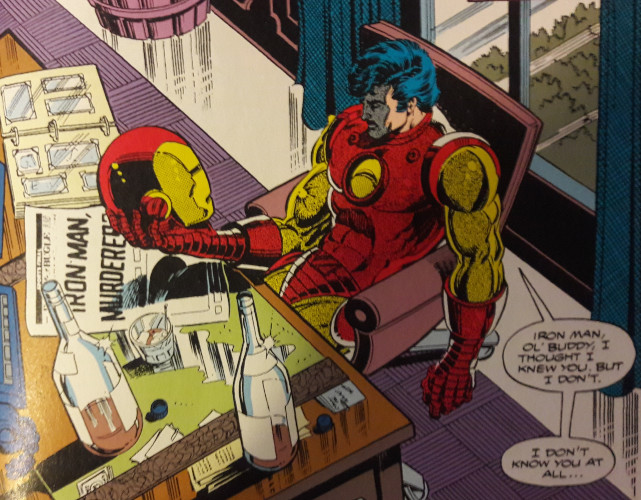 It should go without saying, if you’re this far into the review, that “Demon in a Bottle” deals with Tony Stark’s first serious brush with alcoholism. I don’t know enough of the character’s history to know if other writers had brought up Stark’s predilection for drinking prior to this tale, but Michelinie weaponizes the addiction. Michelinie’s Stark isn’t just a hero or businessman; he’s a broken individual, stuck in a destructive pattern of behavior.

I’ve been very fortunate to not have alcoholism play into my family’s history significantly, or for much of that limited history to spill over into my life; I do realize, however, the weight and turmoil of alcohol addiction. I know people personally struggle or have dealt (or deal) with loved ones who struggle through years of addiction and trauma. That being said, Michelinie handles the subject matter with grace aplomb, drawing attention to the problem tastefully. 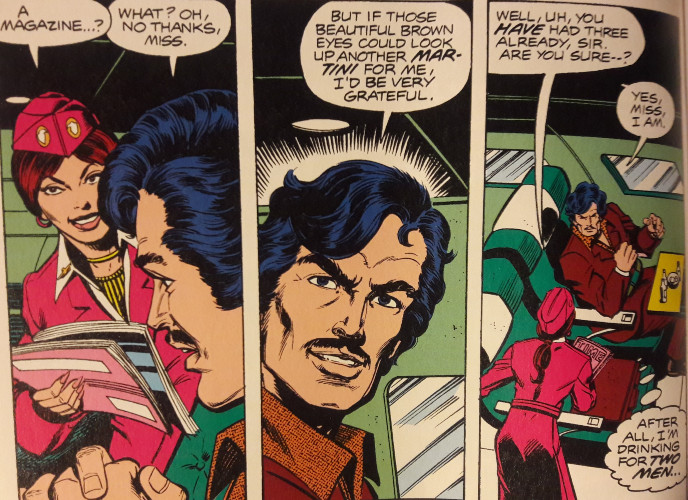 Spanning issues #120-128 of the Invincible Iron Man, “Demon in a Bottle” is as much a Tony Stark story as it is an Iron Man arc. Stark is a man encumbered--secret espionage agency S.H.I.E.L.D. is encroaching upon his company Stark Enterprises; Justin Hammer is plotting against him and manipulating his Iron Man armor; his relationship with then-love interest Bethany Cabe experiences its ups-and-downs. Personally and professionally, Stark confronts emotional assaults from all fronts. In his quieter moments, he pours himself liquid courage here or there to soothe the hurt. He orders a martini on a plane ride, has drinks with dinner, casually handles a glass during conversations.

Fascinatingly, for the first several issues, Michelinie and artists Romita Jr. and Infantino depict Stark’s drinking as not even remotely dangerous. Few characters focus on the issue early on; in fact, whole conversations surround other topics while Stark takes a drink or two. The act is seen as casual, harmless, almost a hobby. When characters do chide Stark, it’s when he’s had one drink too many; even this is treated almost like happenstance, as if Stark’s penchant is a one-time or infrequent occurrence. Romita Jr. and Infantino draw little visual attention to Stark’s drinking, seamlessly weaving it into the narrative. Readers nowadays may be familiar enough with the story’s premise to notice Stark’s consistent dependency on alcohol, but I wonder if fans reading this story when it was initially published were surprised when Michelinie revealed the extent of Stark’s problems. 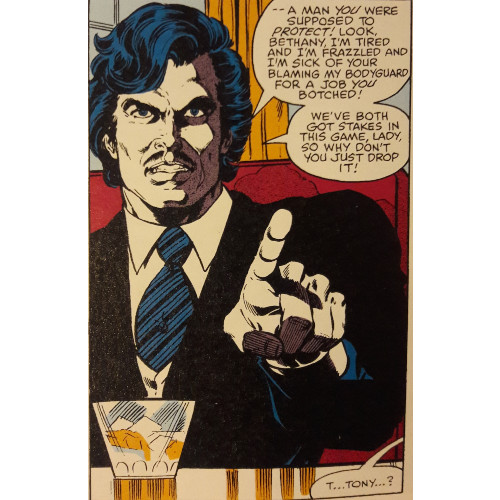 As the story progresses, the implications of Stark’s actions become clearer: he appears at his offices bedraggled, he yells at and insults longtime Avengers butler Jarvis, misses an important meeting between him and Bethany. In certain instances, Michelinie implies that Stark’s drinking compounds already-existing problems outside of Stark’s control, but in several cases late in the narrative, Michelinie places the blame squarely on Stark’s inebriated decision-making. As a reader, you watch the man spiral downward, a descent beginning and ending with his dependency. Michelinie brings the problem to the fore, pointing a finger at the issue at hand and detailing the consequences. 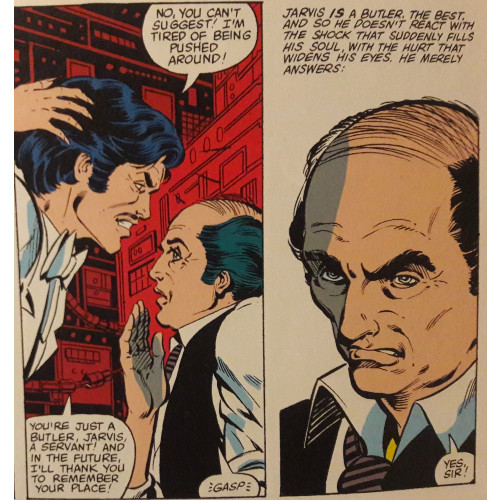 Culminating in the arc’s final issue, "Demon in a Bottle" pushes Tony Stark to action. Initially rushing headlong into an unbalanced solution--“Since Tony Stark is behind all my problems, I’ll just stop being Tony Stark!” a tipsy Tony decides early on--our ferrous friend quickly realizes his error. Tony Stark may be the problem, but removing “Tony Stark” from the equation won’t solve anything. Stark’s attitude and problems are merely symptoms of a deeper issue. Guided by good friends, Stark begins the long battle towards sobriety. Future stories will have Stark face his liquid enemy again, but Michelinie ends the tale on a more victorious note, giving Stark at least the understanding that he can fight his impulses...if he so chooses. 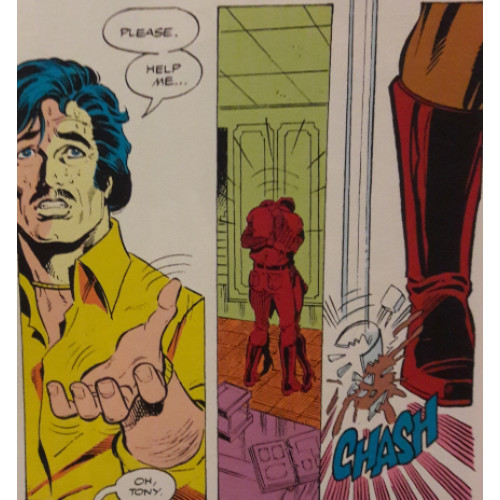 Woven in-between panels of Stark raising glasses to his lips is a bitter rivalry between Iron Man and Justin Hammer. Introduced in this story, Hammer plots vigorously against Iron Man, exploiting weaknesses to his advantage to add to Stark’s worries. He goes so far as to gather several armored foes--including the Beetle, Whiplash, the Porcupine, the Melter, Constrictor, Leap Frog, and Blizzard--in a visually rewarding sequence that aptly displays John Romita Jr.’s skills. Romita Jr.’s style, at this time, has not yet developed its instantly recognizable traits seen in later stories but still packs in detail and action when necessary. His style here just happens to be more aligned with his work done on "Nothing Can Stop the Juggernaut" rather than his more iconic visuals found in his later work on Amazing Spider-Man with J. Michael Straczynski, Reginald Hudlin's "Who is the Black Panther?" story, Mark Millar's "Wolverine: Enemy of the State" arc, or even his late 80s work on Uncanny X-Men.

Michelinie and Romita Jr. aren’t afraid to get their hands dirty, delivering emotional blow after emotional blow. Hammer’s assault is ruthless, and an image where his machinations lead to the death of an innocent man feels remarkably violent and poignant for 1979. Again, the incident is framed as a situation outside of Stark’s control. On second glance, however, you see how Stark’s own poor choices lead him to a position of vulnerability and mechanical manipulation that allow this moment to occur. 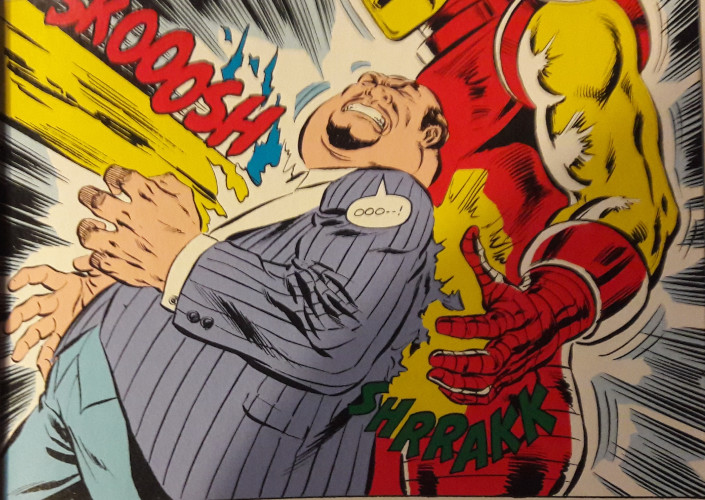 At first blush, the Justin Hammer story takes center stage, and this seemingly central narrative is by no means poor. Action and intrigue run amok: Stark fights foes in a high-end casino, on French beaches, on a floating supervillain base/houseboat. It's fairly similar to struggles Michelinie later created during "Stark Wars," which also features a bevy of armored adversaries, some of whom are featured in "Demon in a Bottle." But for this arc, Stark’s dual identity as billionaire and bodyguard/superhero play havoc on the story as Stark juggles two sides of himself that can’t necessarily be treated as disparate pieces.

Masterful as he is at weaving conflict, Michelinie can’t fully rescue himself from getting bogged down in exposition. His writing is clever, but the arc’s third issue slows down considerably. After battling against and then alongside Prince Namor, Iron Man begins a long flight home across the ocean. Michelinie uses the hum-drum excursion to turn back the clock and retell Iron Man’s origin story. Fans unfamiliar with the tale may find the experience rewarding. Readers familiar with Stark’s origins, via the comics or the first Iron Man film, are in for some unnecessary repetition. Michelinie’s retelling doesn’t add any new dimension to Stan Lee’s original tale, nor does it reveal any deep truth about Stark or his superhero counterpart. Readers could easily skip this chapter and not have it affect “Demon in a Bottle” whatsoever. 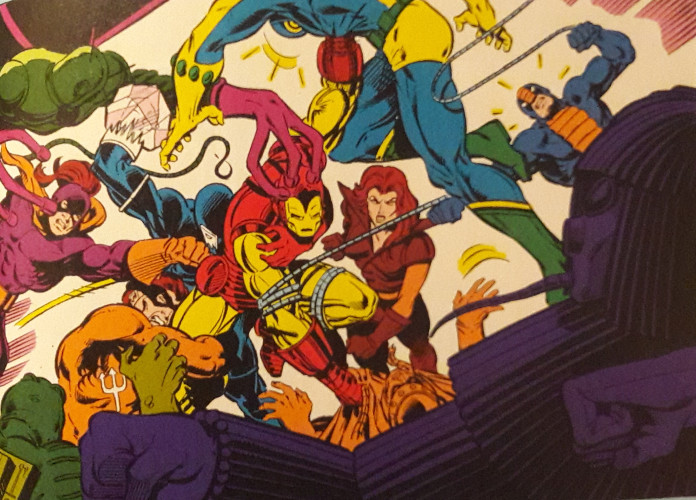 Aside from this small issue, “Demon in a Bottle” maintains its status as the classic Iron Man epic fans have proclaimed it to be for decades. For the most part, Michelinie’s writing is sharp and purposeful, guiding Tony Stark through a dark, personal tale...yet not one depleted of redemption. Michelinie transforms Stark into a character readers can easily identify with, whether they have dealt with alcohol addiction or not. Anyone who has wrestled with an internal problem or addiction can understand Stark. You feel his reliance on the bottled demon, his struggle as he valiantly fights to regain control. Temptation abounds, but as Michelinie and Romita Jr. portray, temptation is not the end. Life is not a series of dark tugs and pulls on the heart; there can be victory, demons can be overcome. It’s only when Tony realizes he doesn’t need to follow his urges every time that he starts fighting. Just because the bottle sits open on the table doesn’t mean it needs to be used. Stark learns to seal it up and toss it out, forsaking the dark genie once he sees it's not the solution or salvation he initially believed it was.