Spider-view: “Man of the Year” 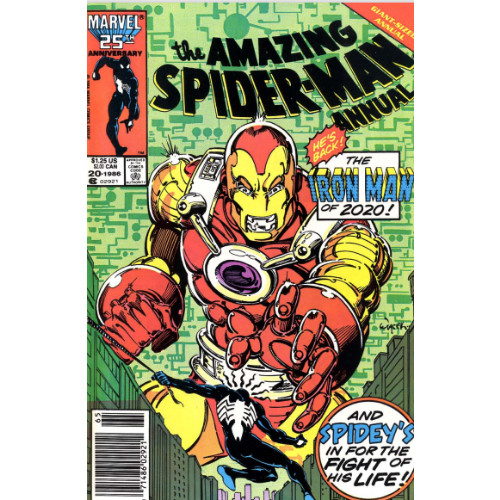 As this issue's splash page welcomes its readers: “Welcome to the year 2015!”

As we know it, 2015 was the year Drake dropped “Hotline Bling,” Mad Max: Fury Road debuted (and would go on to win 6 Oscars), Making a Murderer splashed onto Netflix, and Hamilton first wowed audiences. The Charlie Hedbo attacks happened in Paris, Aaron Hernandez and James Holmes were each sentenced to life in prison, and Leonard Nimoy passed away. Like any year, 2015 had its ups and downs, pop culture moments, wins and losses.

What we didn’t have were flying cars, enhanced cybernetics, and time travel devices.

In a future that probably doesn’t exist anymore because the Marvel Universe is now in 2021, 2015 is a technological paradise, and mega-corporation Stark Industries is run by Arno Stark, cousin-something-removed of the deceased Anthony “Tony” Stark. Like his late relation, Arno pulls double-duty, running the company while also bearing the weight and responsibility of the Iron Man mantle and armor. Unlike his famed relative, Arno does both publicly. I guess he’s had his “I am Iron Man” moment already, years before Tony would do so in the comics and movies.

So maybe we don’t sail the friendly skies on our daily commute, and maybe we can’t look at the world through cyborg eyeballs. Maybe the only Iron Man we got in 2015 was Robert Downey Jr.’s performance in Avengers: Age of Ultron. Regardless, we still have an advantage over Arno--we’re real! And with our real, very human peepers, we can peer into the pages and see how the fictional Iron Man of the future meshes with our old buddy, the modern-day (for 1986) Spider-Man.

“Man of the Year” 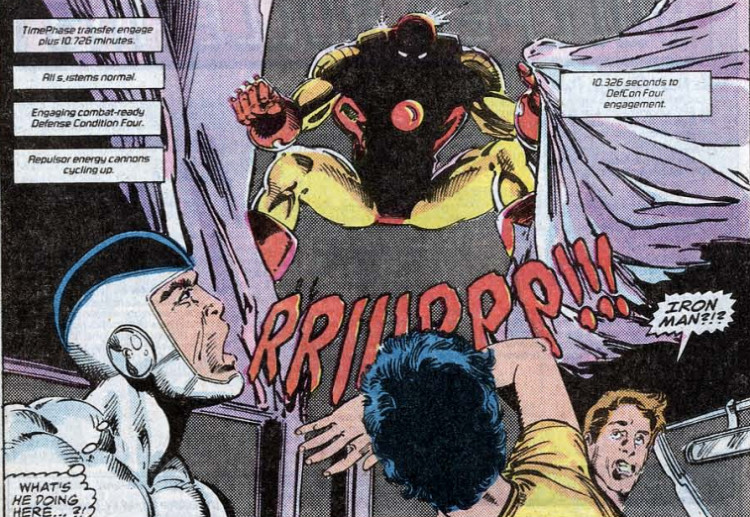 Some slight confusion immediately becomes apparent: though Arno is known as “the Iron Man of 2020” (as billed on the front cover), we first see him in 2015. Part of me was genuinely disappointed by this revelation, as I really wanted to see what a 2020 would have looked like without COVID-19, killer hornets, and tense presidential politics. But whaddaya know? There’s still five years. Maybe killer hornets will still be a thing in that future.

Taking Fred Schiller’s plot, Kevin McDonald runs in a highly entertaining direction as he crafts this potential future world. Details are scarce, but that’s part of what makes the issue so engaging. Maybe reading the original Machine Man issues Arno debuted in would help, but even without that additional knowledge, you quickly learn what’s going on. McDonald does a nice job bringing his readers up to speed, dropping them into a somewhat-realized world that never confuses or jostles. If you’re aware that Arno has replaced Tony, that’s all you pretty much need to know. Our friend Mark Beachum, whose work we've already experienced in a few other annuals, continues to impress here--his future universe isn't necessarily as detailed as, say, Rick Leonardi's vision of 2099, but Beachum does the best he can with crafting this version of 2015. 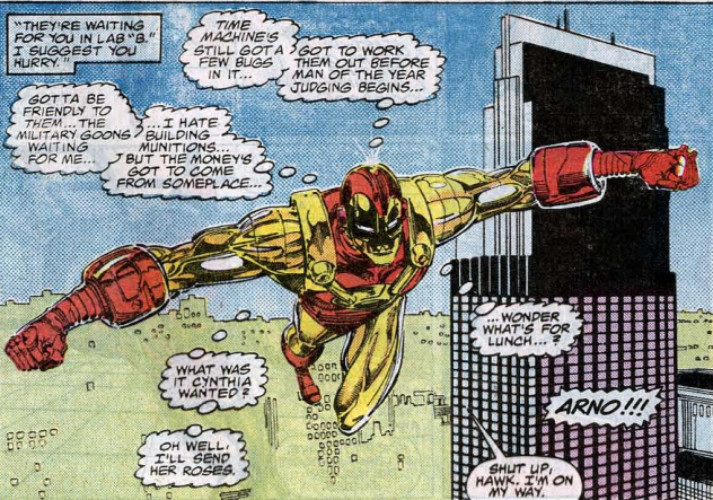 I was impressed at how well McDonald fashioned Arno as a character, particularly as he relates to his predecessor. Arno, as both a man and an Iron Man, seems to have found the best of both worlds: where Tony Stark had to hide Iron Man behind the facade of a corporate bodyguard (who somehow never appeared in the same place as Stark), Arno has no such limitations, showing (or perhaps even flaunting) his freedom as both the public face of a renowned company and a superhero in front of the press, chatting with his wife and an employee as he flies through the air, or ditching an important meeting to rescue people in danger.

Unfortunately, even without the restrictions imposed on Tony, Arno is occasionally a tad too much like the former Armored Avenger. He carries the same devil-may-care attitude and some of the showy arrogance, shrugging off his wife and an associate as he heads off to conduct more important business. He wishes to get out from under Tony’s shadow, but McDonald does little to showcase how different Arno is in terms of personality. I wondered if this was intentional, if McDonald purposefully injected similar traits in Arno to maybe even show a genetic predilection in the Stark family line towards such a disposition; regrettably, McDonald doesn’t focus on this, leaving my conjecture unanswered.

From here, McDonald weaves a Terminator-esque storyline which sees Arno go back in time to find a young child...but unlike the metal man in the Arnie film, Arno Schwarzenegger doesn’t want to kill anyone. Though this eliminates the “If you could go back and kill baby Hitler, would you?” style of philosophical debate often associated with time travel, the plot hones in on a different theme, that of “saving the day” instead of “rewriting the past.” Arno’s looking for a boy, the childhood equivalent of a terrorist from his time, and all he thinks about is preventing (for him) a present day catastrophe instead of altering the past to keep that catastrophe from ever occurring in the first place. I’d love to say that this short-sightedness is intentional on McDonald’s part, and I really hope it is. Arno’s inability to figure out an alternate plan seems in line with his character and makes the tension all the more engaging.

McDonald ends up weaving a genuinely fantastic Iron Man/Spidey conflict, as Web-Head mistakes the future Iron Man for the present day Tony Stark model and misinterprets his intentions for the child, thinking he’s kidnapping the young boy (who, in a stroke of luck and coincidence, is already familiar with Peter Parker). The fight is fun mostly for this conundrum, a classic superhero trope where two characters duke it out while knowing only half the story. I’m sure I could give McDonald a strike for going to the well that others have attended one time too many, but his conflict is enjoyable enough to keep me from complaining about it. The greatest tension derives from Spidey never learning (in this issue, at least) that his opponent is not the real Stark, driving our Web-Head nuts when Shellhead 2015 keeps mum. 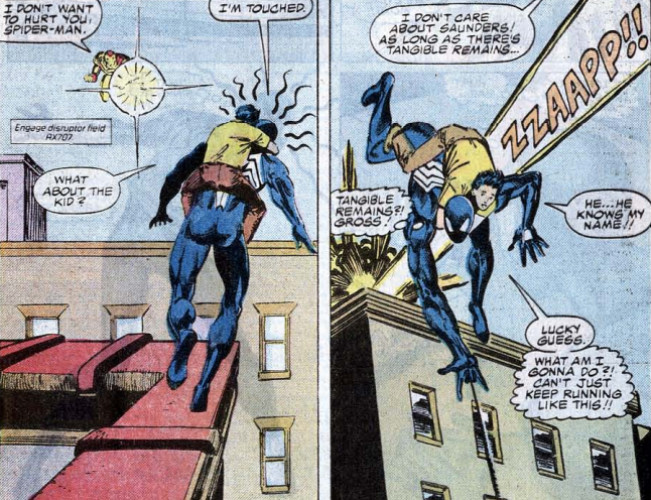 Also wonderful is a sequence where Spidey absolutely cleans Arno’s clock. Beachum is to be praised for his exceptional delivery of the second half of the fight, which sees Spidey go to town on the non-Avenging Armored Avenger. Fists fly as Spidey beats bits of armor off Arno and drives the guy into the ground. A short series of two panels showcases Spidey punching Arno through a brick wall in my favorite moment of the issue. The action is tense and fluid, Beachum’s pencils superbly depicting the mano-a-mano fisticuffs. This is Spidey at his fighting best, and his hopping maddest, and against a guy as strong as Arno, he’s capable of going more than a few rounds.

That Spidey never discovers Arno is not the modern day Iron Man presents a bit of a twisted ending. This isn’t an issue where the heroes realize how wrong they were about the other person and put aside their differences, uniting against evil and saving the day. No, this issue ends with the conflict not really resolved between the two men, with Arno fleeing this particular time in defeat and Spidey left confused and rather nonplussed. The ending, I’ll admit, is a downer, but it works so well in the context of the issue. Sure, it requires a bit of coincidence to get there--that good old trope of heroes never explaining themselves fully during a fight--but it ends on such a poignant note that I can forgive that little slip. 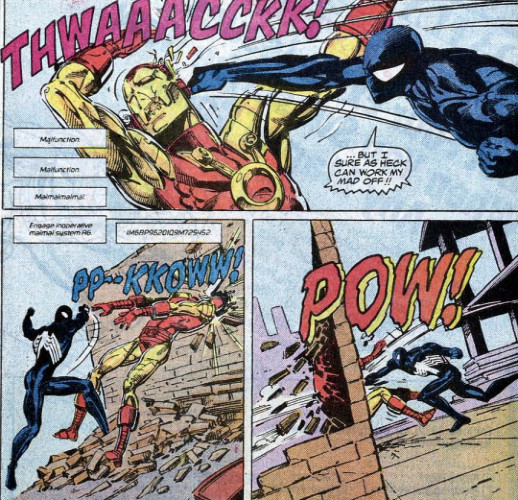 Arno, in the running for the “Man of the Year” award, proves himself not wholly appropriate to be the recipient...and not exactly the guy his predecessor was, save for a bizarre similarity or two. “Mr. 2015” here represents an interesting character from an interesting world, one given enough distinctive detail to distinguish it from the modern Marvel timeline without going overboard. Several annuals of late have seemed perhaps a bit simplistic, showcasing smaller stories with smaller characters and smaller stakes. It’s fun watching writers and artists ramp it up a bit for this standalone narrative; even if some of the characterization is wonky, there’s enough to appreciate in Amazing Spider-Man Annual #20 to put it cleanly above some of the other recent stories we’ve analyzed