Frank Miller returns to Daredevil to craft one of the most riveting, character-defining arcs of the Man Without Fear's career

The guy’s one of those names you associate with 80s comics. He’s up there with Alan Moore, Chris Claremont, Alan Moore, John Byrne, and that one guy who wrote Watchmen. And though his star has fallen in more recent years--or, perhaps to some, cascaded from the heavens like a burning hunk of kryptonite--the man had his day, for sure. He paired with Claremont on Wolverine’s first ever solo series, introduced the world to Old Batman, and also did a fine job on Young Batman too.

And then there’s Daredevil.

I’ve written a few posts on Miller’s Daredevil run, and though I had a couple qualms, I still consider it some of the finest stuff from the 80s, specifically when you consider its breadth. Miller brought monumental changes to the Daredevil mythos--he cemented Bullseye as a fiendish arch-foe, introduced (and then killed off and resurrected) deadly assassin Elektra, and perhaps most significant of all (yes, even more significant than Elektra) transferred Wilson Fisk over from Spider-Man comics into DD’s world. Fisk’s entry into Hell’s Kitchen is, perhaps, my favorite story arc of Miller’s from his regular run on Daredevil.

I’ve discussed, briefly, Miller’s “Born Again” story arc, which he returned to the title to pen (eh, more like given it a couple shout-outs here and there). I always intended on re-reading the story (since I gave it an initial read-through a little over a year ago) and discussing it here at length. After purchasing a volume collecting the arc, I’m happy to finally weigh in on what many consider the greatest Daredevil story of all time. 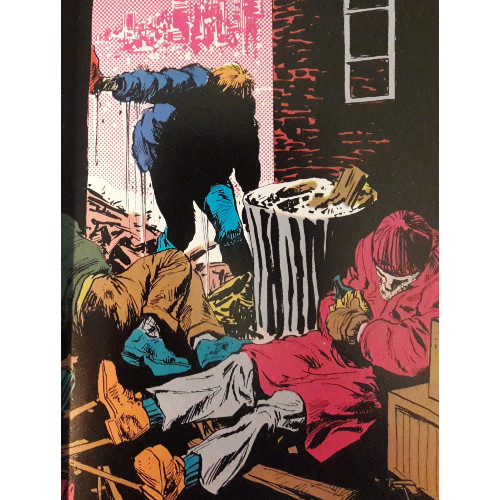 It’s funny having read "Batman: Year One" a few months before this arc. Published about a year after “Born Again,” "Year One" represents, in my mind, a whole different side of artist David Mazzucchelli. A lot of the content is certainly similar--gang warfare, street-level fisticuffs--but his style feels so dang different in both. Perhaps it’s part of the editing process in compiling these issues, but Mazzucchelli’s work on "Year One," though fantastic, feels...smaller? Like, his characters feel proportionally smaller, panels feel smaller, closer together. “Born Again” feels like Mazzucchelli has more room to breathe, play with the space he’s working in. Panels are bigger, more bombastic, still moments are riven with color, action, fluid movement. I recently reviewed a few stories Mazzucchelli illustrated during Denny O'Neil's Daredevil run (the last issue of which immediately precedes the first chapter of "Born Again"), and it's easily the best aspect of O'Neil's time on the book. I genuinely appreciate Mazzucchelli's art in both, but it's on Daredevil where he's truly on top of his game.

Miller’s return to “Daredevil” is engrossing, especially as he packs in a titanic story that seemingly comes outta nowhere. No allusions in prior issues I’ve read, nothing to build up to this narrative. "Born Again" is so famed and so discussed amongst comics fans, you’d almost expect it to come packaged with fanfare or some kind of bold announcement. I don’t know if the original issues crowed “Frank Miller Returns!” or anything on the covers or inside, anything to entice readers towards Miller's plans. Yet, for all the pretense it could carry, the story arrives...muted. It just sneaks up behind you and slaps you upside the head. Boom, you’ve got Karen Page, former secretary turned druggie actress, selling her soul for a high. And by “soul,” I mean “Matt Murdock’s secret identity.” Like, where is this coming from? It’s so sudden, so unexpected. Even if you’re aware of the story, its beginning is so inauspicious that it’s hard to believe what’s going on.

In a good way, though. It’s all very good. Karen’s betrayal, though unexpected and surprisingly quiet, kicks off a fantastic story. Miller takes his time wonderfully, carrying you through the following days and weeks as Karen’s loose-lipped barter royally messes up Matt Murdock’s life. So much beautiful interplay exists between scenes and ideas. As Karen questions her life decisions and works through the hell her days have become, so does Matt find himself in a heretofore unexplored level of his own personal Dante’s Inferno. Miller seems to enjoy tormenting our good friend Matt Murdock via his comic’s corpulent corrupter, that dastardly devil Wilson Fisk. You’re dragged along through the fire as, piece by piece, Matt’s life is torn to ribbons.

Amazingly, such a process makes for riveting reading. You’d think, after a certain amount of time, you’d get bored with tracking through sludge. Yet Millar makes Matt’s descent fascinating, particularly in the way it expands and engulfs others. As Matt becomes unraveled and loses himself in his pain, characters like Foggy Nelson, Glorianna O’Breen, and Phil Urich suffer consequences simply because of their association with Matt. Miller’s ability to form his play around Matt’s cast is as remarkable as it was during his earlier tenure on the title. He utilizes characters well, creating conflict and tension around all of them. Some of the arc’s best scenes include Phil rescuing his wife from certain death, Matt saving Karen Page from some shady thugs, and Glorianna coolly snapping photos of prison cell murders. This isn’t just Matt’s story, Miller promises. The fallout affects and alters everyone involved. 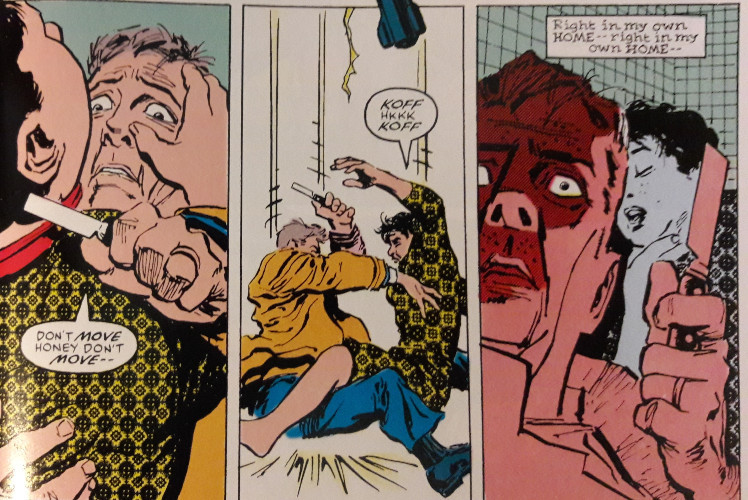 But where would we be without our cool-headed Kingpin to forge a path into the heart of the macabre? Fisk is as frightening as Miller ever made him in his original stories and nearly as imposing as Bill Sienziewicz illustrated him in his and Miller's Daredevil: Love and Death graphic novel. Here, Miller has the big man toe the line between Machiavellian manipulator and enraged criminal. This is the guy who beats Matt bloody and then tries drowning him in a crashed car. He methodically disables Matt’s life in a flurry of excessive moves yet also breaks the neck of a disgruntled associate. Calm under pressure, Fisk nevertheless exerts his weight, physically and politically. His reach has never been longer, his influence never freakier, his ability to bend the rules and work within legal systems never more intense or intricate...and his fall never more desired. If Miller’s previous stories hadn’t convinced you of Kingpin’s status as a tip-top Daredevil foe, this story will reassure you. Heck, it may convince you that Kingpin, at this time, was one of the prime criminals in the Marvel Universe. He’s freakishly scary.

Villains dismantling heroes’ lives isn’t anything new, not by our standard. Iron Man 3 saw the “Mandarin” pick apart Tony’s life and blow up his house; Knightfall had Bane wear Batman down before finally snapping the vigilante over his knee. Amazingly, however, the “Daredevil vs. Kingpin” angle isn’t what Miller constructs his primary tension or conflict on. For much of the book, Matt is more concerned with living than in getting even, especially after his one assault on the Kingpin’s compound goes horribly awry. This isn’t Tony Stark giving the Mandarin his address in a bold-faced game of “chicken.” You don’t feel the same sense of justice or “righteous indignation justified” when Azrael thwomps Bane over the previously broken Bat. “Good guys vs. bad guys” just ain’t the heart of the tale. 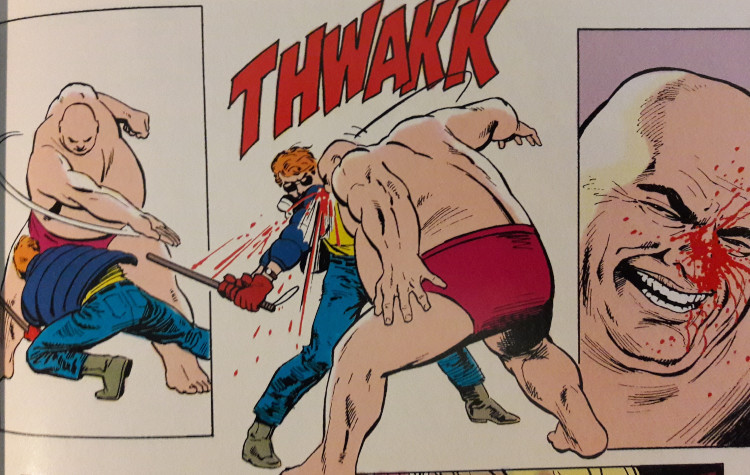 Daredevil is whooped. Soundly. And his single attempt at vengeance is also pounded into oblivion. From there on, Miller crafts an incredibly character-driven story about one man’s struggle to work himself back from the grave of ashes he’s been buried in. J.M. DeMatteis’ “Kraven’s Last Hunt” works similarly, with Spider-Man clawing himself from a literal grave. Imagine that but without Spidey’s climactic confrontation with Kraven. Imagine Spidey digging himself out and just going home, striving to rebuild the shattered pieces of a dismantled life thrown into chaos after his fortnight-long internment. This is how Miller creates his story, letting a beaten, bruised Matt Murdock discover the strength to pull those shattered pieces together.

And so much of the same happens for others as well. As Matt’s story collides with Karen, she begins her own healing process. I can’t quite say Miller makes “Born Again” as much a Karen Page story as he makes it a Matt Murdock narrative; he nevertheless applies the title’s principles to her as well and continues crafting parallels between her and Matt, as I alluded to previously. We see Karen’s lowest moment, her darkest deal made, her body and soul sold. And yet, through the misery, she struggles to reclaim a semblance of humanity, to seek forgiveness, of all things, from the man she callously betrayed. 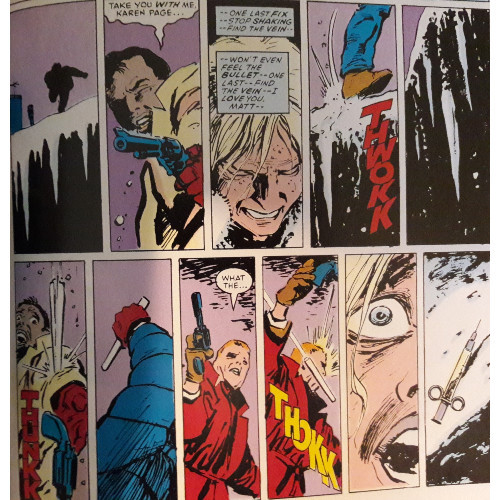 Ben Urich, already a victim of the Kingpin’s machinations (Elektra once threatened his life in a theater and later stabbed him with her sai), faces an even more pronounced persecution at the madman’s hands. Urich’s story is Miller’s best example, other than Karen, at how well Kingpin has wormed his way into the upper echelons and lowest dregs of society, manipulating the poor reporter at every turn. Heck, even Foggy is involved, though his inclusion is a bit more discrete; Miller hints that he enters the Kingpin’s employe unknowingly through a shell corporation run by the big man. Miller is never direct about this, brilliantly weaving in hints for the reader to discover.

The only place where Miller’s narrative flags (which is a bit of a pun, as you’ll see) somewhat is in his final few chapters, specifically regarding the introduction of Nuke. As a character, Nuke is cool, he’s really nifty. A drug-addled soldier-of-fortune recruited by the Kingpin, this Vietnam vet sees war wherever he looks and is always willing to drop some bodies for the ‘Murican cause. Scenes where he wages urban warfare in Hell’s Kitchen, confronted by Daredevil, are bombastically action-packed. Yet Nuke’s story is taken a little too far into the tale’s final chapter as Captain America pokes into his background. Is he a cool character? Yes, and I’m thankful Miller didn’t go down the obvious “Let’s bring in Bullseye” route when looking for a nasty assassin. For all Nuke’s neat characterization, however, the inclusion of Captain America to finish a subplot Miller just introduced around Nuke feels a little meander-y when compared to the rest of the plot. 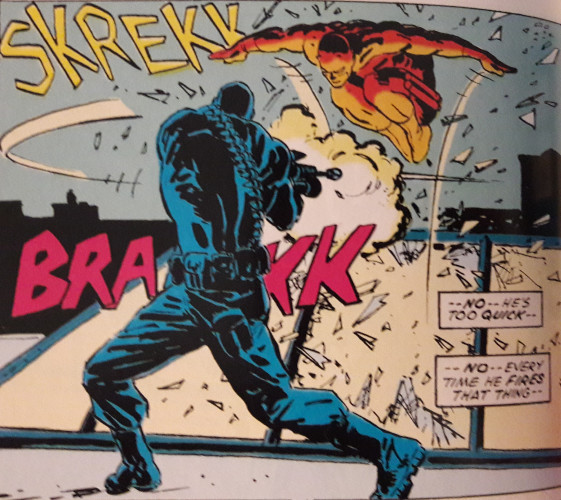 Fortunately, this whacko, politically-charged killer doesn’t, uh, nuke the rest of Miller’s plot. Aside from a weak-ish ending, “Born Again” is absolutely a seminal Daredevil arc. Matt faces the darkest demons of his career and walks away; maybe, at times, it feels a little more like a hobble considering his physical bruises and societal beatdown, but these only make his triumphant ascent up the mountain that much sweeter. A pyrrhic victory, to be sure, but Miller grants us a vision of a man with the strength of character and emotional resolve to push through his personal demons and the devils others inflict upon him.