This final volume collects several engaging issues...but you should really stay for the wondrous graphic novel included as well 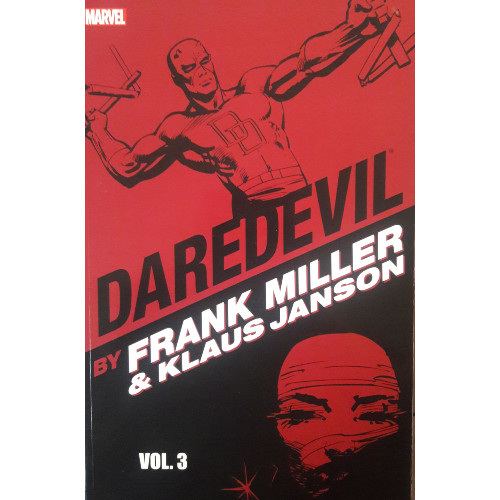 In our examination of Frank Miller’s run on Daredevil, we’ve looked at two paperback volumes that collect, relatively, the first two-thirds of Miller’s lauded narratives. Miller has introduced the deadly Elektra, killed her off, and resurrected her; Bullseye has gone from another unstable supervillain to Daredevil’s arch-enemy; the Kingpin and his wife Vanessa had been given story arcs on their own as the big man has transitioned from Spider-Man foe to Daredevil Enemy Number Two; Ben Urich, intrepid reporter, has stood as a bastion of truth in the world of hard-n-fast journalism, dumping a story that could have ruined Matt Murdock’s life and finding himself in one or two perilous situations; the Punisher has taken his first crack at Daredevil, opening a new rivalry reminiscent of his other colorfully costumed sparring partner, Spider-Man.

Miller’s run winds down in this third volume, which collects not only his last issues of Daredevil but also a few other tales: a single What If-? issue, a standalone story Miller returned to Daredevil to write (not “Born Again,” which is sorely missing from these collections), and the graphic novel Daredevil: Love and War, which he wrote alongside illustrator Bill Sienkiewicz. 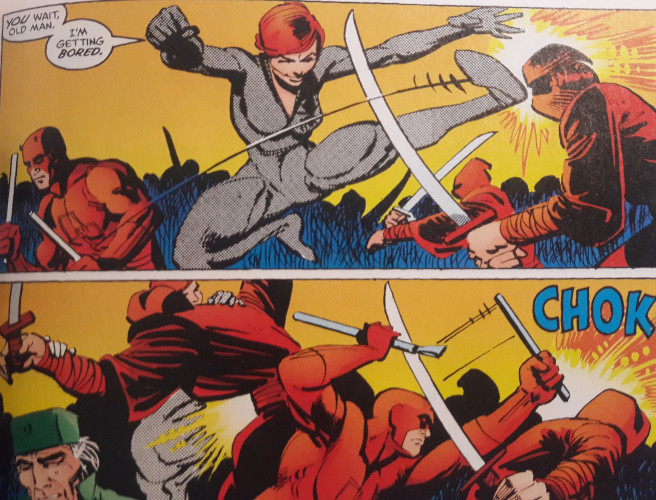 Up until now, Miller’s pace has been frenetic, large story building upon large story. If it wasn’t the Kingpin’s return to crime, it was Bullseye’s growing hatred towards Daredevil, or the introduction of Elektra, or the untimely demise of that same assassin. Lots of big things happening, lots of tight characterization.

Yet, in this third volume, we see Miller move into slightly smaller stories. We’ve already seen how Miller is capable of standalone arcs or single issue tales--look no further than the Miller-illustrated (Millustrated? Millerstrated? Come on, people, let’s make this a thing) retelling of Daredevil’s origin or the two-part Punisher arc for some prime examples of how the writer/artist worked on a smaller scale. Yet Miller seems to have reached, to me at least, the zenith of his creativity with the death of Elektra. He’s done what he wanted to do, told the prime story he wanted to create. Now, he can take a breath and move onto tinier tales, play with the title a little.

There’s a “joy,” if you will, in these tales not found much elsewhere in Miller’s run. I add quotation marks to “joy,” not out of sarcasm, but out of tentativeness. If you look elsewhere at Miller’s time on Daredevil, you discover, here and there, little bits of fun. Miller’s favorite whipping boy, Turk, takes the brunt of Miller’s more jovial nature, as visual gimmick after visual gimmick sees the thug practically tormented by DD. It’s funny in a genuine way, not just a case of brief comedic timing or a moment of slapstick. Miller carries the amusing theme throughout his story arcs, providing those hints of amiability. Turk still eats crow in this volume but in more elaborate ways. In one issue, he convinces the Kingpin that Foggy Nelson, of all people, is an accomplished killer, proving the character is just as dim-witted as he is punchable. In another, Turk attempts to become the Kingpin’s newest mercenary after he takes on the Stilt Man armor; it’s his moment to shine, dang it, and after all that crap he’s gone through, after all he’s suffered at Daredevil’s hands, he’s gonna become somebody! 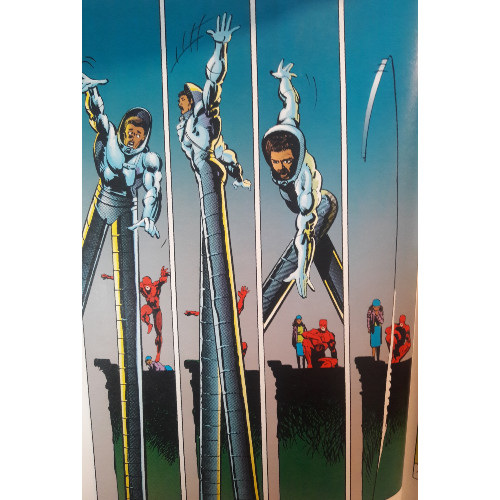 Miller really lets the reader enjoy the title, for a completely different reason than you may have enjoyed his previous stories. Miller’s tales, tinged with darkness, have always traipsed distinctly in a world of serious overtones and deeper understanding. Gangsters run amok, assassins duke it out over rooftops, vigilantes prowl the shadowed corners of Hell’s Kitchen. Yet, for a good chunk of this volume, that darkness is left to wander on its own, not allowed to completely mingle or tamper with the smaller, offbeat narratives Miller keeps injecting into the series.

Things certainly become more serious as Miller’s time on the book ends, with the creator wrapping up some unresolved plotlines involving Elektra, the Hand/Chaste conflict, and Bullseye. I’ve said my piece regarding Miller’s handling of the ninja/mystic elements in Daredevil, and my primary gripe continues here. Even as Miller attempts to immerse readers in a world where Daredevil’s life and fate are tethered to a war between two rival factions of karate killers, I still approached the plot with little interest. As much as these elements have shaped Daredevil’s history, I still believe Miller works best when he focuses on the grittier noir aspects. That’s why a story like his final issue--a eerie confrontation between an angry DD and a bedridden Bullseye--works better than whole arcs of Daredevil and Stick fighting off evil Hand acolytes. Miller’s final issue works because it tethers nicely to the themes he’s already woven throughout the rest of the book and serves as a nice “final say” on the DD/Bullseye conflict.

Additionally, this volume contains three other stories, which I alluded to above. I’ll be 100% honest and admit I skipped the What If-? issue...not out of boredom, though. I simply own volumes which contain other What If-? issues and would rather read the Daredevil issue alongside the rest of the original series. Therefore, I’m unable to attest to its quality.

The standalone Daredevil issue Miller writes, with John Buscema providing the artwork, is a genuinely bizarre issue that sees Daredevil (in a civilian guise but not going by Matt Murdock) visiting a small, seedy little town in New Jersey called Broken Cross. The issue explores Broken Cross’ dark underbelly, exposing grim secrets it so clearly tries to hide on the surface. Miller draws the reader in nicely, revealing the town’s story piece by piece as Matt works to help it in some fashion. I couldn’t say whether this standalone issue was teased in an issue before it, but the story is certainly an odd one in Miller’s bibliography. It reads utterly different from anything else he wrote on the title; I’ll allow you to judge for yourself whether that’s a complaint or not. 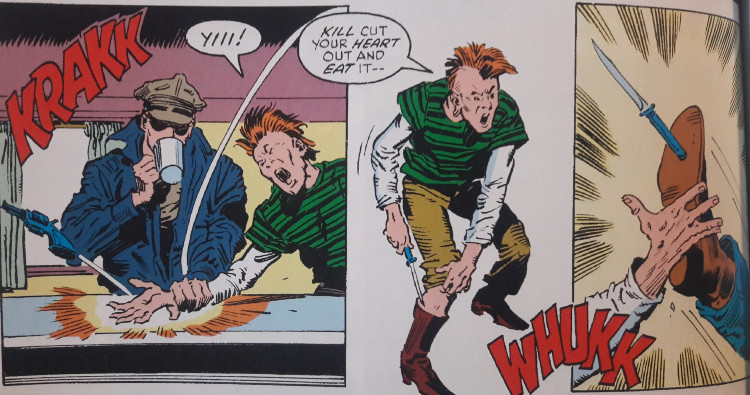 The highlight of the volume is a second standalone story Miller wrote, with Bill Sienkiewicz on art duties. Daredevil: Love and War is a gripping, almost frightening story that sees Miller at his writing best. Miller juggles several characters at once--Daredevil, the Kingpin, the Kingpin’s doctor, the Kingpin’s doctor’s wife, and the Kingpin’s doctor’s wife’s kidnapper (they all have names, don’t worry)--creating a fast-paced story that bounces from perspective to perspective. Miller crafts a surreal, dark story surrounding the wife’s kidnapper; his internal monologue is a fascinating read as Miller weaves in repetitive phrases and thoughts to help the audience enter his mind. As integral as Daredevil becomes to the plot, Miller’s focus on these secondary characters, most of whom were invented just for this standalone issue, gives the story its dramatic punch. You sympathize with the wife’s plight, mentally wrestle with her kidnapper, worry alongside the doctor.

Sienkiewicz’s art adds a secondary level of trippiness to the story; his work has a painted quality to it, quite different from his depiction of Dracula in Uncanny X-Men or even his two-part Cloak and Dagger story in New Mutants. Sienkiewicz embraces a startling, disproportionate style for his illustrations--his towering Kingpin, in particular, reminds me of the hunchbacked version of the character from Into the Spider-Verse--which feels off-putting, but in a “trying to wrap my head around what’s going on” way instead of making one uncomfortable. You’re forced to examine the panels, soak in the details Sienkiewicz provides. This is especially true of his backgrounds, often shaded with muted colors but providing exquisite detail to keep the reader engaged. Miller’s words and narrative, combined with Sienkiwicz’s work, make Love and War a unique reading experience. For anyone checking out Miller’s other stories, particularly his stuff with Daredevil, this is a story I highly suggest exploring. 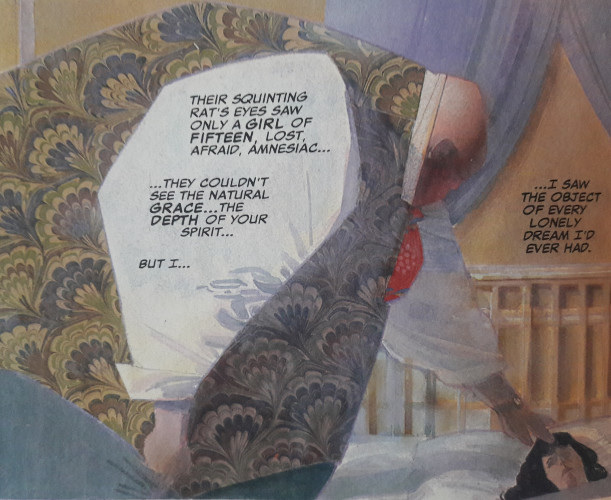 Thus, Miller’s run comes to an end. His time with our crimson comrade has seen its highs and lows (still not convinced about the whole “ninja” plotline), but Miller’s heights far outstrip the valleys. Under Miller, Daredevil became a household name for comics fans and, as later runs by creators such as Brian Michael Bendis, Ed Brubaker, and Mark Waid can attest, has influenced the character and his world for the last four decades or so. Fans owe Miller a debt of gratitude for introducing new characters and ideas which have shaped the lawyer-vigilante in ways Miller (or Matt Murdock) may not have been able to see. His stamp upon the title is indelible, and though the creator’s quality with more recent stories has been contested, that should do little to mar the excellent work he produced with Marvel in these 80s epics.