Dennis O'Neil's time on Daredevil is shaky at best, especially as this volume serves up a bizarre cross-section of content 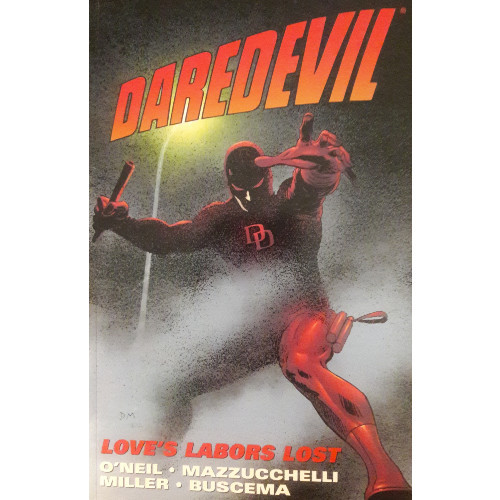 A while ago, I published three posts covering Frank Miller’s run on Daredevil, discussing his noir take on the character, his introduction of Bullseye and Elektra, and his capable usage of the Kingpin and Punisher. Read together, Miller’s run is a solid, action-packed examination of the Man Without Fear; as a few future posts will attest, he wasn’t quite done with the horn-headed hero.

In between Miller’s last issue and his seminal “Born Again” story arc, writer Dennis O’Neil wrote a handful of issues. Since his last issue on the character (Daredevil #226) ended right before Miller’s “Born Again,” I thought it’d be fun to pick up a volume that collects O’Neil’s run and see what the famed Batman/Green Lantern scribe crafted during his brief tenure on Daredevil.

Sad to say, it wasn’t quite as amusing as I imagined. 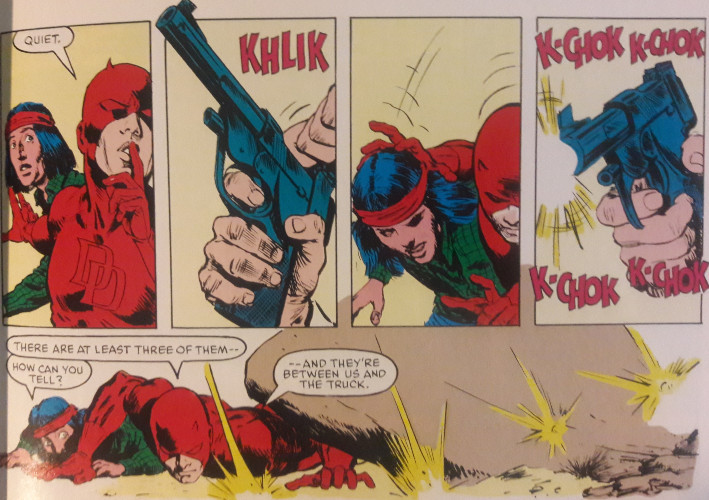 Two important notes to make, as we begin:

First, yes, you noticed correctly that Frank Miller’s name is in the writing credits even though I stressed Dennis O’Neil’s involvement. Miller would return to DD's world prior to “Born Again” to script a single issue story, “Badlands,” which I discussed in my third post on Miller’s collected run but is also collected in this volume. Feel free to read about that issue in a bit more depth there. As I already gave my opinion on the piece, and since I do want to focus on the O’Neil elements more thoroughly, I’d rather decline to reference it much here.

Second, this volume really does O’Neil dirty. If Wikipedia is to be trusted, O’Neil wrote, in additional to the issues collected in this volume, Daredevil #194-202, #204-207, #210-214, and #223-224. That’s 20 extra issues not printed here. From the brief research I conducted, this volume skips out on stories dealing with a villain named Micah Synn--a seemingly engaging running plot O’Neil introduced-- a Secret Wars II tie-in where the Beyonder temporarily renews Matt’s sight, and an issue that features a brief appearance by a drunk-as-a-skunk Tony Stark during his less-than-halcyon days. Who’s to say if any of these stories are any good, from a purely subjective perspective, but the missing material explains a lot.

First, it offers insight into why this volume feels…”jumbled” is the best word. By this time, O’Neil had wrapped up the Micah Synn plot, yet he refers to it liberally in the stories presented here. Both Matt and law partner Foggy Nelson’s lives have been affected by Micah’s machinations, but all we’re left with here are fragmented shadows of that plot’s aftermath. Perhaps it isn’t fair of me to comment upon a marketing/editing decision or whoever selects which issues appear in which volumes, but from the start, this trade feels a little off.

Second, it showcases the little reasoning which seems to have gone into selecting which stories appeared in this volume. Much of the material presented here feels like one-offs, stories which O’Neil scripted, one piece at a time. A couple of overarching strands exist, which I’ll touch on in a moment, but the connective tissue is loose, dangly. We open with a bizarre issue where Matt Murdock travels to Arizona after suffering a dream about the old Western hero Two-Gun Kid (who, surprise, happened to be a lawyer in his non-gunslinger guise) and faces against the descendant of a TGK adversary. Another single issue plot sees DD go up against Spidey adversary the Vulture, with the old coot proving a surprising match for Horn-Head. The issue immediately following features a Daredevil/Gladiator rematch, which smacks of some familiar tropes I’ve recently read in a few other skirmishes between those two old foes. O’Neil’s plots are all over the place--a little of the Wild West, mixed with the later appearance of a European cult, saddled next to an espionage thriller involving a chemical weapon. 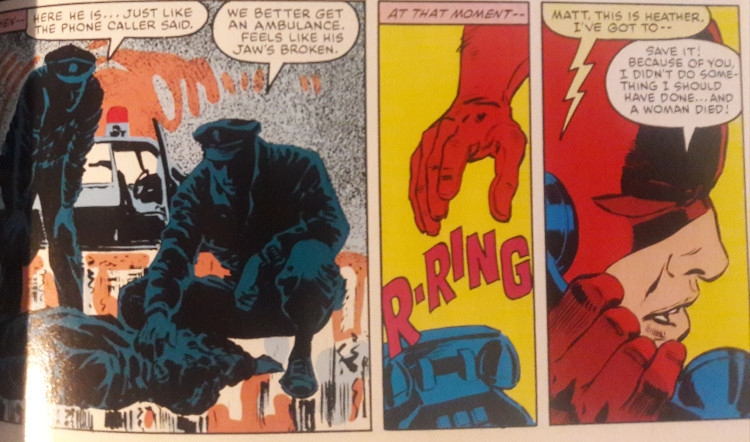 If you’re looking for some kind of narrative throughline, little exists here. The volume’s largest thematic element comes in the form of Heather Glenn, Matt’s old flame who re-enters his life...and then exits startlingly quickly. Her story provides some momentarily engaging internal strife for Matt to cope with; O’Neil’s best issue juxtaposes her story with a fog that’s recently rolled into New York. Here, the writer introduces a visually fascinating issue that plays with a central concept as it juggles the Matt/Heather story with the bizarre weather, a tale enhanced in fact by a well-framed comparison to Miller’s previous work.

Speaking of his predecessor, O’Neil seems hesitant to outright reference Miller’s stories. He doesn’t necessarily seem like he’s distancing himself from what Miller did--though no ninjas or resurrected assassins appear in these stories, O’Neil keeps the grounded, gritty approach Miller wove into the title. The writer, however, provides little fanfare or recognition of Miller’s recent run. Turk, Miller’s bumbling yet lovable thug, appears briefly yet isn’t even named. O’Neil’s use of Black Widow feels less connected to her brief appearance in Miller’s run and more of a nod to older stories where she and Matt were a couple. If anything, O’Neil’s handling of Heather’s arc seems in line with Miller’s vision, so far as her tale represents the further dissolution of her relationship with Matt. O’Neil, actually, seems to want to push the envelope further in this instance, perhaps attempting to one-up the famed scriptor. 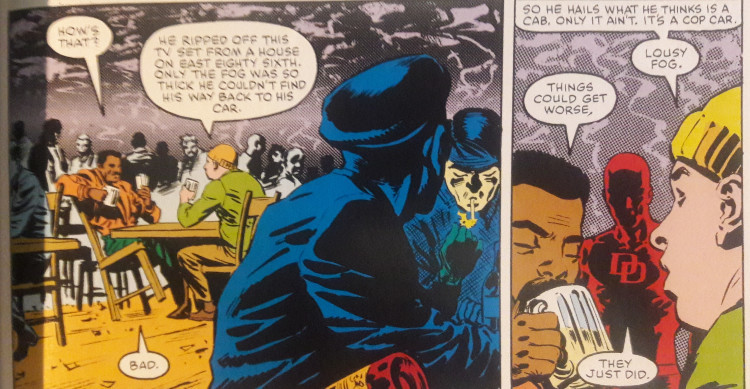 Funnily enough, it’s when O’Neil takes some previously-introduced concepts and toys with them that he gets his best material, rather than playing with his own toys. The Vulture and Gladiator stories may be simple standalone issues, but O’Neil messes with both characters. Adrian Toomes, that old coot, is portrayed as something akin to an actual vulture in the way he temporarily becomes a grave robber. “That’s what vultures do!” he shrieks at DD as the vigilante attempts to keep Toomes from un-tomb-ing a corpse; it’s perhaps one of the more surprisingly insightful looks into the Vulture’s psyche I’ve read in a comic, with O’Neil wonderfully letting the villain embrace his costumed schtick as a genuine aspect to his identity.

Gladiator, ditching his typical costume with the wrist-mounted razor blades, opts for the more traditional, Roman-style gladiator outfit in a move that kind of makes sense. Still, even here, O’Neil is going for something more aligned with a regular Gladiator/Daredevil slugfest--Melvin Potter’s alter ego has, often, been portrayed as a manifestation of his mental illness rather than genuinely villainous urges. O’Neil keeps that concept strong, churning out a unique look but giving little explanation as to why such a change should be significant. 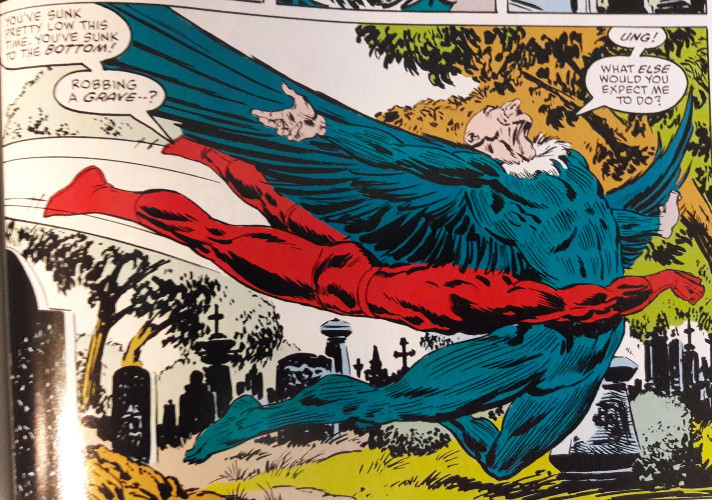 Praise should be given to David Mazzuchelli for his performance on this volume. His art is, in my mind, the best part about reading these stories. He adds such beautiful grace to his characters and imbues them each with exquisite detail, from the splash page featuring a hunched Vulture to a grim visual that will break both your and Matt Murdock’s heart. He performs the bulk of the storytelling in conveying O’Neil’s vision, even if that vision can be a little jumbled. He will be back, I promise you. 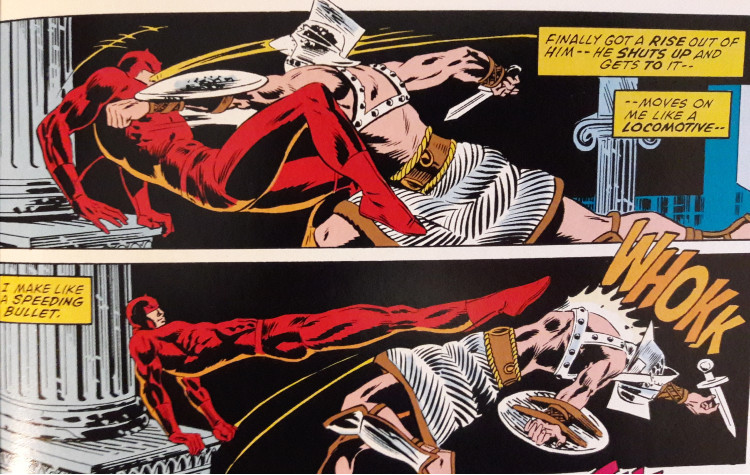 Much like if Daredevil didn’t have his enhanced senses, O’Neil stumbles around the dark a little bit. And who can blame him? He’s picking up after Frank Miller, a man who bookends this run with some of the best Daredevil stories ever produced. O’Neil works as well as he can, pulling in some genuinely compelling concepts and characters yet finding himself stymied by too much disparity between stories and not enough coherency between arcs. It’s also a little disappointing when you consider what this volume leaves out, a plethora of O’Neil issues which may have strengthened the narratives we have on hand. Maybe, someday, an Epic Collection will fully lay out O’Neil’s entire run. For now, we’ve read up to the issue preceding what many consider the greatest Daredevil arc of all time: “Born Again.” I’ll be happy to re-read this arc and see if it's as good as fans have considered it.