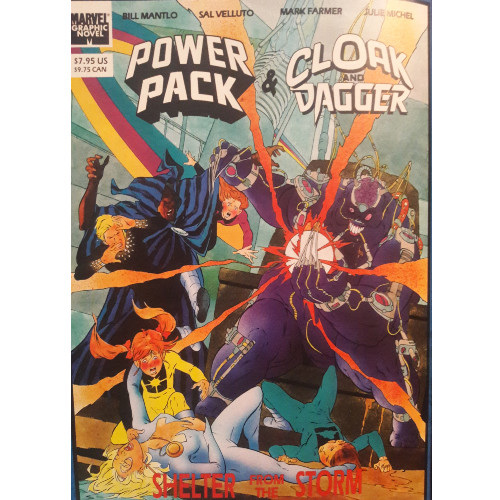 If you’ve read any of my prior blogs on Cloak and Dagger, you’ll recall that their main shtick is hunting down drug dealers, usually those who peddle to adolescents and runaways. They swoop in (literally, in Cloak’s case) and either deal a dose of darkness or liberate with lashes of light. Over the years, they’ve fought demons, madmen, an insane priest, Dagger’s kooky father, and a bunch of guys with guns. They’ve been busy, in other words.

For most of the time, Bill Mantlo handled their stories. He originally created the pair in Spectacular Spider-Man #64 and wrote their initial limited series, their second monthly title, part of their shared Strange Tales series, and a graphic novel. Taking a break from the duo, Mantlo handed over the reins to writer Terry Austin, who picked up threads where Mantlo left off and ran with the characters in a direction that blended his own original ideas with nods to Mantlo’s stories.

In the late 80s, Mantlo returned to his creations, sculpting a second graphic novel for Marvel’s more upscale line of volumes called, creatively, “Marvel Graphic Novel.” You may also remember we’ve taken a glance at a few of these, and though the line started off strong with entries such as Jim Starlin’s “The Death of Captain Marvel” and Chris Claremont’s “God Loves, Man Kills” (heck, I’ll even throw Claremont’s New Mutant-focused “Renewal” in there), it dwindled a bit in quality. “Predator and Prey” is fine and all, but it feels oddly inserted into Cloak and Dagger’s bibliography and features some uneven characterization.

Does Mantlo bring the line back to prominence with this latest addition? And can he undo some of the unbalanced work he provided in his last graphic novel?

“Power Pack & Cloak and Dagger: Shelter from the Storm” 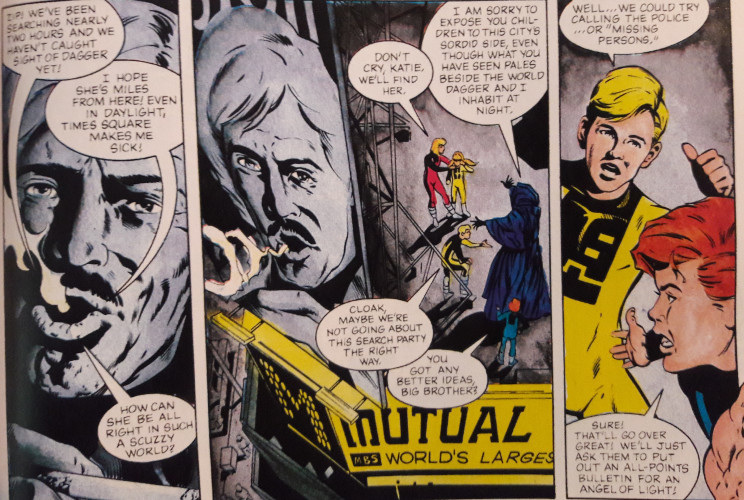 (Then again, kids in the Marvel Universe are readily subjugated to insanity. Poor Franklin Richards was once dragged to Hell, the Runaways learned their parents were actually supervillains, and let’s not forget that several superheroes started off as teens whose backstories typically included some sort of tragic occurrence) 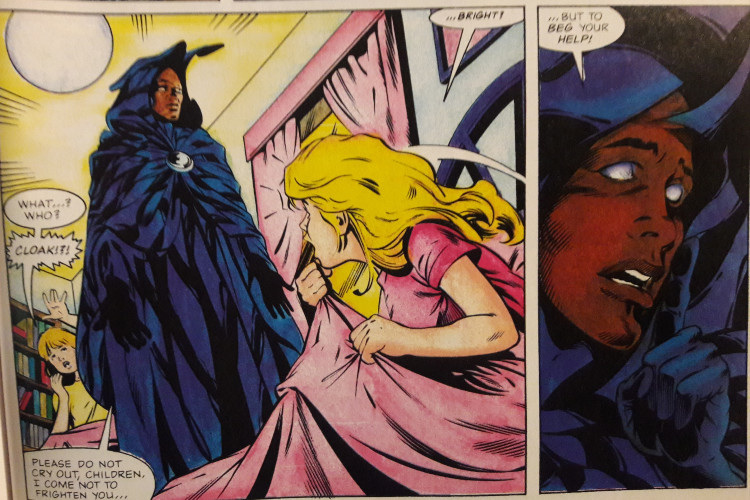 Mantlo, like Austin, doesn’t seem all too bothered when deciding to incorporate youthful heroes into a grim situation. Through the eyes of Cloak and Dagger, we’ve commonly seen the grimmer aspects of New York, as criminals prey upon runaways, enticing them with shelter and the allure of drugs. Cloak and Dagger, if you’ll remember, went to such great lengths to smash the drug trade, they traveled to the other end of the globe. Despite their relative youthfulness, the vigilantes are rather worldly, victims of a twisted underworld who strike back at predators, trying to keep them from feeding upon the hopes and dreams of other runaways and kids. They've aged faster in mind and spirit than their youthful appearance would convey.

By including Power Pack, Mantlo plays with this notion, allowing him to peer at the world with fresh eyes. Gotten used to Cloak and Dagger popping out of the shadows, hurling darkness and light at gang members and muggers? Have no fear, here are a couple of kids, running in with the same kind of heroic exuberance yet discovering things aren’t as fun as they might have imagined. I don’t know if “innocence lost” was a theme woven through the original Power Pack series, but Mantlo at least points to it as a possible mechanism for growth on the part of the Power kids. The four siblings, who leave home to aid Cloak, soon find themselves in a world of darkness and filth. Mantlo doesn’t elaborate on how the kids are potentially altered by their experience, but he directs us toward the notion that the kids are seeing the dregs of the outside world for perhaps the first time, reacting accordingly. 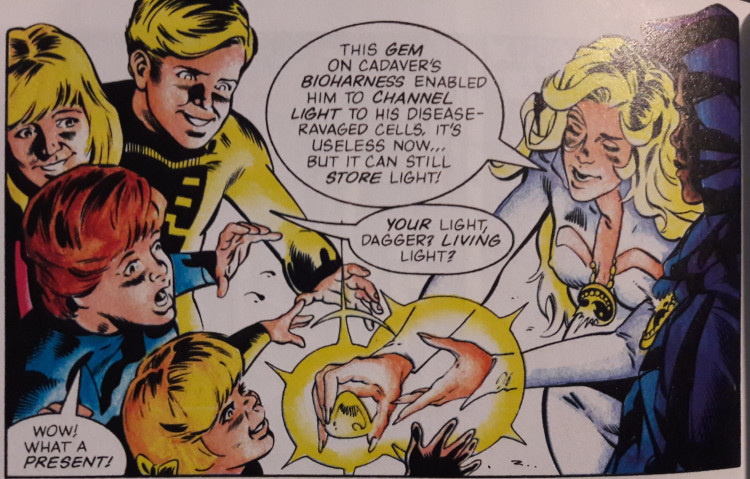 The bulk of Mantlo’s characterization is shuffled away from Cloak and Dagger and filtered through the eyes of two runaway characters, a young Hispanic boy and a young white woman he meets on the bus. Mantlo makes some of the parallels between these kids and Cloak and Dagger somewhat subtle--like Dagger, the young woman has trouble with her parents and seeks to get away from their influence; like Cloak, the young man comes from an ethnic minority background and seeks to protect his new friend when they land in trouble. Some of the characterization feels a tad forced at moments, particularly at the story’s beginning. Mantlo’s Dagger stand-in argues with her obnoxiously protective parents, who use cliched phrases that anyone who’s watched a dysfunctional family in a Disney film should be familiar with. Their communication is stilted, the audience is force-fed their belligerent attitude just to give their daughter a chance to run away. The boy’s situation is better handled, or as well as one can handle the violent influence of a drunk father. His reasons for fleeing feel more natural and less selfish; he’s in genuine danger when his dad’s around, not just throwing a temper tantrum over perceived overprotectiveness. 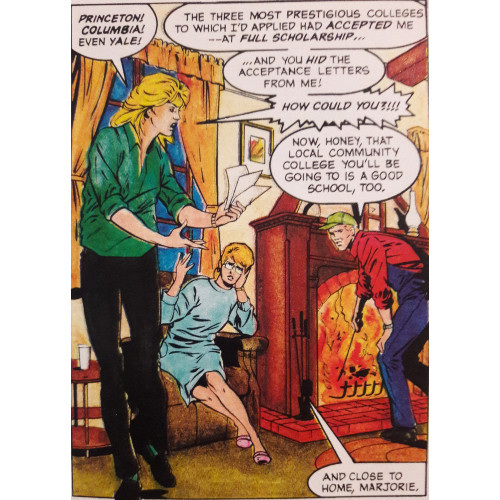 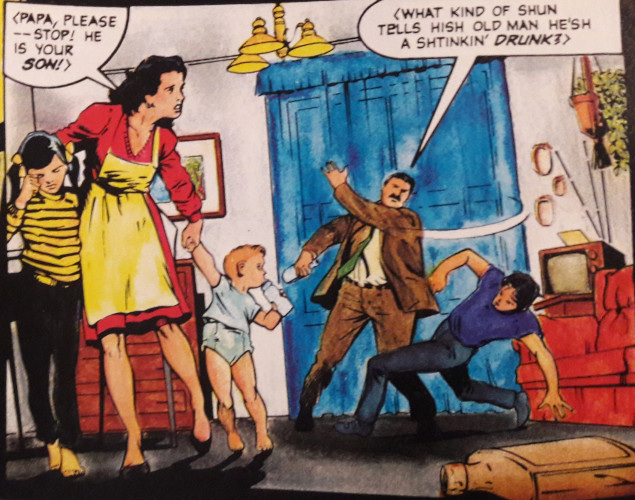 These two characters serve as analogues for our protagonists, almost as if Mantlo is creating a “What if-?” scenario where Cloak and Dagger never received their powers (or, as some would have you believe, possessed their own abilities to begin with). We just have two, normal kids who decided to flee from their living situations and quickly form a bond. Like Cloak and Dagger, they get kidnapped, but nobody injects them with any chemical compounds. They remain the bedrock upon which the rest of the story is crafted, their voices guiding the direction when Cloak, Dagger, and the Power Pack aren’t around. Their humanity gives them a jolt of uniqueness as their story heads down a different path than Cloak and Dagger's history. Our vigilante duo eventually possessed powers with which they could strike back at their tormentors; our young protagonists have no such abilities to aid them against their oppressors.

As the graphic novel progresses, Mantlo juggles the various components well. Ample panels are given to all our principal cast members. Each character is introduced methodically--first the runaways in their divided homesteads, followed by Cloak and Dagger as the light-bearing lass falls into trouble only Cloak can save her from (which, now that I think about it, happens quite a lot in these stories), and then the Power children as they try figuring out gifts for their parents’ anniversaries. Even a disgustingly corpulent villain receives a few pages, and though I would argue his time in the book isn’t enough, his inclusion is at least necessary to offer the graphic novel tension. Cloak and Dagger, admittedly, receive less characterization than, say, the runaway teenagers, but this doesn’t harm the story at all. Mantlo and others have been given time enough to let their characters grow. Sal Velluto's artwork feels like something out of a painting, a distinctly different yet no less detailed depiction of this story than the methods he would use years later on most of Christopher Priest's Black Panther run. 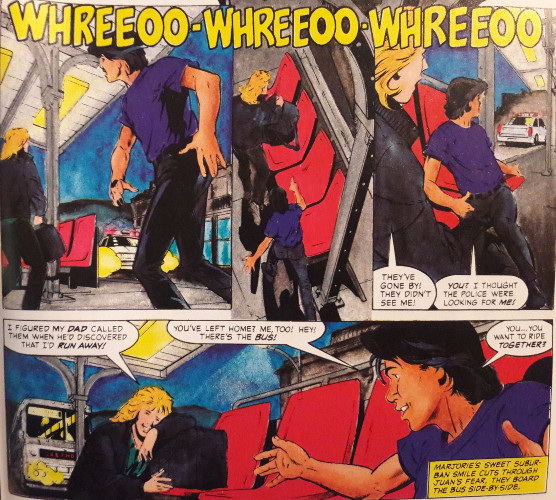 It should be noted that, while this graphic novel was published in 1989, it takes place before Cloak and Dagger’s third series, which Austin largely wrote. Therefore, this tale is intended to happen before events such as "Inferno," "Acts of Vengeance," Dagger’s blindness, and their final confrontation with Mister Jip. Thus, Mantlo must “undo” any bits of characterization found in that series, but again, that doesn’t seem to harm the graphic novel much. I will maintain that Terry Austin contributed almost as much development as Mantlo did with Cloak and Dagger, but I don’t feel like any of that is “lost” when reading a story taking place prior to that series. If anything, Mantlo is able to at least sidestep the somewhat repetitive nature of Cloak and Dagger’s operation. Yes, they get involved with helping runaways, but we don’t get too much of the same old-same old “jumping out of the darkness and swallowing bad guys whole” element of several previous action sequences.

This is, as far as I am aware, the last “Cloak and Dagger” story I will be discussing for some time. They will make appearances in a future tale or two--and, in the case of “Atlantis Attacks” have already showed up briefly--but for the most part, this is where we bid them farewell. Over the last several months (a little over a year now), I’ve been able to chronicle their growth and transition from runaway teens to full-fledged vigilantes. Cloak and Dagger’s first appearance in Spectacular Spider-Man #64 was my first ever Spider-view post, published in May 2020. It seems fitting to wish them a pleasant good-bye after the time we’ve spent with them. The road has not been perfect--I’ve certainly been hard on the repetitive nature of their abilities as well as some questionable narrative/character decisions--but it’s been consistent. This is the kind of narrative I’ve been itching to write about for a while, stories that develop over time, feeding into each other and branching out to show how deep the Spider-Man mythos runs. Other narratives and characters will certainly receive the “series” treatment as I continue writing, so I’m glad to see how Cloak and Dagger turned out over 14 posts. If anything, I’ll treat this as an experiment, seeing how other “series within a series” develop and grow as I keep writing.