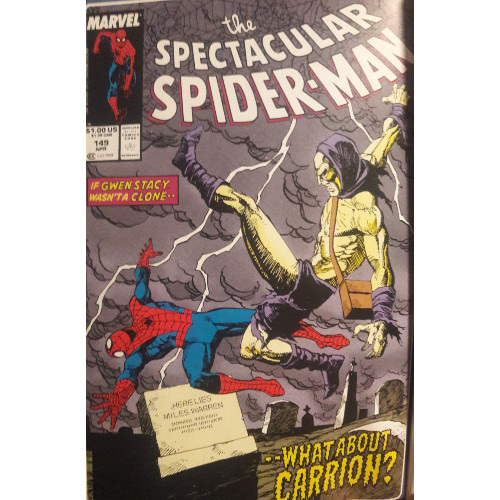 This is where things get hectic.

I’ve remarked periodically that, among other tales, Gerry Conway was the architect behind one of the most famous (infamous?) Spider-Man stories of all time: “The Night Gwen Stacy Died.” The titular Miss Stacy, in 1973’s Amazing Spider-Man #121, met an unfortunate end at the hands of Norman Osborn’s Green Goblin, who died accidentally in the following issue. According to Conway, fans reacted with such vitriol that Stan Lee, who received the bulk of the haranguing, begged Conway to bring her back. One problem: she was only human, and most human characters had a nasty habit of staying dead. Uncle Ben? Kaput. Thomas and Martha Wayne? Still buried. Bucky Barnes? I did say most, didn't I? But Gwen was gone for good.

So Conway cloned her.

The “Original Clone Saga,” as it’s called (which I hope to review as we get closer to the second “Clone Saga"), did just that. Gwen Stacy was back, though she shortly departed Peter Parker’s circle of influence and assumed a new life as Joyce Delaney (and, as you may remember from my “Evolutionary War” review, was eventually revealed as...not a Gwen Stacy clone?!? Again, it’s confusing). Her creator, Professor Miles Warren, assumed a costumed identity, the Jackal, and was seemingly killed after a fight between Peter Parker and a Peter Parker clone (more on all that in the muuuch later future). But his malicious madness lingered.

Early in the Spectacular Spider-Man series, fans were also introduced to a character called Carrion, a villainous Miles Warren clone (yep, more of those) who battled Spidey for a few issues before burning to death. Lovely. You’d think that’d clear the whole mess up, right? Joyce is on her own, the Jackal is dead, his clone is dead… 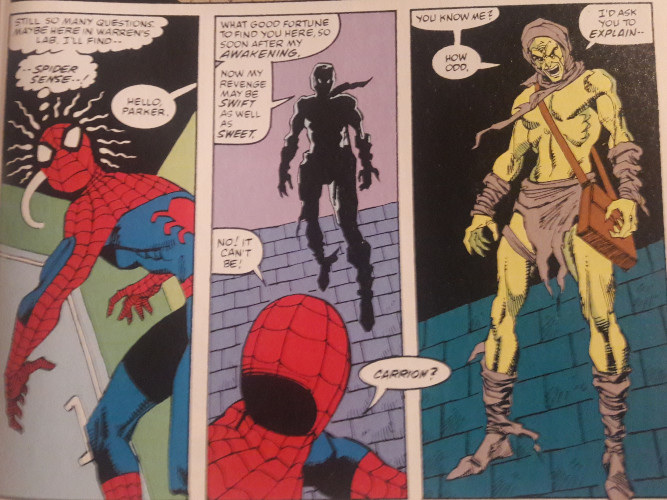 When this issue was published, Conway had used SSM Annual #8 to confirm that, actually, the Gwen Stacy clone was not a Gwen Stacy clone but instead a genetically mutated student of Miles Warren’s (which, if we’re being honest, is probably worse...there’s copying someone’s DNA without their permission, but then there’s copying someone else’s DNA without their permission and then modifying a second person using that DNA without that second person’s permission so they resemble the first person...yeuch). That student, the aforementioned Joyce, was modified on a cellular level to resemble Gwen. It’s also revealed that the “Peter Parker clone” was also not actually a clone but a mutated lab assistant. Yes, at this time, of all this is actual canon: in 1989, the clones were retconned as non-clones, just altered people. This will, in a few years’ time, change. The clones will be clones again. Just something to keep in mind.

I said this was gonna get hectic.

This gets Peter wondering: if neither the Gwen Stacy or Peter Parker clones were actual clones, what about Carrion? When he first appeared, he professed being a clone of Miles Warren...but is that actually true? Thus, this issue’s plot is driven by the continued contradictions and confusing conundrums of the original "Clone Saga." Just wait’ll we get to the second one! 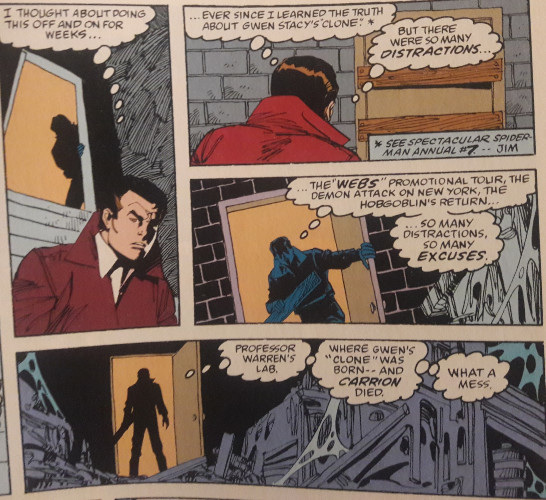 I hadn’t realized, at this point, how ridiculous all of this “clone stuff” was to begin with. I don’t really see any point for Conway to contradict his own story from way back when, especially as most loose ends had seemingly been tied up. So what if the Gwen Stacy clone wasn’t actually a clone? I’m confused as to why such a revelation was necessary, especially as it did nothing but muddy the waters by calling the other clones' statuses into question. But it happened, so there’s no going back on it now.

Conway introduces a new Carrion this time around, a formerly human individual who comes into contact with an experiment of Professor Warren’s and transforms into the deadly murderer. This concept, at least, is told well by Conway. Once Peter realizes what has happened, that he's confronting not a new clone but a man transformed, he faces the situation differently, empathizing with the man’s plight and hoping to find a cure for his condition. It gives the situation a fresh appeal by giving Spidey a Jackal-invented villain to fight who, nicely, isn't just another clone. Awkwardly, though Peter knows the man (Malcolm McBride) prior to his transformation into Carrion, he never learns in this issue that McBride became Carrion, leaving a somewhat dangling plot thread that I wonder if Conway ever sewed up. Do people report Malcolm missing? Does Peter notice the man’s absence and draw conclusions? While Peter he isn't facing a genetic duplicate of Miles Warren, he never learns the man behind the grotesquely altered visage. 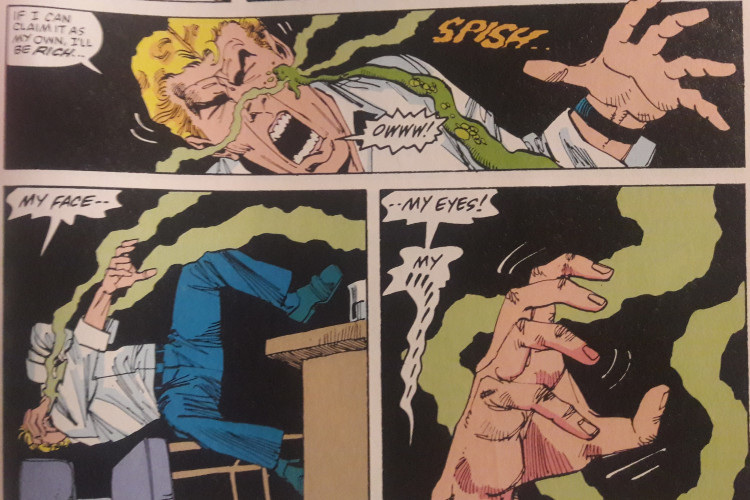 Additionally, Conway twists his original concept for the Jackal: in the first “Clone Saga,” Conway introduced Miles Warren as a man clearly interested in Gwen Stacy, his student...but this, as Conway emphasizes in the story, is intended to be a purely fatherly affection. Granted, Miles is nuts, so we can’t necessarily take what he says at face value, but regardless, Conway only ever hints at anything approaching attraction. It could have been the times he wrote the story in, who knows? Yet Conway doubles down on the “Miles hearts Gwen” idea here, and nothing he does can save that particular detail from being downright disturbing and very awkward. Again, Miles is a screwball, but to re-emphasize that idea or at the very least remind readers of the notion is bizarre and highly unnecessary on Conway’s part. Does it offer a new dynamic to Warren's character and make him scummier? Absolutely. But I think Conway could have introduced other developments instead of "Older professor develops interest in younger student," especially when you realize that motive lies behind Warren's intentions for cloning Gwen originally. 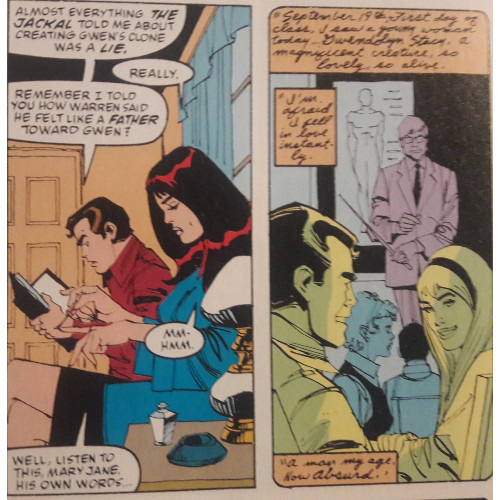 When he isn’t raising havoc by reintroducing clone concepts, Conway sews seeds for additional plots: some of the Kingpin’s men end up mauled by wolves; Glory Grant finds herself a new boyfriend; Robbie’s trial begins. Again, as I’ve mentioned elsewhere, some of these plots remain unfinished once I reach the end of the Conway-crafted Spectacular issues I own, so while I approach the developments with some interest, I can’t really be as invested as I would be if I knew I’d finish these subplots sufficiently with the reading material I own.

I wish I had more to contribute about this issue, but the more I look at it, the less new ideas I take away. So much of this issue is predicated on Conway’s original “Clone Saga,” which I’m hoping to look at with fresh eyes in the “near” future, so I’d rather remain vague about particular ideas or details I have yet to touch upon. The Carrion plot could have been interesting if the Malcolm McBride angle had been delved into deeper, which may just be a casualty of the fact that Conway is using this issue as part of the course correction he initiated in the annual. 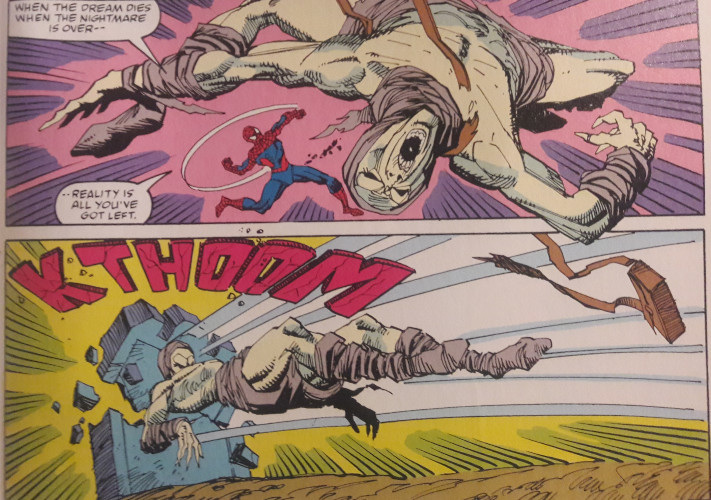 This issue is a rare disappointment from Conway, who’s been batting pretty solidly with the last handful of stories. I’ve enjoyed his style of writing and the plots he’s crafted. But here, his writing feels more prone to exposition as he goes back over a plot he wrote over a decade ago, trying to add to the mythos in a way that just jumbles a story that should have been left finished. “What about Carrion?” this story’s title asks, which prompts me to retort, “Yeah, what about Carrion? Who cares?” I’m not sure I do, but I feel elaborating on this issue is necessary, if not for the quality of the issue itself, but for what it portends: the upcoming and long-running “Clone Saga” of the 90s, which we’ll be examining in great detail. If you’re confused now, your continuity headache is only going to grow into a full-on contradictory migraine.