Though sometimes verbally overwhelming, this collection is nevertheless an important milestone in the mighty Marvel mythos 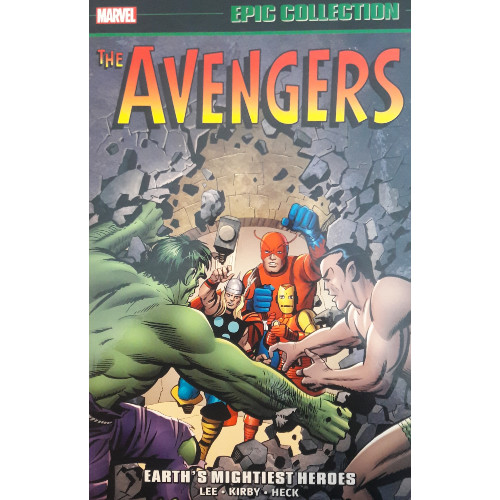 You can hear it sometimes in the back of your head, can’t you?

The swelling of instruments, an orchestral theme building. Maybe, as your mind rings with music, images dance through your head. Portals, opening. Heroes, aligned. A mighty hammer flies into the outstretched hand of a bruised yet determined Steve Rogers. Through gritted teeth, he says the words you’ve been waiting to hear for eleven years:

I can’t be the only MCU fan who’s dwelt upon Avengers: Endgame’s triumphant climax, images burned forever into my imagination as one of the greatest cinematic feats I’ll ever witness. And to think, it all started with an idea.

At some point, Stan Lee and Jack Kirby decided to unite their disparate heroes. Iron Man. Thor. The Hulk. Ant-Man. The Wasp. Eventually, Captain America. They stretched across the confines of their burgeoning world which was not yet a universe and plucked from its various corners a handful of heroes. Maybe the phrase wasn’t uttered at the first, but the Avengers assembled. Since I just shared a so-so Amazing Spider-Man issue dedicated to the Sandman's brief tenure with the team during the 90s, I thought I'd hail back to eras of yore, to see the Avengers take those first, tentative, daring steps into the annals of heroic history.

And we have an Epic Collection to share the first 20 or so issues of what is truly a groundbreaking series. 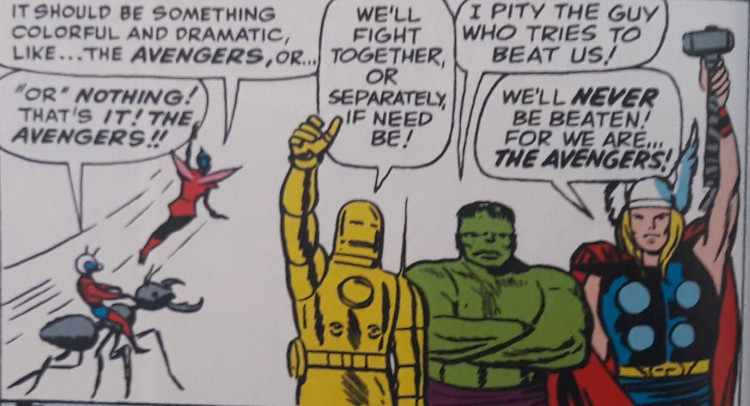 Covering the first two years of Avengers history, this collection is a surprisingly solid entry point into Marvel’s magnificent super-team, if not a tad wearing at times. Most of the volume is overwrought with Lee’s patented dramatic dialogue, ridiculously overwritten, with speech bubbles packing each panel to bursting. Occasionally, the individual issues included can feel slow as one peruses each of the words Lee contributes.

Overall, however, the volume is a wonder. Perhaps Marvel was beaten to the “superhero team” punch by their Distinguished Competition by over 20 years (1940’s Justice Society of America...and let’s not forget DC’s follow up, the Justice League of America), and maybe the Avengers concept doesn’t tread much new ground. Oh, but to be a kid in the early 60s, grabbing the very first Avengers issue and seeing fan-favorite heroes--Iron Man! The Hulk! Thor!--gracing the cover, together for the first time. Even if the idea replicates DC’s stab at superherodom, and even if the team concept had already been introduced by Marvel through the Fantastic Four, there’s something that shimmers about the Avengers.

The series, I believe, represents the fulfillment of the shared universe concept Marvel had been dancing with at the time. Maybe the world wasn’t as wonderfully broad as it is today, packed to the gills with heroes of all creeds and colors. But for 1963, the Avengers fulfill an idea that had loomed for a short while. In execution, though overwritten, it’s done brilliantly. Lee and Kirby bring together heroes you already (hopefully) adore, and each new member to the team only heightens the excitement. Yes, the circumstances under which our friends come together are a little wonky and ridiculous, but the concept works to create a superhero team where none had existed before.

From the get-go, Lee and Kirby are insistent on making their heroes as human as the Fantastic Four. With their original superteam, Lee and Kirby wove epic family drama that humanized their four heroes--the Thing and Human Torch bickered like brothers, Mr. Fantastic and Invisible Girl fell in love, Susan protected her younger brother Johnny. They considered themselves a family rather than a team. The exact same dynamic doesn’t exist for the Avengers, but Lee and Kirby assimilate familial struggles and bonds where they can. They make it clear that this is a group of disparate people, thrown together by circumstances they could not control, and now must live in that reality. Every so often, their ideas don’t quite gel--Janet van Dyne’s Wasp comes off as shallow, something modern day readers may frown upon. But core characteristics come to light early and are maintained through Lee’s run. One particular issue weaves in a running gag where members of the team refer to each other as “Avenger,” showcasing the group’s burgeoning comfort with their collective role. 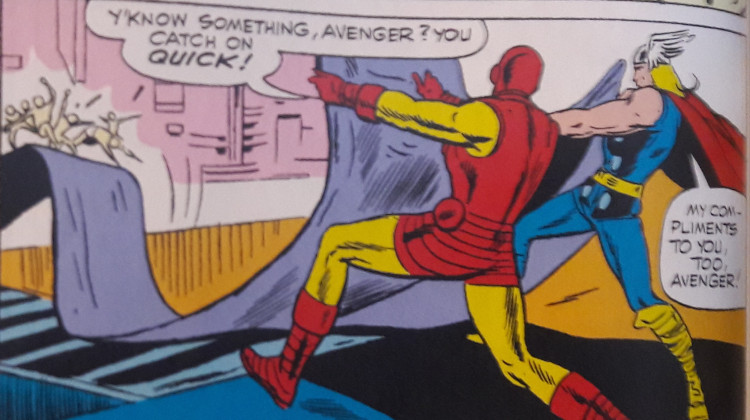 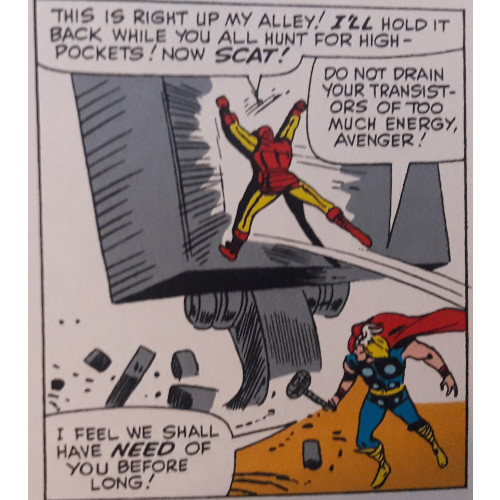 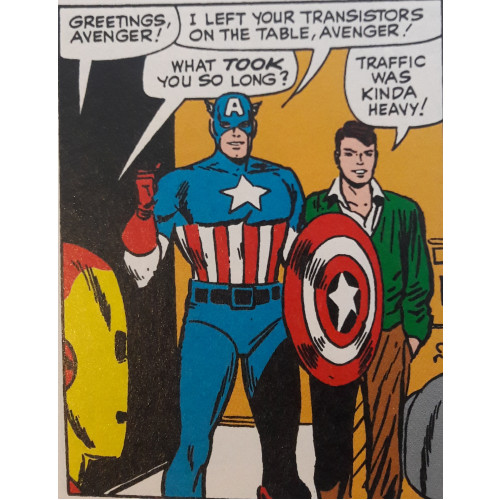 “Identity” becomes a surprising theme running through the issues collected. Each hero maintains their own secret identity, keeping their real selves hidden from their newfound costumed compatriots. Tony Stark keeps his distance as Iron Man, perpetuating the “Tony Stark’s bodyguard” narrative while funding the team and offering them a headquarters. Thor worries about transforming into Don Blake, the injured doctor, in front of his allies; not only would such a transformation remove his powers and reveal his mortal guise, but it would place him in a position of great vulnerability. Even the Hulk, more of an on again/off again member of the team (with emphasis on “off”) plays into the dual identity notion, fearing he’ll turn into Bruce Banner, that puny nerd.

Unease filters through the issues, and I can only imagine this was intentional on Lee’s part. Though the team gradually grows together and becomes more compatible, a feeling of disquiet and a lack of trust permeates the group. This is a team that is really only called together when necessary, though they try their darndest to become cohesive. They’ve got a lavish HQ, hold important meetings, elect a chairman. Despite these attempts at finding unity, discord latches onto them at unsuspecting moments, threatening multiple times to tear the team asunder. 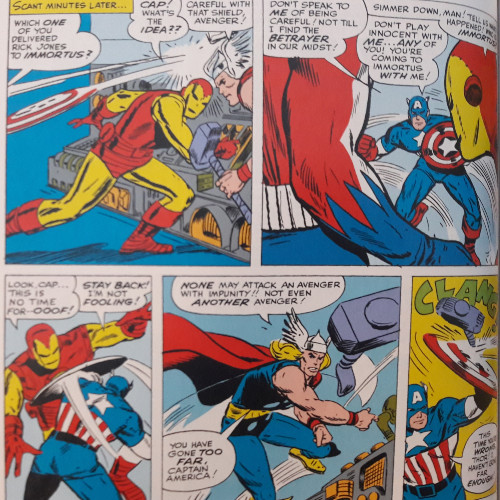 Lee and Kirby majestically balance out the internal threats with external foes, pulling from a cavalcade of crooks to face the team. The original Masters of Evil strengthens the universe-building approach by featuring enemies who’d fought each of the Avengers one-on-one--the Black Knight, Radioactive Man, the Melter, and Baron Zemo band together to end our heroes. A later incarnation of the villainous team brings in Thor foes the Enchantress and the Executioner. The presence of these old adversaries adds to the connectivity between our various characters, giving them familiar faces to fight, with the Masters presented as an almost anti-Avengers. New threats abound, to be sure--Kang the Conquerer becomes a recurring foe, Immortus nearly causes the group to disband, the dashing Swordsman acts as a pawn for the Mandarin. Lee and Kirby are always creating, finding ways to enhance the narrative and introduce new dramas while paying homage to the history they’ve already crafted.

Our creators also toy with the team’s malleability, promising early on the Avengers’ roster isn’t as inflexible as the Fantastic Four (despite that team's loquacious limber leader). The series’ fourth issue marks a dramatic turning point by ushering in Captain America, his first appearance in comic books since the 50s (or, at least, the first new appearance of the actual Steve Rogers...one phony Cap took on the Human Torch a few months before the real hero popped up). Cap’s re-introduction into the comic book world is a genuine wonder, particularly in how Lee brings the living legend back into a world he’s so unfamiliar with. He gives Cap the same identity struggles he gives his other heroes--who is Cap supposed to be now? How does he fit into this newfangled, modern-for-1963 New York? Cap’s fears and concerns, prompted by the loss of his then-dead-sidekick Bucky, craft him into one of the more compelling characters on the team. A running side plot sees him desperately seeking revenge against Baron Zemo to atone for Bucky’s loss, further deepening his character. 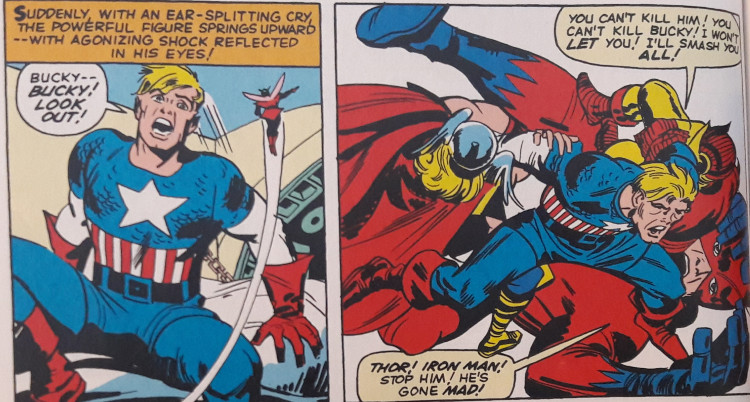 As issues progress, Lee, Kirby, and Don Heck (who replaces Kirby as the primary penciler with issue #9) promise the concept of change more and more. A decent ways into the volume, Iron Man, Ant-Man, and the Wasp depart from the group, leaving gaps filled in by Quicksilver, the Scarlet Witch, and Hawkeye. Maybe it’s because I read a bunch of Lee/Roy Thomas X-Men comics a while back, but I was genuinely intrigued by the appearances of the former mutant terrorists. The twins had never really been “evil,” simply guided incorrectly by the crooked hand of Magneto. Lee offers them and Hawkeye the seeds of redemptive arcs, changes to turn away from their criminal pasts, a theme that would be seen through the Avenger careers of future cast members such as Black Widow, Wonder Man, the Vision, and the Swordsman.

Lee and Heck’s new team isn’t quite as memorable as the original. Lee feels the need to ratchet up the “internal quarrel” quota with his newcomers, consistently placing Hawkeye and Cap at odds with one another. Even in the handful of issues these new Avengers appear in, their sniping gets old quickly as the struggles have very little impact on the plot. I was often reminded of Lee’s work on the Jean Grey/Scott Summers romance over in X-Men. He inserted the seeming tensions but never moved past the simple “Will they?/Won’t they?” plotline. Nothing advanced or changed. At the moment, Lee leaves the new team’s struggles at a similar place. Perhaps it’s simply the fact they only appear for four issues prior to the volume’s end. Perhaps the second Epic Collection will offer greater advancements in plot and team dynamics. 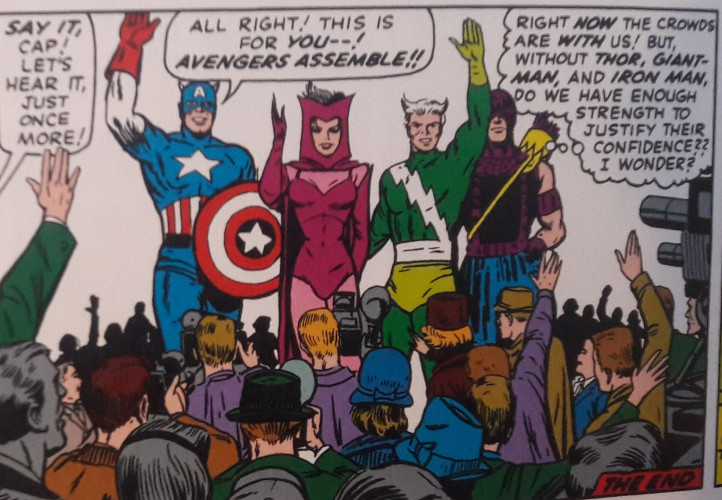 I’m looking forward to that second volume, stilted as I’m sure it will come across at moments. I am genuinely interested in Roy Thomas’ run on the title, which I know birthed at least one famous arc with the “Kree/Skrull War.” Lee’s ideas, to me, have always been stronger than his writing. When I recall his work, I focus less on the narratives themselves and more on the clever concepts he crafted. The injured iron monger who gains a heart by first having it pierced. The arrogant doctor who learns to save lives in a way other than with his hands. That spider-guy who wrestles supervillain assaults with homework and an aging aunt. A team of superhumans with a World War II hero wildly out of time, an armored hero who hides behind his mask, a Norse warrior afraid of becoming normal, and a walking gamma bomb who waffles between friend and foe. Ridiculous as some of his stories may be, Lee injects a ton of heart into the Avengers. With Kirby, he helped birth the Marvel Age years before any of his characters hit the screen, and this volume is but a taste of the epic action and heights which await Earth’s Mightiest Heroes.