An engaging premise for potential character growth and unique parallelism is damaged by a weak, construed ending 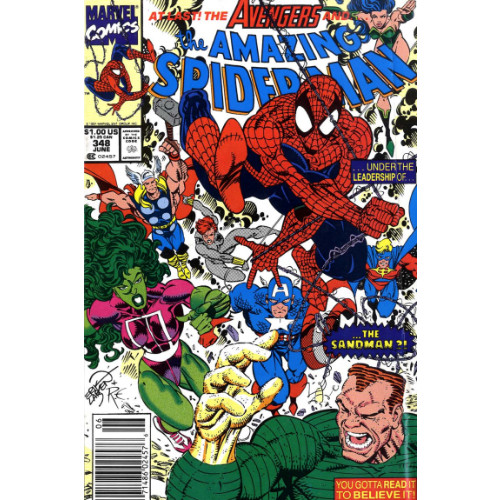 He’s been known by many names: Flint Marko. William Baker. Sylvester Mann. Much like the granular particles which make up his body, the Sandman’s own identity has shifted from time to time, as has his moral persuasion. Introduced as a Spidey foe way back in Amazing Spider-Man #4 (definitely an issue for any fan to check out…Spidey beats him with a vacuum!), the Sandman has been one of the most consistent and enduring evildoers gracing Spidey’s rogues gallery. A persistent member of the Sinister Six since its earliest incarnation, Marko’s silica-shaping alter ego is the one guy who can claim to have a literal beach bod…and he often uses it to try and drown Spidey in a tidal wave of powdery pummelage.

Yet there was a time, perhaps not that long ago, when the non-dreaming, non-Neil Gaiman Sandman wished to switch from villainous to virtuous. When Doc Ock found him during “Revenge of the Sinister Six,” Sandy boarded with a kind family, having given up a life of criminal capers; in fact, Octavius needed to threaten the family to force Marko to do his bidding. Between then and now, Sandy’s been working with Silver Sable’s Wild Pack and Outlaws and, after receiving a presidential pardon, he even became an Avenger!

I mean, y’know, a “reserve” Avenger, but still… 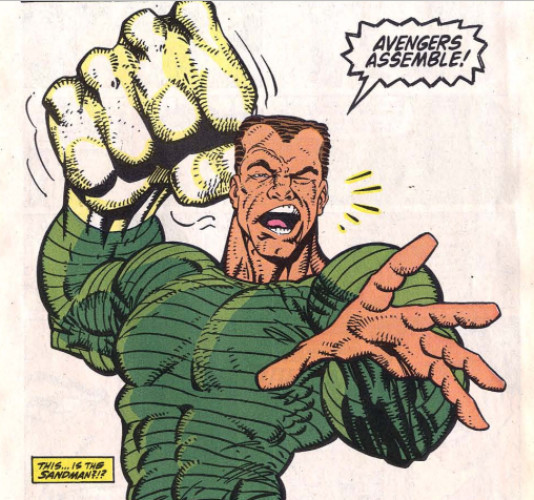 Sandman’s dusty trail from supervillaindom to superhero status can be traced all the way back to ASM #217, where Marko collided with Hydro-Man, a water-based supervillain, and the two temporarily merged into the King Kong-esque Mud-Thing. Lasting a single issue, the composite criminals were defeated in ASM #218 and, eventually, separated. Shortly thereafter, Marko bumped into the not-Mud-but-Ben-Grimm Thing and experienced a whole other kind of transformation: internally.

This is the state we find Flint Marko–now going by “Sylvester Mann,” because why be subtle about your pseudonym?--currently in. His talk with the Thing has left him with a desire to change, and recent actions with the Avengers have given him a bit of new purpose. He even stymied the Wizard’s recent attempt to convert him back to villainy. Sandy gets that he’s a reserve Avenger, not at the level of Cap or Thor or even Quasar…but he’s an Avenger, man. He’s got the title. He’s probably got an ID card, too.

This issue is essentially Michelinie’s continuation of that concept and a sort of “update,” peering into the life of Flint Marko–I’m sorry, Slyvester Mann–and seeing how the former bad guy is doing on the straight and narrow. It’s a nice shift, tonally. Michelinie’s been throwing a lot into the comic lately, what with the return of the Sinister Six, the introduction of Cardiac, and Spidey’s recent island fiasco with Venom (heck, he probably coulda used a Sandman there). This is simply a nice, short one-and-done kinda tale, something fun thrown into the mix of the all insanity plaguing Peter Parker lately.

So you don’t get a whole lotta progress happening in Peter’s life in this issue, which is pretty fine considering the roller coaster it’s been lately. Michelinie even uses this as a narrative device, as he very cleverly contrasts Marko’s life with Peter’s. Our boy Pete’s in one of his sulkier moods as the issue progresses, as he’s still mentally working through his recent near-death experience with Venom. MJ doesn’t seem to be listening, Jonah’s bugging him at the Bugle (always pestering Peter for those shots of Spider-Man!)…he can’t even get any lab work in because his room’s being borrowed by a visiting group of students. Everywhere Peter turns, it’s a door in the face, one right after the other. After nearly avoiding death on an island, Peter’s just looking for a little community, somewhere to connect and recall what normal life looks like for him, or as normal as life can get with spider-powers (though he seems to forget that life wasn’t less chaotic, and perhaps a little less purposeless, when he didn’t have those abilities). In an issue dedicated to the Sandman, this is as good as Peter’s characterization is gonna get. 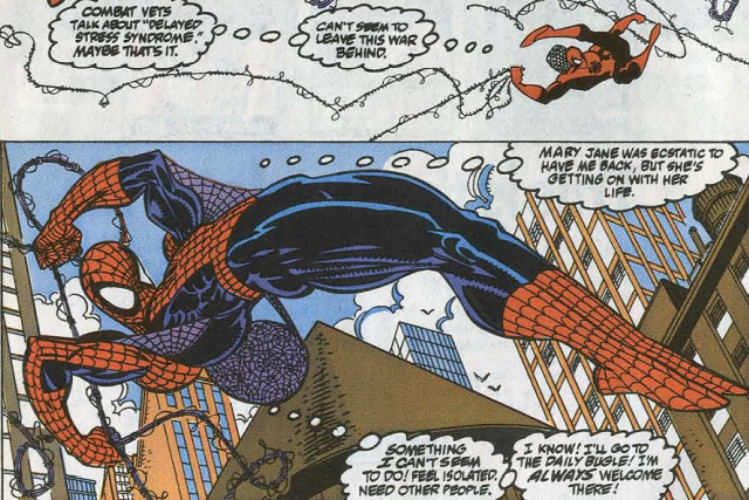 The issue ends with Peter rolling into bed next to MJ and admitting to himself that, hey, maybe life isn’t all that bad. He compares himself to Marko (who I’ll touch on in a bit), seeing that the guy’s been bit by his own radioactive spider…except this arachnid’s pumping “change” through its fangs. Sandman wants to turn over a new beach, reinvent himself, become a different guy than the schmuck who got sucked into a vacuum the first time he fought Spidey. And Peter, to his credit, sympathizes with him. He understands the Sisyphean task before Marko and takes a moment to be glad about where he himself is. Still, it’s just a tad shallow, nothing that we haven’t seen before in past issues.

The real focus, obviously, is the Sandman and his attempts at proving himself to his Avenger compatriots. The set-up is engaging, as Michelinie focuses on this character who really wants to start over and keeps looking for opportunities to prove his worth as a hero. The results are admirable but conclude awkwardly. Michelinie doesn’t necessarily play the “grains for brains” angle he may have done with the character–turning Marko into a schmuck whose heart is in the right place but fouls up his shot at redemption. A little plot convenience gives Sandy his opportunity, and he takes it, actually doing a halfway decent job at saving some folks and stopping a heist. He even brings in the Avengers to lend a hand and save the day… 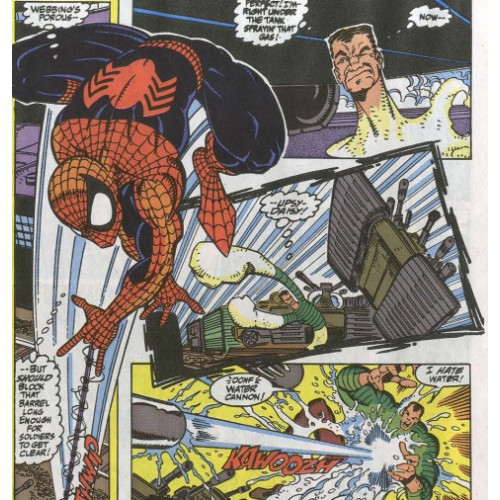 …which is where things go pear-shaped.

Again, the set-up is nice. Michelinie gives Flint his moment, his chance to do some good, and he takes it and runs with it as fast as his sandy legs can carry him. Quasar, Captain America, She-Hulk, Thor, Black Widow, and Sersi zoom in and stop an armed heist, with Sandman taking the lead and helping as much as he can. Spidey even gets in the action a bit, just in case (to paraphrase an often-used Marvel Comics quip) we forgot whose mag this was.

And then Captain America ruins the whole thing by reminding Flint of the Avenger's “new charter,” which limits the team to global threats and alien invasions. Leave the domestic quibbles to local folks, essentially, like that guy who shoots webbing from his wrists. 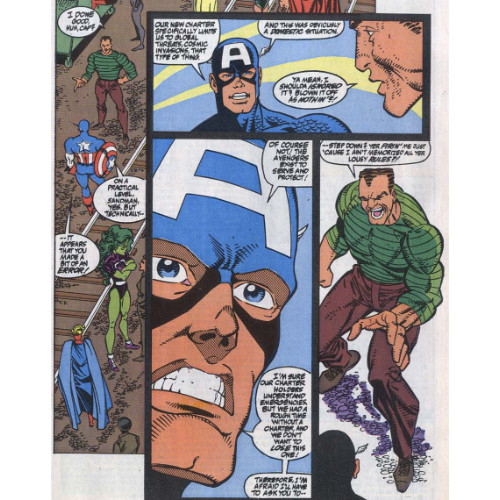 I’m sure all of that made sense over in the main Avengers title. I’m sure the whole “new charter” bit was explained there and offers context over the entire situation, why this “new charter” was adopted and why it limited the Avengers to these big brouhahas. I'll add that the idea seems really kinda stupid, especially if it's not from an engaging philosophical angle like Civil War used, but I don't know enough about the arc to chastise it in its own title. But to tack it onto the end of this ASM issue as a way for Cap to slap Sandman’s wrist is cheap. Michelinie then has Sandman react poorly to Cap’s silly “Oopsie daisy” and stomp away like a petulant child, reconsidering his stance and wondering, in his words, if returning to a life of crime “might be the only way.” He misconstrues Cap’s admonishment, believing the All-American hero’s gonna terminate his Avengers membership and, before Cap can even get the words out that he was just gonna give Sandy a friendly warning for the future, storms off in a huff.

The whole scene is silly, particularly for a reader not in-the-know about this Avengers charter business. I’m all for comics crossing over and impacting one another, and I wouldn’t even mind reading a story where the Avengers genuinely grappled with this new status. But to fire it off at the very end of this issue and have Sandman react the way he does is ludicrous. After spending a whole issue playing up Sandman’s transformation–particularly after the work other writers have put into reforming the character, plus Michelinie’s own work in “Return of the Sinister Six”--Michelinie has Marko basically consider returning to crime, just like that. So Captain America chewed you out, so what? Marko doesn’t even give him the opportunity to finish his sentence, and Cap doesn’t even go after him to try and smooth things over. 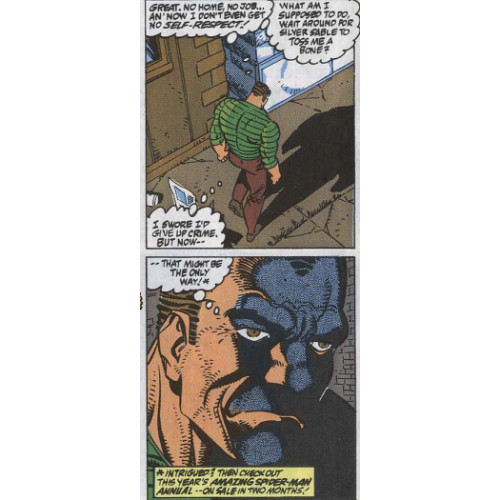 And, again, it’s not like Sandman’s an unintentional idiot here. Michelinie even has the character comment on how difficult recalling all these Avengers rules are, especially if you’re just gonna wag the “new charter” business in his face without any context.

I assume Michelinie was merely playing to the constraints created by the Avengers’ new status, but it’s still a shame. The ending hurts the interesting work Michelinie has piled into the rest of the issue and even undermines the parallelism he attempts to create between Spidey and his flaky foe. One of the reasons I genuinely love comics is for the chance to follow arcs such as these, seeing how a guy like the Sandman grows and changes over the decades. Here, though, Sandy slinks a step backwards, washed away a little bit by a sea of coincidence. A tiny morsel of himself is gripped by the water and pulled away from the rest of this artificial edifice made to look like a castle. As a result, the castle begins to crumble.