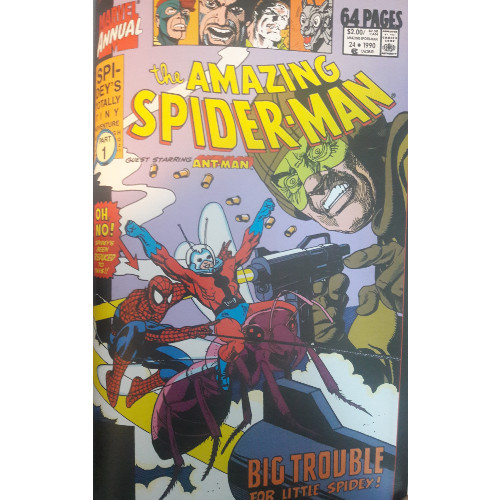 The last couple of times we looked at Spider-Man annuals, they were grafted into a few overarching adventures that spanned the Marvel mythos. “Evolutionary War” saw Spidey take on a couple of stooges belonging to the High Evolutionary and discover that Gwen Stacy clone Joy Delaney wasn’t actually a Gwen Stacy clone. “Atlantis Attacks” saw various heroes engage the might of villainous underwater kingdoms as Deviant priest Ghaur attempted to gain power for himself. Neither crossover event was overwhelmingly engaging, instead coming across as a menagerie of different plot points that sometimes didn’t add up. Spidey, for example, fought three different sets of the Evolutionary’s thugs but never put two-and-two-and-two together or used his battle prowess to aid in the larger fight against the mad scientist.

Different writers, different artists, and different agendas all most likely contributed to plots which seemed disjointed even though each issue was supposed to be a chapter within a larger narrative. I’m appreciative, then, that the creators behind Spidey’s 1990 annuals decided to scale back the “to the ends of the earth” type of stories and focus solely on Spidey. 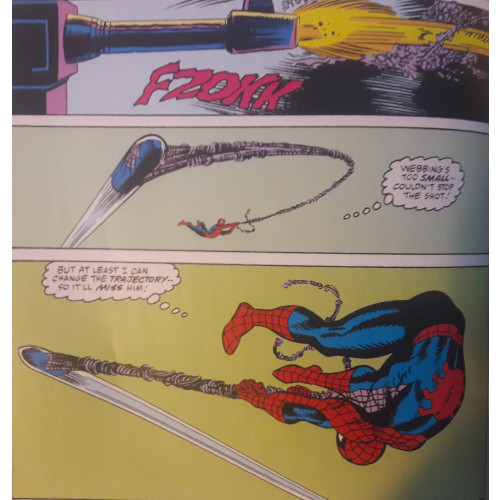 We’ve got a whole three-part tale here to examine today, along with several smaller back-up strips, and I gotta say, these are some of the best annuals I’ve discussed in a while.

The point of annuals, I would argue, is to tell unique, possibly larger stories which wouldn’t necessarily fit anywhere else in a series’ regular run. It’s why Stan Lee and Steve Ditko presented the Sinister Six in Spidey’s first ever annual back in 1964. By relegating it to an annual, Lee and Ditko were able to tell this extremely fun story without interrupting their flow of regular tales and were given a heftier page space in order to tell it properly. 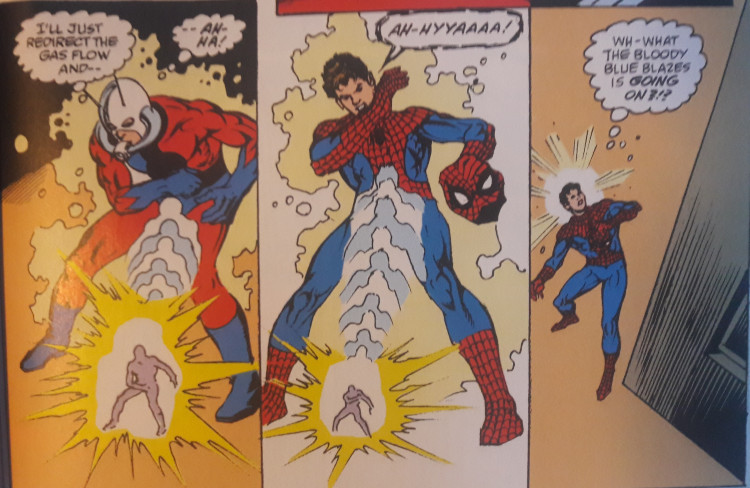 One could argue the same concept was central to the previous annuals we discussed–both “Atlantis Attacks” and “Evolutionary War” could have benefited from the multi-chapter presentation provided by annuals. If the annuals had utilized that format correctly, I would agree. One could also reflect upon some of the standalone Spidey annuals I analyzed, single-issue stories which felt more important or unique and thus deserved to be told in annual format. I’m thinking Peter and Mary Jane’s wedding, Peter David’s first “Ace” story, perhaps even Ann Nocenti’s “Future Max” story in Web of Spider-Man’s first annual. The stories varied in quality but presented themselves in a one-and-done format which was served well by the annuals that told them.

These annuals feel like they harken back to that central premise, where unique, clever, or just different stories are told outside the confines of regular comic book continuity. “Spidey’s Totally Tiny Adventure” makes a few references to the recent, multi-part “Cosmic Spidey Saga,” but as important as those references are to the story as a whole, they don’t detract by pulling your attention away from the central narrative our writers construct. 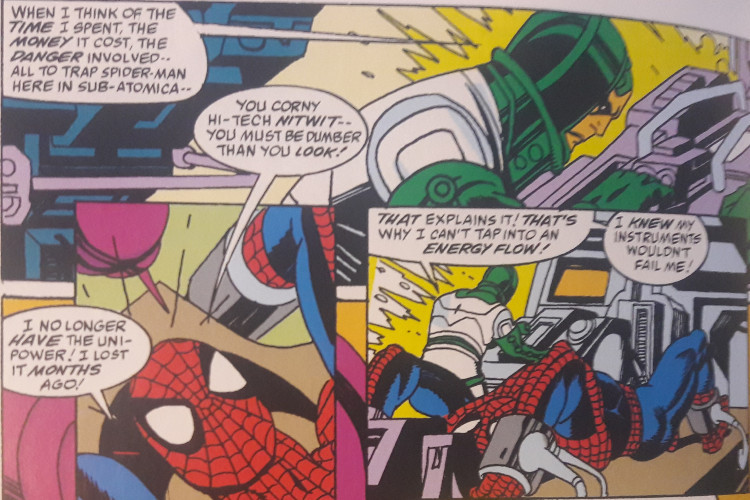 The story itself has some merit, if primarily because it gives Stan “The Man” Lee a chance to return to pen the adventures of his famous co-creation. Oddly enough, while Steve Ditko provides art for a few of the back-up strips, he’s not given a chance to work with Lee here. It’s sad, as a Lee/Ditko team-up would have been really engaging, a return to the classic collaboration between the two men. Lee’s scripting is valiantly verbose and nonchalantly goofy, typical Stan Lee fare. Our story sees Spidey shrunk accidentally by Ant Man (Scott Lang) and then whisked away into the Microverse as his body continually becomes smaller.

The narrative, as noted above, is very Spidey-driven, a welcome change from previous annual efforts. As a whole, the story breaks down a little bit, as I’ll elaborate on in a moment, but the central premise works surprisingly well. Lee and David Michelinie handle the “Spidey is tiny” elements engagingly, toying with his powers and webbing to create amusing conflicts between our hero and some much larger opponents. Spidey’s ability to rattle on about quarks and the Microverse reminds readers of his science background, as does his giddiness in the first chapter’s opening pages. Peter Parker, attending the convention where he’s shrunk, snaps photos for the Daily Bugle on the surface; on the inside, he’s geeking out. It’s a fun reminder of Peter’s foundational elements…the characteristic kind, not the periodic ones. 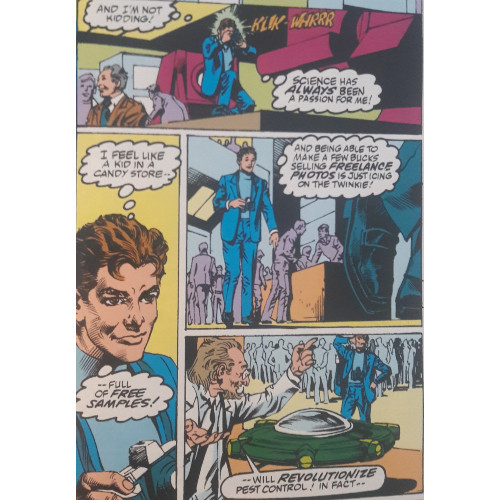 This trilogy of issues doesn’t start out–dare I say it?--huge in execution, but as it progresses, Lee specifically tries deepening the story in a way that doesn’t work as well. He trots out the Psycho Man as the central villain, and as appropriate an antagonist as he is for our subatomic Spidey to confront, Lee tries encapsulating this idea that Crazy Guy has been plotting this for a while. What starts off as a mere coincidence when Spidey bumps into Ant Man becomes a central plot the villain has sneered over. The whole thing is somewhat unbelievable, and while Lee valiantly attempts to tether the tale to Spidey’s recent “Cosmic” shenanigans, the “plotted this from the beginning” aspect feels lackluster. I think I would have preferred that Lee left Psycho Man in as a mere coincidence, as just the right kind of villain for Spidey to bump into as he traverses the Microverse.

Also–and this is almost an aside–Lee crafts a somewhat awkward interaction when Mary Jane brings a shrunken Spidey to Harry Osborn for help. I somewhat question Harry’s aptitude for knowing the right science in this situation, but perhaps even more puzzling is Harry’s nonchalance with the situation. He doesn’t question why MJ would bring Spider-Man to him, where Peter is, or why they wouldn’t turn to Peter in the first place. Could some kind of off-panel discussion occurred between them? Certainly. But I find the idea hard to swallow. Add to this an incredibly random scene where wannabe terrorists raid OsCorp, only to be stopped by Spider-Man, who’s then shunted off into the Microverse and then never asks about the bad guys once he gets back, and I am a tangle of confusion wrapped up in my own web of “Holy Plot Convenience, Bat-Stan!”

Kooky as some of Lee’s logic can be, the story is still entertaining enough to rank it higher than previous annuals. The issues also soar when you consider the back-up strips included. We’ve got a “Who’s Who?” of writers and artists assembled for this menagerie of mayhem:

*Gil Kane, no stranger to Spider-Man and Iron Fist narratives of years past

*Peter David, who penned “The Death of Jean DeWolff,” its sequel, and a few annuals I mentioned before

*Rich Buckler, who contributed to both “The Death of Jean DeWolff” and Don McGregor's excellent Black Panther saga “Panther’s Rage”

*Todd McFarlane, who we’ve seen on a few prior ASM issues

*Alan Kupperberg, who you may remember from Christopher Priest’s “Honeymoon” annual and a two-part Black Cat-centric Spectacular Spider-Man arc penned by Peter David

*June Brigman, who helped with a couple of different Cloak and Dagger series 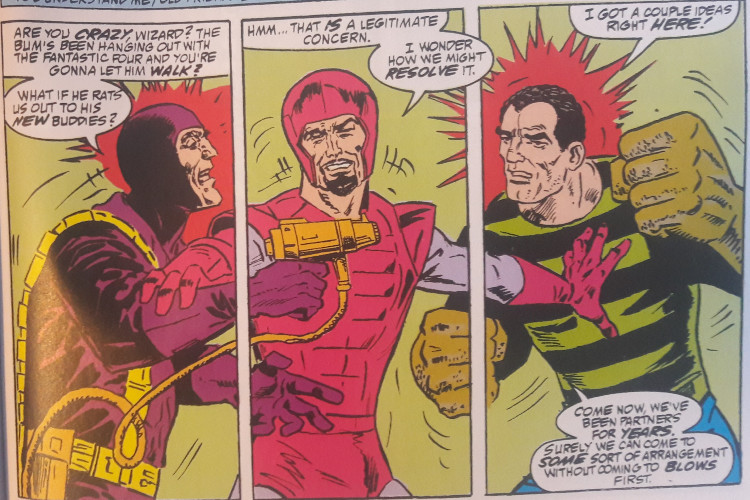 I intend on discussing the stories, but I can’t pass up the chance to mention some of the talent assembled here. As much as I love untangling continuity and praising the connections between stories, I also get a thrill out of recognizing the writers and artists who put these tales together. I find myself drawn to a particular creator’s name as often as I love finding good stories themselves. Seeing “Rich Buckler” on a title card instantly reminds me of his work with Peter David or Don McGregor; I hear “J.M. DeMatteis,” and I immediately recall his classic “Kraven’s Last Hunt” and the other stories of his which I’ve enjoyed. These annuals put together several talented individuals to craft strong content.

Several of these stories work fairly decently. DeMatteis and Zeck craft the first half of a two-part Sandman story which sees Flint Marko struggle with his recent attempt at reformation (after a slight hiccup where he joined Doctor Octopus' newest incarnation of the Sinister Six), followed by a strong conclusion by Isabella, Andru, and Kupperburg (who, despite being a completely different creative team, work well to keep the same narrative feel as the first part). Steve Ditko pencils a Solo story (note: Solo’s a mercenary who can teleport, no relation to Han) that’s surprisingly violent for a Ditko story yet reflects a decent maturity on the acclaimed artist’s part. A brief Conway/Andru narrative sees Aunt May aid the Punisher–yeah, the Punisher–by faking a heart attack and distracting some terrorists long enough for Frank to get the deadly drop on them. Cold-hearted witch. 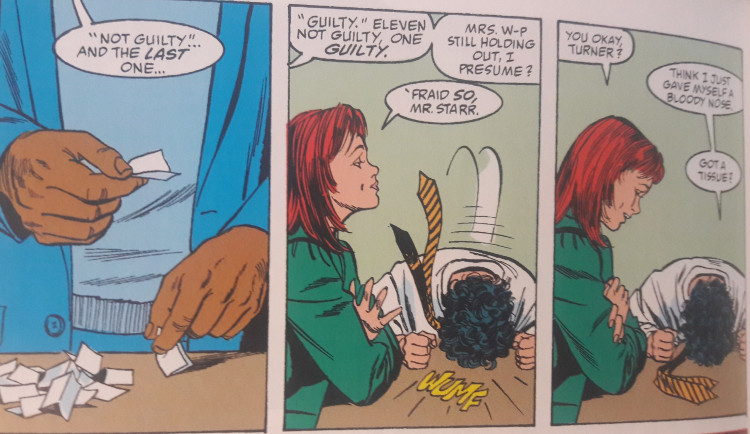 The best back-up tale, by David and Brigman, is a wonderful adaptation of the classic film 12 Angry Men, with Mary Jane doing her best Henry Fonda (Mary Jane Fonda?) impression, to the consternation of 11 other jurors. David unpacks their dilemma well–an amusing case which sees the defendant blame Spider-Man for a crime MJ’s “insider knowledge” clearly alerts her against. David gives several of the jurors characterization through cleverly-constructed dialogue, adding in his trademark wit and biting humor through several panels. Running gags and jokes pepper this short tale, yet the whole piece feels impactful and allows MJ some much-needed time in the spotlight, somewhat separate from her hubby’s all-consuming heroic hobby.

“Spidey’s Totally Tiny Adventure” is a mixed bag, a somewhat lackluster story pulled from an interesting premise, somewhat waylaid by Lee’s fondly-goofy-yet-occasionally-incoherent style of writing. Compared to recent competition, fortunately, this story outperforms previous annual narratives. It’s the smaller stories stuffed into the backs of each issue which shine here, allowing several writers and artists to utilize their skills well and craft some genuinely entertaining narratives in a limited page count. It’s a testament to the talents of creators like Ditko, David, DeMatteis, and Zeck that they could use the time allotted to fashion engaging stories that end up feeling more polished and pertinent than the larger story preceding them.