This volume artfully builds upon its predecessor, balancing out goofy science-fiction narratives with strong character-driven moments and arcs 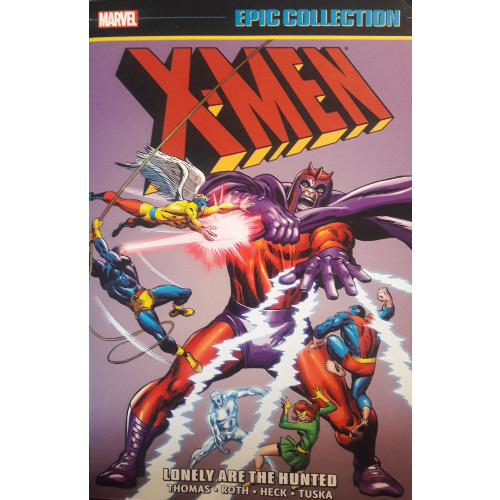 After delivering 19 issues of mighty mutant mayhem, X-Men creators Stan Lee and Jack Kirby departed the series, letting Roy Thomas take over as writer and Werner Roth as penciler. Closing out the issues we discussed in my review of the first Epic Collection, Thomas and Roth bring their particular brand of mischief to the second volume.

Thomas’ vision for the series ends up being quite different from Lee’s original intention, so I’m excited to dive into these tales and see where the men diverge. If you’ll remember, I criticized Lee and Kirby’s execution of their concept--using the X-Men as superhuman stand-ins for racial issues--saying that the two may have been downright die-hards when it came to expressing their mission statement, yet did so in a way that felt heavy handed. Readers were thrust into a world where mutants just were, popping out of the woodwork hither and yon.

We’ll see what kind of focus Thomas gives our titanic teenagers in this next set of tales, as he takes what Lee and Kirby initiated and runs with it in his own special course.

Thomas abandons Lee’s plans pretty much immediately at the start of this volume. Stories of politically besieged mutants are little found in the material here. Mutants are not presented as this awfully distrusted group among society, nor are the X-Men themselves generally spurned by homo sapiens at large...at least, not in the main stories. Redirecting his focus, Thomas chooses to tackle more “out there” stories and characters; villains such as the Brotherhood of Evil Mutants are replaced with one-time baddies like the Locust and his bug-embiggening technology, a resurrected Mayan god, a devious warlock and his subterranean kingdom, and an Iron Man ripoff driven temporarily nutty by an accidental electrical surge. These tales and villains take the series’ in a decidedly sci-fi direction, and while the change is certainly not unwelcome, few of these issues feel permanent or pertinent to the concept of the team as a whole.

Thomas is, it seems, definitely trying to find his footing tonally--having abandoned Lee and Kirby’s original focus, he needs to discover his own voice and storytelling capabilities. These initial stories, therefore, don’t come off as strong as some of his later stuff. Occasionally, he’ll turn to some of Lee’s ideas--the Mimic reappears for a few issues, and the Juggernaut plays prominently in one story arc--weaving in elements of the old. Magneto, somewhat surprisingly, is largely absent from this volume’s proceedings, popping up for an engaging finale story arc that sees the miserable master of magnetism seemingly killed off by the narrative's end. Thomas’ reluctance to pay deep homage to Lee’s work is understandable, specifically as the writer seems confident in forging his own path. 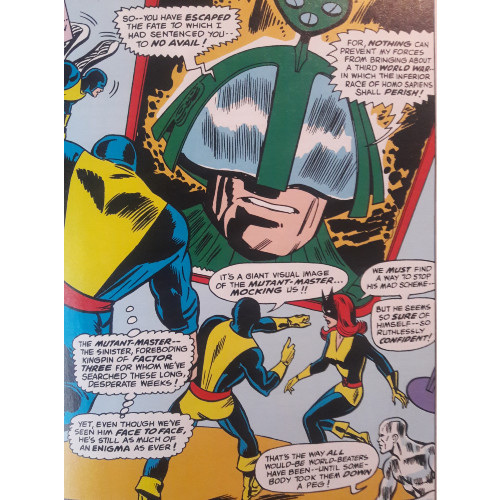 Fortunately, his diversions pay off, from a narrative standpoint, the deeper you get into the volume. Thomas seeds references to a larger plot early on--mentioning in hushed whispers the presence of a villainous group known as Factor Three--and steers his plot toward that arc. Ultimately, the "Factor Three Saga" will take up about nine of the issues in this volume, a decent-sized story arc for Thomas to tackle. The Factor Three plot is nicely layered, teased early on with the introduction of new villains Ogre and Banshee (the latter of whom, under Len Wein and Chris Claremont, will later join the X-Men), and slowly incorporating larger and larger chunks of story until our merry mutants are taken a whirlwind adventure across continents in search of a missing Professor X. A few issues meander away from the general story to offer some “padding”--the X-Men battle Spidey in one issue after mistaking the hero to be a Factor Three agent, and our five freedom fighters are distracted by a new supervillain in New York while figuring out airfare to Europe--but Thomas generally maintains decent control over the rest of the arc.

This is, wonderfully, the first “larger” arc the X-Men have experienced since their creation. Most of Lee and Kirby’s work ran a handful of issues--the Sentinel saga topped out at three issues--and several of Thomas’ stories run the length of one or two issues themselves. For him to buckle up and extend his plot for several issues makes the Factor Three arc engaging and highly entertaining. There’s a rhythm to the plots, a central focus that exists even when particular issues move a little away from the overarching story. Even the smaller issues are entertaining in their own right--disconnected as the "find airfare" subplot is from the rest of the arc, it nevertheless points to the very human lens through which Thomas views our heroes: even X-Men need to scrounge to buy plane tickets sometimes! 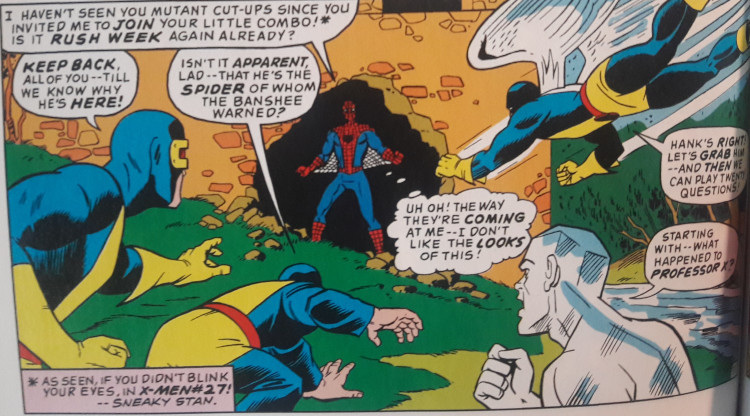 Through all this, Thomas also maintains excellent characterization. Jean Grey, who Lee lamentably used sparingly during his tenure, is given a nice power boost and some plotting of her own as Thomas sends her off to college. Her relationship with Scott Summers takes a nice turn as well; largely gone are the mental mumblings of our two lovesick puppy heroes as each weeps about the various reasons why they could not be with the other person. Instead, Thomas very subtly builds a friendship and partnership between the two, allowing their characters to grow rather than shoving the relationship through the eye of Lee’s forced dialogue needle. If you’re not careful, you may end up actually missing the moments where their friendship deepens, but I’d rather Thomas remain too subtle than become bludgeoning-ly obvious.

Thomas gives Warren Worthington, the high-flying Angel, a hint of some much-needed characterization as well. During one battle, Warren accuses Scott of hitting the winged mutant with his eye-beams on purpose; clearly, Scott made the attack only look like an accident when he really hoped to eliminate a potential rival for Jean’s affections. The plot point--a possibly rivalry between the two young men--is swiftly swept under the rug (Warren quickly blames his accusation on delirium), but the moment still stood out to me. Part of me was hoping for a full-blown rivalry to explode between the men (give Scott a chance to grow some backbone, for cryin’ out loud), but though the possibilities were quickly removed, I marveled that Thomas would at least introduce the concept. Warren goes on to aid the X-Men in other areas as well, proving himself as a more interesting character than previously.

Beast and Iceman (Hank McCoy and Bobby Drake, respectively) remain on the lower tiers when it comes to “character-defining moments.” Each of our five mutants, practically since the moment they were introduced, were sequestered into character molds--Scott was the uncertain leader, Warren the rich pretty boy, Hank the booksmart genius, Bobby the kid, and Jean the love interest. Of the five, Scott, Warren, and Jean have all been given opportunities to grow, primarily because of Thomas’ plotting. Not so the gregarious Beast and his frost-bitten buddy. Most times, Bobby and Hank are presented one of two ways: as superheroes, they remain surprisingly buddy-buddy and either work well together or jokingly get in each other’s way; as young men, they’re constantly ditching dates to play superhuman dress-up. For a writer who found a way to shake up the Jean/Scott dynamic, Thomas fails to spruce up Beast and Iceman. They’re basically the same characters we were introduced to from the start--gone, even, is Lee’s vaguely inserted idea that Bobby wishes to prove himself to his older teammates. Beast and Iceman still pal around and still ditch dates (why their girlfriends remain with them is a wonder). Some may argue the title needed some consistency, but were I to look at the breadth of Beast/Iceman scenes, I couldn’t tell them apart. 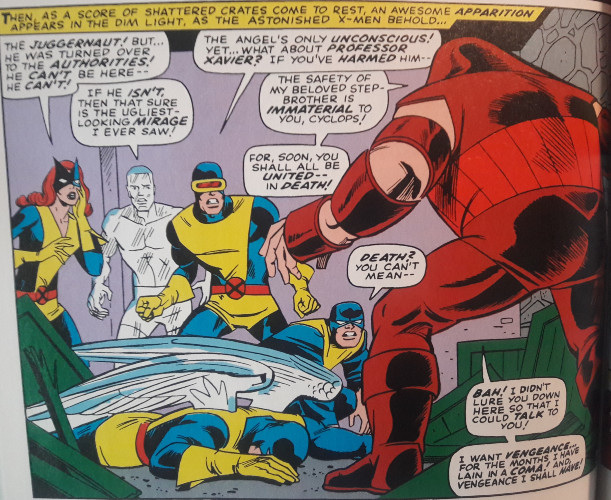 Thank goodness, then, for Gary Friedrich.

Starting with issue #38, backup strips are included which flesh out the origins of each X-Men (with the very odd exception of Marvel Girl--go figure that one). Starting with Cyclops, Friedrich offers some necessary information which has unfortunately been missing from the series the entire time. Friedrich’s telling of Cyclops’ formative days isn’t definitive (from what I can tell, there’s a whole “Cyclops and his brother falling out of a plane” sequence Claremont would later introduce), but that’s merely from a historical standpoint. Otherwise, Friedrich actually develops Cyclops, and later Iceman, surprisingly well in these strips. He inserts some of the “anti-mutant hysteria” Thomas’ stories have been lacking, reminding us that the X-Men aren’t just superheroes but tragic outsiders. Friedrich doesn’t go overboard with the tragedy, but he certainly wants us to empathize with our heroes. Cyclops is an orphan who, after averting a disaster, is chased out of town by a misunderstanding mob and falls into the hands of an evil mutant; Iceman is a young man who simply wants to keep his girlfriend safe, becoming a target for hateful local witch hunters when he uses his powers to protect her. Yeesh. 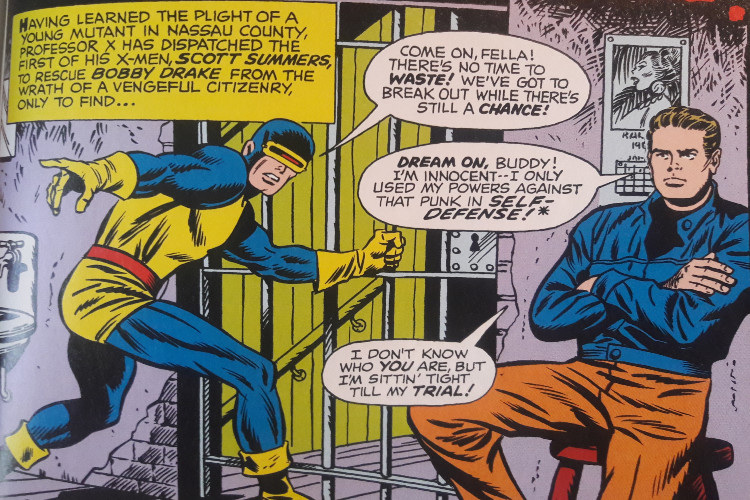 Nicely, Friedrich allows his strips to build on each other as he introduces characters. Cyclops has joined the X-Men by time Iceman’s tale begins, meaning it’s perfectly logical for Friedrich to have the laser-eyed mutant step in to rescue the frozen teenager when Bobby falls into a heap of trouble. Coherence and continuity exist between these smaller strips, providing nice diversions from the smaller stories being told. Professor X’s involvement is also nicely wound into these strips, as he starts off his mission of gathering young mutants he can train and guide. “The birth of the X-Men” some may call these strips, and though some pieces are missing (the lack of any Marvel Girl backstory whatsoever is a tad confounding), they feel needed and are a much appreciated addition to the issues.

This collection is certainly an improvement over the last installment, all things considered. I give much respect to Stan Lee and Jack Kirby for creating the X-Men, but Thomas takes their notions and runs with them in interesting directions. He does fumble the ball when he moves into generic sci-fi territory, but he balances out even mediocre stories with fantastic character moments and genuine change. When he gets his feet under him, Thomas possesses narrative balance and can walk a tightrope as fine as Hank McCoy can. Throw in the backup strips by Gary Friedrich, which give a few of our mutants the background and human aspects they were sorely missing, and you end up with a series that, in certain instances, improves upon the first stories and offers actual growth to a group predicated on the very idea of evolution and change.