This tome is more significant than it appears, introducing a powerful hero in some genuinely gripping narratives 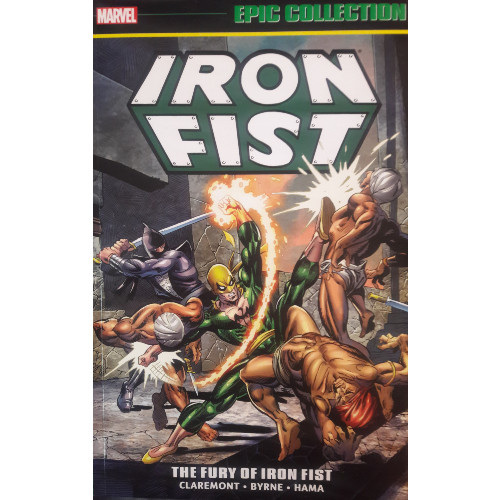 In the 70s, everybody was kung-fu fighting.

Well, probably not everybody, but Marvel Comics realized that they could capitalize on the kung-fu craze and started inventing characters to fit that mold. Two characters created during that time still exist prominently today--the Bruce Lee-inspired Shang Chi (who, if ya didn’t already know, will receive his own Marvel Cinematic Universe movie later this year) and the much more Western-influenced Iron Fist (who made his MCU debut a few years ago with a very mediocre Netflix series). Recently, after purchasing a volume containing the first half of the early 21st Century Immortal Iron Fist series (by Ed Brubaker and Matt Fraction), I decided to check out some of Danny Rand’s earlier appearances.

Fist’s first (and so far only) Epic Collection pulls together some introductory material and the martial arts master’s first series, giving a decent scope for the character’s early appearances. Known more prominently, perhaps, for his team-up book with Luke Cage, Heroes for Hire, Fist nevertheless deserves some attention in these first tales. They sculpt the hero’s path and set him up as a unique character in Marvel’s pantheon of colorful characters. 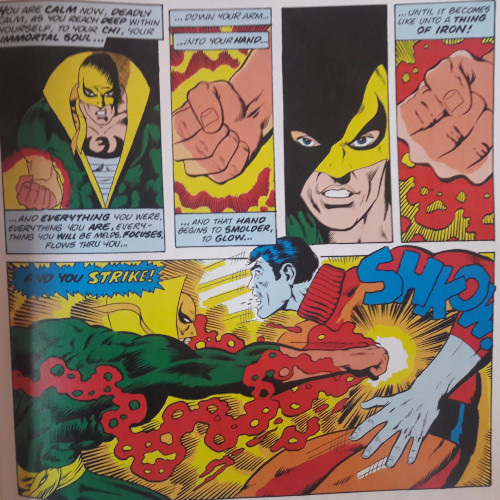 We have Chris Claremont and John Byrne to thank for the bulk of the stories reprinted in this collection, but the other creators assembled deserve mention as well. Roy Thomas and Gil Kane introduce readers to our main protagonist--young Danny Rand, inheritor of not only the Rand fortune but the powerful iron fist of K’un Lun as well. Over the first few Marvel Premiere issues, our varied word-sculptors and image-crafters each contribute to the Iron Fist mythos, fashioning a unique character in Danny. I’m not sure if the vision for the character, as introduced by Thomas, remained the same through the rest of Fist’s Marvel Premiere appearances, but the issues form a surprisingly coherent origin for our power-handed hero. Marvel Premiere (which we've seen before) was a book that "tested out" new characters, springing them on audiences and gauging their reaction to these original costumed creations before giving a character like Fist their own series.

After his father is murdered by a business associate while on a family expedition to the Himalayas (y’know, that kinda thing rich people do...the family expedition, not the whole murdering thing...though, on second thought, that happens too...), young Danny Rand is welcomed into the mystical city of K’un Lun, where he is trained for years in martial arts. After battling the dragon Shao Lao the Undying, Danny receives the power of the Iron Fist and heads back to New York when K’un Lun rematerializes back on Earth (which it can only do once every ten years). Fist’s story is laced with drama and revenge, and though these first issues are ridiculous, they weave a rather tight narrative. Danny is focused, determined, facing down any odds to get revenge on the man who murdered his father. The writers and artists, it seems, have a fairly good direction on where to take the series, keeping me interested the whole time. I followed Danny’s story, highly intrigued as it developed over each chapter; when one particularly important plot point seemingly wrapped up, I kept reading, invested in where our creators would take the hero next. 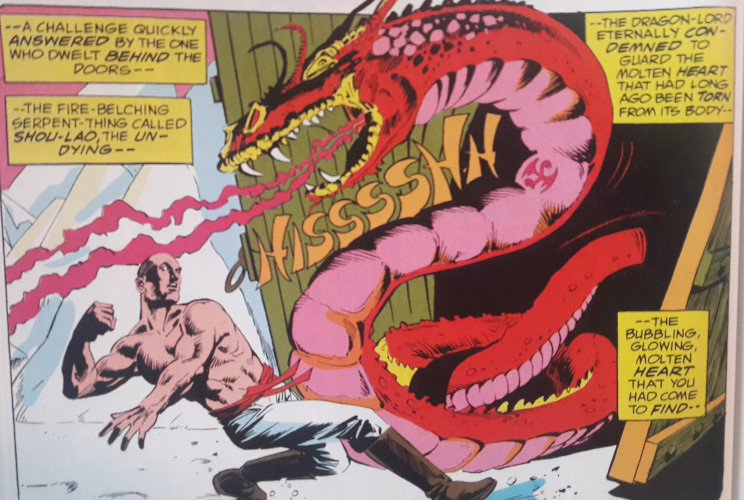 These first issues are surprisingly solid, if not a little out-there. The intention is to set Fist firmly within the “kung-fu mythos,” and though some have complained about the premise of Danny as a white man proficient in an ancient non-Western fighting style, the writers here are not intentionally trying to be disrespectful or rude to other cultures. Much like Stan Lee and Jack Kirby’s introduction of the Black Panther and Wakanda, the writers just seem ignorant about how to properly adopt an Eastern culture to Western civilization or to even ask the question of whether they should in the first place. And though the narrative’s direction is solidly laid out, getting from A to B remains a bit of an issue--the plot meanders from Iron Fist breaking into a skyscraper in a highly entertaining sequence to Danny battling a cult and Batroc the Leaper. He fights other martial art masters, a dude in a robotic suit, a ninja spirit possessing another man..solid premise aside, the Premiere issues feel otherwise slapdash, as if the writers weren’t 100% sure what they wanted to do and just threw whatever they could at the wall.

The question, once Fist becomes untethered from his prime motivation and becomes the eponymous star of his own series, becomes: what is Danny to do now? Chris Claremont and John Byrne step in to provide an answer. Danny, adrift in a sea of possibilities, becomes focused through Claremont and Byrne’s introduction of supporting cast members and plot developments which see Fist travel the world in search of a missing friend and foiling the machinations of a sinister, shadowy menace. Claremont’s narrative prowess is as strong as his writing on Uncanny X-Men--not only does he have a long-running arc in mind, but he plants subplots and character developments early on which show promise later. Particularly important are the revelations that Iron Fist's crime fighting partner/girlfriend Misty Knight has a robotic arm and that a mysterious figure is seemingly following Danny. These subplots introduce new character arcs and allow Misty and Fist’s ominous assailant to develop in the background, filling in the spaces between action sequences and giving the reader something to follow as the series progresses.

Claremont, too, delves into some of the more goofy plot elements, but he finds some surprising synergy in handling these story pieces. Fist fights a guy in a metal suit who’s later revealed to be composed largely of radiation, throwing in a little sci-fi action which could potentially feel largely at odds with the rest of the story. Yet, thanks to his writing prowess and the talents of John Byrne, the new villain feels meshed well within the story, written in seamlessly and not causing much of a break in the narrative. Claremont’s plot is woven particularly well, forming one, long-running arc over the fifteen issues he writes. Characters are introduced nicely, villains slip in and out of the darkness, secrets are uncovered, cameos entertain in between story beats (including appearances by Iron Man and Peter Parker, plus a few wonderful nods to X-Men, which Claremont and Byrne were working on together). Claremont seems to not necessarily have a definitive ending in mind as he writes each issue, but he makes up for that by interweaving story arcs in a way that keeps the story going at a rather steady pace over the fifteen issues. 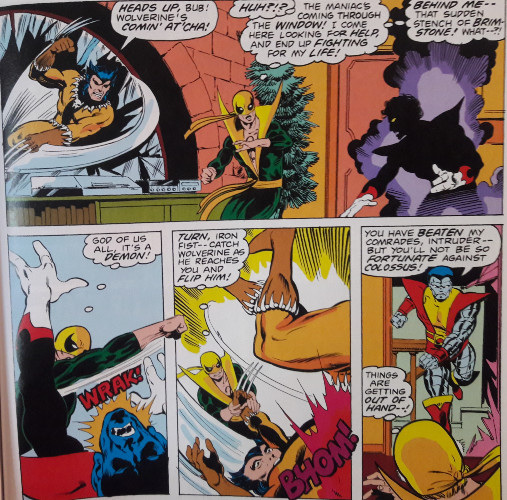 I was surprised, given my understanding of the character’s Netflix show, how little of “Danny Rand, rich kid” showed up in Fist’s comic series. The whole first season of Iron Fist, if I recall correctly, dealt with Danny’s return and his efforts involving his company. The Marvel Premiere writers certainly used the “rich kid” element as the basis of Danny’s origin, but once Fist returns to America, it serves little purpose. Claremont, part way through his series, seems to suddenly remember that aspect and toys with it a little, introducing a subplot where Danny briefly seeks to reclaim his fortune, but this is dropped shortly thereafter. It seems like the obvious “rich guy who fights criminals with martial arts” parallel to Batman lingers ever so slightly; maybe the creators didn’t want to have a similar concept with Danny, at least not at this specific moment.

As the series winds down, Claremont loses a little steam, particularly when his larger, focused story arc wraps up. The last handful of issues feel more scattered and standalone--Danny fights the X-Men, breaks into Avengers mansion, battles Sabretooth (who, despite his prominence as a Wolverine villain, debuts here in Iron Fist’s series), and takes out a gang of Chinatown hoods. The premises aren’t as strong, and Claremont seems to want to just take his time, go issue-by-issue for his last couple of months on the title. Each issue is entertaining on its own--the Iron Fist/Sabretooth fight in particular is a treat, especially considering what the mutant villain would go on to become, as is the Fist/X-Men showdown. Yet the series ends on a bit of a “pft,” as if Iron Fist’s iron fist suddenly lost its power. Claremont has to wrap up some dangling plot threads in Marvel-Team Up, and though these issues complete his story totally, I would have preferred seeing them completed in Fist’s regular series. But who knows? Maybe that was Claremont’s plan the entire time, and the series just got cancelled before he could finish his narrative. 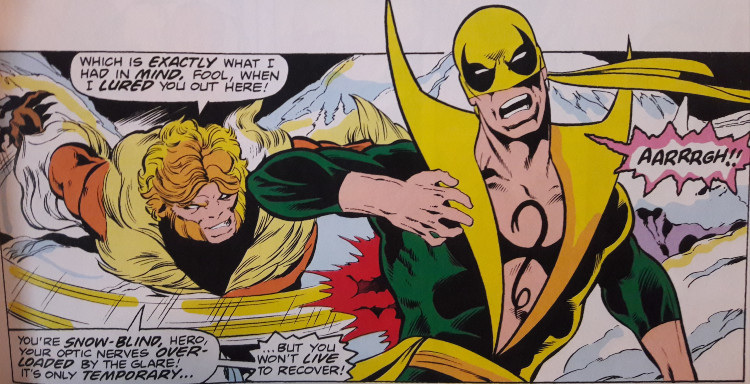 “Like unto a thing of iron!” captions declare as Danny charges up his powered fist, his hand crackling with energy ready to be unleashed upon an unfortunate foe. The phrase, which could become repetitive, instead serves as a mantra. The image of Danny’s energized hand, which could become plot convenience, instead serves as a symbol of his power, focus, determination, and dedication. Heading into this Epic Collection, I wasn’t prepared to enjoy this as much as I ended up liking it. As I said, Claremont and Byrne deserve most of the praise. Several writers and artists worked to invent the Iron Fist, but Claremont and Byrne take him from “just another guy who knows kung-fu” and turn him into a more realized hero. With well-woven plots, fantastic art, and Claremont’s strong sense of character and dialogue, this volume stands like unto a thing of iron itself...strong and resilient...just don’t expect to learn any actual kung-fu from it.