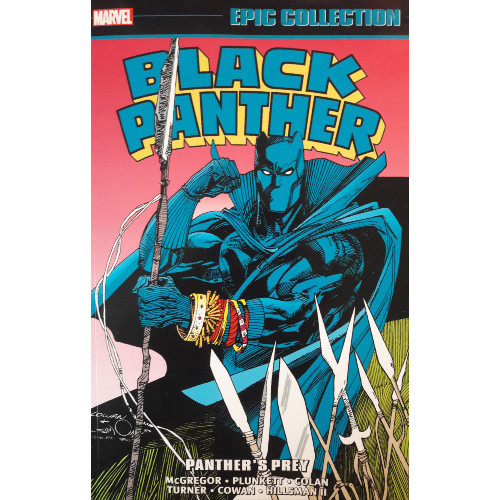 We have journeyed through the jungles of Wakanda, through the snow-capped mountains of her farthest reaches and through the desolate swamps of her lowest lands. Our time with the Black Panther has seen him traveling beyond his home’s borders to America and other lands beyond, as superhero and treasure hunter, of all things. Panther has battled threats from within, toppling would-be despots and asserting his claim to not only the Black Panther title but the throne of the nation he rules. T’Challa has seen loss, felt pain, and battled evil in all forms.

Guy could use a bit of a break, right?

This Epic Collection sees T’Challa thrown into the thick of things as he faces some of the most personal conflicts of his career. Our old friend Don McGregor returns to script two of the larger arcs contained within this volume; has McGregor’s skills waned over the years? Or does his style retain the same biting wit and adroit affection for the Wakandan king that he espoused in 1973? 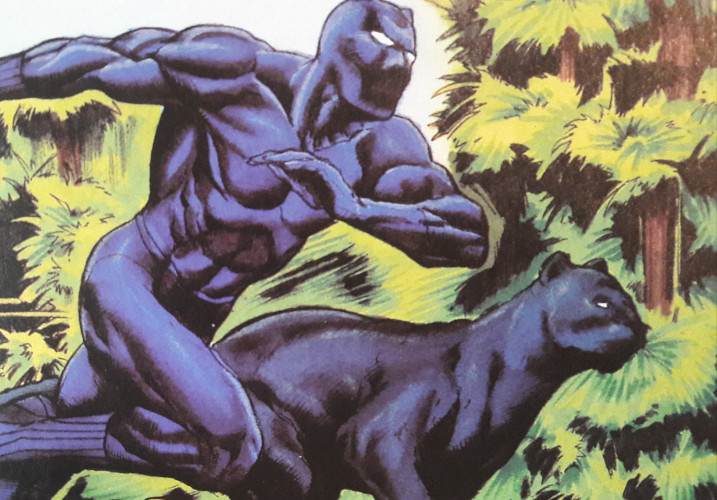 McGregor’s return is a highly welcome one for me, particularly as I had grown so fond of his famed “Panther’s Rage” arc while reading Panther's first Epic Collection. McGregor's style is poetic, his narrative structure engaging. He plunged T’Challa into the heart of a brutal civil war, forcing the king to confront various enemies, including the elements themselves, as he struggled to reclaim peace for Wakanda.

That same control of T’Challa’s character remains staunchly in McGregor’s grasp as he weaves two titanic tales for this third volume--“Panther’s Quest” in the pages of Marvel Premiere, and Panther’s Prey in its own, four-issue series. Both stories feel like spiritual sequels to “Panther’s Rage,” down to the parallels in the titles. McGregor returns to a character who has been shaped by other writers since his previous work, most notably Jack Kirby and Peter B. Gilis, and while McGregor is by no means derogatory to other creators, he merely shrugs off their contributions. As you enter “Panther’s Quest,” you find that T’Challa feels largely untouched by other pencils and inks. It’s as if the character has been suspended in timeliness between the ending of “Rage” and the start of “Quest.” 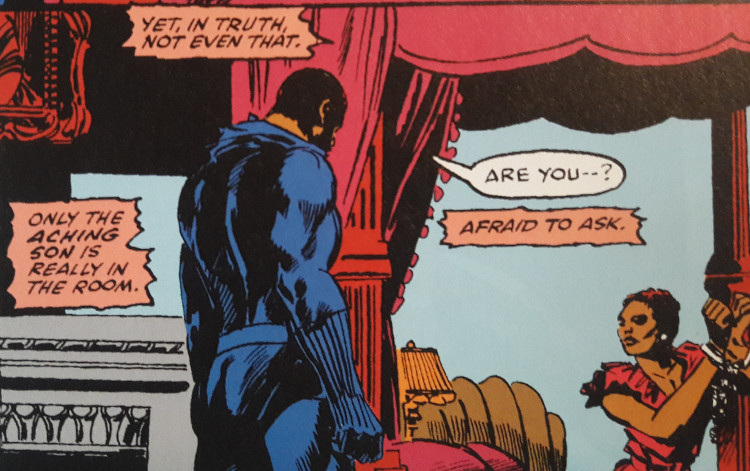 “Quest” and Prey are alike in that they feel overwhelmingly personal. T’Challa doesn’t become involved in racial tensions and threats to his kingdom for simply obligatory reasons. “Quest” sees T’Challa venture to South Africa, becoming embroiled in those racial tensions as a consequence of his real intentions: rescue his mother from the hands of a white supremacist maniac. Prey focuses deeply on T’Challa estranged relationship with Monica Lynn, a young woman McGregor used prominently in “Rage,” even as T’Challa combats a superpowered villain seeking his death. McGregor wraps each basic superhero plot in another layer of depth and emotion, particularly as T’Challa struggles through his feelings for both women. His mother Ramonda has been missing for years, and though this plot point was never touched on by previous writers, McGregor introduces the concept of "T'Challa's missing mother" seamlessly. Reading “Quest,” I never felt disgruntled that T’Challa was venturing out to save a mother readers had never heard of before. Part of this may be because the character’s appearance in the MCU’s Black Panther film already familiarized me with Ramonda, meaning the “twist” of his mother’s existence felt easier to swallow. Additionally, McGregor brings Ramonda back for Prey, a good nod to his previous work and a continuation of what he started in Marvel Comics Presents.

At moments, McGregor’s treatment of the Panther can feel a little “same old, same old.” Much of the brilliance of “Panther’s Rage” came from how staunch McGregor made T’Challa. The man is unstoppable, a noble monarch who would move heaven and earth to rescue his people. There was no obstacle he wouldn’t overcome, no threat he wouldn’t confront, no injury he wouldn’t shrug off to bring Killmonger and his hordes down. T’Challa is, similarly, put through the physical and emotional wringers a twice and third time in these other tales. The man is beaten and bruised, shot at and scarred, yet never wavers from his objectives. At times, McGregor seems to push his superhuman confidence to unbelievable levels, but the storyteller weaves in so many brilliant action sequences, you practically forgive the seeming repetition rather quickly. 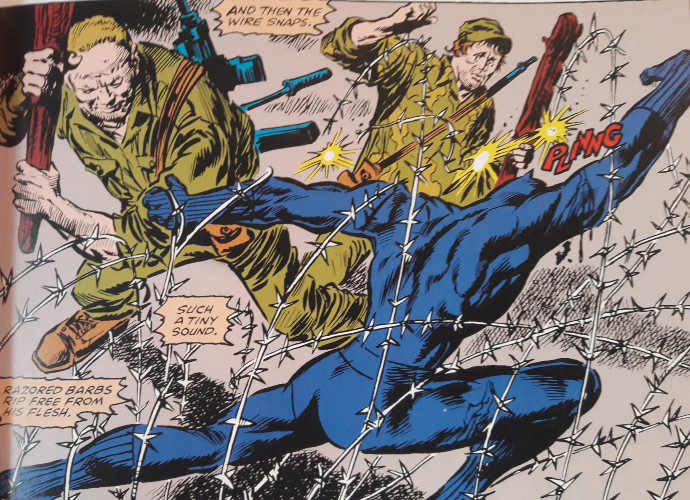 McGregor’s partners-in-crime on each story, classic Daredevil penciler Gene Colan on “Quest” and Dwayne Turner on Prey, churn out artwork that complements the narratives perfectly. Colan hasn’t lost his touch since his days on DD, perhaps becoming more detailed as he has the Panther face down thugs, rioters, military mercenaries, and a host of other dangers including barbed wire, attack dogs, fire, a bear trap, and tanks as he takes steps closer to his missing mother. Turner’s gorgeous, almost painted artwork gives Prey the fluidity it deserves, delivering almost other-worldly views of villains and creatures balanced out with his wonderful designs of Wakanda’s technology and architecture. McGregor is not afraid to take T’Challa to darker places, and his artists respond in kind. Yet, McGregor never goes overboard or delivers anything unwarranted or too grim. The darkness intends to push T’Challa to his limits as king, forcing the monarch to act and react accordingly.

Cast members from “Rage” are welcome returns, and McGregor uses his cast as excellently as he did in his first Panther arc. Again, McGregor’s use of his characters, like his story, effortlessly bridges the decades between “Rage” and these two tales, meaning you could almost read them back-to-back and not have missed out on much of anything in the intervening years. That isn’t to say other writers failed to create meaningful stories for T’Challa or push him in exciting directions (he was an Avenger for years, for Bast’s sake); it’s less reproaching writers like Kirby and Hannigan and more praising how effortlessly McGregor slips back into Wakanda after all his time spent away. Former girlfriend Monica Lynn is given an entertaining arc as McGregor explores what may have happened to her following “Rage.” Other villains and friends pop up here and there, giving fans tethers to hold onto as they return to Wakanda with McGregor (bodyguard W’Kabi, who lost a hand in “Rage,” is given an exceptional arc as he struggles with his new metallic appendage and all the emotions which come with conforming to his weaponized prosthetic). His three stories, though each distinct, certainly provide a trilogy of sorts, even if it largely exists in the imagination of the writer. 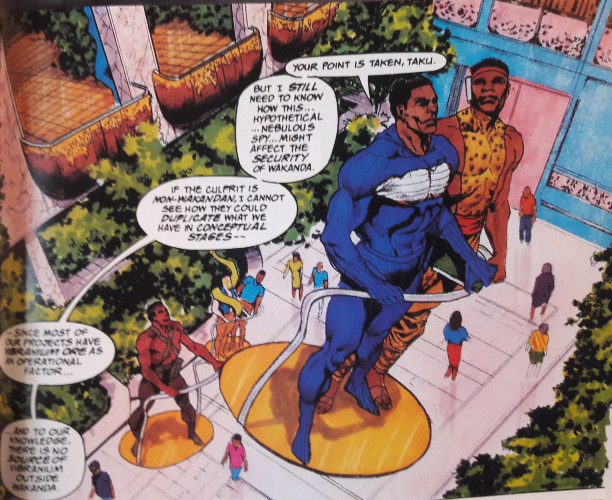 I mentioned, in my post on Panther's second Epic Collection, how Jack Kirby transformed Wakanda into a land that felt lived in. McGregor seems to take what Kirby crafted and push it even farther, particularly with Prey. Largely thanks to to Turner's painted illustrations, Panther's home country is gorgeously depicted, a 2-D reflection of a wide world and a blend of the archaic and new. Panther can spend one page leaping from tree branch to branch; the next, he's eating the latest Western introduction to his realm: pizza. The technologically advanced society feels real and almost tangible under Turner's pen, particularly in how wonderfully Turner fills his pages with Wakanda's technology. Together, McGregor and Turner imagine a whole world for the mighty monarch, a world he guards jealously.

Included in this volume are some other Panther-centric tales, a handful of standalone stories which feel disconnected from the framework of other narratives. Each story is short, wrapped up in a handful of pages. On their own, they represent certain engaging ideas--an angry advisor seeking to foment rebellion against T’Challa, a demon the Black Panther is required to fight once a decade, a new “origin” for Ulysses Klaue’ hatred towards the Panther lineage (retconning the original Lee/Kirby narrative)--but they all feel stuck in their own little bubbles. None add much to the collection as a whole. Again, some of the ideas are interesting, but none of them fascinate in the same way as McGregor’s arcs. Yeah, it’s cool knowing the Panther has to ritualistically fight a demon once every ten years, but has anyone used the idea since? And maybe it’s interesting reading a story about Ulysses’ dad and his own forays into Wakanda, but the moment T’Challa’s grandfather rips a metal arm from Daddy Klaue, the ridiculously obvious parallels between Klaue and Klaue Jr. (who comic fans know sports a metal arm of his own) become too far-fetched to be entertaining. 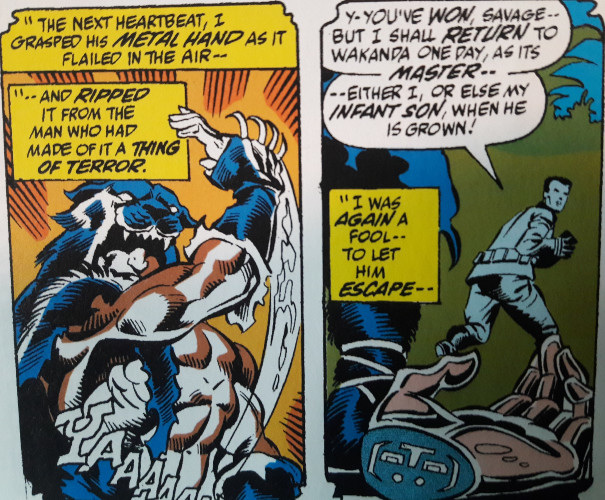 When McGregor’s in charge, this volume is every bit as good as the first Epic Collection. Other writers just can’t match his wonderful writing, his grand characters, his tight plotting. Wakanda is allowed to expand and grow in these tales, as does T’Challa’s influence, cast, and notions of the world around him. The additional tales aren’t as exciting or necessary; if anything, they certainly makes this volume feel more “complete” for those fans looking for all or most of T’Challa’s significant appearances within the two years collected in this trade.