This small volume is a great lead-in to Infinity Gauntlet, even if it offers imbalanced characterization of a certain Mad Titan 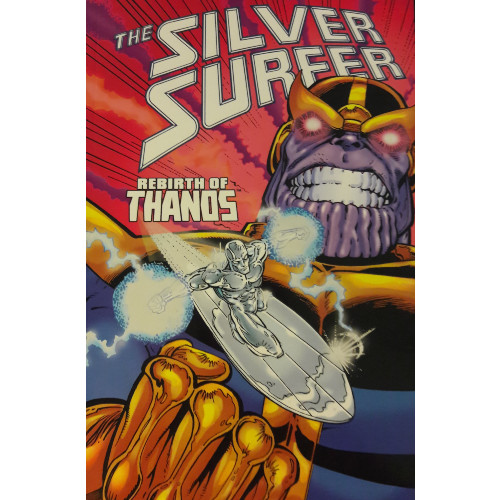 Thanos, the Mad Titan, worshiper of Death incarnate, was dead.

During a fantastic clash with the Avengers, the purple-hued razer of worlds was stymied by a glowing Adam Warlock–temporarily freed from his Soul Gem, Warlock promptly turned the Titan to stone. So Thanos wasn’t dead…not in the traditional sense…but he was a pawn removed, seemingly forever, from the chess board of life…perhaps situated in some state of “un-life” where he could not live yet not truly die. Frozen, forever away from the arms of Death, the deity he loved.

Oh, he popped up at least once after that point, in a dream belonging to Captain Mar-Vell before that hero himself succumbed to death. But the threat of Thanos, thanks to Adam Warlock, was seemingly extinguished for eternity.

Too bad Death had other plans.

This is my third and final “Infinity Prelude” post. I’ve addressed a few stories leading up to Jim Starlin’s impressive limited series before I tackle that narrative for “Spider-view.” We’ve leapt across decades to reach this point, and now we find ourselves firmly in the 90s. Aside from that minor “Death of Captain Marvel” appearance, Thanos has been silent since 1977.

But as fans of the MCU know, Marvel’s hulking version of McDonald’s Grimace is inevitable. And inevitability never sleeps for long. 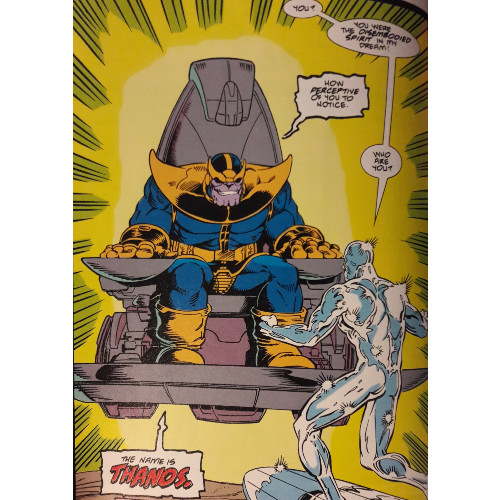 There are other ways to nab these issues–a couple Epic Collections, in fact, gather all the Infinity Gauntlet-era Silver Surfer issues should you wish to peruse them–but this small trade is by far the cheapest option. I didn’t even pick this volume up for the Silver Surfer issues, however, but for the two-issue Thanos Quest limited series tacked onto the second half of the volume.

A small Infinity Gauntlet spoiler, if I may: for anyone picking up that series in isolation, you will find yourself dumped headlong into the middle of a story. Gauntlet picks up in medias res, which may be shocking for any fan inspired by the MCU to read the series for the first time. The tale opens with the Mad Titan already in possession of the titular McGuffin, with the demon Mephisto at his side, mere pages away from snuffing out half of all life in the universe.

As I approached Starlin’s Infinity Gauntlet series, those images stood out in my brain; from what I recall, Thanos’ clicking fingers initially propelled my curiosity to explore prior-Gauntlet arcs. I am a completionist. I enjoy having all the pieces of a possible story together (as all tales should be) to get the most enjoyment out of an entire arc. If I can grab an entire series in a single volume, awesome. I’ve often found myself picking up prequels and sequels or tie-ins to certain events just to better understand the whole scope of the narrative told. In this instance, I wanted to discover how our purple-faced fiend hunted down the Gems...and did a little hunting of my own to find the answers. 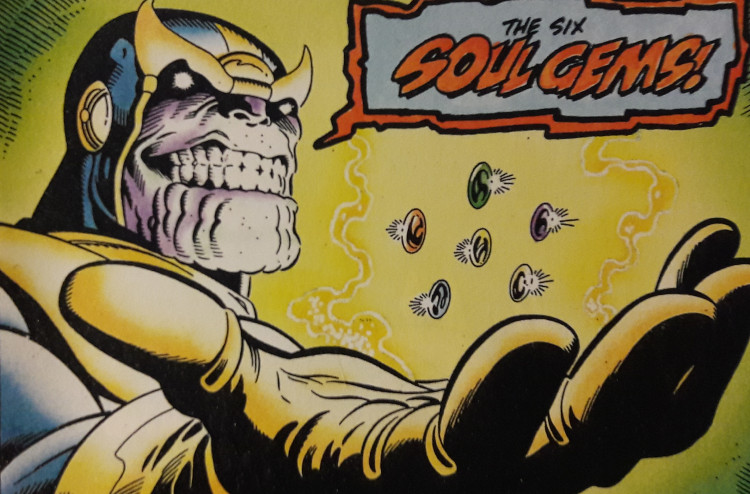 I’ve admitted in previous posts that I don’t know the scope with which Jim Starlin was writing the cosmic side of Marvel. When he initially introduced Thanos in Iron Man #55, did he have an overarching plot for the villain? When he brought the Avengers and Warlock together to wage war against Thanos’ first scheme using the Soul Gems, did he have the seeds for Infinity Gauntlet in mind? I don’t know. In these Silver Surfer issues, however, the Mad Titan’s greatest scheme starts becoming apparent. Resurrected by Death herself, Thanos embarks on his wildest, maddest plot, driven by his love for his beloved dark deity.

What I had not realized prior to this volume was that, before Thanos’ resurrection, the Surfer had never met the Titan. I suppose, with Mar-Vell dead and Warlock believed so, the Surfer was a logical choice to face the newly-resurrected demigod. By creating a new adversary for Thanos, Starlin expands the villain’s scope and, as Infinity Gauntlet would show, proves his mettle against the cosmic surfboarder, dude. Surfer, for his part, is as meandering-ly philosophical as Stan Lee made him, yet the threat of Thanos offers him new focus: he becomes convinced of Thanos’ menace against the universe and stands against him, engaging in a quest to stop him as dedicated as Mar-Vell and Warlock’s ever were. Of all Marvel’s titles, the Surfer’s seems the most appropriate to seed Thanos’ darkest plan. 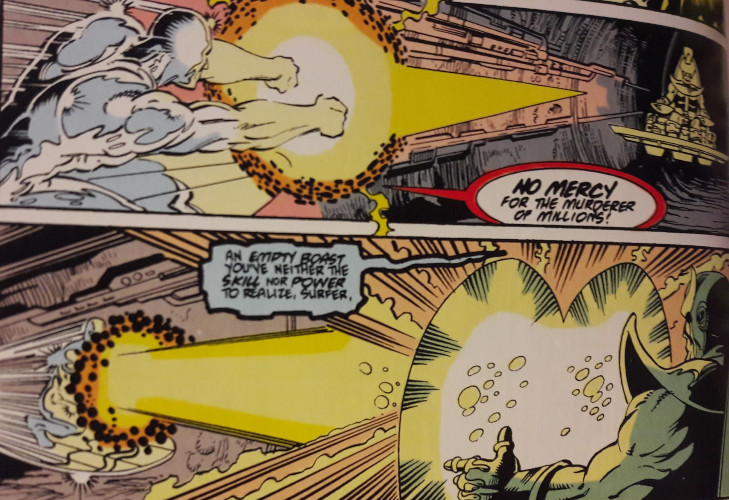 All the Surfer issues tether into the build-up to Infinity Gauntlet, some more strongly than others. Starlin’s characterization of Thanos, particularly immediately after he encounters Surfer, feels a little different than in prior stories. Thanos’ justification for his burgeoning “wipe out half the universe” plot becomes enmeshed with environmental rhetoric, with Thanos showing the Surfer scenes of planets burdened by overpopulation. Thanos’ shift in intentions is a sudden departure from Starlin’s past portrayal, where the Mad Titan was filled with love for Death.

It seems, in moments, Starlin intends for Thanos to perceive himself as a great equalizer–he’s not so much concerned for the welfare of peoples and planets as he is disappointed with the amount of life in the universe. If populations continue expanding at a rapid rate, isn’t life winning against death? Where’s the balance there? This notion is teased through dialogue, yet not teased well enough. Thanos does not come across as some zealous knight, riding and fighting for Death’s cause, to increase her “kingdom” or offer her a tribute, as he attempted in previous stories and will attempt in Infinity Gauntlet. Perhaps Starlin intended for Thanos to win Surfer over with an appeal to reason, to allow the Mad Titan to present himself as a misunderstood anti-hero. The whole argument fails, however, as this new dimension to Thanos’ personality, whether legitimate on Starlin’s part or intentionally manipulative on Thanos’, is but a brief separation from Thanos’ past motivations. It contrasts how we've viewed the villain previously, and Starlin does not make Thanos' motivations clear enough to make me believe the writer was doing anything other than tapping into popular subject matter. 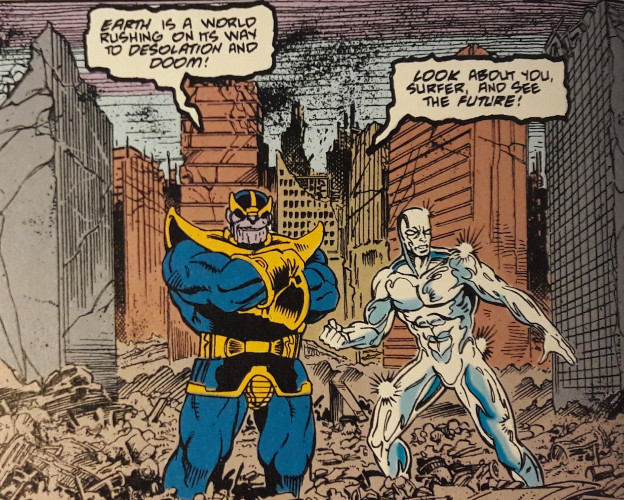 Starlin uses the issues as a way to reconnect with various cast members–Eros and Mentor of Titan, as well as Drax the Destroyer, whose intelligence has sharply decreased. Simply because of the issues collected, I do feel as if I am missing a few pieces of individual narratives, particularly explaining what happened to Drax. Last I saw him, he was trying to get to Thanos through Gamora and was, seemingly, still capable of intelligible speech. Here, he’s more like his future Guardian of the Galaxy Groot, demanding “Where’s Thanos?” repeatedly and punching whoever gets in his way. Again, his scuffle with the Surfer serves to draw the chrome-colored cosmic caretaker deeper into Starlin’s world, as the highly-confused Surfer begins to learn just all what’s going on.

I suppose, in a way, this is Starlin’s biggest theme as he ratchets up to his primary confrontation. His heroes–Mar-Vell, Adam Warlock, and Surfer–are all wandering misfits, men searching for purpose and identity. Mar-Vell was a traitor to the Kree who found new purpose on Earth, Warlock a Christ-like figure who eventually left his home of Counter-Earth, and the Surfer a former herald of Galactus who turned on his master. All three are prone to philosophical exposition regarding their place in the universe. With Surfer, Starlin works with a much more established character than Mar-Vell or Warlock; he directs Surfer differently, offering him a specific purpose and conflict to become embroiled in than radically or fundamentally altering Surfer’s character or backstory. The insertion of cast members such as Eros, Mentor, Drax, and Thanos feels organic, tethered to Starlin’s prior narratives and used as connections to draw Surfer into this cosmic conflict against Thanos.

The Mad Titan himself takes center stage in the two-part Thanos Quest limited series, which I mentioned was my impetus for purchasing this volume. Quest sees Thanos engaged in hunting the six Soul Gems, rebranded as the Infinity Gems here. Though Starlin had used the Gems previously, Quest appears to be the first time each Gem was given its own identity and ability–Time, Space, Reality, Soul, Power, and Mind–thus distinguishing them individually and collectively from how Starlin has portrayed them in the past. Granting each Gem its own control over a facet of the universe actually catapults Thanos’ threat to existence itself and allows the villain a decent opportunity to grow. There’s a sense Thanos now realizes the true, collective potential of the Gems, and he intends on wielding them to finally win over Death.

The series is, outside of Warlock and before Gauntlet, Thanos’ most compelling appearance. He is, by sheer definition, the protagonist of the story–this is his quest, his journey to attain the Gems. You voyage with him across the galaxy, delve deep into his ponderings and motivations, and learn what truly drives the Mad Titan. This is yet another reason I find the motivations Starlin gives Thanos in the early Surfer issues spurious, or at the very least, poorly communicated. Nowhere in Quest does Thanos remark on environmental or population concerns or express himself as an agent of Death beyond trying to win her over. His will and desires are driven by pure selfishness and obsession. 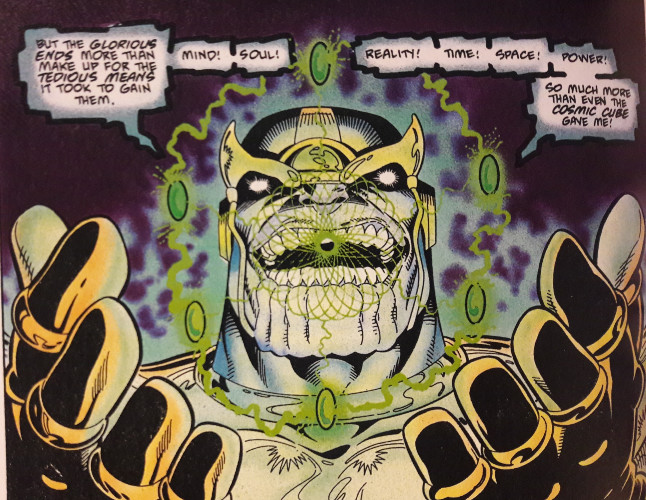 Starlin weaves a dreaded tale of greed and personal fanaticism through Thanos, as the Mad Titan single-handedly defeats or tricks various Elders of the Universe and plucks their Gems from them. The Champion, the Collector, the Grandmaster, the Runner, the In-Betweener, and the Gardener all find themselves on the receiving end of Thanos’ madness. Starlin’s Thanos is both mentally manipulative and powerfully brutal, "persuading" his foes through sheer force of will or deception. Thanos, touted often as a master strategist, proves himself in these two issues, setting himself up for godhood.

Ron Lim provides stellar (no pun intended) penciling throughout the book, yet he absolutely shines (again, no pun intended) through this two-issue series. Starlin allows him wonderful control over the narrative, with smaller, personal moments balanced beautifully with half- or full-page shots of characters, combat, and cosmic devastation. He works well with Jon Beatty’s inks and Tom Vincent’s colors to make Quest feel like a premiere title, not just another random selection of issues you’d pick up. There’s a seriousness and care crafted into the series to make this Infinity Gauntlet lead-in feel appropriately impactful. 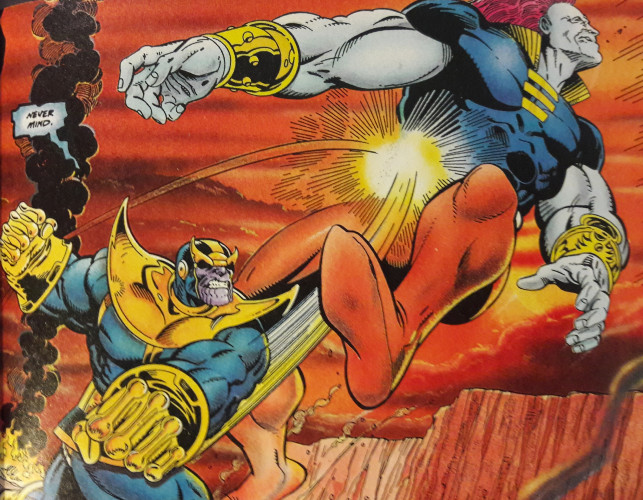 Come for the Surfer, if you must, but do yourself a favor and stay for the Thanos Quest. The Silver Surfer issues are properly dramatic as Starlin nears his explosive series, but the limited selection provided in this volume means you’ll want to look elsewhere, specifically in a few Epic Collections, if you want Surfer’s whole Gauntlet run. It’s truly the Thanos Quest which serves as the highlight for this volume, detailing a terrifying Titan’s efforts at claiming godhood, letting nothing intervene in his highly personal and dark hunt. Thanos’ pursuit for the Infinity Gems elevates his menace even before he clicks his fingers–the dude takes on several Elders of the Universe!–and proves, if Starlin’s previous stories haven’t already, the type of intergalactic threat Thanos poses every time he appears on page.