Nick Spencer's Ant-Man is replete with humor and humanity, carrying a big impact through its small main character 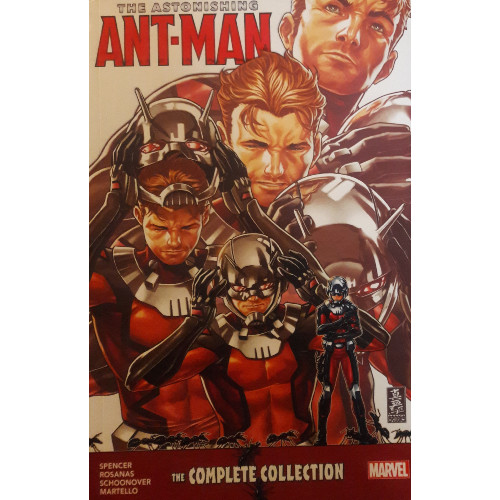 Scott Lang’s not such a bad guy. Not really.

Sure, he used to be a master thief who stole stuff and landed himself in jail, screwing up his marriage and temporarily alienating himself from his daughter. But he’s come a long way since then! He became the second Ant-Man! He saved his daughter, Cassie, from the clutches of Darren Cross! He’s been an Avenger and a member of the Future Foundation!

What’s that? He only became Ant-Man after stealing the suit from the previous antennae-adorned hero, Hank Pym? He was unceremoniously killed when Jack-of-Hearts exploded during Avengers: Disassembled? He’s a divorced ex-con unable to hold down a full-time job because of his checkered past? And he brands himself after an insect most well-known for invading picnics and annoyingly getting into your homes? Well, c’mon, nobody’s perfect!

So Scott’s got a few issues to work through. Who doesn’t? Across a couple of limited series, the man who tried making Boomerang cool and turned Captain America into a “Hail Hydra”-ing fascist brought his own spin to the Ant-Man mythos (if such a term can be applied). Nick Spencer’s run on Scott’s life is a highlight for the character’s history and, surprisingly, takes a guy who can shrink to the size of your thumb and makes him bigger than he’s ever been.

The Astonishing Ant-Man: The Complete Collection 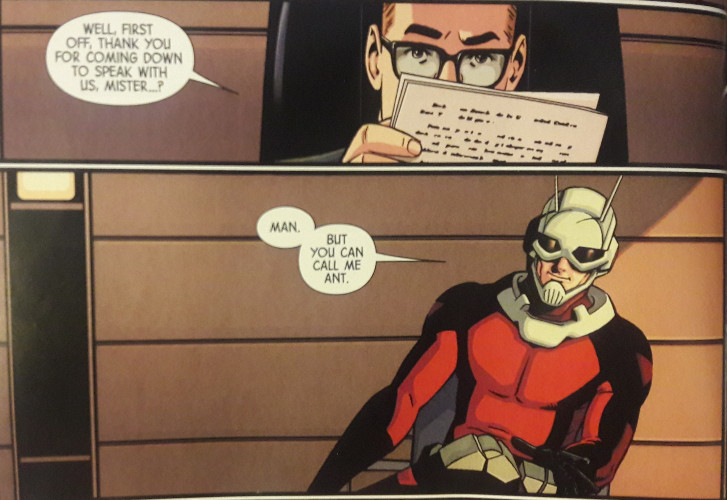 At some point, it hits you like a Mack truck. This whole adulting, nine-to-five thing really takes a lot out of you. Perhaps it’s because I’m relatively new to the “system,” only shortly removed from the realm of undergraduate academia, but I feel like I’m still getting my bearings and haven’t come close to experiencing the breadth of experience and responsibility that comes with being a full-grown human being. Work. Bills. Schedules. Friends. Family. A horde of other tasks and expectations to try and juggle. Heck, I only just bought my first car a few weeks ago. It’s a lot, right?

Back when Stan Lee and Steve Ditko created Spider-Man, they envisioned a character who was a teenager first, superhero second. This meant Peter Parker struggled with his aunt’s failing health and maintaining good grades just as often as he crossed proverbial swords with the Rhino, Shocker, or the Scorpion. Spencer offers a similar experience for audiences reading his Ant-Man run, except Lang has gotten a bit more “life experience” under his belt…plus some “prison life experience.” Here’s a guy who’s already been through quite a bit in his career since his creation a few decades earlier (including, as we recently saw, accidentally (ant-cidentally?) shrinking our good buddy Spidey to ant-like proportions). An ex-wife who remarried a cop. A teenage daughter who used to be a superhero (and lost her abilities after she died and was resurrected…which happened shortly after Scott himself was resurrected). A past dotted with broken relationships and attempts at personal salvation and professional salvaging. Spencer uses all of it to paint a picture of a man who doesn’t fit the “superhuman” mold as much as he fits the “human” image. 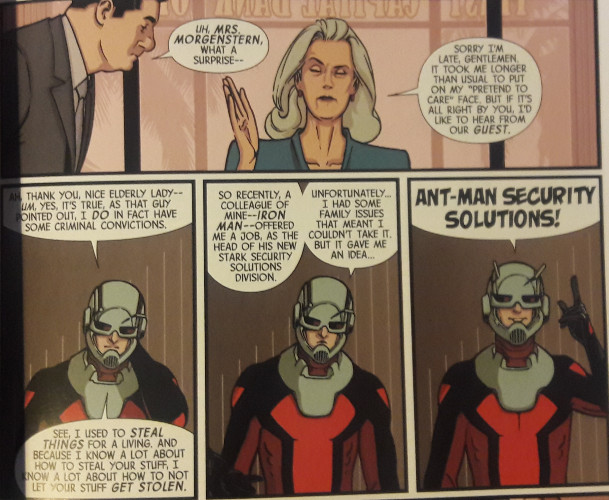 At his core, Scott Lang isn’t the kind of guy you’d picture as the perfect superhero, and Spencer latches onto this idea fiercely. Scott’s a screw-up to the point where even some of his well-intentioned, genuinely kind ideas either backfire or end up perceived the wrong way by the outside world. Spencer takes a long gaze at the character’s past and brings to the fore how broken and jumbled it really is, emphasizing the emotional weight of bad decisions or good decisions gone wrong.

At the start of the run, Lang already has to work his way up a mountain of poor familial relationships and low public perception. The idea is, admittedly, not new to the genre or to Marvel comics characters. Spider-Man has long been hated by the general public, as have been mutants. The Hulk transforms into a one-man mountain of an army who’s subsequently hunted by the real military. At the root of each Marvel character is a flaw. 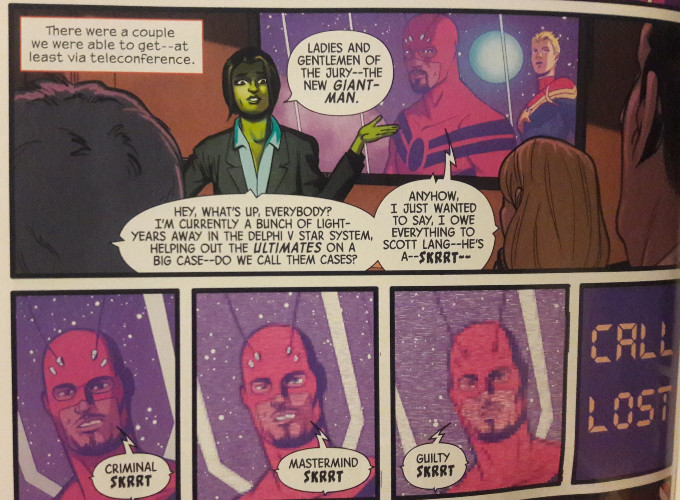 Yet Scott Lang’s situation is interesting: his problems are largely self-inflicted. The past that haunts him is of his own devising. He chose to steal his way through life; he even pilfered the Ant-Man suit. Spencer drives home this idea wonderfully. His take on Scott isn’t completely focused through the lens of awful decision-making--Scott is, at his core, just trying to be a good hero and, hopefully and with no little amount of luck, an even better dad. But those past choices have a nasty way of creeping up on him. As Scott tries to start his own business and get his feet under him, the man finds his footing consistently hampered by his own past. A rocky relationship with his ex-wife and daughter is constantly threatened by the perception that he’s unable or unwilling to change. Potential current romantic interests, like a burgeoning relationship with superhero-turned-drama-star Darla Deering, are hindered by poor choices. There’s certainly an emphasis on Scott’s troubled days, and while I’m uncertain if previous writers intentionally layered Scott’s past with bad decisions and slip-ups, I appreciate how well Spencer integrates the guy's history. 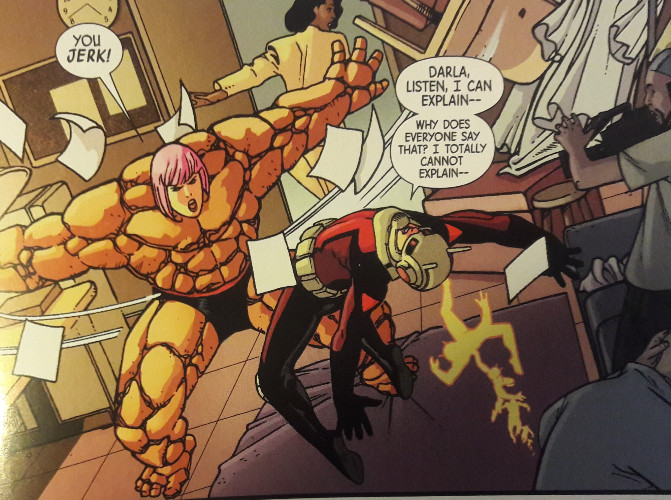 Surprisingly, Spencer works in the past seamlessly. You’ve never had to read an Ant-Man comic to know what’s going on. Spencer finds a really fluid mesh between the past and present--his flashbacks or references to past stories are well-written, keeping his writing from becoming stodgy or weighed down by exposition. And the present stories may be heavily predicated on the past, but they feel important and are given the narrative weight they deserve. While certain narrative strands may seem a tad repetitive--Spencer has Darren Cross kidnap Scott’s daughter a second time, much like in Scott’s original appearance--they don’t feel dull or undeserving of attention. Spencer doesn’t go back to the well one too many times because he’s run out of ideas; he simply sees new ways of perceiving and interpreting older concepts, and if he can tell his own story or share his own ideas through older material, great. The kidnapping plot, which was originally used to establish Scott’s role as a hero, is tethered more strongly to his relationship with Cassie this time around. Other references to the past keep you updated on Scott’s history and pave the way to what Spencer has planned--it’s important to know Cassie died and lost her powers to understand where the character is in the present.

Cassie becomes one of Spencer’s most important characters, second only to her father. Spencer deeply focuses on her and Scott’s relationship. As Scott learns to (mostly properly) handle this whole adult/father/business owner deal, Cassie navigates rough waters on her own. A whole issue is dedicated to her wrestling with her lost powers, seeing her sneak out and engage in some dangerous dueling with some Secret Empire associates (no connection, I believe, to Spencer’s series of the same name...hurk!). Spencer juggles a lot of emotion between the two characters in this series, ranging from Cassie’s resistance to Scott’s seemingly overprotectiveness to Scott’s own frustrations with some of his daughter’s choices. Occasionally, Spencer’s character work feels a tad shallow, with problems between the two stemming from some minor misconceptions. A few moments feel like they would be solved by a simple conversation between a father and his daughter, meaning that a couple of conflicts used to ratchet up the Scott/Cassie tensions seem as if Spencer makes mountains out of ant hills. Otherwise, their relationship is a core characteristic to the series. I couldn’t tell you how other writers handle the dynamic, but Spencer puts a lot of effort into making it work. 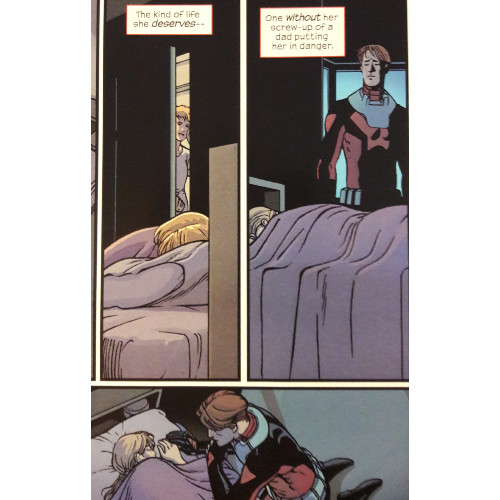 Perhaps the most wonderful aspect of the series, outside the engaging characterization, is seeing how much fun Spencer is having at crafting different ideas and toying with the societal aspects. Unlike his Captain America run, (which was written at the same time as this series) Spencer capably interjects social critiques in an engaging yet playful sort of way. A background plot sees different villains creating supervillain apps--“Hench” and “Lackey”--which hire out villainous henchmen instead of taxis or food. Spencer toys with the idea in a very entertaining way, remarking on society’s use of technology to fix problems. Ant-Man’s first hires are villains themselves, Grizzly and Machinesmith, with the latter injecting his thoughts on the corporate structure as he lists various problems with current employer/employee relations.

Spencer, again, is using a series to comment on society, but his points feel less forced or burdensome than they did during his Captain America stint. Remembering the little of his Captain America run that I read, I recalled a heavy-handed series which seemed more interested in being political than engaging. Here, Spencer tells a grand story, his message mostly hinted at. He leaves the reader to draw their own conclusions instead of beating them over the head with how he believes they should feel. 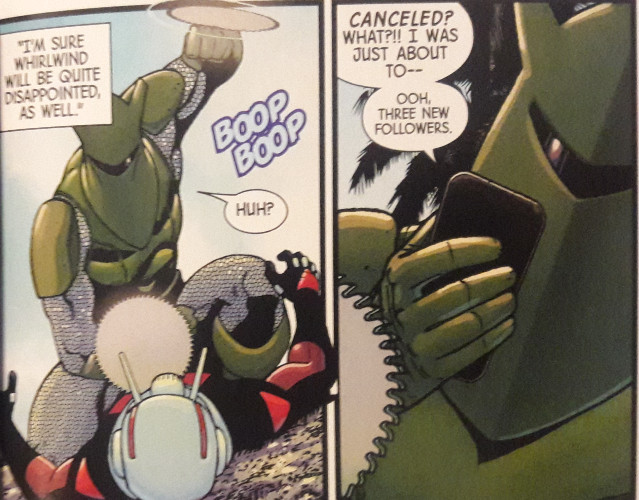 It’s difficult not continuing to comment just how much fun this collection ends up being. Hank Pym’s only appearance hilariously confirms he only allowed Scott to keep the suit because he knew there was no way Scott could eclipse Hank’s legacy as a superhero (this naturally, coming from the guy who invented Ultron). Action sequences make wonderful use of Scott’s size-changing aptitude (though, admittedly, feel surprisingly light on the “ant” part of his moniker). Dialogue is replete with jokes and gags that are sure to make readers smile several times as you read through the collection.

Certain references to pop culture or real situations I’m either unaware of or too young to understand definitely went over my head, but the references I was able to catch were amusingly utilized. You’ve got a guy in a bear suit who wants to watch the Chicago Bears! Scott references Ocean’s Eleven while planning a heist! Scott and his daughter watch Battle Royale, which Scott hilariously refers to as a “Hunger Games ripoff.” Spencer wields his understanding of pop culture remarkably well, coming across as someone really knowledgeable of the vast corners of film, sports, and television rather than appearing as some middle-aged guy pretending to know what Game of Thrones is. The references and gags end up enriching the narrative, making Scott feel like an actual person who enjoys the same movies, shows, and music you would enjoy. 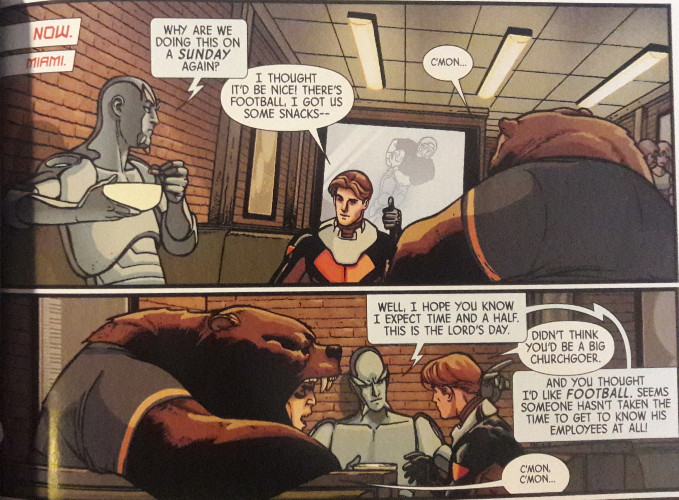 I’m not fully caught up on Spencer’s Captain America run, nor am I sure I want to be. But if Superior Foes of Spider-Man and his Amazing Spider-Man runs aren’t indication enough, Astonishing Ant-Man proves Nick Spencer’s capabilities as a writer. I cringed and maybe shed a tear when I heard he was announced as Dan Slott’s ASM replacement. The last few years have smoothed my perspective on Spencer, and this collection helps nail my new position firmly in place. When he’s not making political statements by twisting your favorite patriotic Marvel superhero into a ludicrous talking head, Spencer makes engaging, character-driven narratives. It helps prove to me that Spencer’s Captain America run was the exception to the rule. I appreciate it when a comic can do that--not only entertain you with a story but help you love how the story was formed, not only give you gripping characters but help you admire (or learn to admire) the men and women who put these wacky words and images into coherent panels and plots.