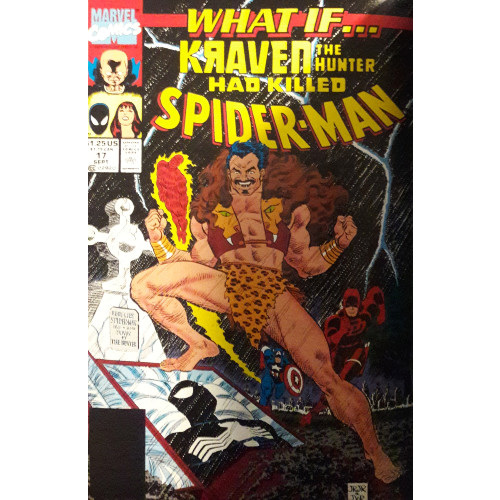 A while back, we immersed ourselves in the famed Spider-Man arc known as “Kraven’s Last Hunt.” J.M. DeMatteis led us through a dark yet powerful story arc which showcased Spidey’s last showdown with old nemesis Kraven the Hunter ("last" being a subjective term, naturally). Kraven tranquilized Spidey, buried him alive, and then assumed his costume to become “the Spider.” Temporarily transforming into his foe, Kraven fought his way through the New York underbelly while Peter clawed his way from his grave and reunited with MJ. Kraven was defeated and, in shame, killed himself.

Such an impactful, infamous story was almost guaranteed a slot in Marvel’s second What If-? series. For years, What If-? had explored the numerous possibilities that existed when certain stories went a totally different direction than they had been published, always under the carefully observant gaze of the Watcher. “What if Spider-Man joined the Fantastic Four?” “What if Phoenix had lived?” “What if Captain America had never been frozen in ice?” The series tackled these myriad concepts, usually ending on some dour note and confirming that, as bad as life could be in the mainstream Marvel Universe, it was at least better than other possibilities.

Thus, it made sense for someone to take a shot (with words instead of a hunter's rifle) at DeMatteis’ epic arc and ask themselves, “Hey, what would have happened if the Hunter had replaced his tranqs with actual bullets?”

“What If...Kraven the Hunter had Killed Spider-Man?” 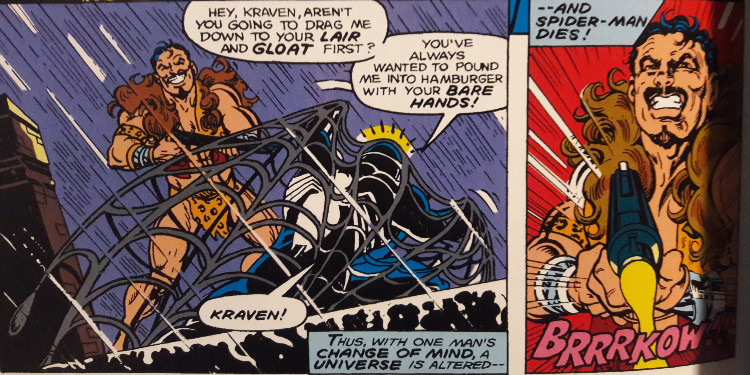 A single twist of fate is all it takes to birth a new reality in a What If-? comic. Spidey chooses to swing after Gwen Stacy instead of firing webbing at her after the Green Goblin dumps her off a bridge, and suddenly, she’s Mrs. Parker instead of a memory. Cosmic rays interact with the Fantastic Four’s biology in different ways, and instead of being the world’s smartest rubber band, Reed Richards becomes a massive pile of mushy gray matter. Tiny shifts in reality here and there cause whole story arcs to become upended or sail in directions they were never meant to.

In several of these alternate looks at a fictional universe, the writers tend to rely on coincidence or some minor, almost inconsequential alteration of events to change things completely. Someone’s body twists a different way, or they stumble, or they somehow dodge a laser or speeding bullet. Minor events turn into big deals, and part of me wonders if most of these writers got a really cool idea in their head (“Hey, what if Jean Grey didn’t die?”) without considering how to get to that question or engagingly unravel the answer after posing their initial inquiry. 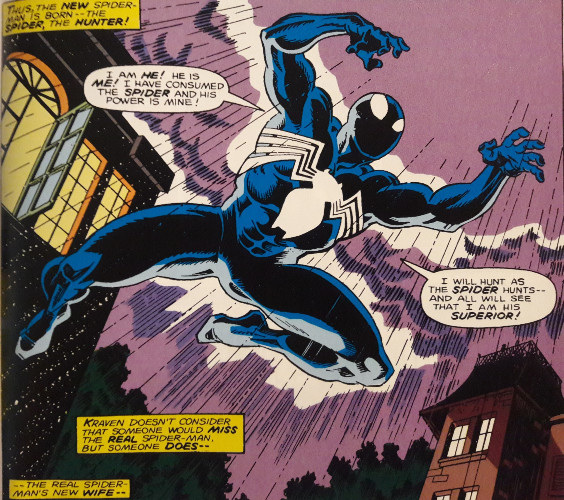 Howell approaches his story differently. Kraven exchanging tranqs for bullets, in my mind at least, doesn’t seem like a minor alteration or fateful occurrence. It’s an intentional change in the Hunter’s plans, an actively mental bit of participation in re-weaving the skeins of Spidey’s fate. Instead of going through with his original plan, Kraven goes for the jugular immediately, cutting off Spidey’s life without going through the whole “bury him alive in a box” concept. It’s maybe the best part of Howell’s story; from there, events go a little kooky, kinda like a certain leopard-pelted poacher.

At its core, the idea is a fantastic exploration that fundamentally alters not only DeMatteis’ original plot, but drastically alters the outcome for our webbed hero (naturally). DeMatteis’ narrative hinged on two elements: Spidey’s perseverance and Kraven’s insanity. With Spidey dead, Howell is free to explore other options, which he readily does. MJ’s role is far greater in this issue as she becomes a champion of justice following Peter’s death, hoping to inspire the world (and maybe a particular brush-headed publisher) to change their views on her heroic husband. Daredevil and the Human Torch, fast friends with Spidey as we’ve seen on more than one occasion, do their darndest to traverse the city and hunt a Spidey-wannabe (Kraven in disguise) with Captain America in tow. Howell takes a less philosophical approach to DeMatteis’ material, offering more frantic, action-packed material. He plays with situational irony well, keeping our other heroes and MJ in the dark about Spidey’s grim fate, and largely keeping the “Peter Parker is Spider-Man” connection under wraps as long as he can as well. 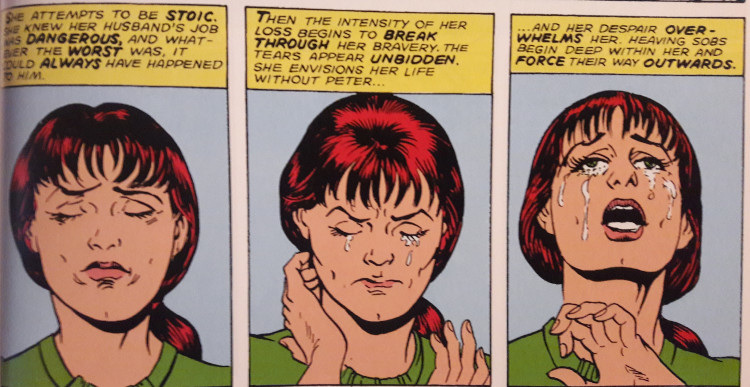 Howell’s discreteness means fantastic payoffs late in the issue as both our assembled heroes and MJ discover Spidey’s demise. The tense build up--experienced more by our characters than the reader--opens in floods of tears as our characters are wracked with the pain of Spidey’s passing. This is made all the stronger as our characters attempt to convince an incredulous public of the hero’s true worth, now lost.

Yet not all works out smoothly, not for our characters nor for Howell’s script. His depictions of Aunt May and J. Jonah Jameson are at their basest, making them caricatures instead of wielding them effectively. MJ breaks the news of Peter’s death and alter ego to May, causing the older Mrs. Parker to fly into a rage, accusing MJ of concocting lies and kicking her out of her life forever. Howell is, seemingly, leaning upon the age old crutch of May’s revulsion towards Spider-Man, an enduring characteristic from the Lee/Ditko days. “Enduring,” yet not “endearing.” May’s reaction is perhaps understandable, yet her hackneyed dialogue wounds the scene. I think Howell wanted to tether his tale so strongly to how May had been characterized in the past, he failed to inject any of the emotion she may have realistically exhibited at such news. 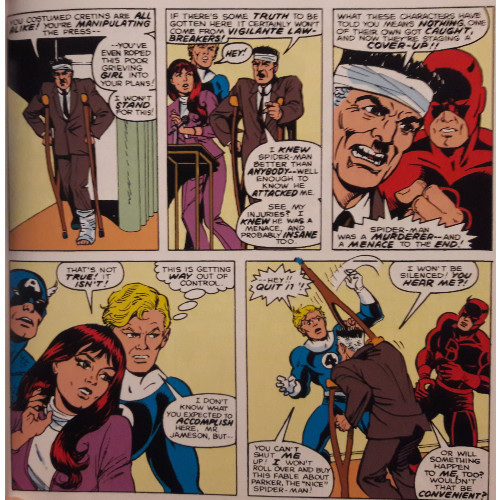 The same goes for JJJ. Always the crusading enemy of Spider-Man, Jonah attacks MJ and her allies in characteristically boorish fashion, further vilifying the deceased Web-Head. Again, Jonah’s character, like May’s, is certainly reminiscent of his classic, historical portrayal. Yet Howell uses him to stir up dissension and discord in others in a way that seems far too convenient and implausible. I never quite fully believed the notion that one newspaper guy could cause an entire city to earnestly discredit a superhero, particularly back in the Lee/Ditko era. Howell simply jumps aboard that somewhat cliche bandwagon and rides along.

The problem, for me, stems from a specific root: in each case, May and JJJ’s reactions are geared towards Spider-Man, not Peter. Granted, with his identity outed, the two concepts become inseparable. And May, to her credit, briefly grieves Peter’s passing before venting her rage. But the focus is, primarily, focused on the Spider-Man angle, with Peter’s personal involvement removed or set aside. MJ certainly mourns her husband’s passing, but for everyone else, the focus is on Spidey. If Howell were trying to make a point--by focusing on the hero, you miss the man behind the mask--I’d say he does a good job. But that doesn’t seem to be the case. Thus, he misses the mark of DeMatteis’ original story, in offering a well-told Peter Parker narrative that's just as good as the Spidey saga DeMatteis crafts.

Kraven’s portrayal also comes across a little weaker in this issue. DeMatteis stressed Kraven’s connection to his homeland and his yearning for the days when Russia and her nobility were preeminent. Spidey, in Kraven’s mind, becomes a symbol of all that is wrong with America’s western principles and bloated capitalism. By (symbolically) killing our hero, Kraven not only assumes Spidey's identity but eradicates his greatest philosophical nemesis as well. All of that is lost in Howell’s issue, which skirts over the philosophical discourse with a momentary mention before plunging into the aspect of Kraven Howell really seemed to enjoy: his madness. His Kraven is a raving lunatic, muttering nonsense and literally feeding on Peter’s body. 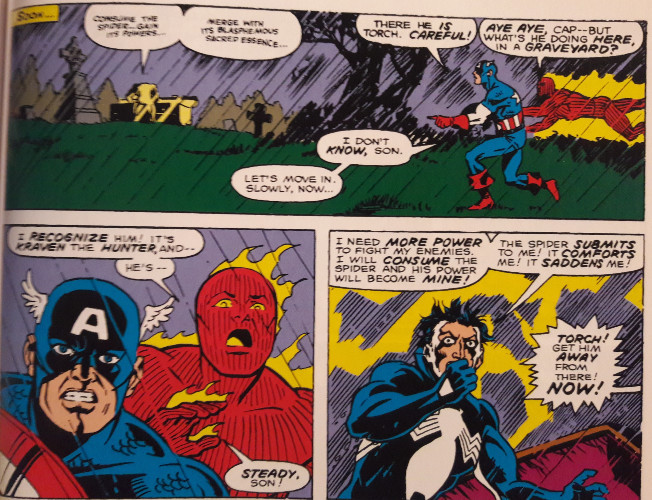 It’s a fun rendition of Kraven, to be sure, with the Hunter spouting off random gibberish and acting more insane than thoughtful. Yet it’s nowhere near as impactful as DeMatteis’ version of the villain, whose descent was gradual yet intentional. DeMatteis’ Kraven was mad to begin with, yet in subtle, nuanced ways that become more apparent as the story progressed. Howell’s character is out-and-out goofy from the moment he pulls the trigger, becoming more Joker-ish than the intense, methodical madman DeMatteis made him to be.

As I said, the main idea of this alteration--Kraven killing Spidey rather than burying him alive--is a fascinating concept. In execution, unfortunately, Howell’s visualization of this potential future is weaker than DeMatteis’ actual story arc. Characters react well to Peter’s death--the emotions of MJ and his costumed allies in particular are well-written--and Howell’s more insane version of the Hunter is definitely entertaining. Unfortunately, Howell seemed to have come up with the idea, thought it was great, and ran with it before considering a genuinely engaging story that thoughtfully manipulates DeMatteis' original narrative. He tosses around ideas without genuinely considering the actual ramifications. Would May be as heartless to MJ as she is depicted in this issue? Why would Jonah never mention his anger, disappointment, or shock at Peter’s dual identity? Howell’s story ends with a bizarrely distorted future wrapped up in politics and MJ’s dedication to clear her husband’s name, a brief light in an otherwise pitch black tunnel. Yet the decent character moments, which I personally believe are the crux of this issue, are lacking.

But we do get an image of Kraven hungering for spider roadkill. That’s something, right?