Though his characterization is imperfect, Todd McFarlane handles this five-issue arc with more tact and tenacity that his previous Spider-Man narratives 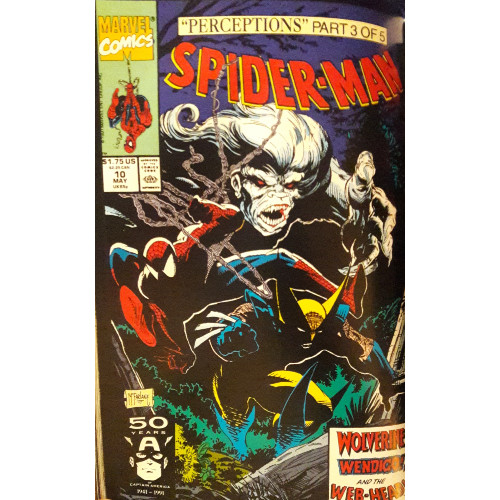 I have not been overly favorable to Todd McFarlane recently. In my last two reviews on his “adjectiveless” Spider-Man series, I’ve criticized his writing, digging into his drafty dialogue and colorless commentary. The man has a gift for crafting engaging stories through art, but once his pen starts writing words, he loses himself in the verbiage. I recall early Stan Lee stories which felt the same–dialogue which felt forced into panels constructed prior to his script, bending to the contours of the art rather than the other way around.

I am unaware as to how McFarlane wrote and illustrated his stories, but for both “Torment” and “Masques,” he seemed to hit upon a favorable idea without fully fleshing out either arc or determining his cast’s voice. As a result, dialogue was often awkward and potentially engaging thematic elements–like creating a contrast between Spidey and the Lizard in “Torment” or Ghost Rider and the Hob/Demogoblin in “Masques”--fell by the wayside or feel weak in execution.

I guess the title to McFarlane’s third arc is appropriate then. I indeed headed into it with a particular perception…but was it different by the end then it was at the beginning? 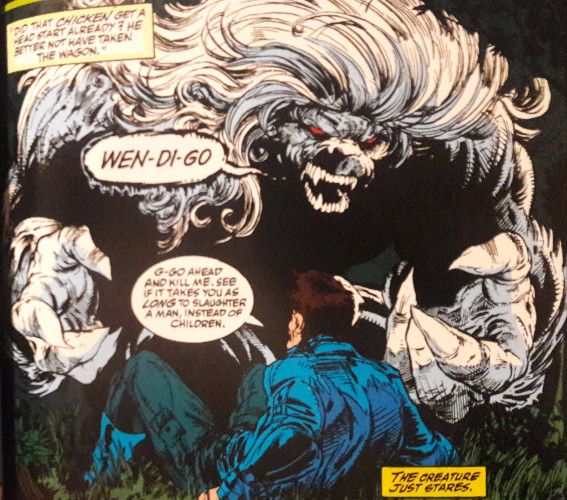 For this arc, McFarlane maintains the preachy-esque commentary he tried inserting into both “Torment” and “Masques,” but as I read, I found I appreciated his voice more (for the most part) than I did in either previous arc. I would like to argue that this story’s set-up lends itself to more engaging commentary.

In a small town in Canada, two bodies are discovered, with the deaths quickly related to a mythical monster known as the Wendigo. The news creates a media firestorm as reporters pounce on the man-eating monstrosity as the definitive culprit behind the gruesome murders. Our intrepid photog, Peter Parker, joins a Daily Bugle reporter on assignment to the Great White North…and, perhaps, brings his Spidey suit along just in case the mystery deepens. 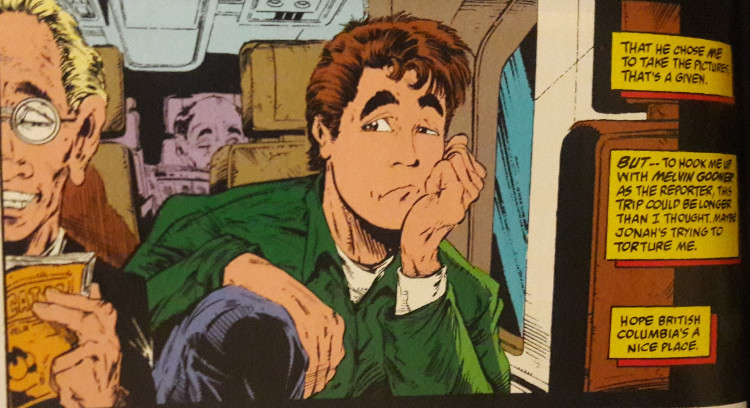 I got Stranger Things vibes from the story, or perhaps equally pertinent, Frank Peretti’s This Present Darkness (and even though his novel Monster sounds a tad more appropriate, I have not read that book and cannot comment on it). Small town. Enshrouded in secrets. Horrifying monsters prowling the shadows. Grim darkness haunts the pages of McFarlane’s narrative, taking the story in sinister directions. This environment, it seems, would be a perfect place for him to start espousing ham-fisted life lessons and quasi-metaphysical or religious ramblings. And he does. Just a little.

But most of McFarlane’s words, especially as the story starts off, are found through the voice of newspaper reporter Anna Brooks, her experiences, and the media which encroaches on this town in British Columbia. Anna's experiences, and how she shares those experiences with the wider world, shape the story’s scope, allowing McFarlane a far more character-driven lens through which to tell his story than in previous tales. Instead of inventing a concept and then building his characters atop it, McFarlane introduces a central character and tells the tale through her. Anna's insight and experiences form a foundation and direct the enigmatic happenings in this town; she lays out the premise, and it’s through other characters–such as townsfolk, Spider-Man, and adamantium-clawed guest star Wolverine–that we learn the truths and falsehoods set forth in this initial narrative. 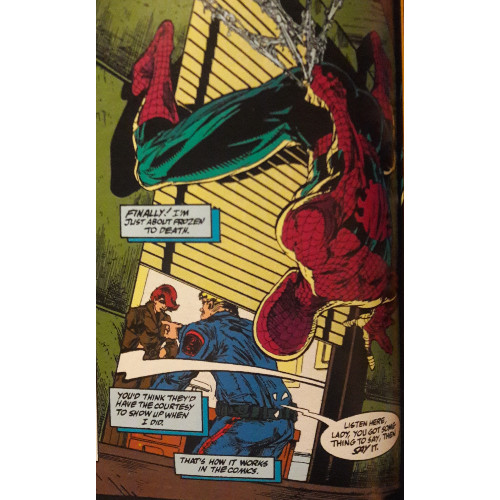 The entire story is predicated on its central title–as different characters offer various perceptions on the facts, McFarlane balances half-truths and outright deception. Each character sees the situation as something unique: Anna sees a story spilling from an incident she initially divulged, one which could earn her prestige; Peter Parker sees a killer on the loose and possesses a dedication to uncovering the truth; hunters and other reporters both wish to get their hands on the Wendigo–whether literally or figuratively; Wolverine sees a violent situation becoming worse and wants to end the whole thing. These views fight and claw each other like ravenous wolves, warring for dominance, struggling to be heard above the din as absolute truth.

McFarlane fantastically maintains this balancing act of truth and deception through the entire arc. I mentioned in my “Torment” review that, canned dialogue aside, McFarlane’s pacing was decent. Both “Torment” and “Perceptions” wind themselves well along whatever track McFarlane travels. “Perceptions” feels like this perhaps a tad more than “Torment,” because unlike McFarlane’s first arc, this third Spider-Man outing feels based in a theme, as I mentioned before. McFarlane plays up the mystery of the situation, digging up debates and bodies both. Is the Wendigo guilty of the murders? Is he innocent? What kinda conspiracy is lurking around this small Canadian town? 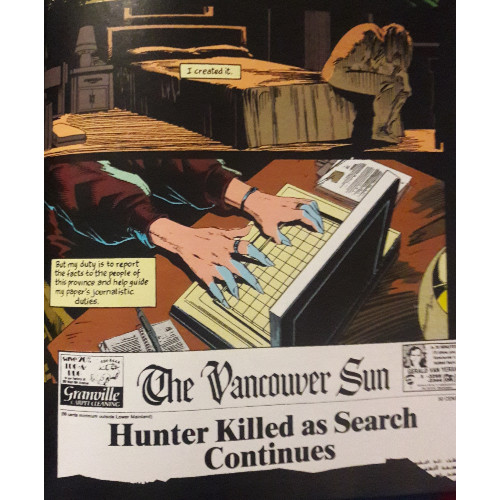 Each chapter allows our heroes to get deeper and deeper into the slog; viewpoints are challenged as counterpoints are raised, arguments judged on their merits, and actual truths discovered beneath a mire of lies. This all goes back to the previous stories I mentioned before–Stranger Things, This Present Darkness–with McFarlane imbuing this little town with chaos, seeding normal life with stark tragedy and phenomenal circumstances, and bringing in our heroes to navigate the carnage. I don’t know if “small town permeated with conspiracies and creatures” is a genre in itself, or even a sub-genre of fantasy or sci-fi, but McFarlane handles the concept nicely. Parents lose sons, an overbearing sheriff throws his weight around (unlike the ever-loving Jim Hopper), reporters dig for clues, hunters look to bag themselves a sasquatch (yee-haw!). The mystical and mundane are thrown together; somehow, it all works.

Now for a few notes on Wolverine. 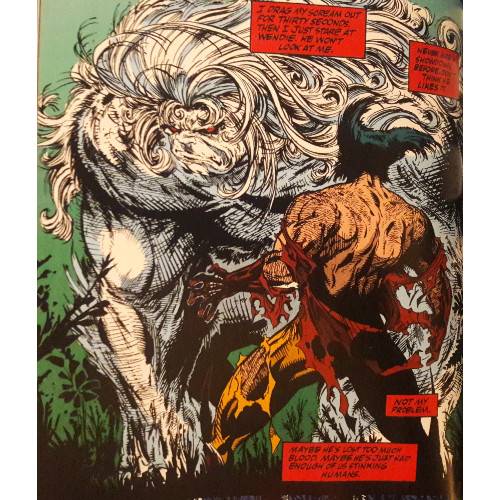 I don’t completely dislike McFarlane’s take on the character. He seems to understand some of Wolverine’s history, and though he doesn’t explicitly capitalize on Logan’s comic book connections, he allows implications to bleed into the tale. If you’re aware of Wolverine’s first appearance in Incredible Hulk #180, which featured an all-out Wolvie/Hulky/Wendy brawl, his connection to this story makes perfect sense. “Perceptions” isn’t a follow-up to that original tale, naturally, but Wolverine’s prior tussles with the shaggy white behemoth support his appearance here.

Additionally, McFarlane implies a prior Spidey/Wolverine team-up–Spider-Man vs. Wolverine #1–where Wolverine learned Peter’s identity. A short scene in “Perceptions” sees Wolverine casually call out Peter’s alter ego to his face, an amusing nod to that previous tale. I appreciated McFarlane’s willingness to reference older tales, even if they’re a little oblique. The nods allows him to make Wolverine’s inclusion more pertinent to the narrative, rather than leaving the mutant as a popular guest star in the mag. 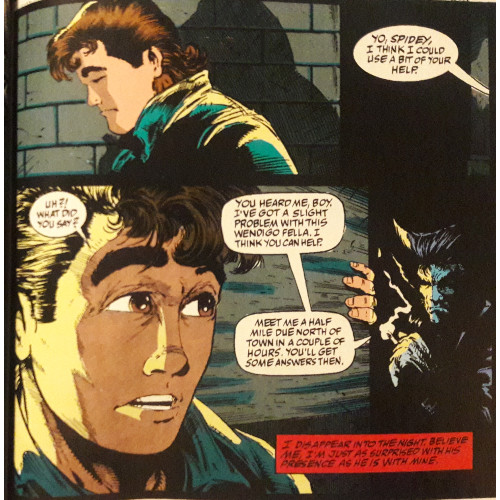 What I’m not entirely sold on is Wolverine’s shtick (shnitkt?) as he impacts the story. McFarlane gives him an awkwardly-written anti-violence mentality, particularly aimed at hunters killing wildlife indiscriminately as they hunt for the Wendigo. Dude’s heart is in the right place, but McFarlane gives Wolvie this environmentalist/animal rights angle while, occasionally, letting the mutant remind us he’s also there to figure this situation out. He just wants to stop the killing, and as admirable a notion as that is, McFarlane once again falls into the trap of unconvincingly wording Logan’s intentions.

Much like the religious mumbo-jumbo his characters exuded in “Masques,” Wolverine talks in big ideas and generalizations while failing to voice his beliefs with nuance. That’s probably what bothers me. He aims a gun at a hunter’s head while telling him to stop killing animals because, y’know, violence is bad. Which is a really weird thing for Wolverine to talk about, right? I was reminded of the opening scene of Chris Claremont and Frank Miller's original Wolverine limited series--Logan mercy-kills a bear poisoned by a hunter and then confronts the hunter. His issue isn't so much the hunting as it is the sloppy, merciless way the hunter handles the situation. Again, part of me gets McFarlane's idea–his Wolverine is upset by viewing a situation he believes is unjust, similar to Claremont's take. But I wrestle with McFarlane slapping an angle onto the character without allowing him the opportunity to come across as genuine. 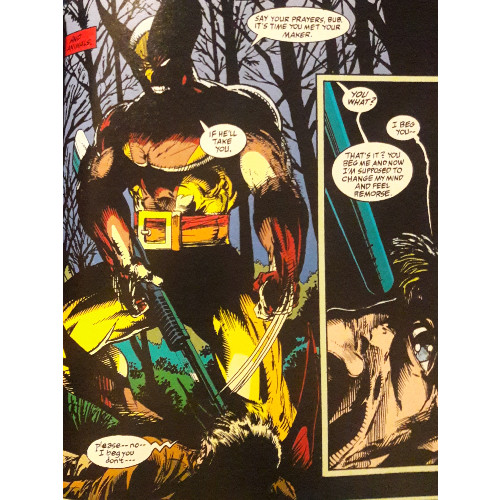 On top of this, Wolverine takes a really harsh attitude towards Spidey the entire arc. McFarlane seems to be playing up this whole “serious, moody samurai fed up with the punk kid” angle, as Wolverine repeatedly snaps at Peter as Spidey injects a couple of, perhaps understandably, ill-timed jokes. One scene in particular feels awkward, as Wolverine immediately jumps down Spidey’s throat for an off-the-cuff quip. McFarlane’s trying to play up the differences between these two men, focusing on potential areas of conflict, and though they never come to blows and eventually team up, he leaves the tension far too basic for it to become anything unique or rewarding.

Similar to a David Michelinie-penned Amazing Spider-Man arc with the Punisher I recently reviewed, McFarlane tries to balance out Spidey’s more jovial demeanor with Wolverine’s grittier attitude. But that’s really all he brings out of either character. I think something could be said about their shared resolve to discern and act upon the truth, but in building up to that moment, McFarlane’s unable to craft any engaging conflict or pair the two heroes properly. 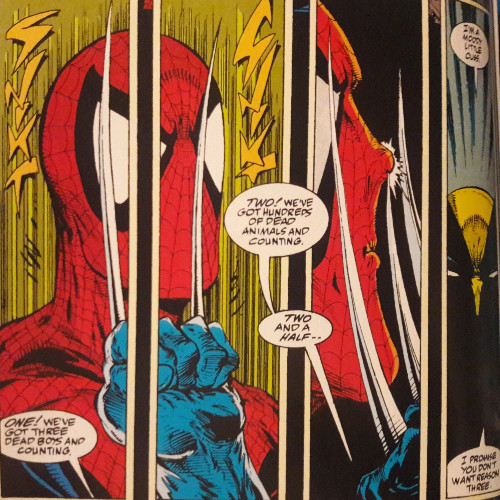 Christopher Priest’s Spider-Man vs. Wolverine deftly created conflict between both men by pitting them against each other philosophically. Spidey and Wolverine each had a conflicting idea on how to handle a situation and needed to duke it out. Here, McFarlane is sorta trying something similar, causing them to disagree over how to handle the Wendigo situation. But he actually creates a conflict which doesn’t make much sense. Spidey’s behavior, I would argue, becomes a tad more juvenile while he engages with Wolverine, who rudely bats away Spidey’s opinions and concerns like he’s not worth listening to. Dialogue feels framed around intentionally causing conflict instead of allowing the story to organically craft tension.

It’s one of those “If only these guys would shut up and listen to each other” scenarios, serving McFarlane’s purposes while making little logical sense. Yes, Spidey has the tendency to flap his gums a tad too much, and sure, Wolverine’s a grizzled warrior with little patience. But those characteristics emerge only as McFarlane needs them to. Both men act defensively stubborn, and I refuse to believe their reactions are genuine. The same thoughtfulness McFarlane applies to this story–a tale built upon perceptions, misguided and otherwise–is lost when pairing his main protagonists together

So in the “narrative” category, we find a stronger entry than either previous Spider-Man tale. McFarlane crafts a well-written, monstrous murder mystery that develops decently. It’s the right kind of grim for a Spidey story, painting a dark environment and juxtaposing our primary color-clad (eh, two outta three ain’t bad) adventurer against the bloody background. And for the most part, McFarlane successfully navigates the seriousness and varied viewpoints of the situation. He toys with truth spectacularly, leading the reader down trails with a dimly lit-lamp, the path becoming clearer the further you travel. He stumbles here and there–like his somewhat stilted take on Wolverine and the cumbersome comparison he creates between the mutant and Spidey–but ends up finding his footing again. “Perceptions” is largely a creature of comparison; when held up against its slightly older brethren, this five-issue story is a more navigable course for readers to trek, with a more rewarding summit at the horizon.