Spider-view: “Spirits of the Earth” 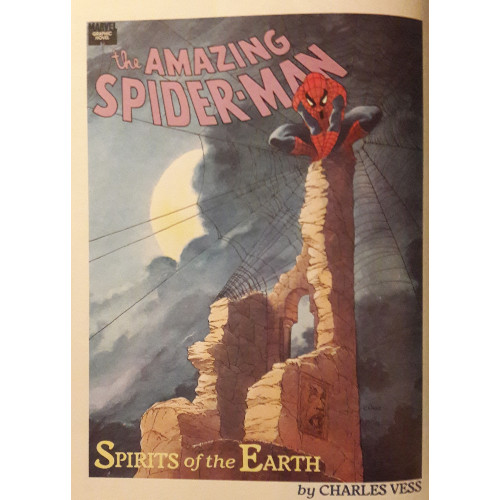 Years ago, Gerry Conway wrote an Amazing Spider-Man story where Aunt May inherited a piece of land from a previously unknown relation of hers who had unfortunately passed away. This concept was tethered into a larger storyline that saw her almost tie the knot with Spidey foe Doctor Octopus and revealed that May’s inheritance was, in fact, an island in Canada that housed, not only one of the largest uranium deposits on the planet, but also the reactors necessary to process the element! With a plot so out of left field that it wasn't even on the same continent let alone the same baseball diamond, you’d think Marvel creators would think twice before crafting another “family member of Peter inherits land from a deceased relative never mentioned until now when the plot demands it.”

Though nowhere near as egregious or impractical as nuclear reactors, Mary Jane earns an inheritance in this graphic novel, serving as the impetus for a story that takes Peter away from his beloved New York City and throws him into the wild fields and fjords of Scotland.

So light the fireplace in your cozy croft, put those wee bairns to bed, and pray your laird doesn’t come knocking for the rent money while you peruse this graphic novel of Spidey exploring the highlands.

“Amazing Spider-Man: Spirits of the Earth” 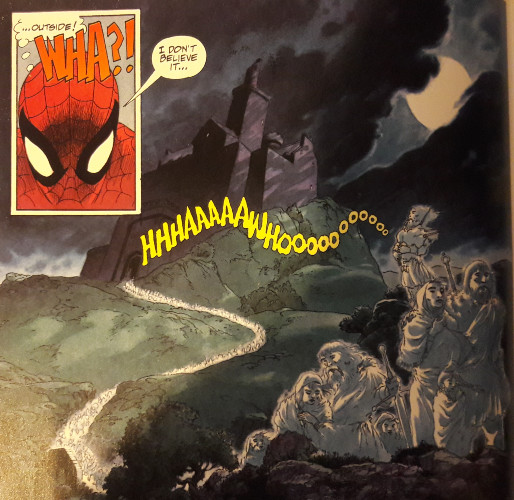 I am not, admittedly, terribly familiar with Charles Vess’ comic work. I know he illustrated the covers to Web of Spider-Man #1 and WSM Annual #1, as well as a back-up story written by Roger Stern in Marvel Fanfare #6. His art for the covers feels more grounded, more Spidey-like, if I may. One depicts the Web-Head perched upon a New York gargoyle; the other sees him battling a man in knock-off Iron Man armor. If anything, the back-up story, starring Doctor Strange, allows the best glimpse into Vess' fantasy-centric niche. His bibliography includes stories centered on the Warriors Three, a graphic novel adaptation of Steven Spielberg's Hook, and work with Neil Gaiman. Sending Spidey away from his native New York to a realm filled with ghosts, magic, and fairies feels right up the illustrator's distinctly fantastical alley.

“Spirits of the Earth” feels like a painting on a canvas, with landscapes representing art you’d find by Bob Ross. I wasn’t too sure how much I’d enjoy Vess’ art when I began reading, but once the story transitioned from New York to Scotland, I found his visuals of tree-lined hills, dark caverns, and a towering stone castle more impressive than the concrete and steel of the Big Apple. As a short essay in the back of the novel describes, Vess is familiar with the landscape of Scotland, bringing a certain level of depth and personality to his art. As someone who has never ventured to Scotland (I’ve visited Northern Ireland and England, so close?), I enjoyed experiencing the brainchild of an individual who obviously loved a country he had visited several times.

While reading the graphic novel, I couldn’t help but compare “Spirits of the Earth” to a previous Spider-Man graphic novel (one contained in the same collection that included Charles Vess’ piece) I’ve already written about: “Hooky,” written by Susan K. Putney and illustrated by Bernie Wrightson. The two tales start in surprisingly similar fashions, with Spidey busting heads in New York before being whisked away to enchanted lands. The primary difference is that Putney and Wrightson’s world of Cloudsea is purely fictitious, a virtual sea of clouds (as the name implies) that feels born from some ancient fairy tale. Wrightson’s art majestically constructs the world, with Spidey being the only out-of-place element visually, looking more like he was slapped on top of the backgrounds rather than woven into them. 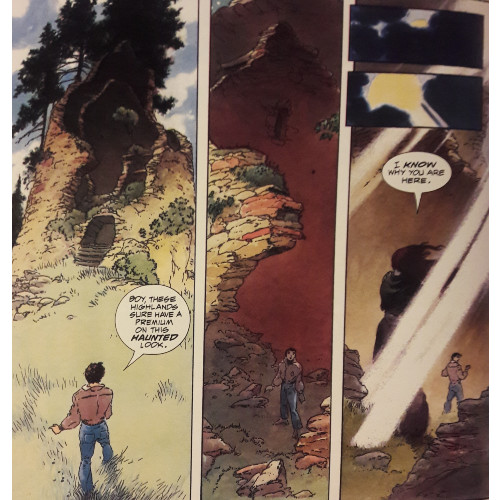 Vess suffers no such problems. Perhaps by setting his story in real world Scotland, Vess is able to solidly grasp the look and feel of the countryside Peter and MJ visit. Even Spidey feels more “part” of the landscape and less like the image that Wrightson creates. It most likely boils down to a difference in styles--Wrightson seems to want Spidey to retain a comic book-esque appearance while casting him against visually fantastic backdrops, whereas Vess remolds Spidey into his own image to match the realistic characters and landscapes he develops. What served as mildly distracting in “Hooky” becomes a seamless aspect of the art in “Spirits of the Earth.”

Story-wise, “Spirits of the Earth” starts off a little odd, as mentioned above. The inciting incident--MJ inherits property from a recently deceased relative--is quickly brushed aside once the story gets rolling. The Parkers only spend a few panels at the cottage in the middle and near the end of the graphic novel (not much of a second honeymoon, but maybe less tense than the first?), and it’s never really resolved what happens to the property once they leave Scotland to go back to New York. It’s just a way for the two to reach Scotland, and while it’s a harmless plot device, I’d argue it’s slightly odd to shoehorn in a previously unheard-of aunt who’s giving away a cottage to Peter’s wife and rarely bring it up throughout the piece. 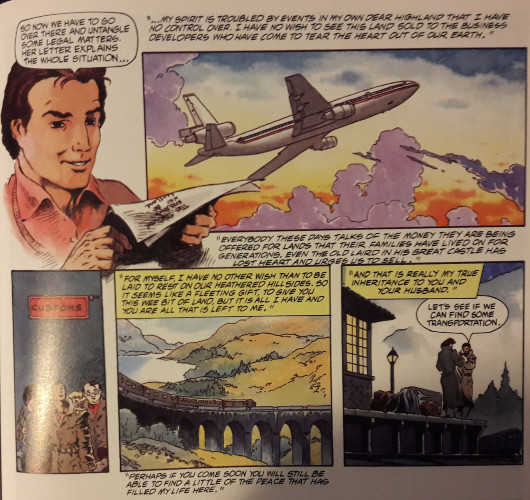 Peter and MJ soon become embroiled in town politics, specifically the history of the Munro Clan and how they’ve been haunted for generations. Patriarch Hugh Munro claims to have been driven from the family residency by ghosts who have also kidnapped his grandson, Hugh Jr. We also meet his jerk nephew Angus--we know he’s a jerk because he repeatedly hits on MJ, despite being aware of her married status, ugh--and an old woman named Mairi, who the people believe to be a witch. Peter visits the castles and runs into the ghosts himself, becoming convinced that something villainous is afoot, and whether the ghosts are real or not, he’s going to get to the bottom of it.

The graphic novel tackles themes of Scottish lore and nature, with Vess working to keep a foot planted in both concepts. Mythology and nature are intertwined here, and Vess does a nice job at keeping you on your toes as to whether or not Scottish spirits and magic are real or just a part of the culture of the landscape. You ultimately discover it doesn’t matter much if ghosts exist or if they’re fabricated; the emphasis here is that Scotland has a history and mythology all its own, important and integral to the people who dwell there. 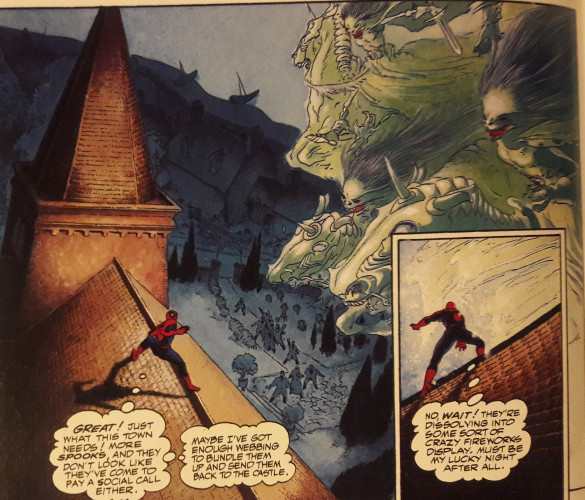 Also, nowhere does Vess make the villains of the piece--goons associated with the X-Men-loathing Hellfire Club--appear as dimwitted fools seeking to lay waste to the earth. They’re not your cliche mega-corporation ruthlessly stripping the earth for its resources to power their doomsday device, or a Westernized company seeking to destroy a civilization and its culture for their own vile purposes. The Hellfire thugs are greedy toughs working for a sinister employer (whom I shall not reveal), and their plot certainly has environmental ramifications, but Vess weaves it into his story rather than laying it all out explicitly. There’s a “keep the culture of Scotland safe” message here, but Vess does not use verbose emotion or overbearing rhetoric to force his message upon readers. Instead, he introduces characters who love where they live, and a foreign couple from America who pledges to help however they can. 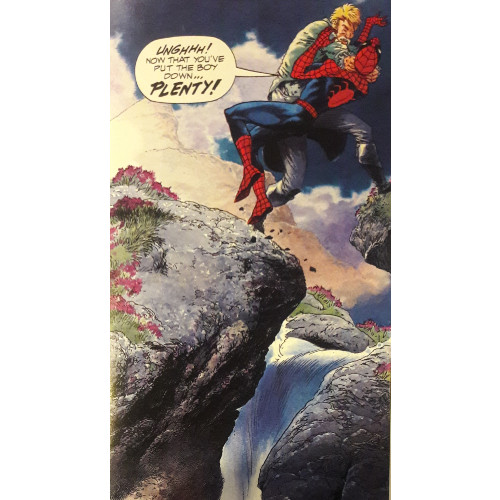 “Spirits of the Earth” improves, in my opinion, once Spidey discovers the Hellfire Club’s nefarious plot and seeks to stop them. From here, the comic becomes your standard superhero fare. Entertaining as Vess’ luscious landscapes have been up until the final third, he focuses on a lot of exposition to get his points across. While this makes for engaging characters with understandable intentions and clearly promotes the message he’s striving for, it does end up feeling repetitive at moments. Once we reach the final act, and the Hellfire Club’s plan is uncovered, Spidey is able to cut loose and battle crooks with guns in a cavern beneath the ground. A not-so-startling betrayal leads to a culminating fist fight between Spidey and the Hellfire Club’s “mysterious” employer, which is entertainingly crafted by Vess, especially a moment where Spidey and the villain straddle two hilltops, one foot planted on each side. I do think this particular ruffian gives Spidey too good of a fight for someone who has no powers. Understandably, having Spidey clean the clock of every crook he comes across is just no fun; you want to see him struggle against his foes, but when it’s a guy who can only kick and punch at him, Spidey really should have no problem. 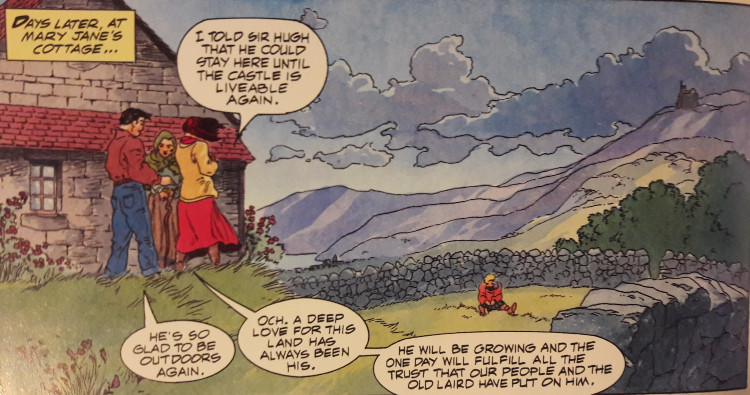 Vess has crafted a love letter for a land he himself fell in love with. His Scotland is pristine in nature and troubled in soul, a beautiful land tormented by some ugly people with ugly plans and ugly actions. A young boy and old man play victim to the whims of others, showing readers that it doesn’t matter if Spidey saves people in New York or across the Atlantic Ocean. He’ll fight evil no matter the form and save innocents no matter the location. Occasionally, Vess’ love for Scotland and its landscape trumps his storytelling abilities. You never fully get the sense that Vess started with “Spidey in Scotland” and built his story from there (okay, maybe the mostly-untouched MJ subplot points to that a little), but as you read, you feel like Vess’ love for the country served as the foundation for him and that Spidey joined the thought process soon after. This does create the slightly odd sensation of Spidey’s trip to Scotland feeling a little forced, but Vess covers up this small failing with beautiful environments for the Parkers to traipse through, a dangerous cavern sequence out of an Indiana Jones film, and a narrative that invokes fantasy to prove the wonder of reality.