This issue tries hard to string along some engaging ideas, tripping over a potentially engaging finale as it struggles to bring in some cathartic closure 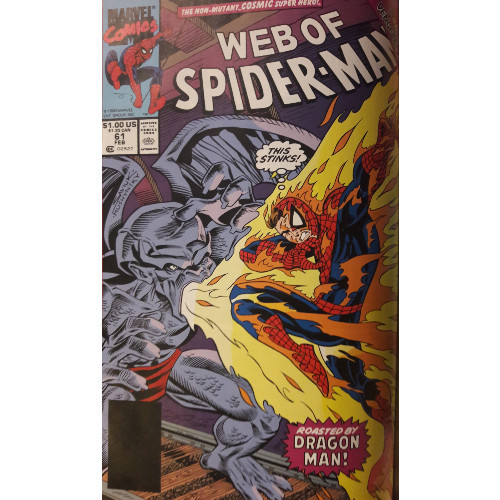 You know the drill by now.

WHO: Our boy Spidey, who’s gained a plethora of cosmic abilities, and a host of supervillains trying to crush him.

WHAT: Yeah, that’s what I’m asking. “...what?” I mutter almost every other page.

WHEN: Congrats, you’ve found yourself at the crossroads between the Marvel Universe-spanning “Acts of Vengeance” and Spidey-title-trapping “Cosmic Spider-Man.” It’s 1990. Say hello to massive, entangled crossovers.

WHERE: The iron canyons of Manhattan and a couple of local locales--Empire State University, Peter and Mary Jane’s swanky new pad, Aunt May’s backyard, a junkyard, a couple of bridges. Heck, if you’re the Hulk, you even reached outer space.

WHY: Yet another question I find myself asking. That’s what I’ve tried figuring out.

All caught up? Mostly? Not really? Let’s make tracks anyway.

“Dragon in the Dark” 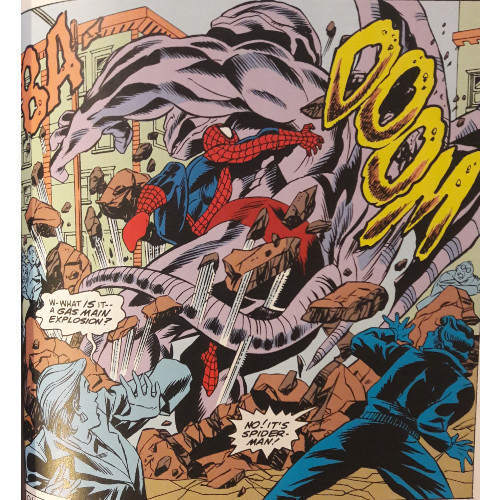 This stinks! Peter bitterly grouses on this issue’s cover as Dragon Man’s flames spew over him, igniting his costume. I can’t help but feel a slightly meta tug toward this comment, mentally applying the statement towards the issues I’ve been covering the last handful of posts. “Cosmic Spider-Man” has had its moments, but as I’ve remarked before, the story is waning. It's perhaps one main reason why I've struggled to post as often as I would have liked, because writing these reviews currently feels like more of a chore than it should.

Gerry Conway, as I have also noted, has a better handle than David Michelinie on this "Cosmic" concept. Michelinie has had his fair share of “stand up and cheer” moments the last few issues--particularly in how Spidey has squared off against both Magneto and the Hulk--but he’s actually done little to retain my attention beyond the general premise of each issue. Here and there a subplot floats lazily by, sparking interest for a moment, but no great conflagration has come from any tidbits so far. Conway has done a somewhat better job holding my interest--he’s approached certain issues through a slightly more philosophical lens. Spidey hammered Goliath to a pulp, calling to mind Aunt May’s recent lecture on power. He’s found himself at the mercy of a frightened crowd (and, to a lesser extent, his own wife), playing the victim card as people start to view this new Super-Spidey as an even greater menace than they beheld him as regular Spidey

So, yeah, in some ways, it kinda does stink to be Spider-Man at the moment.

Easy out there: he quits. 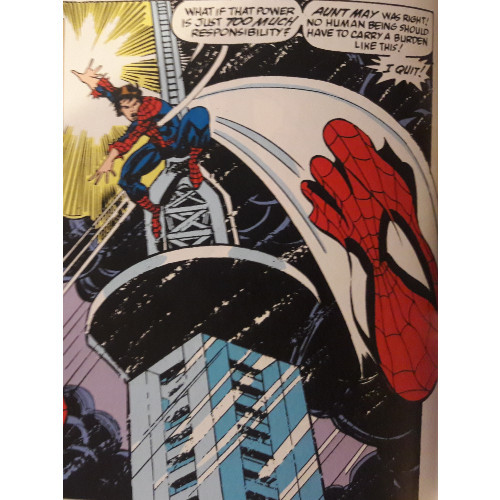 In what appears to be an engaging start to Conway’s most recent issue, our Wall-Crawler has scaled a tower, raging as a storm bears down upon him. He’s tired of the treatment he’s received, the people who’ve turned away him even as he tried his hardest to keep them safe. All these fancy powers, all these new opportunities for responsibility, and he just can’t seem to get it right. He questions whether he has too much power...and wonders if that brings too much responsibility.

Conway, over Michelinie, has certainly brought out this wrestling match between Peter and himself...Peter has never grown wholly comfortable with his new abilities, and Conway makes his questioning a genuine grapple. Sure, he can do all kindsa crazy newfangled things--dude can fly, after all--but if the zappy finger lasers are gonna cause people to back off, even his wife, then what’s the point? 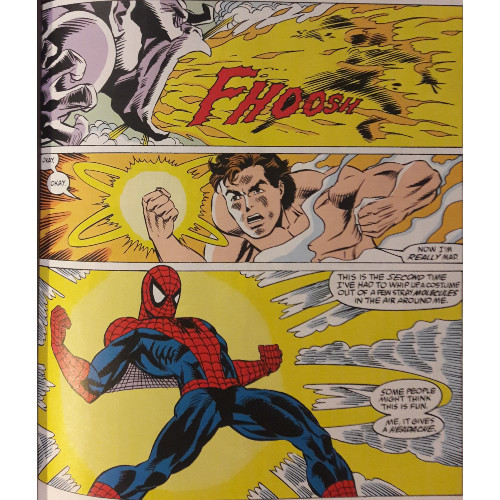 Thus, Conway tries to maneuver the “Acts of Vengeance” aspect into play here by showcasing a hero/villain skirmish with some potential. Spidey’s battle with Dragon Man is intended to display Peter’s struggles physically, not just to tie into “Acts” and not just to showcase Spidey’s new power set. Other fights feel like they either fall into the category of “We’re doing this because ‘Acts’ is going on” or “We’re doing this because we gotta show how cool and powerful Cosmic Spidey truly is.” The concepts lend themselves to some engaging visuals, and at certain times, particular battles feel necessary for the story to progress. Conway’s Spidey/Dragon Man skirmish feels like Conway is genuinely trying to propel the story forward.

Does it work completely? No, for one specific reason I’ll latch onto later. But let’s focus on the good bits for now: Spidey’s fight with our fantasy-inspired mechazoid comes at this arc’s lowest point, where a bedraggled, emotionally beat Spidey considers throwing in the towel. Especially with hindsight, you know this ain’t gonna stick. You know anytime Spidey says “Spider-Man No More!” he eventually pops back into the threads. But at least, with Peter feeling as bushed as he has been, Dragon Man’s appearance feels somewhat necessary to give our buddy the moment he needs to go “Know what? Maybe I got this thing after all!” Yeah, it falls under the increasingly soaked umbrella we’ve seen cover our simultaneous plots--supervillain usually not associated with Spider-Man is sicced on Spider-Man--but in this instance, unlike others, the fire-breathing baddie’s appearance feels rational and understandable. 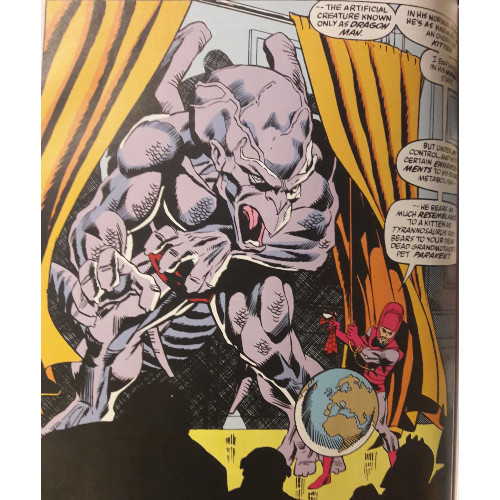 It’s what happens after Spidey defeats Dragon Man that undoes some of Conway’s storytelling. In the aftermath of the battle, several subway passengers whom Spidey rescued back our buddy up when he thinks he’s caused just another destructive incident. It’s a brief, encouraging moment and not the issue I have with this story. I like it, I do. Given all the crap Spidey’s received from his less-than-adoring public (which has been, as noted, even more vehemently against him after his power surge), this single moment of gratitude from a handful of innocent people feels needed and welcome. But this single moment gives Spidey an unbelievable boost of confidence. “All right, New York!” he shouts, pumping his fist, as if his belief in humanity, or even just this city and her inhabitants, is restored completely.

I struggle with finding such a hopeful conclusion from such a tiny experience. The people he rescued represent the slightest fraction of New Yorkers, most of whom I’d expect would still be anti-Spidey. It certainly gives the battle the uplifting conclusion it really wants, but I’d argue that Spidey’s victory over Dragon Man already feels like a check in the “win column” for our hero. Not that “celebratory New Yorkers” pushes the idea too far, but given the limited setup, the emotion of the moment feels stretched thin. 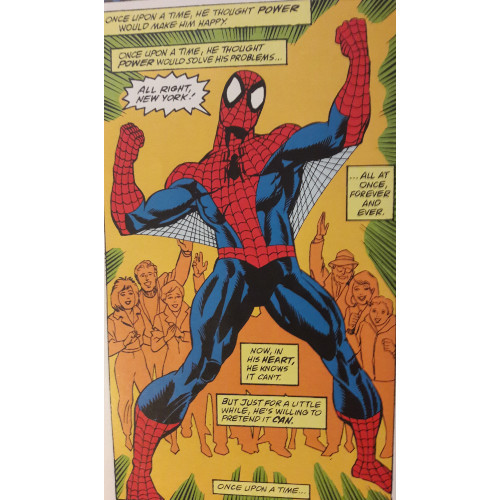 This is also, I should note, technically the final “Acts of Vengeance” chapter we’ll be reviewing (I know, you miss that plot point already). “Cosmic Spider-Man” continues for another chapter but that has little to do with the ongoing “Acts” narrative. Unfortunately, to my slight dismay, I discovered Web of Spider-Man #64-65 have a “finale” of sorts with the “Acts” narrative. I know I’ve grimaced and groused my way through this arc, but those two issues feature a whos-who of supervillains from the last several issues. Trapster, Titania, Graviton, the Brothers Grimm, and Goliath all assemble to take down our Friendly Neighborhood Spider-Man, probably for revenge. As much as I’ve (rightfully, in a subjective sense) complained crankily about this arc, the sight of several super crooks joining forces to get vengeance on a (spoiler) not-so-cosmic Spider-Man made a geeky part of me momentarily excited. Sadly, as it stands, I will not be able to read those issues and give this arc the crowning(?) ending analysis it deserves(?).

Once again, I appeal to the Powers-that-Be at Marvel to, someday, start releasing Epic Collections that gather up Spidey issues from books other than ASM. Perhaps only then will I complete stories left unfinished, narratives left dangling like a shredded flag as I move forward with time, ever closer to the present and ever farther from the unfinished eras of the past.