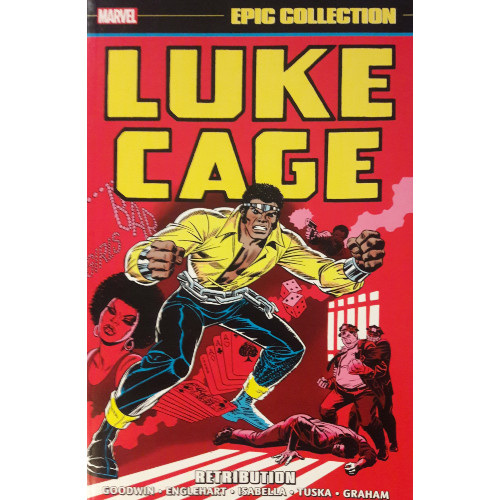 I’ve always been a sucker for street-level heroes. Sure, I’ll peruse bigger, more bombastic arcs out there--the original Secret Wars remains one of my favorite Marvel limited series--and I have a soft spot for epic arcs which take theoretical, cosmic, or godlike concepts and give them human form (just wait til we get to The Infinity Gauntlet!). But as a reader, my bread-and-butter generally consists of more down-to-earth characters. Spidey. Daredevil. And on the DC side of things, a certain Dark Knight Detective.

Recently, I’ve found myself growing fond of a certain few members of the Netflix’s Defenders line-up. Daredevil, in particular, has worked his way steadily up the ladder (as my various reviews of Frank Miller stories will no doubt attest), but I’ve jumped a little deeper into other pools as well. A short while ago, I reviewed Iron Fist’s first (and assumedly only) Epic Collection. Imagine my surprise to discover that his Defender friend and Hero for Hire chum, Luke Cage, was receiving his own volume. This collection came out just a few months ago, and I’ve finally gotten around to reading it.

Sweet Christmas, what a ride. 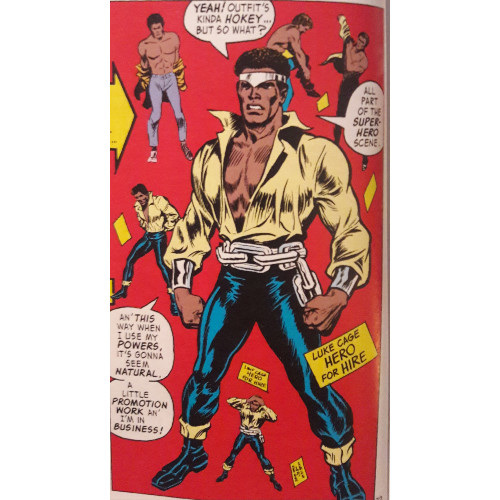 Introduced two years before his ferrous-fisted friend, Luke Cage is the product of Marvel’s attempt to inject diversity into their comics circa 1970. Though the Wakandan Black Panther holds the title for the company’s first black superhero, Luke Cage was the first African American hero to receive his own ongoing title. Various blogs I’ve looked at debate the series’ merits, arguing its impactfulness (and tactfulness) in bringing true diversity to the Marvel Comics world. The consensus seems akin to what I’ve read about Stan Lee and Jack Kirby’s introduction of the Black Panther: noble intentions often wounded by stilted writing and an obliviousness to actual African or African American culture and speech.

That being said, as a writer largely ignorant of fully proper African American dialect or language, I feel unable to comment on the writers’ attempts at injecting real speech or slang through Luke Cage’s words. Did people really go around calling practically everybody “sweetheart” or “darling” as Cage tends to do? I assume not, but I’m not in a position to offer a counter argument. I read this volume with a grain of salt, curious if Cage’s voice typified men of his generation and age. Again, I leaned towards “improbable.” 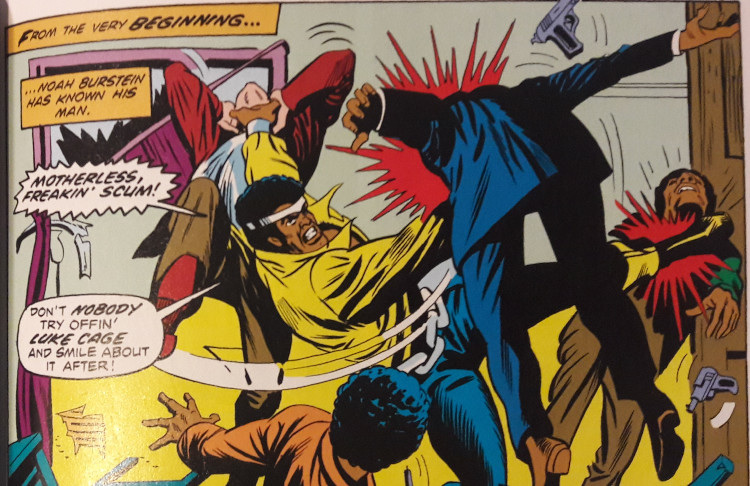 I know the “their heart was in the right place” argument doesn’t work for everybody, but I tried my best to read this volume with certain notions removed. I didn’t head into this volume hoping it would be an accurate depiction of its title character’s race or culture, primarily because I don’t understand much of that myself. I noted the importance of it, and I can tilt my head respectfully towards later writers who better understood Cage’s background. With this volume, I mainly focused on the story and how Cage moved his way through the world the various writers created for him.

What struck me initially about the title is how interestingly it twists the superhero definition. Cage, shortly after receiving his powers through an experiment gone awry, heads into the “hero for hire” business. There’s no notion of him doing the right thing just to do the right thing; he smells a financial opportunity, fashioning a costume and making business cards to promote himself to surrounding New Yorkers. He rents a seedy office above a theater. He constantly notes expenses, like all the yellow shirts he’s gotta order after a fight. Cage is, in one way or another, not your typical superhero. 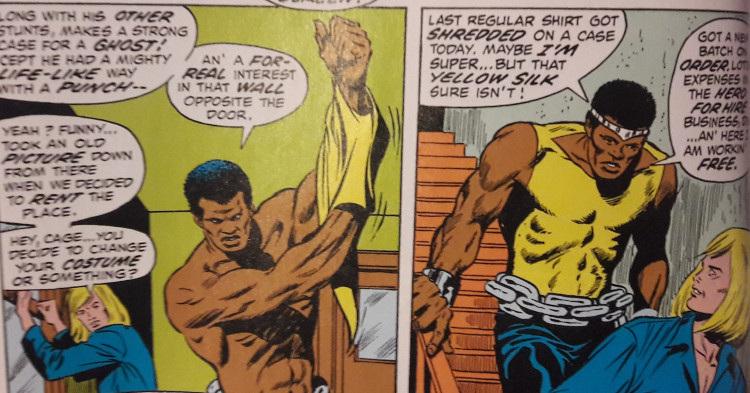 Some might scoff at the general concept or find it downright ridiculous or insensitive. Granted, the idea is a bizarre one to swallow, especially when you remember Luke is an escaped convict and the whole business angle may not be best in maintaining a low profile. Still, it’s a highly unique idea which overturns basic superhero principles. He still has the tragic backstory as a motivator--a deceased girlfriend and one angry best buddy--but writers keep having Cage turn ideas upside down. The costume, complete with the oft-ridiculed spangly tiara, is more business attire than superhero outfit (Cage’s reaction to the whole costume concept is sort of a “might as well look the part” shoulder shrug). The name “Luke Cage” is less a superhero moniker and more a way to keep his real name, “Carl Lucas,” under wraps. His deeds of daring-do are intended for profit than selfless heroics, making me wonder why more heroes don’t take that particular approach (okay, yeah, Spidey tried riding the entertainment circuit, but even that was without the “hero” factor figured in). And Cage’s HQ, above the theater, is not so much a superhero headquarters as it is just a cheap detective-style office, often attacked by supervillains who can easily suss out its location.

Does the concept have its foibles? Absolutely. At some point, the theme of villains attacking Cage’s residence becomes less humorous and more repetitive; the idea of Luke’s home/office becoming a battleground adds to Cage’s financial woes, but after a time, it becomes more annoying than anything else. And while I can certainly see the “hero for hire” angle being part of the original pitch for the series, the idea springs to Cage’s mind far too quickly and inadvertently to make much narrative sense. The Netflix series went for a more “defender of the people” vibe with Cage, and while the comic series’ protagonist is by no means selfish or stingy by pummeling for profit, the concept isn’t as strong as Cage straight up fighting for the good of his fellow man. Considering how little money he actually makes with the gig, Cage might’ve been better off moonlighting as a vigilante. 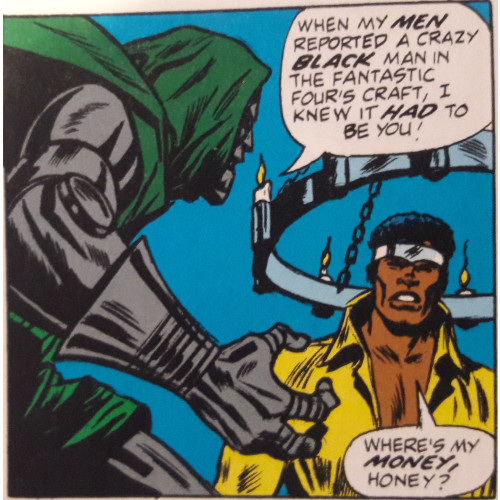 Surprisingly, from a narrative standpoint, the “hero for hire” bit never gets old. Heading into this volume, I expected repetitive stories pulled straight from dime-store detective novels: someone shows up on Cage’s doorstep, in trouble, ready to pay for his services. Cage gets up, beats the tar outta some flunkies or junkies or hunkies, and ambles on his merry way with some extra pocket change. Not so. Stories range in this volume from standalone beat-em-ups to a slightly longer arc that sees Cage trounce Doctor Doom for $200. The Doom story, in particular, is the highlight of the volume. If you weren’t behind Cage before, then seeing him fly all the way to Latveria and lead a robot revolution against the tin tyrant should have you pumping your fist. Some have commented negatively on the story--especially in regard to one hilarious yet infamous panel (see above)--but the arc deserves special mention. Doctor Doom may think Cage’s motivations paltry (fighting the lord of Latveria for a mere $200?), but in context, Cage’s motivation is admirable. Yes, the idea is far-fetched, but it’s still a powerful endorsement for the character. Ignore the sum for a moment. Ignore the memorable, meme-able quotation. At its core, this short saga is about Doctor Doom getting his head handed to him by the person he’d least expect to come after him. It’s fantastic.

And it’s not the only standout moment. Our writers do a great job at crafting unique arcs, each with a different focus. One story sees Luke tackle a criminal during Christmastime, a fun tale that plays with notions of identity. A trilogy of issues sees Cage interact with some previously introduced characters, incorporating some nice tension and playing with recurring characters. After the series is rebranded Power Man, Luke is forced to fight a villain by that same name (who first appeared in the Avengers and later fought Spider-Man as Goliath) for the “right” to use the moniker. Certain tales and characters are forgettable--a fight in a big tent vs. a goon who created talking circus animals is a little hokey--but others offer Cage some decent moments of humanity and fighting prowess. 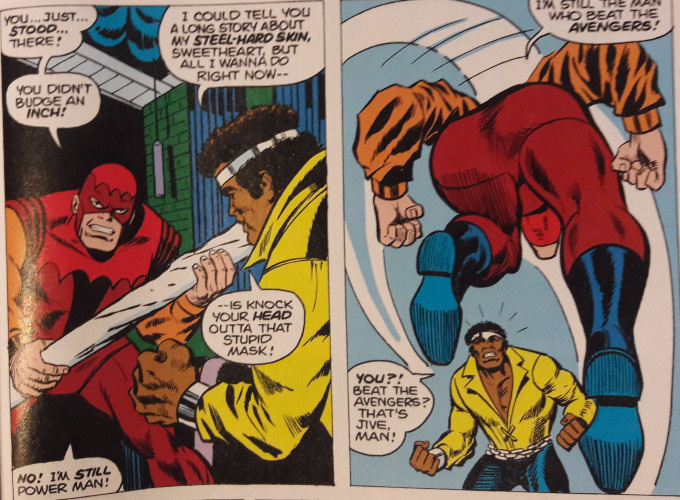 The writers assembled here, throughout the volume, actually do a bang-up job inventing a world around Cage. Claire Temple (who fans may recall from the various Marvel Netflix series) meets and falls in love with the superhuman strongman. Doctor Noah Burstein, responsible for the experiment that changed Luke’s life, plays a recurring role. Columnist Phil Fox has the irritating habit of popping up when you least expect him, digging into Cage’s life in an attempt to learn all he can about New York’s newest hero. As a result, Cage is forced to face some of his own demons, reflecting on his “criminal” past and seeking redemption in moving forward and forgetting his prior life. Other characters and villains pop up here and there, and while it’s difficult to say that Cage has a solid rogues gallery by this volume’s end, his supporting cast is strong. Writers pick up threads and characters I never expected to return, offering decent continuity while creating genuinely surprising arcs.

Also nicely unexpected is the way in which our writers depict Cage’s powers. Similar to my initial thoughts regarding the format, I figured I’d get bored reading about Cage slugging off bullet after bullet as he steered his 300-pound, nigh invulnerable frame towards his foes. Yet our creators do more than fire slugs at him. He faces fire, traps, guys with inhuman strength, the threat of drowning, falls...the methods villains seek to secure his destruction are varied, and oftentimes, writers use these methods to make some decent points about Cage’s abilities. Yeah, he can slug off a handgun no problem, but bigger armaments sting or even knock him back. Can his 300-pound body keep him afloat, and if not, is Cage susceptible to drowning as the rest of us? What does fire do to him? How about noxious odors? Are his innards just as indestructible as his outards? The answers become very clear--Cage is, after all, still alive all these decades later--but the fun is in the exploration of these ideas. 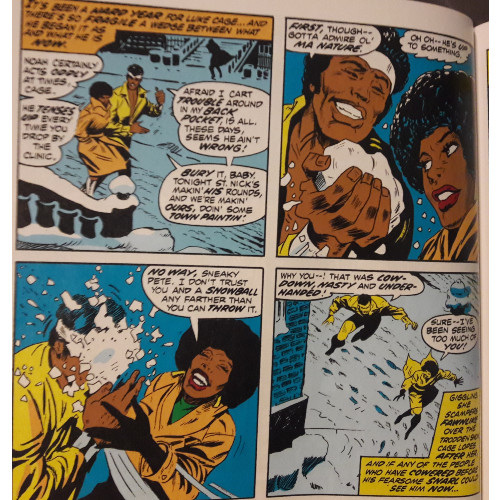 I reacted to this volume like I reacted to the Iron Fist Epic Collection: surprised I enjoyed it more than I initially believed I would. Luke Cage is a highly entertaining twist on standard superhero notions and tropes. I understand people find fault with his dialogue and the way he’s presented, and I won’t argue against that. But aside from all that, this volume is an engaging romp through 1970s New York. Luke Cage isn’t like your other superheroes. His character cast is strong, his continuity is entertainingly intertwined, his stories are arguably solid (the dude takes on Doctor Stinkin’ Doom in his own country! Come on!). It’s not perfect, I get that, and in several cases, it’s not ideal. But it’s fun, more fun than I envisioned, meaning that I’ll still defend the aspects of the narratives included in this collection I find worth defending.