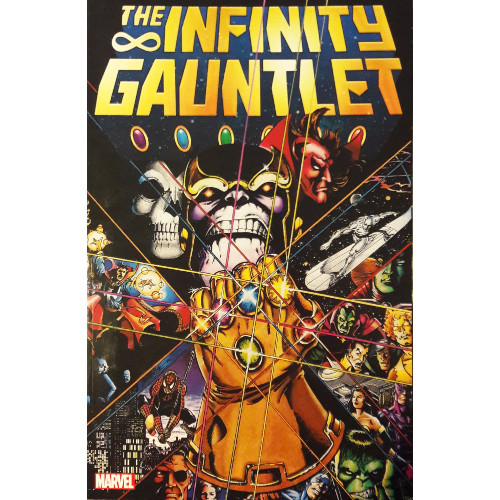 In 2018, Marvel Studios released the financial juggernaut Avengers: Infinity War. The film saw Marvel Cinematic Universe arch-nemesis Thanos, the Mad Titan, gather the six incredibly powerful Infinity Stones–those troublesome ingots from the dawn of time–and use their collective cosmic energies to wipe out half the universe with a simple snap. According to research done at Georgia Tech, a finger snap occurs in 7 milliseconds, over 20 times faster than the blink of an eye. So, literally, before you could blink…half of all life in the entire universe was gone.

Thanos and his master plan owe their thanks, primarily, to the machinations of Jim Starlin, who created the character in 1973’s Iron Man #55. As we’ve previously examined, Thanos attempted to extinguish life twice and was foiled twice, once by the Avengers and Captain Marvel, the second time by the Avengers and Adam Warlock. That second defeat left him imprisoned in stone, wavering between life and afterlife, until the physical depiction of Death, embodied as a young woman, returned him to total existence. In love with Death and seeking to win her respect and hand, Thanos sought out the Infinity Gems (as they’re called in the comics), defeating or deceiving the Elders of the Universe to obtain them.

As Infinity Gauntlet opens, our Mad Titan wields power incomparable. Our good friend Spider-Man has been largely absent from these cosmic confrontations, save an adventure where he freed an imprisoned Adam Warlock and, to my eternal joy, indirectly saved the universe from Thanos’ plans. But the Web-Head now finds himself drawn into Thanos’ devastating decisions, forced to join a grand party of adventurers seeking to end the Mad Titan’s crippling influence over the universe, like the most cosmic campaign of D&D you’ve ever seen. 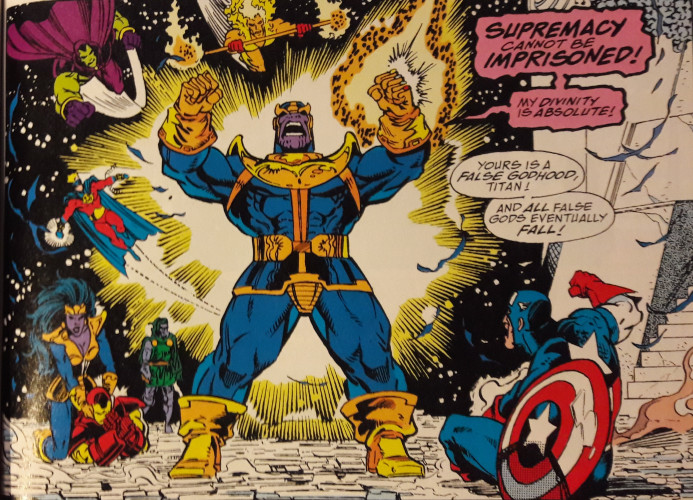 A small word, fraught with incalculable weight. A tiny “SNAP!” lettered in a bottom panel on page 26 of Amazing Spider-Man #121 indicated to observant fans that Gwen Stacy’s neck broke when Peter Parker caught her in his web. It’s written in small text, though not imperceptible, and adorned with a miniature exclamation point at the end, the only embellishment given the word to showcase its enormous weight.

Thanos’ finger-clack is given no such treatment–it’s merely four letters, highlighted in yellow, not even ornamented with punctuation. Yet George Perez lingers on the moment, freezes it in time, treats it as the final second in a series of ever-building, ever-intensifying panels. All the power of a god, distilled into a small, generally insignificant gesture.

And half the universe dies. 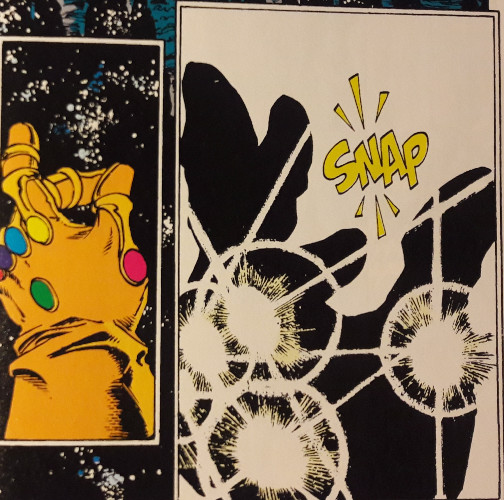 Aside from Thanos’ wanton misuse of his deific dexterity, Infinity Gauntlet is not, surprisingly, treated as a massive epic until about halfway through the series. It takes our assembled heroes–including Spidey, Doctor Strange, Wolverine, the Hulk, Prince Namor, Quasar, Warlock, the Silver Surfer, and various members of two Avenger teams–three issues to prepare their seemingly suicidal assault on the newly-christened, multi-chinned god. To be sure, the series isn’t exactly subtle either: Perez and Starlin work wonderfully together to piece through the terror Thanos’ snap causes, as well as other godlike actions, before building up to a climactic space battle. The Earth is rocked with energy, tsunami-like waves cascading into cities, earthquakes rocking countries, the planet itself torn from its cosmic foundations. And before all this, the unmistakable terror of Thanos’ Rapture-like snap.

These three first issues go to great lengths to showcase the sheer horror of Thanos’ actions. I don’t know how many “tie-in issues” were involved in this series, fully calculating "The Snap’s" effects, but Starlin and Perez play with a full range of emotions here, guaranteeing adequate exploration of the aftermath. “Mary Jane!” a horrified Spidey cries out, launching himself across the city to see if his wife is among the missing. Captain America watches in terror as Hawkeye and Sersi vanish before his eyes. Odin dons “[t]he ceremonial eyepatch of sorrow” (in a wonderfully unintentional bit of humor) prior to convening a council of sky gods to discuss the ramifications of Thanos’ behavior. Family members, friends, teammates vanish. The gods themselves deem this catastrophe worth gathering over. The literal Marvel Universe is united by sheer terror and uncertainty.

What makes the first half of this series so impressively engaging is that lingering I alluded to earlier. Starlin and Perez take their time, develop the story, introduce conflict, and build their cast. Heroes are filled with a true sense of horror regarding Thanos’ actions, as well as deep confusion. Starlin brings in Adam Warlock and Pip the Troll, weaving in his previous narratives and characters. The series, even up to this point, is highly readable and enjoyable if you’re not familiar with Starlin’s previous work on Captain Marvel and Warlock, but as I’ve noted elsewhere, having that background enhances the series. So much effort has already gone into setting up Infinity Gauntlet–whether intentional on Starlin’s behalf or not–that you almost believe Starlin has been building to this moment since 1973.

Up until this point, Starlin had treated Thanos as both villain and quasi-anti-hero. From his first appearance in Iron Man #55 through his first confrontation with Captain Marvel and first stab at godhood, Thanos had been the bad guy, plain and simple. His aims were terrifyingly destructive, seeking to devastate the universe out of love for Death. As he continued writing the character, particularly in Warlock, Starlin complicated the Mad Titan’s personality, posing the wannabe deity as a enigmatic ally with plans and plots of his own. Always scheming, Thanos became more strategic in his aims. This culminated in The Thanos Quest, a two-part limited series which saw Thanos as the hero of his own story, hunting down the Infinity Gems and obtaining his long-desired, vaunted godhood. 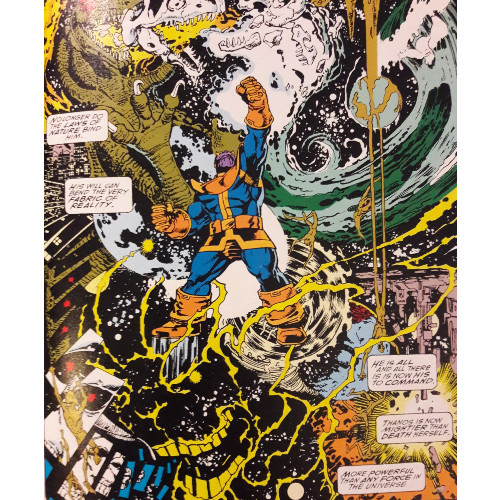 Infinity Gauntlet lays out this terrific, destructive clash of ideals and personalities between Thanos and his foes. Read in isolation, you’d see the Mad Titan as truly insane…yet, when you look at the character’s arc overall, from his genesis to now, you find an incredibly compelling character. Thanos isn’t just another crazed demagogue with celestial powers…he’s a brilliant planner whose long-suffering has–at long last!–produced results. His dream is finally in his grasp, and his love finally sees the power he wields. Yet the power proves as much a burden as it is a blessing. Thanos wavers between strategic mastermind and petulant child, able to methodically wipe out half of all life just as easily as he emotionally vents his rage against entire planets and cosmic deities. He wrestles with himself just as much as he wrestles with others. Godhood has been obtained, but what to do with it? What will truly offer him satisfaction now that, seemingly, he’s reached his ultimate goal?

You sympathize with Thanos the way you’d sympathize with an infant throwing a tantrum…you cannot allow the child to behave as such, but you know they lack the capabilities of acting any other way. Perhaps that makes Thanos either more worthy of sympathy or more deserving of rage, depending on your viewpoint: does the Mad Titan know any other way than how he’s behaved, particularly now with the gift/burden of godhood? Or is he simply a victim of his own plodding steps towards cosmic devastation? 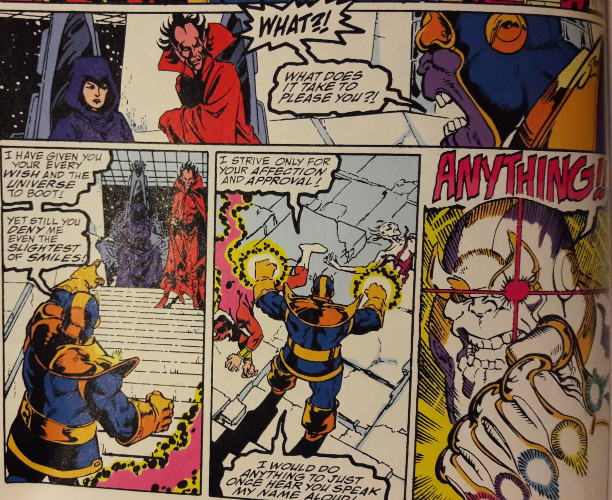 Starlin’s second half (where Perez is switched out with Starlin’s Silver Surfer partner-in-cosmic-crime, Ron Lim) engulfs the heavens in brutal battle. These are the scenes with which the series has become synonymous: our heroes, agonizingly and seemingly futilely, throwing themselves against Thanos and his omnipotent might. Beautifully-crafted and simultaneously horrific sequences and moments are forever ingrained in the minds of readers: Iron Man, decapitated; Cap’s shield, obliterated; Thor, turned to glass; Doctor Doom, revealing his duplicitous nature, grasping for the Gauntlet; the Silver Surfer, grasping at a last-ditch attempt at snatching the mighty mitten from Thanos’ hand. Even our dear Spider-Man winds up on the receiving end of a rock to the head.

So much of the hope concocted in the series’ earlier half is laid waste in a matter of pages. I was reminded of a moment from the original Marvel Super Heroes Secret Wars (written by Jim Shooter and illustrated by Mike Zeck): Doctor Doom, having recently stolen the Beyonder’s deific might (an earlier example of his power-hungry nature), obliterates a group of heroes marshaled against him. Starlin and Lim’s sequence is as powerful as Zeck’s imagery yet far more dramatic and extended, with Thanos taking pleasure in sundering his foes left and right. It’s an extension of his battle against the Elders of the Universe–who are these puny people to stand in the way of grand Thanos’ desires? He’s the hero of his story, and he shall have his day. 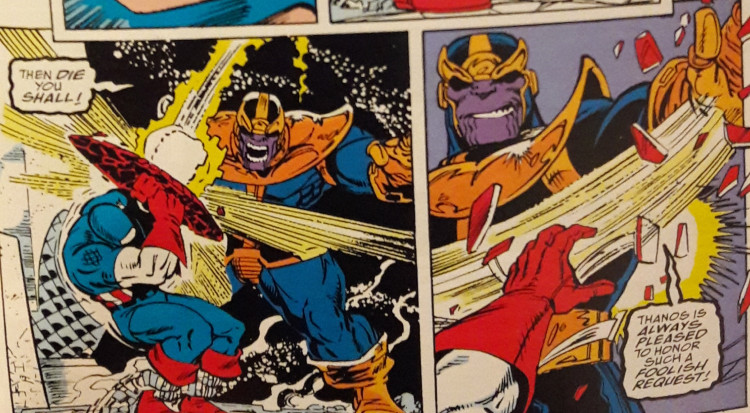 Warlock becomes a key player in this entire fracas, with the golden guardian of good (or is that the Sentry?) essentially manipulating our heroes into their frontal assault. His ploys simmer neatly in the background, allowing the combat to take on a clever new meaning as other plans come to fruition. As the series continues, so do the cosmic stakes escalate. An entire universe is at stake, but Starlin’s masterful usage of his build-up and execution of Warlock’s plan strengthens any reader’s suspension of disbelief. You can clearly soak in the sheer horror of Thanos’ universal threat and the definitive possibility that, if the Mad Titan isn’t stopped, it won’t just be half a universe that dies.

Much of this is due to Perez and Lim’s art. I cannot say I’m a huge Ron Lim fan–I do not have any particular qualms with his work, and his style is certainly recognizable enough (as seen in his contributions to two prior Marvel crossovers, “The Evolutionary War" and “Atlantis Attacks”). Like fellow artist John Romita Jr., you can tell a Lim-illustrated character by their eyes. And Lim certainly puts in the legwork necessary to depict a universe slowly tearing asunder. But George Perez puts so much love and detail into the earlier sequences, showcasing a world coming undone. Artistically, the book seems divided in two. There’s a gracefulness in how Perez constructs “The Snap,” and a sudden urgency immediately following Thanos’ dissolving of half of all life; yet even all this seems smaller and more personal than the later conflagration. Not that Lim isn’t detailed, nor does his work feel rushed. Each artist is simply tasked with a different scope, and Perez admirably focuses on the post-"Snap" environment while Lim provides a fight for the ages in the second half. 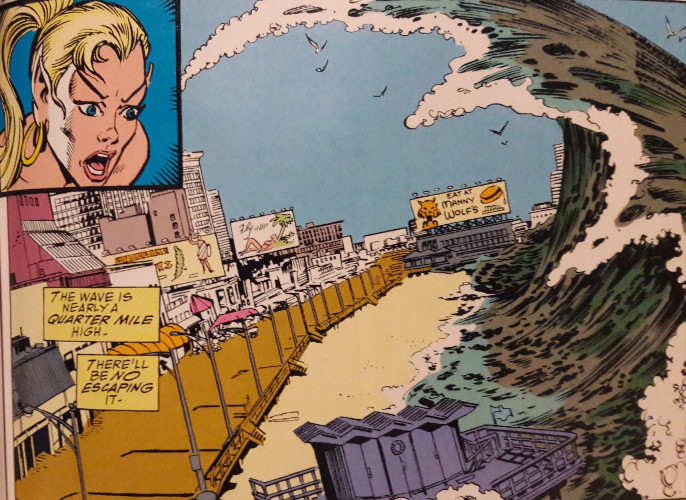 Is it a spoiler to say the universe is restored by story’s end? Much like its MCU counterpart (in this case, Avengers: Endgame), Infinity Gauntlet lets the universe breathe a sigh of relief as the stolen half of all existence is returned to its status quo. Death’s temporary gain is turned over, and the Mad Titan is left to dwell on his latest routing in a string of humiliating defeats. But if Greek mythology has taught us anything, what else is a Titan to do but be supplanted by the gods and heroes who come after?

Starlin, Lim and Perez, with this series, undoubtedly prove the effectiveness and wonder of the cosmic corner of the Marvel Universe. Yes, other fantastic cosmic-centric stories existed prior to this series–“The Coming of Galactus,” “The Dark Phoenix Saga,” “The Death of Captain Marvel,” “The Magus Saga,” even Secret Wars–and I can’t say Gauntlet obliterates them like some kinda Big Bang. All the listed stories possess great merit, many for similar reasons. Strong casts, great art, conflicts which shake the heavens and concern the physical embodiments of intangible concepts. Gauntlet simply takes that scope and ramps it up to the nth degree, and though such a premise could boggle the mind and push your suspension to the farthest reaches of darkest space, Starlin and his artists effectively intertwine their massive story with beautiful characterization. A villainous god seeking love. Heroes seeking restoration. And the collision which occurs when corrupt godhood meets the fierce courage of mortal men.