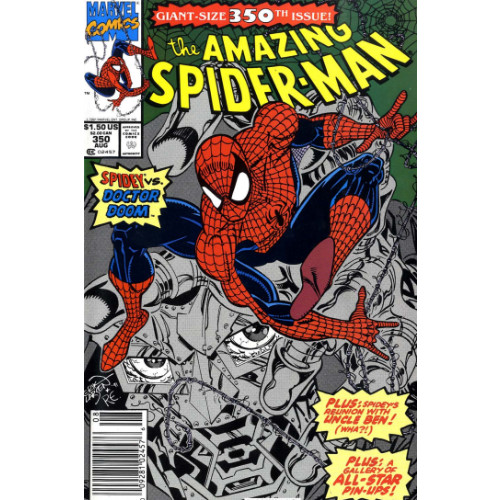 I’ve commented on a couple of these “divide by 50”-numbered issues in “Spider-view” before, these occasionally larger issues dedicated to big, important, or simply fun narratives. Sometimes a fun one-and-done, other times the climactic chapter of a larger saga. Marvel Team-Up’s 150th (and final) issue featured Spidey and the X-Men against two villains with the power of the Juggernaut; Peter Parker, the Spectacular Spider-Man #100 saw the demise of Spidey and Black Cat’s dating relationship; 50 issues later, Joe Robertson was falsely imprisoned with Tombstone for crimes he didn’t commit; and ASM #300 introduced that slithering, symbiotic arch-nemesis Venom. Big things happen in these issues, important characters are introduced, exciting events take sagas in unpredictable directions.

This anniversary narrative–told across two issues, ASM #349 and the “giant-size” (as touted by the cover) #350--plays it a little quieter. We don’t get the introduction of a new supervillain, a catastrophic falling out, or even a stupefying twist in an overarching story. What we do get is a seemingly typical Spidey adventure turned on its head part way through. As master thief the Black Fox discovers in this tale, you should never steal from a man whose literal name is “Doom.” 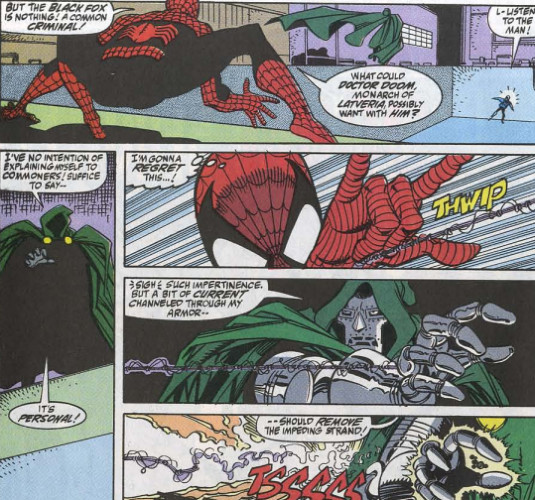 The Black Fox can never seem to pick the right jobs.

In his first appearance, this bungling burglar ran afoul of Fantastic Four enemy the Red Ghost (and, of course, his Super Apes!). Later appearances (which I did not cover) had him targeted by Silver Sable’s goons and bumping into the Prowler. Fortunately for him, a certain spider-themed superhero has always been nearby to prove the Fox isn’t the only guy with sticky fingers. Though quite bumbling for a self-described master thief, the Fox manages to slip away from our hero each time, generally because Spidey gives the old guy a pass. I mean, what harm can one, old cat burglar do, especially a septuagenarian like this dude? Sure, he’s a spry and sneaky septuagenarian, and no matter how many times he promises Spidey he’ll go straight, he always says it with his fingers crossed…but is he really that bad a guy? Scott Lang was once a career criminal, and look how he turned out!

To prepare for this write-up, I glanced back at a few of those prior appearances and was somewhat surprised to find two previous instances (one of which was written by Michelinie) where the Fox, cornered by the Spider, wins our Web-Headed pal over by playing the age card. He could never survive prison, y’know? He’s old, he’s got health issues. Sure, he can shimmy up a skyscraper like nobody’s business, but man, prison? At his age? Absurd. And Spidey, being the occasionally muddle-headed Good Samaritan he is, lets the Fox’s appeals dissuade his better judgment. 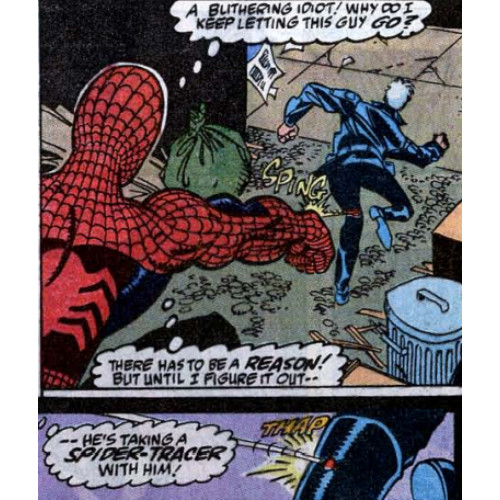 Michelinie tosses in some jumbled intuition into this two-parter to offer some clarity on the issue. He still sorta, kinda goes the “old age” route–at least, the Fox offers the same old, same old arguments for why Spidey outta let him go–but Michelinie gives a somewhat deeper reason. After rehashing the old Spidey origin (cause what’s a special issue without that little trip down memory lane?), Peter realizes the Fox reminds him of Uncle Ben. Because even if the only thing that Ben ever stole was the heart of May Parker, née Reilly, he and the Fox are both old, quasi-gentlemanly characters that Peter feels responsible for.

The connection is a nice concept, and I admire how Michelinie strives to offer a deeper reason for Spidey’s leniency towards the Fox other than the “Spare a poor old man” idea. But the logic behind it is a bit of a stretch. Other than some gray hair, I don’t see how the Fox reminds Peter of Ben outside of the age demographic, especially since it was a burglar like the Fox who killed Ben in the first place. Peter actually undergoes a brief hallucination–more on why in a minute–where he imagines discussing with Ben the Fox dilemma. Ben, mildly, basically suggests Peter does the right thing, whether the impulsive kleptomaniac reminds him of his deceased favorite relative or not. Imaginary Ben chastising Peter–more of that fabled Ben Parker wisdom–actually allows Peter closure with the situation, which is a nice touch. I’m still not sold on the “Fox/Ben” tether, but at least Michelinie doesn’t bring Ben’s ghost back to encourage Peter to let the crook slip away, as the hero has done before. 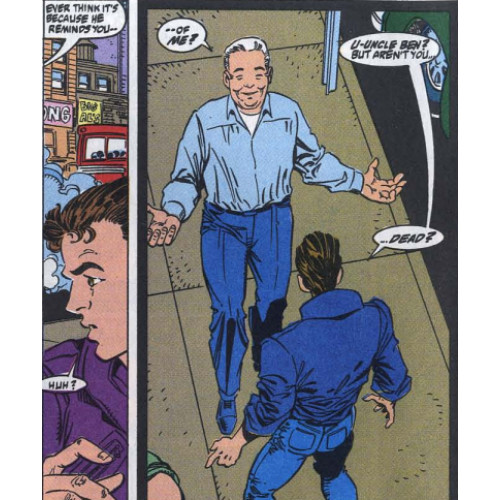 This hallucinatory conversation (not caused, btw, by Michelinie’s go-to psychedelic plot-device of choice, drugs) comes on the heels of a remarkably disastrous confrontation between Spidey and the aforementioned lord of Latveria, Doctor Doom. Last we saw the mad metal monarch, he’d been a big player during the “Acts of Vengeance” arc; before that, he attempted to wrest godlike powers from the Beyonder. Here, his aims are more personal, targeting the Fox over a pilfered prized possession. Does it seem pretty petty of Doctor Doom to leave Latveria and attack an aged adversary in person? Sure, but come on–Doctor Doom does what Doctor Doom wants to do, and the fact he personally takes a hand in hunting the Fox points to how important this bauble of his is.

It also leads to a jarring beatdown for Spidey, who gets in Doom’s way (never a good idea for anyone at any time to do). Michelinie doesn’t pull any underhanded shenanigans like revealing Doom to be a robot–this guy’s the real deal, as far as we can tell. This is the real Victor Von Doom, in all his angry, armored glory, and he mops the floor with Spidey. Typically, I’m not one to enjoy seeing Spidey receive such a pummeling–the only time such a ploy is utilized well is to showcase his ardent persistence and heroism–but Michelinie nicely plays up the tragedy of the situation. All the Web-Head wants to do is keep this old guy who reminds him of Uncle Ben safe, rap sheet or no, and Doctor Doom trounces Spidey because all he wants to do is get his property back. The battle is surprisingly personal for both combatants (again, Doom flies all the way from Europe to catch the Fox) and rages on for several, brutal pages. Erik Larson creates sequence after sequence of Spidey doing his darndest to keep Doomsie back, and the evil doctor, though not quite on par with the Juggernaut, the Rhino, or even Thanos, batters our buddy so black-and-blue, you'd think he was wearing the symbiote again.

I hyperbolize, but still... 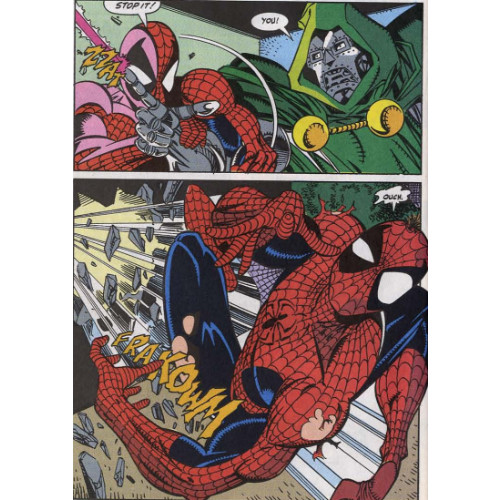 This fight occurs within the second chapter’s first half, and Michelinie attempts to make an engaging conclusion in the remaining pages. The results are mixed, as Michelinie brings back a cult first seen in a Spectacular Spider-Man issue I do not own. The group’s return may have been a welcome surprise for any reader familiar with that issue (as a continuity nut, I can relate), but for someone not aware of the group’s existence, I felt their inclusion was a tad forced. Michelinie develops a Spidey/Fox/Doom showdown against this group, as all three men have personal reasons for tearing the cult asunder. The action is fun and intense, but in terms of storytelling, the cult’s appearance feels like Michelinie cramming in an ending to his tale rather than taking the time to properly wrap it up.

One tiny note of appreciation: I’ll comment on an early sequence in this narrative between Peter and MJ, where MJ verbally addresses Peter’s recently hectic life, specifically a battle between him and Venom on an island. MJ was surprisingly distracted and uncharacteristically cold towards Peter the last issue I reviewed, and though ASM #348 focused more on the Sandman than Spidey, Michelinie failed to use Peter’s supporting cast to address recent events. I get that different writers don’t always confer with one another–I recall, a while back, commenting on Ann Nocenti’s disappointing, shoulder-shrugging reference to “Kraven’s Last Hunt” in her immediate follow-up, “Life in the Mad Dog Ward”–but we’re talking the same writer on the same book. Fortunately, this early scene addresses a narrative I felt deserved recognition and paints MJ in a better spotlight than Micheline did in ASM #348. 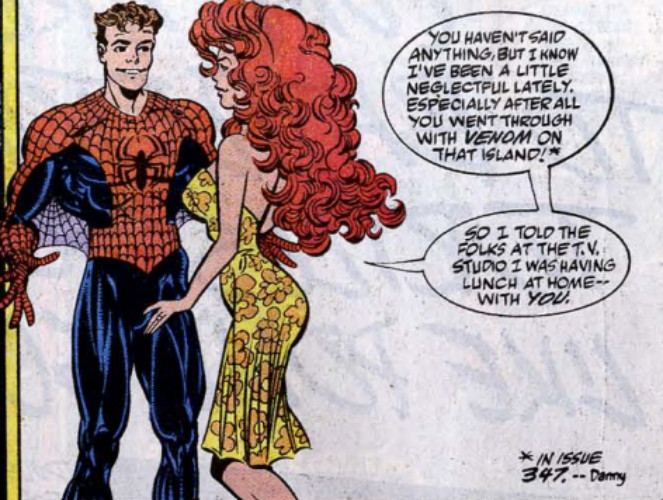 These issues aren’t anything spectacular (or would that be “amazing”?), but Michelinie seeds them with engaging scenes. The Spidey/Doom brawl is a standout moment between our two antagonists, particularly as they don’t often go toe-to-metal-toe (last time I recall the dictator personally facing our friendly neighborhood hero was ASM #5, way back in 1963). Spidey’s given a fight for his life, and Erik Larsen makes the most of the opportunity, showcasing Doom as a strategic, powerful brawler and not just a genius planner. The Black Fox/Uncle Ben connection is a bit tenuous on Michelinie’s part, but it nevertheless offers Spidey a somewhat more legitimate reason as to why he has let the crook go on several prior occasions. Elements of this two-parter end up being more enjoyable than the overall story, so give this anniversary tale a once-over if you’re looking for a puzzle where the individual pieces are somehow more interesting than the complete picture.