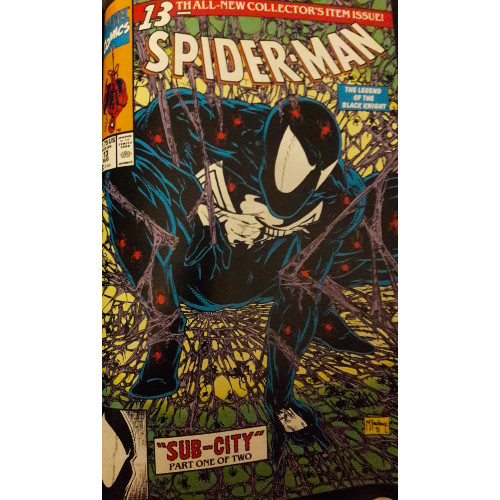 Near the upper right corner, just below the title, on the cover of the first issue of Todd McFarlane’s Spider-Man sits the blurb: “The Legend of the ArachKnight!” Or it could be “Arachknight”? Regardless, the blurb announces this confidently…and somewhat confoundingly. Initially seeing it, I assumed this was a reference to, perhaps, a backup strip included in the issue—sometimes, comic covers will crow the inclusion of a secondary story or even the appearance of a guest star. Subsequent covers during the “Torment” story arc used the same term—phrases such as “The Arachknight Returns!” and “The Arachknight Triumphant!” make me believe McFarlane, or whoever else was responsible for lettering the cover, was intentionally referencing Frank Miller’s The Dark Knight Returns, particularly as “Dark Knight Triumphant” is the title of that series’ second issue.

Several issues later, not only does McFarlane artistically ape his own Spider-Man #1 cover, with a black-clad Spidey posed precisely as previously, but he (or, again, the letterer) proudly pronounces “The Legend of the Black Knight!” to, assumedly, herald the return of Spidey’s black cloth costume. It’s meant to profoundly parallel the prior pronouncement, balancing this concept of “legends” and “knights,” associating our stalwart Web-Spinner with honor, dignity, and heroism. Instead of causing pride to swell within my heart, the boast ratcheted my confusion as I glimpsed the text box…isn’t there a “Black Knight” already in Marvel’s pantheon of powerhouses?

It’s McFarlane doing what McFarlane does best on this “Adjectiveless Spider-Man” title: seeking a melding of wit and depth, threads joined together to create a seemingly sturdy web, only to find the nest invaded by the deriding dust cloth of this reviewer’s obstinate opinions.
Into the breach once more. 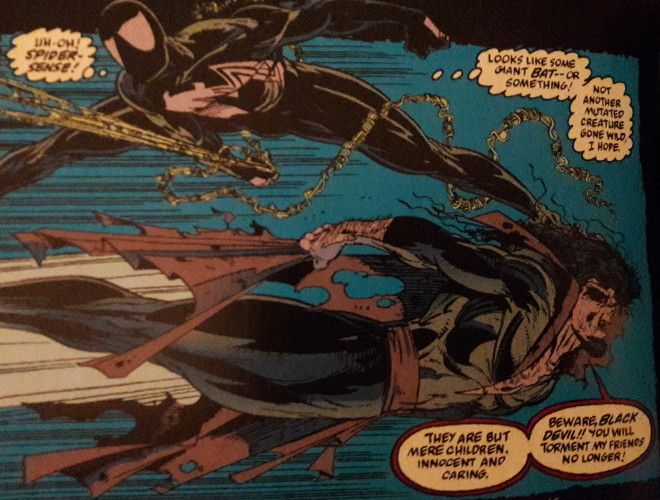 Let’s offer credit where it is due: McFarlane writes, pencils, and inks these issues, and provides lettering for the story’s first chapter. The man has a heckuva role to fill on this arc, as he has on others, and I assume it must have been a treat to have so much control over each narrative. It must have been equally as pressing, taking up so much time to painstakingly determine how each story was woven.

Not all McFarlane’s efforts have been fruitless so far. “Perceptions” was a surprisingly engaging romp through the Great White North, with McFarlane attempting to pull on thematic threads woven throughout. The attempts are somewhat clumsy (his characterization of Wolverine is questionable), but they’re far more noticeable and prevalent than in past tales. I would like to assume that McFarlane used the adequate space provided (five issues) to craft a compelling arc.

Which is perhaps one reason “Sub-City” doesn’t work quite as well. 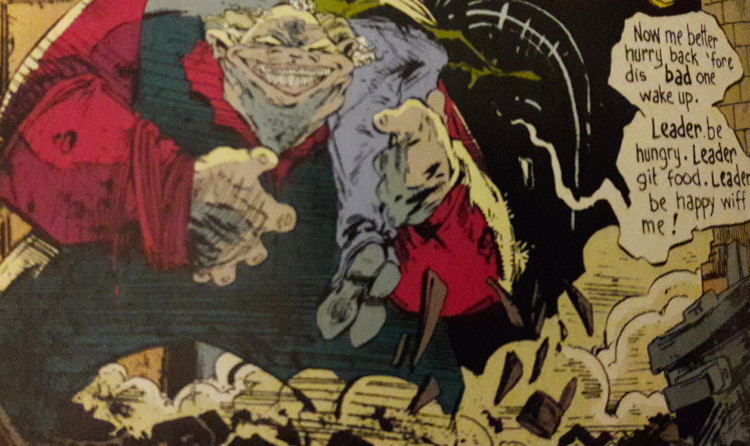 We are launched into a two-issue tale that sees Spidey investigating the disappearances of several homeless individuals (consistently referred to as “bums” in an unintentionally derogatory manner). His investigation leads him into conflict with a group of underground-dwelling people led by a mysterious leader. A rather morbid fellow, we’ll say.

The tale fashions itself in typical Spidey-story manner—no frills, just thrills. We aren’t given an in-depth analysis of any characters, no heroes for Spidey to bounce banter off of (or cross proverbial swords with), and action kept to a minimum until late in the game. McFarlane seems to want to ease up a little after his last, action-packed saga, and sure, he can use this as a breather. We’re not given anything fancy and surprises are limited.

And the narrative, generally, lives up to what I’ve come to expect of McFarlane. The man is, as I’ve discussed previously, an artist foremost. His skill lies in the intricate lattice-work of Spidey’s webs, the detailed, realistic backgrounds he constructs, the faces he illustrates. I was just reading a Reddit thread earlier on Frank Cho, specifically about how all his faces, particularly for female characters, look exactly the same. The same certainly cannot be said for McFarlane. Each character is distinct, different, unique, from Peter, to Mary Jane, to a mountain of a man named Keever, to a hapless Daily Bugle reporter named Carl. 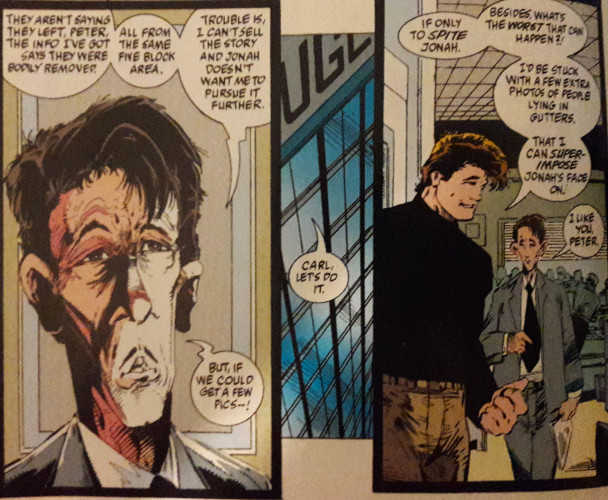 But in terms of story and dialogue, what needs to be said that I haven’t stated already? McFarlane lacks the ability to weave amusing quips or clever one-liners. His fist-pumping statements are cliche. There aren’t any clever tricks or concepts like he tried in “Perceptions” by voicing his story through the mouth of a secondary character. Like in other stories, McFarlane brings in ideas which should be interesting but falter during execution—look no further than “Masques” to see hints of religious allegory that could have worked thematically if they weren’t so blunt. “Sub-City,” like its predecessors, lacks the finesse to navigate these elements thoroughly.

The introduction of a society of individuals living beneath New York City, in caverns or in the sewers, is not foreign to comics. Frank Miller introduced a group during his run on Daredevil. McFarlane specifically references the Morlocks, a group of subterranean-dwelling mutants Chris Claremont introduced early in his run who featured heavily during the later “Mutant Massacre” arc. McFarlane’s use of these “Subhumans” feels similar—people driven down into the darkness, hidden away from the prying eyes of regular society, shunned for one reason or another. But Claremont had mutated genetics on his side, stirring in the oft-used “humans vs. mutants” conflict the X-Men are so famous for to explain why an entire group of people would choose to live underground. McFarlane indicates his “Subhumans” were just homeless folks who moved underground; one character comments how they “took to the abandoned subways and tunnels because the government wouldn’t help us on the streets,” which is about the only backstory we receive. “Subhuman” is, I suppose, intended to be a play on words, as these people are considered less-than-human and also moved to a subterranean “city,” as the story’s title implies. The notion is clever, but the double-pronged idea is never given much weight beyond a single line of dialogue. 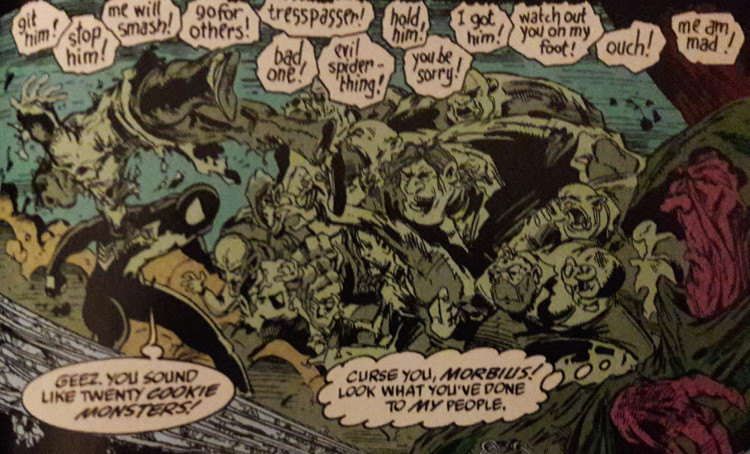 The same can be said for McFarlane’s use of Spidey’s black-cloth costume. Originally sewn by Felicia Hardy, back when the Black Cat was Spidey’s girlfriend, the costume was meant to replace the Webbed-Wonder’s symbiote outfit, which Spidey discarded after learning it was attempting to bond with him; Spidey initially rejected Felicia’s gift outright, but he kept the suit (when and why he made that decision, I’m not sure) and used it periodically—you can see it pop up in stories such as “Kraven’s Last Hunt,” Spidey’s first scuffle with Venom (also a McFarlane-illustrated issue!), “The Death of Jean DeWolff” (and its sequel), Peter and MJ’s wedding and honeymoon, and fights against Arno Stark, Warlock of the New Mutants, an Iron Man rip-off, some of Silver Sable’s hired goons, and a biker dude named Ace (twice).

So, for whatever reason, the garb was used sporadically, and again, I’m not sure what made some writers use the black suit vs. the classic red-and-blues. After being scared half to death by Venom, however, MJ forbade Peter from wearing it—he even burned the outfit at the end of ASM #300. I originally assumed McFarlane made an error by bringing the costume back, having forgotten he illustrated Peter destroying the costume three years before. But, nope, he inserts a sneaky little line about the Fantastic Four’s “seamstress” sewing Peter a new costume—I have no idea who that is (presumably either an established character or just a lady who tailors with unstable molecules), but McFarlane at least clears up a potentially awkward slip-up.

But I’m more interested in the narrative foibles than missed continuity errors. 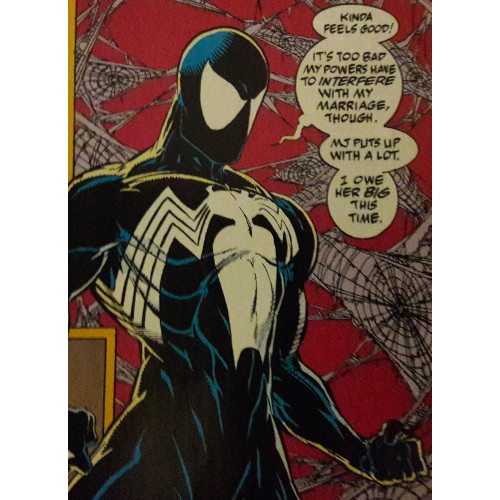 McFarlane tries to craft brief conflict between Peter and MJ—Peter insists on the additional security provided by sneaking around the dark in a black outfit, and MJ pulls out the “Remember when Venom hurt me?” card. The squabble doesn’t last for long, but it points to the surface-level manner in which McFarlane treats these characters. The two bicker for a couple of panels before coming to some kinda quasi-mutual understanding, with MJ primarily surrendering to Peter’s needs; even when Peter offers an alternate suggestion, she dismisses it, telling him to go along with his original plan…which is what McFarlane probably planned for from the start, so where else was this going to go? The whole sequence reveals nothing new about our characters nor offers any particularly interesting insight.

To be fair: MJ’s argument is solid…mostly. I do appreciate McFarlane’s willingness to unpack some of the emotional fallout from Venom’s first appearance, and I think MJ’s concern for the costume is valid. But MJ ends their argument by telling Peter he can wear the suit and just not let her see it, which I personally think should have been the solution from the beginning. 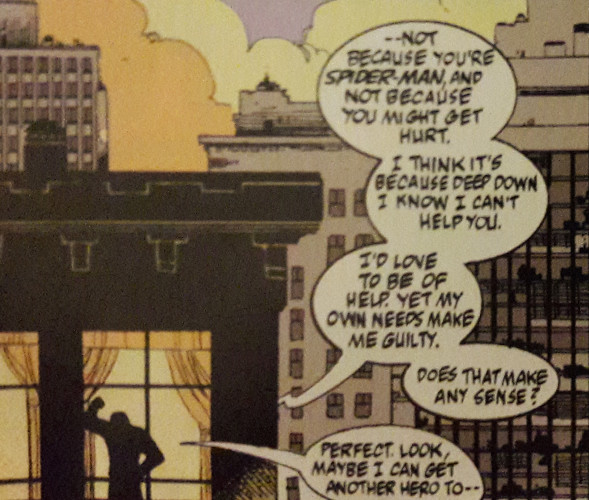 Even more frustrating: Peter’s plan doesn’t work. The Subhumans spot and tackle him almost immediately. This, unfortunately, makes the Peter/MJ argument appear even more unnecessary and drives home the fact that McFarlane just really, really wanted to illustrate the black outfit and came up with a cockamamie in-narrative reason for Peter to do so.

As I mentioned, McFarlane sits on the cusp of interesting ideas. The Peter/MJ conflict could have used additional depth, and the black costume’s inclusion could have been made more engaging. As the story winds down, McFarlane heavily uses the Subhumans’ leader as the main antagonist, a certain living vampire played by Jared Leto in one of 2022’s movies of all time. McFarlane attempts to extend the sympathetic edge Morbius has always been given, yet in doing so, he wraps in a completely last-minute, convoluted twist between Morbius and the Subhumans. Again, it’s a matter of spacing and pacing—fleshed-out, this particular twist may have worked pretty well and made Morbius’ involvement far more interesting than it is. The twist introduces an interesting ethical dilemma, but as with other aspects of this arc, it simply boils to McFarlane not allowing the necessary page space to adequately explore each individual component. There is, admittedly, a bit of amusing humor, as Spidey and Morbius fail to recognize each other initially (Spidey because he can't see well in the dark, Morbius because he's unfamiliar with the black costume), leading to some confusion before the light bulbs go off. 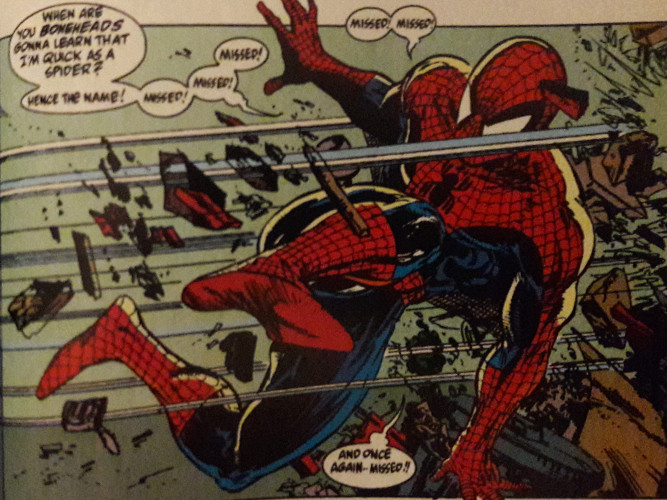 So “Sub-City” sinks a bit further, joining its predecessors in the sludge. We do get a Todd McFarlane at the top of his artistic talent, as usual. And there’s something to be said about his reliance on monsters—the Lizard, Demogoblin, Wendigo, and now Morbius. “Perceptions” showcased a McFarlane arc done right, steeped in darker themes yet given proper consideration and thoughtful theming. Two issues, sadly, does not offer McFarlane the space to toy with those themes here, especially not when he plays with a cranky couple bitterly battling over bolts of black cloth.